“I always felt if I had had a normal hand, I would have been a greater pitcher.” – Mordecai Brown

For any other pitcher, a right-hand mangled in a childhood accident might have derailed a career before it started.

But for Mordecai “Three-Fingered” Brown, the incident on a local farm became the genesis of a Hall of Fame career.

“It was a great ball, that downward curve of his,” said Ty Cobb, owner of the game’s best career batting average, of the curveball that evolved from Brown’s misshapen fingers. “I can’t talk about all of baseball, but I can say this: It was the most deceiving, the most devastating pitch I ever faced.”

Born Mordecai Peter Centennial Brown on Oct. 19, 1876 in Nyesville, Ind., Brown’s life changed when – as a five year old – he got his right index finger caught in a machine designed to separate grain from stalks and husks. The digit was sliced off, leaving only a stump. The next year, Brown damaged the hand again in a fall – breaking the remaining fingers. The bones healed, but the fingers were left at permanently odd angles.

Brown, however, showed baseball aptitude into his teen years and hooked on with semi-pro teams near his home. By 1901, Brown was dominating hitters with Terre Haute in the Three-I League. He surfaced in the big leagues with the Cardinals in 1903, but struggled to a 9-13 record while trying to harness his movement-laded pitches.

The Cubs acquired Brown following the 1903 season, and the next year – at the age of 27 – Brown found success with a 15-10 record and 1.86 earned-run average. Over the next seven seasons, Brown averaged almost 24 wins a season while leading the Cubs to the World Series title in 1907 and 1908. In 1906, Brown posted a 1.04 ERA for a Cubs team that won a record 116 games – the lowest National League figure of the modern era among qualifying pitchers.

In 1908, Brown won the replayed game against the Giants following the “Merkle Boner” game, giving the Cubs the pennant. In nine career World Series games, Brown was 5-4 with a 2.97 ERA.

He pitched for the Cubs through 1912 before moving to Cincinnati. Brown then jumped to the upstart Federal League in for the 1914 and 1915 seasons before ending his career back with the Cubs in 1916. 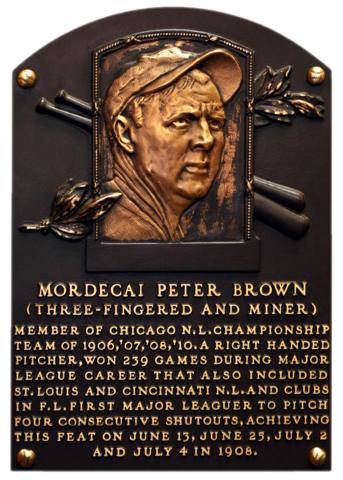 that on Sept. 4, 1916, Mordecai "Three-Fingered" Brown and Christy Mathewson faced each other in what turned out to be the final game of both their Hall of Fame careers?

""Miner" Brown is one of the greatest pitchers in the history of baseball, and a remarkable fielder at all times. "
Ty Cobb

A rivalry that stretched over 12 years, there was never a shortage of drama – and dominant pitching.
Explore more Inductees