Hilton Smith is sometimes referred to as the forgotten star of the Negro Leagues, a pitcher whose exceptional career is often overshadowed by longtime teammate Satchel Paige.

In fact, when the two were with the Kansas City Monarchs, Smith was often called upon to relieve the lanky fireballer after Paige had tossed his obligatory few innings for the adoring fans. But according to many who faced them, Smith was the equal of Paige.

Negro Leagues historian Bob Kendrick once said of the two: “The old-timers would all say that if you were going to hit anything, you better hit it off Satchel because you weren’t going to touch Hilton Smith.”

This sentiment was shared by many of the players who were contemporaries of the pair. Fellow Hall of Famer Monte Irvin, who played in both the Negro Leagues and big leagues, said: “He (Smith) had one of the finest curveballs I ever had the displeasure to try and hit. His curveball fell off the table. Sometimes you knew where it would be coming from, but you still couldn’t hit it because it was that sharp. He was just as tough as Satchel was.”

An exasperated Roy Campanella, another future Hall of Famer, once said of Smith and Paige: “My God. You couldn’t tell the difference.”

According to Negro Leagues star Sammy T. Hughes: “Smith had an excellent curveball in addition to his fast one. And I’d rather face Satchel or anybody who throws the ball hard rather than face a curveball. Because then you’ve got two pitches to think about.”

Born Feb. 27, 1907, in Giddings, Texas, Smith enrolled at Prairie View A&M following high school and pitched for the university's baseball team. After two years, he left college for the chance to play professionally in the "minor leagues" of African-American baseball before landing with the Monarchs in 1937.

Because Paige was often called on to pitch nearly every day to draw crowds, he would work an inning or two before Smith came on in relief.

Smith posted a 66-35 record in 13 seasons. Smith was also an accomplished hitter, posting a .290 batting average. 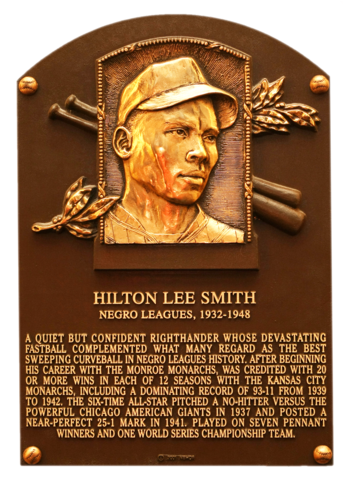 "His curveball fell of the table. Sometimes you knew where it would be coming from, but you still couldn’t hit it because it was that sharp. "
Monte Irvin

On May 16, 1937, future Hall of Famer Hilton Smith threw a no-hitter for the Kansas City Monarchs.
Explore more Inductees