A lawyer by trade, Bowie Kuhn went from working the scoreboard at Washington's Griffith Stadium as a teenager to becoming Major League Baseball's fifth commissioner in 1969.

After working for the Senators for $1 a day as a boy, Kuhn served more than a decade as a legal counselor for the National League before he was chosen to succeed William Eckert as commissioner. Though he was given a one-year interim term, Kuhn quickly showed his skills when he successfully negotiated a dispute with the players’ union over pension funds.

Kuhn’s tenure was marked by several periods of labor strife, most notably when star outfielder Curt Flood argued that baseball’s reserve clause violated federal antitrust law. Kuhn opposed Flood and won in the Supreme Court to maintain the reserve clause, but the case laid the foundation for the eventual adoption of free agency.

Baseball would see player strikes take place in 1972 and 1981, but Kuhn stood firm and ensured that the World Series was played in each of those seasons.

Despite the turbulent relations between players and management during the 1970s, Kuhn won the favor of many when he pushed for the inclusion of Negro League players in the Baseball Hall of Fame. In 1971, Kuhn and the Hall of Fame created a committee to select players who had been at least 10-year veterans of the Negro Leagues. The committee went on to induct many deserving African-American players, including Satchel Paige, Josh Gibson and Cool Papa Bell.

During Kuhn’s first year in office, MLB set up expansion franchises in Montreal, Seattle, San Diego and Kansas City. Both the National and American Leagues were split into divisions, and the first League Championship Series games were played in October 1969. In 1971, Kuhn introduced night games to the World Series.

Kuhn remained in the commissioner’s office until 1984, ending an era that saw unprecedented growth in the game. Between 1969, when Kuhn took office, and 1980, the league’s total attendance tripled and television revenue increased by more than $10 million.

Upon leaving office, Kuhn offered advice for his successor, Peter Ueberroth, in a column for The New York Times in which he wrote: “He should use his powers fearlessly to protect the integrity of the game. The critics will call him self-righteous and moralistic. Have courage. Ignore them.”

Kuhn continued to practice law and serve as a consultant until his passing on March 15, 2007. The following year, Kuhn became the fourth commissioner to be inducted into the Hall of Fame. 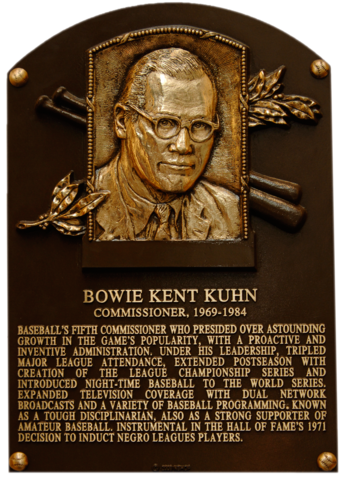 that Bowie Kuhn operated the scoreboard at Washington's Griffith Stadium as a teenager?

"I believe in the Rip Van Winkle Theory: that a man from 1910 must be able to wake up after being asleep for 70 years, walk into a ballpark and understand baseball perfectly. "
Bowie Kuhn