Lee MacPhail grew up watching his father become a Hall of Fame executive in Major League Baseball. He wanted to do the same, despite his father’s warnings against it.

“Since my dad (Larry MacPhail) was in baseball, I grew up in the game and it never occurred to me I wouldn’t be going into it after college,” he said.

Born on Oct. 25, 1917, MacPhail began his career as an executive in 1941 as business manager for the minor league team in Reading, Pa. He served as general manager in the International League for Toronto from 1942-43 and – after a tour of military service – was named general manager of the Yankees Triple-A farm team in Kansas City in 1946.

His first big league experience came as director of player personnel for the Yankees from 1948-58. During this time, MacPhail emphasized a strong farm system and helped the club win nine pennants and seven World Championships.

MacPhail had a much different personality than his father. Where his father was dynamic, demanding and innovative, the younger MacPhail was conservative, gentle and gracious.

“Unfortunately, a person with Dad’s talent comes along only once every 50 years,” MacPhail said. “I’ve never thought of imitating him.”

But his father recognized that there is more than one way to get the job done.

“He puts on a sad face and everybody he talks to feels sorry for him and gives him a ballplayer,” said Larry MacPhail. “And if the victim doesn't come across right away, Lee does not leave until he gets what he is after, see? He is persistent. He gets his man.”

Following his tenure in New York, MacPhail joined the Baltimore Orioles as president and general manager from 1958 to 1965, building the team that won the 1966 World Series. He took a position as chief administrative assistant to Commissioner of Baseball William D. Eckert in November of 1965 and was named Major League Executive of the Year by the Sporting News in 1966.

“This (MacPhail) is a highly-knowledgeable baseball man endowed with sound judgment, a vast capacity for work, a consuming interest in the game and an incredibly even disposition,” said Sporting News reporter Doug Brown.

MacPhail returned to the Yankees to serve as executive vice president and general manager before becoming AL President from 1974-83. Under this title, MacPhail contributed to successful negations in an agreement over free agency, worked to create a settlement during the 1981 work stoppage and established cooperation between the two leagues. He later served as president of the Major League Player Relations Committee from 1984-85. 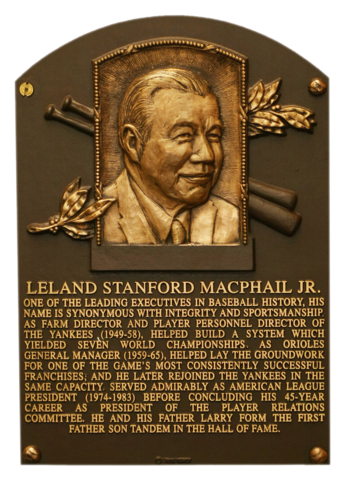 "He puts on a sad face and everybody he talks to feels sorry for him and gives him a ballplayer. And if the victim doesn't come across right away, Lee does not leave until he gets what he is after, see? He is persistent. He gets his man. "
Larry MacPhail