Dick Williams was a solid big league player at a number of spots across the diamond during his 13-year playing career.

But in the dugout as a manager, Williams would earn his spot among baseball’s immortals.

Williams proved to be one of baseball’s best managers at turning losing teams into winners. It all started at the age of 37 in 1967 when he took over the Boston Red Sox, a team that had finished ninth in the 10-team American League the previous season. Not much was expected of the Sox, but Williams led them to 92 wins in one of the most spirited pennant chases in league history. The season was dubbed "The Impossible Dream" – with Boston coming within one win of the World Series title. It marked the re-ignition of the town's love affair with the team.

"We didn't know how to study the game," explained Red Sox first baseman George Scott. "Dick Showed us how to do it. He pressed the right buttons for everyone on that team."

Williams was dismissed late in the 1969 season and spent 1970 on Gene Mauch's staff with the Montreal Expos. In 1971, Williams took over the Oakland Athletics after their second place finish in 1970 and led them to the American League West title. He followed that up with two straight World Series championships, which prompted A’s owner Charlie Finley to proclaim: “Dick Williams is the best manager I've ever had. I ought to know. I've fired enough of them.”

Finley wasn’t the only owner enamored with Williams. Yankee owner George Steinbrenner thought so much of Williams, he tried to hire him twice, unsuccessfully: Once after he had a falling out with Finley and Finley wouldn’t let him out of his contract, and once again after the tragic death of Billy Martin in 1989, at which point Williams declared himself “too old to manage again.”

Williams managed the Angels from 1974-76, then took over the Expos in 1977 and helped Montreal become one of the National League's top teams. He was dismissed late in the 1981 season as the Expos charged to the postseason, advancing to the NLCS under new manager Jim Fanning.

Williams landed in San Diego in 1982 – and by 1984 led the Padres to their first National League pennant. He left the Padres prior to the 1986 season and soon found himself in Seattle, where he managed the Mariners until early in the 1988 season. 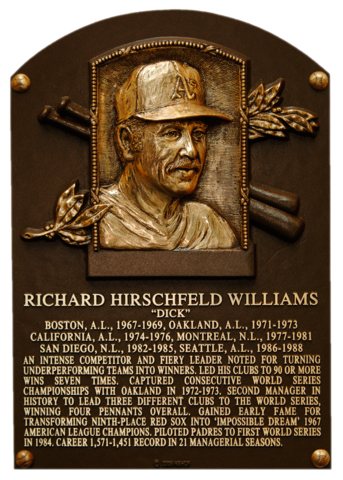 that Dick Williams, in his rookie year as a manager with the Red Sox in 1967, led Boston to first place in the AL after the Sox finished in ninth the year before?

"He got rid of all the individuality, made us into a team, gave us an incentive and made us want to win. "
Carl Yastrzemski 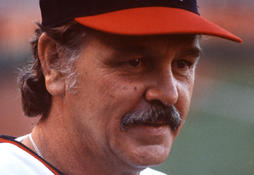 Following his resignation from the A's in 1973, Dick Williams was hired by the Yankees before the American League ruled he could not manage the team.
Explore more Inductees