On March 18, 1953, Braves owner Lou Perini changed that when he took his team to Milwaukee.

Rumors swirled throughout that winter that Perini was intent on moving the Braves, who had fallen behind the Red Sox in Boston’s baseball pecking order. The Braves drew just 281,278 fans in 1952, less than a third of their attendance in 1950 and more than 800,000 fewer fans than the Red Sox.

“We had made up our mind that, regardless of if we had won the pennant (in 1952), we would go to Milwaukee next year,” Perini told The Boston Globe after the move was announced. “We finished out of the first division only once since 1948 and our attendance fell to 281,000.”

Perini paid the American Association $50,000 to transfer the Milwaukee Brewers – then the Braves’ Triple-A team –to Toledo, Ohio, and the other seven National League teams voted unanimously to allow Perini to move the Braves. 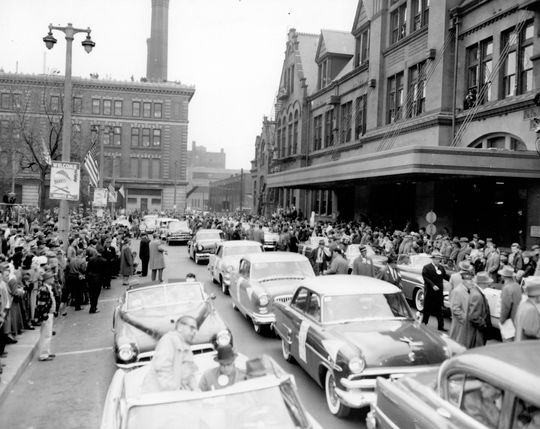 A welcome ceremony for the Milwaukee Braves in 1953. (National Baseball Hall of Fame and Museum)

“The affection and fine standing of Perini which is held by these men was a big factor,” National League president Warren Giles told the Globe. “It was a good, clean transaction. We expect no litigation of any kind from anyone.”

Meanwhile, fans in Milwaukee rejoiced as big league baseball returned to Wisconsin for the first time since 1901 when the Brewers, a charter member of the American League, finished last with a record of 48-89. The next season, that franchise became the St. Louis Browns. 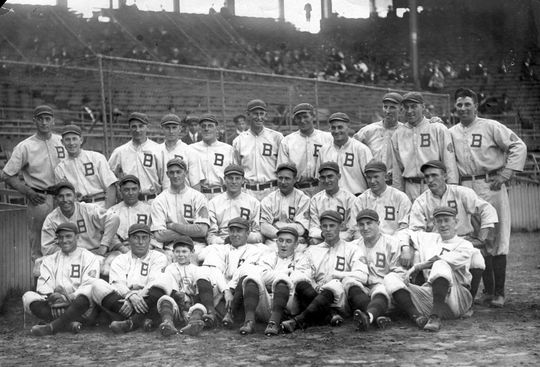 The Braves’ time in Boston was highlighted by the 1914 team, which won the National League pennant and became known as the “Miracle Braves.” (National Baseball Hall of Fame and Museum)

“This can set up a chain reaction,” Dodgers president Walter O’Malley told the Associated Press following the Braves’ move. “You’ll see more territory being drafted than you can shake a stick at.”

O’Malley proved prescient as the Browns moved to Baltimore in 1954 and the Athletics moved from Philadelphia to Kansas City a year later. Then in 1958, O’Malley took the Dodgers to Los Angeles – with the Giants moving to San Francisco the same year.

Suddenly, change was the norm for the National Pastime.

“The country has changed in the last 75 years,” Perini told the AP. “You can’t deny Los Angeles and San Francisco are major league in every respect. And so are Montreal, Baltimore and some other cities. A third major league is the only answer for the future.”

Perini’s last prediction did not come true, but his vision for expansion did as the 16 teams in 1953 mushroomed to today’s 30 clubs.

Four weeks after Perini announced the move, the Braves opened their 1953 home season in front of 34,357 fans at County Stadium in a 3-2 win over the Cardinals. The attendance represented more than 12 percent of the Braves total customers in 1952.

Milwaukee would go on to host more than 1.8 million fans at County Stadium in 1953.