Field of Dreams in Cooperstown

One of the stars of Field of Dreams, considered by many one of the greatest baseball films ever made, made the pilgrimage to baseball’s home on April 15.

Actor Frank Whaley, a recognizable name and face today after appearing in Pulp Fiction (1994), The Doors (1991), Born on the Fourth of July (1989) and Swimming with Sharks (1994), played the young Archie “Moonlight” Graham in the iconic 1989 movie Field of Dreams. Accompanied by wife Heather, 13-year-old son Buster and 11-year-old daughter Tallulah, he toured the National Baseball Hall of Fame and Museum for the second time in his life.

“I’ve been meaning to bring my kids. I’ve always wanted them to come and see the Museum here,” said Whaley during an interview on the Museum’s second floor. “I came here when I was around 10 on a school trip and I always remembered how interesting it was, even if you’re not so much a baseball fan. It’s a great history lesson about this country.

“I remember getting on a bus in elementary school with the class and coming here. I actually still have a little baseball bat souvenir.”

Whaley’s visit also coincided with the 68th anniversary of Jackie Robinson breaking the major league color barrier when he made his 1947 debut with the Brooklyn Dodgers.

“And it’s Jackie Robinson Day, so it’s really kind of a cool day that we got to come,” Whaley said. “The significance of that, to be able to show my young kids that, is really cool.” 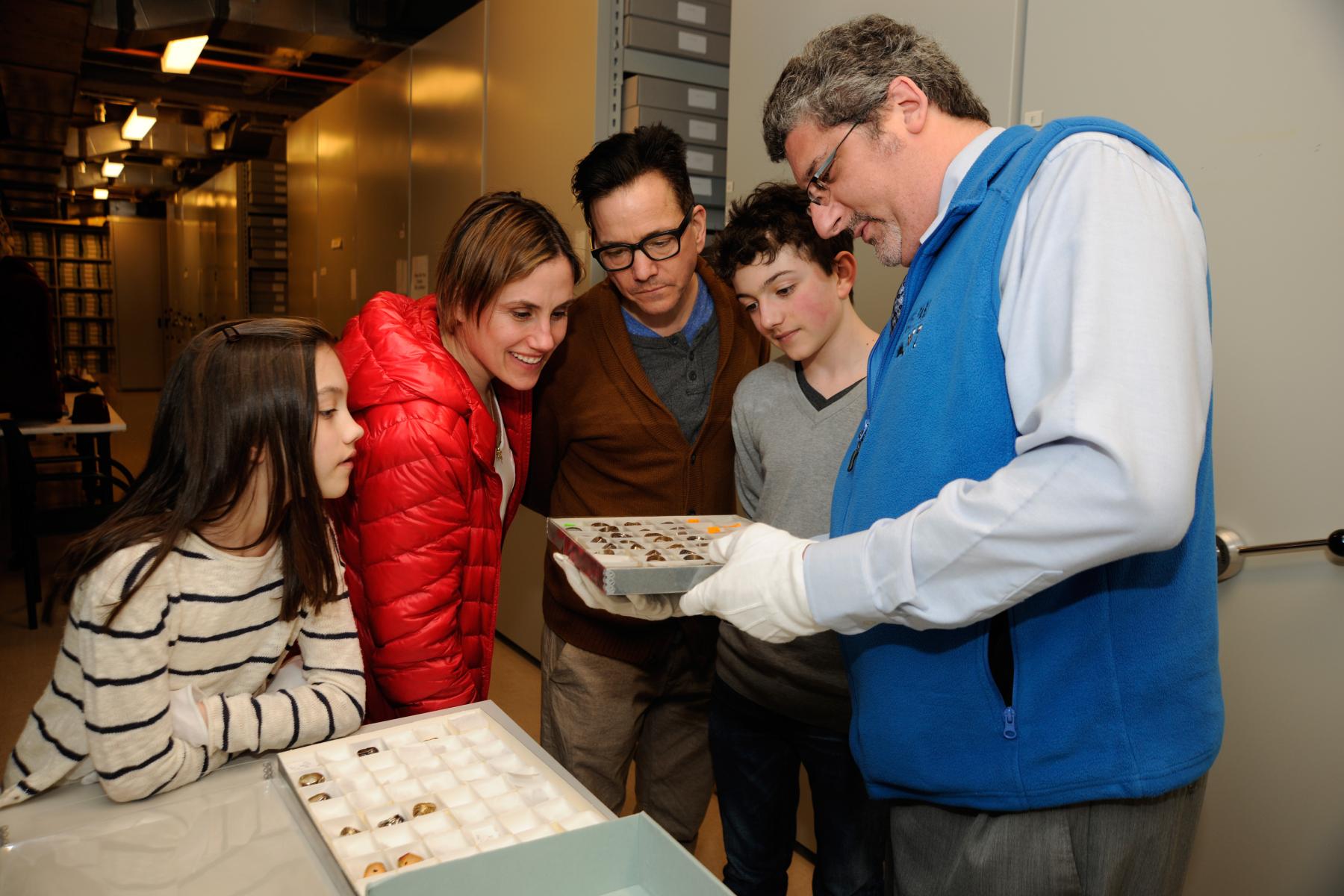 Whaley has Upstate New York roots, having been born and raised in Syracuse. This trip, which corresponded with his children’s spring break, was a stop along the way after visiting family in the area and before heading to their home in Connecticut.

“When I was a kid, I was an obsessive baseball fan growing up in the ‘70s,” Whaley said. “Even though I grew up in Upstate New York, for some reason I became a Detroit Tigers fan. I have no idea how that happened, but I knew every single player. And in those days they remained a member of a team much longer so I felt like I had a relationship with every one of those guys from Aurelio Rodriguez – he was my favorite – to Mark Fidrych. And I loved Sparky Anderson.”

When the Whaley family was given a tour of the Museum’s collection storage area, their guide, Hall of Fame Vice President of Exhibitions and Collections Erik Strohl, made sure to show Detroit fan a number of Tigers artifacts, including a Ty Cobb sweater and a trio of Anderson caps.

“When I was a kid it seemed like the Tigers always finished dead last so it was constant heartbreak,” Whaley said. “And there was no ESPN so I had to wait until for the 11 p.m. news to see if they won. They never won.”

While the Tigers struggled during Whaley’s childhood, the actor hit a homer when he was cast in Field of Dreams, the story of an Iowa corm farmer’s search, guided by voices, for reconciliation.

“I had made three or four movies up to that point and I was kind of making my way into my career and I was just so happy to be in that company with Burt Lancaster, James Earl Jones and Kevin Costner,” Whaley said. “We would spend all day on this baseball field in Dyersville, Iowa, which was so cool, and we all hung out together.”

In Field of Dreams, Whaley portrays Graham, an actual big league ballplayer whose big league playing career consisted of a single 1905 game with the New York Giants. Lancaster portrayed the much older Graham, who became a doctor after he left the diamond.

“I was there for a couple of months and it was a real blast to put on this old-timey baseball outfit every day. It was a great time for me. It’s something that I’ll always remember, that summer,” Whaley said. “The great thing was they put us through this rigorous baseball training camp. Even though I only swung the bat in one scene, they wanted everything to look authentic. I was 25 years old, and here I was not only fulfilling my fantasy about becoming an actor but also my fantasy about being a baseball player.”

According to Whaley, playing baseball was something he did constantly as a youth.

“I was the kind of kid who would throw a tennis ball on the side of our house’s peaked roof. All day I’d throw the ball to the top of the roof and catch it when it rolled down,” Whaley said. “I was a quintessential baseball kid when I was younger.”

When Field of Dreams was released in theaters, Whaley was initially surprised at the positive reaction it received but today understands its draw to fans.

“It’s one of those things that people like to go back to every year, but at the time I had no idea. I didn’t have any expectation of anything,” Whaley said. “I was kind of just surfing and then when it did come out and it received all this acclaim and nominated for best picture at the Academy Awards it was quite amazing. I remember going to the big Hollywood premiere event and that’s when it kind of hit me.”

“The Natural is such a great movie. It’s so beautiful and it’s so compelling,” he said.

“Roy Hobbs is such a great hero. And Robert Redford is probably the last great movie star. It’s unforgettable when he hits that home run with the blood on his jersey and the lights. Obviously, I have a special feeling for Field of Dreams but for me The Natural is really it.”

Besides acting, Whaley has also written and directed a number of movies over the years. As a filmmaker, he went back to his childhood when the question arose as to any baseball subject he could imagine himself one day turning into a silver screen project.

“There might be a great Mark ‘The Bird’ Fidrych movie. He was a pretty amazing guy,” Whaley said. “He came in like a firecracker and then he kind of faded away, but while he played he was really one of a kind. He was one of those guys that were really of their own brand. That’s one of those things that is sadly missing from sports today, those kind of characters who had a real aura about them.”

Whaley’s most recent film project, which he wrote and directed, is called Like Sunday, Like Rain. Released in theaters last month, it stars Leighton Meester, Debra Messing and Billie Joe Armstrong (from the rock band Green Day). It will be coming to video on demand and DVD on April 21. The busy actor will appear later this year in Monster Trucks (he plays a non-truck), which has a Christmas Day release date.

“Acting and directing, it’s about 50/50,” Whaley said. “I direct films that I write, I’ve also moved into television directing, which I do from time to time, and also act. When you have kids you kind of have to look for various way to stay busy because they’re very expensive. I keep busy doing all three – directing films, directing television and acting.” 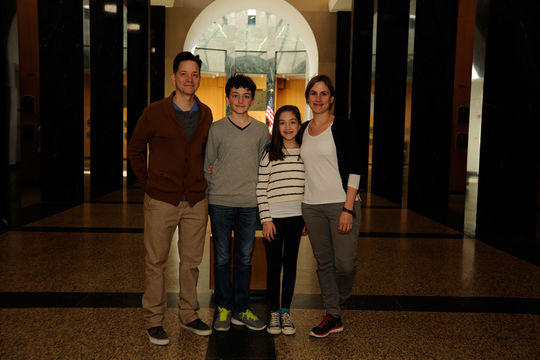 Actor Frank Whaley, who appeared as Archie Graham in the movie Field of Dreams, tours the Hall of Fame April 15 along with his wife, Heather, and children Buster and Tallulah. (Milo Stewart, Jr. / National Baseball Hall of Fame) 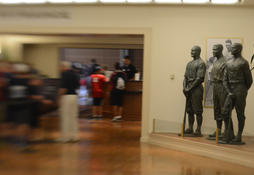