When it comes to baseball, Halloween has proven to be a “batty” time. Traditionally celebrated on October 31, the day often conjures up visions of ghosts, ghouls and goblins, but games contested on this occasion have proven terrifying to some and rewarding for others.

At a time when parties, parades and trick-or-treaters are in full swing, this year’s World Series Game 4 between the New York Mets and Kansas City Royals is scheduled for the night of October 31, at which time it will join a trio of memorable Fall Classic contests that have been decided on this date over the past 15 years.

In one of the more improbable comebacks in World Series history, in a postseason delayed due to the Sept. 11 tragedy, the New York Yankees, about to be pushed to the brink of elimination, were one out away from losing Game 4 of the 2001 Fall Classic, 3-1, and falling behind three-games-to-one to the Arizona Diamondbacks.

Instead, the Yankees’ Tino Martinez socked a two-run home run into the first row of bleachers in Yankee Stadium’s center field with two outs in the bottom of the ninth inning off of Arizona’s sidearm closer, Byung-Hyun Kim, to tie the game, 3-3. Then Derek Jeter followed suit with two outs and the bases empty in the 10th, slicing a Kim slider just inside the right-field foul pole to win it, 4-3. 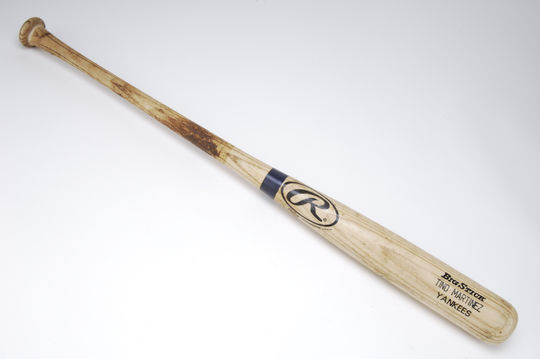 Tino Martinez of the Yankees used this bat to hit a game-tying home run in the ninth inning of Game 4 of the 2001 World Series, which was played on Oct. 31 at Yankee Stadium. It was the first-ever World Series game played on Halloween. (Milo Stewart Jr./National Baseball Hall of Fame)

“I’ve never hit a walk-off homer before; it was pretty exciting,” said Jeter, who, because his round-tripper came a few minutes into the next month was soon tagged with the nickname Mr. November. “I don’t think I hit one in Little League. That was huge.”

Jeter, who became the 12th player to end a World Series game with a home run, connected for his game-winning hit with a 3-2 count. 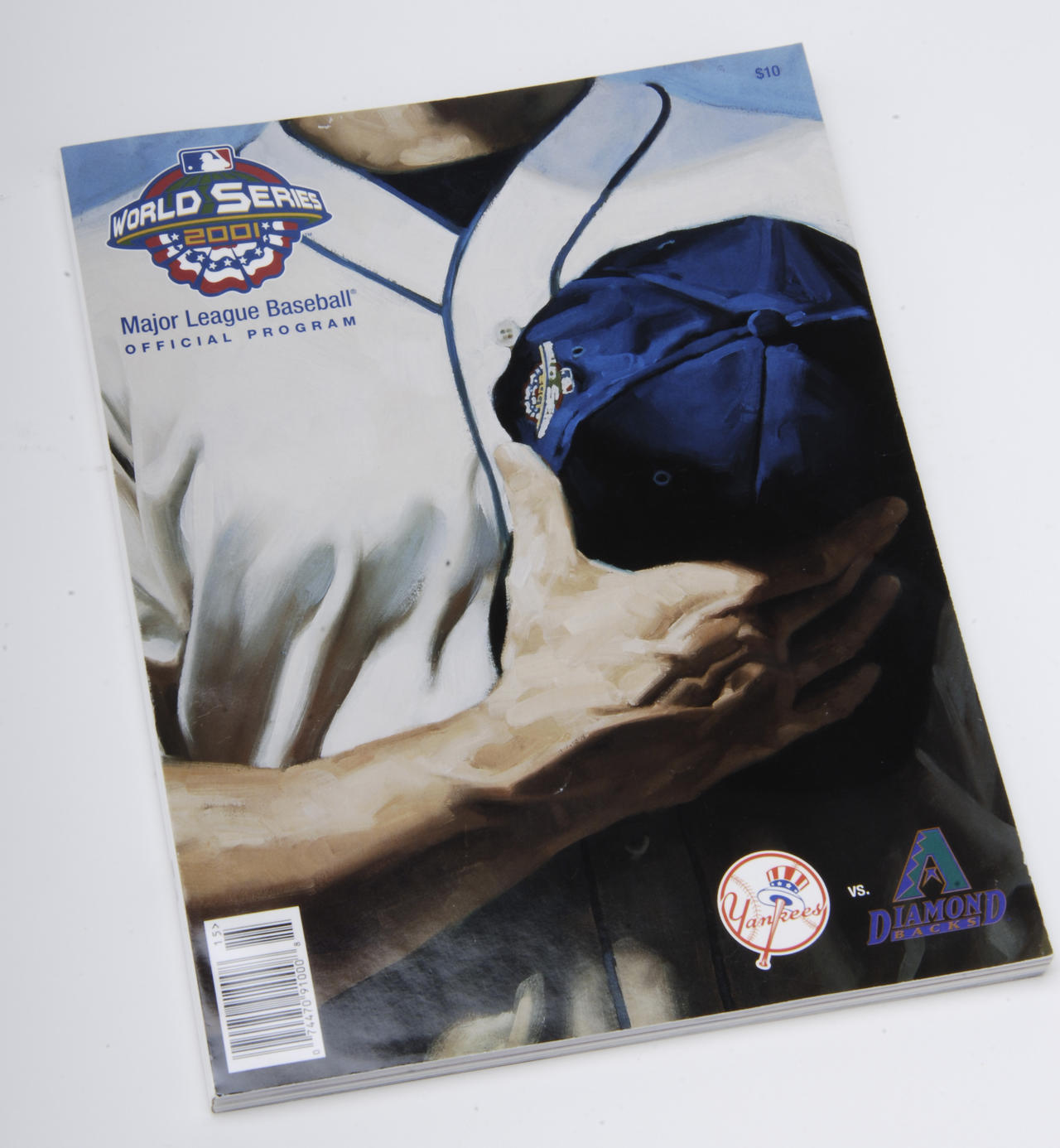 “Anytime you have someone throwing sidearm or underarm, it is going to take a few pitches to pick up his release point,” Jeter said. “In the past, we’ve never given up until the last out. We always feel we can win. It doesn’t happen all the time, but we believe it. That’s the confidence we have.

“The beauty of the postseason is that it doesn’t matter what you’ve done before because every time you come up, you’ve got a chance to do something special.”

The 22-year-old Kim, the first South Korean-born player to appear in a World Series, came on in the eighth in relief of starting pitcher Curt Schilling, who went the first seven innings, giving up three hits while striking out nine.

After striking out all three batters he faced in the eighth inning, Kim faced Martinez with two outs and Paul O’Neill on first base via a broken-bat single. One out away from putting his team one win from a World Series title, Martinez, who was 0-for-10 in the Series before the homer, connected on the first pitch he saw from Kim.

“I just saw fastballs and sliders, so I went up there looking for something to whack,” said Martinez, having explained that had watch videotape of Kim after the right-hander entered the game in the eighth inning. “I went up in that situation looking for a fastball, something in the middle of the plate to try and drive out.

“I looked for something I could turn on and take a good, strong hack at it.” 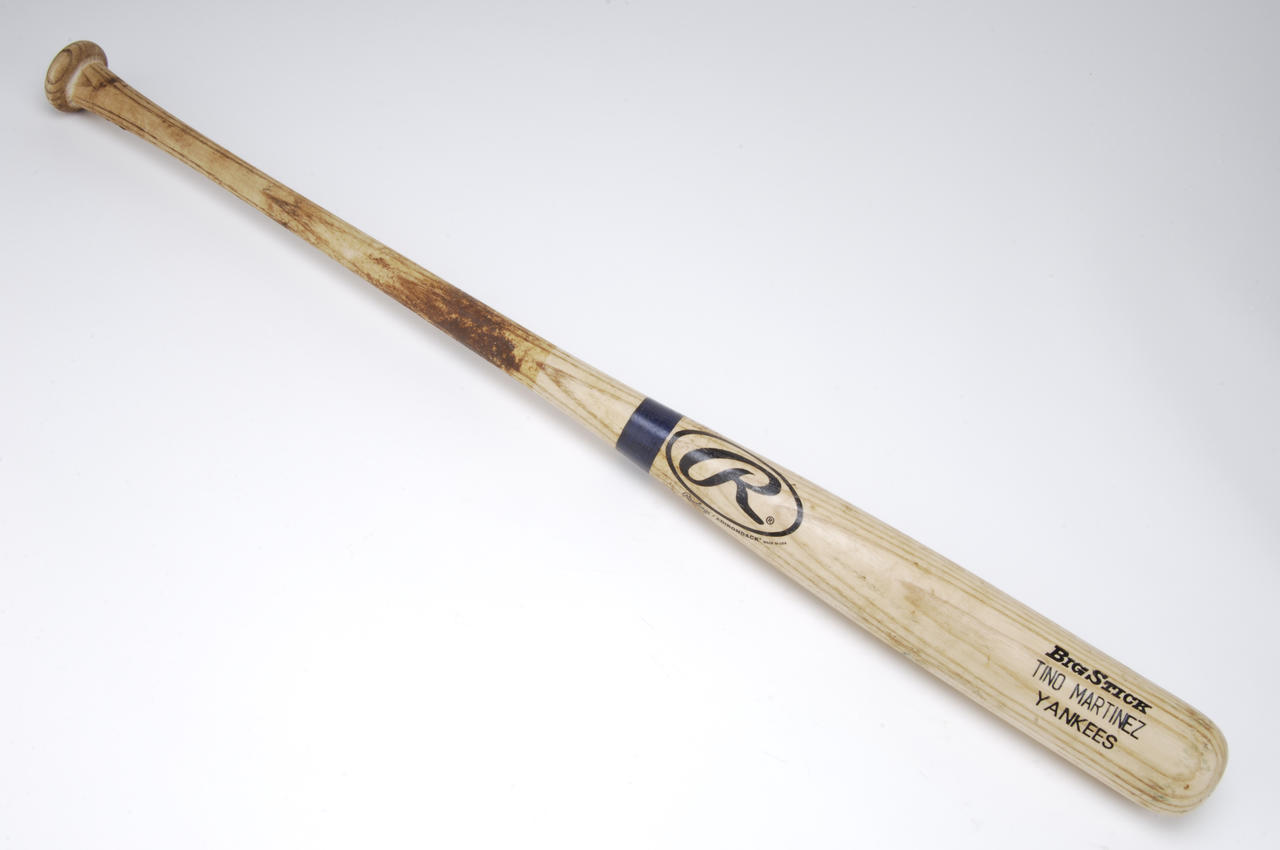 The bat used by Martinez to hit his memorable homer and the road cap worn by Schilling in the game are now part of the National Baseball Hall of Fame and Museum’s collection.

Arizona catcher Damian Miller, who was behind the plate for Martinez’s game-tying homer, said, “It seemed kind of surreal at first, like it didn’t really happen. I couldn’t believe it happened, really. It was probably the loudest place I have heard as a player, after Tino hit that home run.”

The Yankees historic comeback was the first time in World Series history that a team hit a ninth-inning homer to tie the score and followed up with a game-winning homer in extra innings. Despite the dramatics, New York, who had won three straight championships coming into 2001, fell to Arizona in a deciding Game 7. 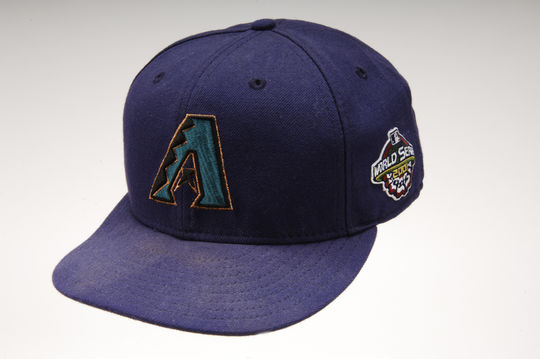 Curt Schilling of the Arizona Diamondbacks wore this cap in Game 4 of the 2001 World Series, a game played on Halloween. Schilling went on to be named the co-Most Valuable Player of that World Series with Diamondbacks teammate Randy Johnson. (Milo Stewart Jr./National Baseball Hall of Fame)

Similar to the first-ever World Series game on Halloween, the second also saw the Yankees come from behind to earn a victory. In a rain-delayed Game 3, the Yankees defeated the defending champion Philadelphia Phillies, 8-5, at Citizens Bank Park to gain a two-games-to-one Fall Classic lead.

After the Phils scored three in the second inning – including a solo homer from Jayson Werth off Andy Pettitte – New York fought back against Cole Hamels, the reigning World Series MVP, to take a 5-3 lead in the fifth.

After a Mark Teixeira walk, Alex Rodriguez hit a two-run homer in the fourth off a Hamels fastball – a ball hit into the right field corner and bounced back on the field. Initially stopping at second, Rodriguez would eventually be sent home after the umpires, for the first time in World Series play used instant replay review – it was only used for homers at that point – and ruled it a home run.

“I think it woke our offense up a little bit,” Rodriguez said about his homer. “Tonight I was a lot more disciplined, and better results.”

The homer was Rodriguez’s sixth of the postseason, which tied Bernie Williams (1996) for most by a Yankee in one postseason. Both teams combined for six home runs, with Werth connecting twice and Carlos Ruiz once for Philadelphia. Besides A-Rod’s homer – his first hit in nine World Series at bats – Nick Swisher and Hideki Matsui went yard for the Yanks.

“This was my first time coming to this ballpark,” said Swisher. “It just seems like you’re going to a slugfest a lot. It was a great day for us.” 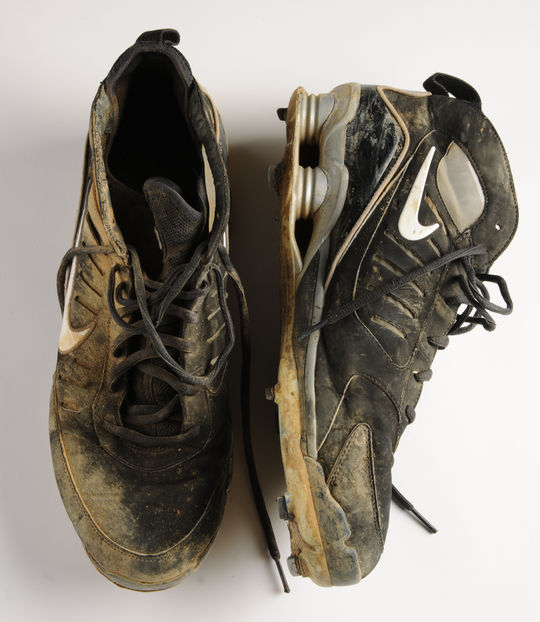 Spikes worn by Alex Rodriguez during the 2009 World Series, including when he hit a two-run homer that sparked a rally for the Yankees in Game 4. (Milo Stewart, Jr. / National Baseball Hall of Fame) 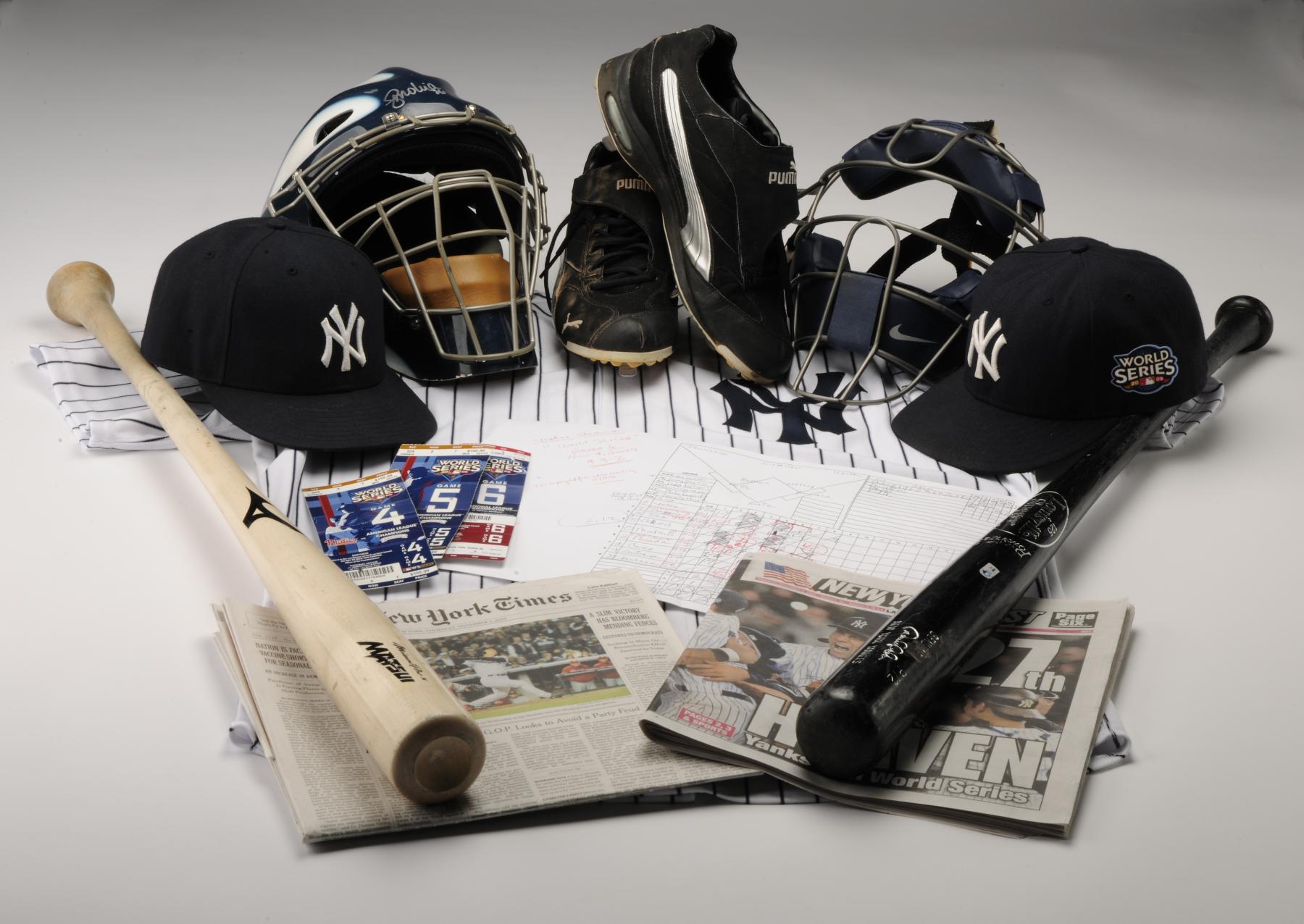 Pettitte, who extended his big league record by earning his 17th postseason win, gave up four runs in his six innings of work. The cap worn by the southpaw hurler – who would go on to win all three of the clinching games during the 2009 postseason for the Yankees – is now part of the Hall of Fame’s collection.

“It was an absolute grind tonight, that’s for sure,” Pettitte said. “I can’t remember winning a game where I’ve struggled like I did tonight. So it’s very gratifying.”

The Yankees would eventually go on to win the 2009 World Series in six games over the Phillies, capturing the 27th world championship in franchise history.

The San Francisco Giants, dressed in their Halloween appropriate black and orange uniforms, rode a remarkably poised pitching performance by rookie southpaw Madison Bumgarner to shutout the Texas Rangers, 4-0, in the fourth game of the 2010 World Series. The victory, at Rangers Ballpark in Arlington, gave the visiting team a three-games-to-one advantage and put them on the cusp of the franchise’s first championship since 1954.

Bumgarner, 21, allowed only three singles and two walks in eight innings, with closer Brian Wilson working a perfect ninth. The Rangers, shut out for the second time in three games, did not reach second base until there were two out in the seventh inning. Texas starting pitcher Tommy Hunter gave up two runs in four innings.

“I just keep telling myself to relax. I told myself that so much that it’s starting to become second nature,” Bumgarner said. “It makes it a lot easier on me and the players, I think, to see somebody that’s relaxed out there throwing.” 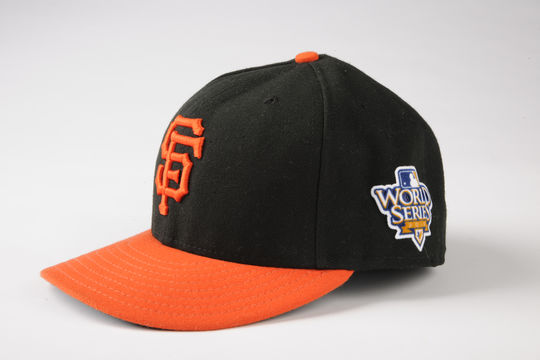 He had great poise, composure, sense of belonging. I can’t say enough about what he did.

The cap Bumgarner wore in Game 4 is now part of the Hall of Fame’s collection.

The Giants offense was fueled by Aubrey Huff, the designed hitter, who hit a ball inside the right-field foul pole for a two-run homer in the third inning, and catcher Buster Posey, who hit a solo homer in the top of the eighth inning.

Bumgarner and Posey formed the first battery of rookies to start a World Series game since pitcher Spec Shea and Hall of Fame catcher Yogi Berra paired up for the Yankees on Game 1 in 1947.

In another historic moment, George H.W. Bush and George W. Bush threw out the ceremonial first pitch in what was the first time two former presidents attended a World Series game.

The Giants would go on to capture the 2010 World Series in five games. 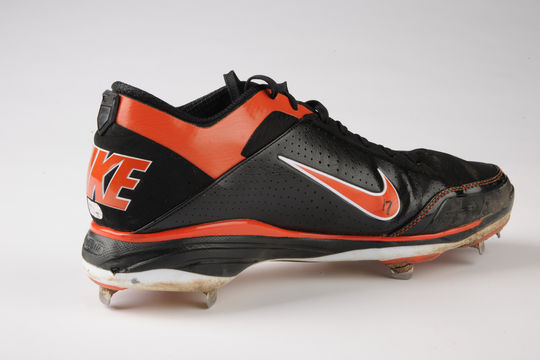 Spike worn by Aubrey Huff during Game 4 of the 2010 World Series, when he hit a two-run homer in the third inning to open the Giants' scoring. (Milo Stewart, Jr. / National Baseball Hall of Fame)