One day after getting the telephone call that cemented them among the top players in the long history of the National Pastime, fireballing closer Lee Smith and talented batsman Harold Baines shared the whirlwind they’ve experienced in the last 24 hours.

The duo, among the sport’s top players of the 1980s and ‘90s, learned on Sunday, Dec. 9, that they had been elected to the National Baseball Hall of Fame via the 10-person Today’s Game Era ballot that was voted upon by a 16-member electorate at the Baseball Winter Meetings in Las Vegas.

Baines and Smith will be honored at Hall of Fame Weekend July 19-22 in Cooperstown.

On Monday, with the election results still sinking in for the seemingly overwhelmed pair, the 324th and 325th members of the sport’s most exclusive fraternity took part in a Hall of Fame press conference in Las Vegas with the national media.

Hall of Fame Chairman Jane Forbes Clark began by welcoming the two new Hall of Famers, stating, “They are now both teammates with the all-time greats of the game and we are so happy to welcome them to Cooperstown.”

Smith and Baines were then presented with white baseball jerseys, “Hall of Fame” sewn across the chest in red script.

The one-time teammates with the 1994 Orioles often joked on the dais – Baines a man of few words often deferring to the more talkative Smith – and showed emotion when talking about their families.
Midway through the question-and-answer portion of the press conference, the first two members of the Hall of Fame Class of 2019 were asked if there was someone in their life who the election was as meaningful. Baines replied first.

“Probably my family. My wife, my four kids, my mother,” said an emotional Baines, who interrupted Smith when the pitcher tried to interject. “Lee, I ain’t done yet. My father’s not here. He’s my hero. That’s the only thing I miss is him not being here. It’s all yours, Lee.” 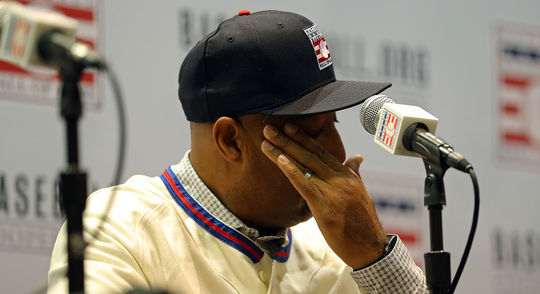 Harold Baines wipes away tears while taking about his father during the Hall of Fame press conference on Dec. 10 in Las Vegas. (Mary DeCicco/MLB Photos)

In their opening remarks to the media, Baines began: “I’m very honored, I’m very humbled and I’d like to thank the Veterans Committee for thinking I was worthy of being a Hall of Famer.”
“I played for a lot of teams,” followed Smith, whose election was a belated birthday gift, the pitcher having celebrated his 61st birthday on Dec. 4. “This has got to be by far my best ball club. I love this one here.”

An imposing 6-foot-5 figure standing on a pitching rubber, Smith spent eight of his 18 seasons for the Cubs, with time also hurling for the Red Sox, Cardinals, Yankees, Orioles, Angels, Reds and Expos. The all-time saves leader at the time of his retirement with 478, he was a seven-time All-Star who led his league in saves four times and topped the 30-save mark in 11 seasons.

Asked what was on his mind after receiving the news of his Hall of Fame election, Smith said, “It was tough. I’ve been talking to so many of the guys now, like Bert (Blyleven) and the rest of the fellows and it still hasn’t sunk in to them yet. So it hasn’t got there yet for me either. But I’ll tell you what. Just to get that phone call, it’s a great feeling.” 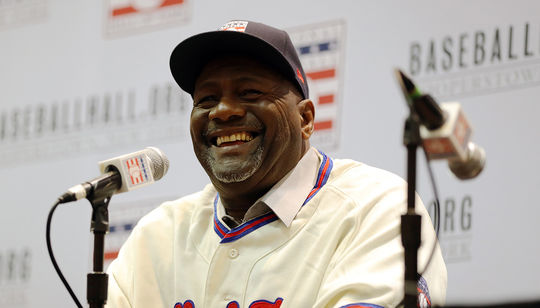 Lee Smith smiles during a press conference introducing him as a Hall of Famer on Dec. 10 in Las Vegas. (Mary DeCicco/MLB Photos)

The 59-year-old Baines, who appeared on the BBWAA ballot from 2007 to 2011, was with the White Sox for 14 of his 22 seasons, a career that also included stops with the Orioles, Rangers, Athletics and Indians. When the six-time All-Star retired after the 2001 season he was the all-time leader among designated hitters in games, runs, hits, homers and RBI. He finished with 2,866 hits and 1,628 RBI, an RBI total that ranks 34th all-time.

“I wasn’t sitting around thinking about it, to be honest,” said Baines when explain his expectations for the Hall of Fame this time. 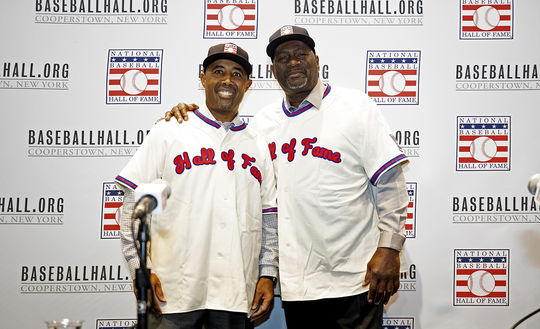 Harold Baines (left) and Lee Smith were introduced to the media as Hall of Famers on Dec. 10 in Las Vegas. (Mary DeCicco/MLB Photos)

“It’s a very special day. A lot of my friends are here. I’m just honored to be a part of this great fraternity that I’m joining. But I wasn’t waiting to get a call. I didn’t play the game for the Hall of Fame. I played the game to have a job and try and win championships.”

About memories spending the strike-shortened 1994 season together with the O’s, Baines joked he’d remember, “Watching Lee take a nap.” – in reference to Smith’s habit of napping during games prior to entering the contest.

According to Smith, he really enjoyed playing Baltimore. “Every day you would come out of the house and someone wanted to see if they could get tickets to the game. That’s a good feeling as a player. It means you have a sellout crowd for the rest of the season. That let you know what kind of product the organization was putting on the field that year. I really loved playing and wish I could have played there longer.”

The Windy City legends both got their big league starts and established their baseball credentials playing in Chicago in the 1980s – Baines with the White Sox and Smith as a Cub.

“(Chicago) means a lot to me,” Baines said. “They treated me like I was a Chicagoan. I’m not, but they always treated me with a lot of love. Even after I stopped playing they always respected the way I played the game.”

“(Chicago’s) home for me. Other than Louisiana,” said Smith, who lives outside of Shreveport, La. “If I have a choice about somewhere I want to be it definitely would be Chicago. The fans there have always, always pulled for me. No matter what ups and down the organization or team is going through, the Cubs fans always think of some fun and great memories there. Any chance I get to go back to that ballpark, it’s unbelievable.”

With bronze plaques awaiting them in the summer, Smith and Baines will be inducted in Cooperstown on July 21, 2019, along with any electees who emerge from the BBWAA election, to be announced on Jan. 22, 2019.