“East Side, West Side, all around the town
The tots sang "ring-around-rosie," "London Bridge is falling down"
Boys and girls together, me and Mamie O'Rourke
Tripped the light fantastic on the sidewalks of New York”

-- From “The Sidewalks of New York,” by lyricist James W. Blake and vaudeville actor and composer Charles B. Lawlor, 1894

Mamie O’ Rourke, was, of course, a real person, married to “Diamond Dan” O’Rourke, the owner of one of Manhattan’s most lively pre-prohibition taverns, located just off the Bowery. He was also the father of one Florence “Florrie” O’Rourke, who played for Margaret Nabel’s original New York Bloomer Girls baseball team (in existence from 1910-1935), and later formed her own team under the alias of Peggy O’Neil and Her Eight Men.

Florrie O’Rourke’s history is part of the collection at the National Baseball Hall of Fame and Museum, thanks to a donation from her grandson, Victor Rugg.

The collection includes several beautiful photographs as well as a 1922 flyer for the New York Bloomer Girls, which includes their full schedules for 1920 and 1921. Also included is a small notebook within which she records her baseball earnings – usually between 5 and 20 dollars per game – for the seasons of 1926-29. Since those earnings are listed by city, there is a real treasure trove for researchers who would like to go back to original local press accounts and reconstruct those seasons.

Born in 1901, by age 12 Florrie was drawing notice on the baseball diamond – she was captain of a neighborhood team called Mulberry Bend, which “won over every other playground in New York City.” As the winners, they were invited to be guests of the Giants at the Polo Grounds, whose Hall of Fame manager John McGraw was a familiar face at her father’s establishment.

When the ticket taker refused to accept that a girl could be a member of a prizewinning youth baseball team, she protested so loudly that McGraw himself came to get her through the turnstile. Later that same day, he had the young gal pitch to him, with Christy Mathewson behind the plate. The following year, the Washington Post noted that she was captaining another team, the “O’Rourkers,” for whom she played first base.

By the 1920s, she was the regular first baseman for the New York Bloomer Girls, who travelled up and down the east coast playing men’s teams, Negro League teams and other women’s teams. Against the latter, Nabel’s Bloomer Girls were reportedly undefeated, and therefore billed themselves as the “female champions of the world.” 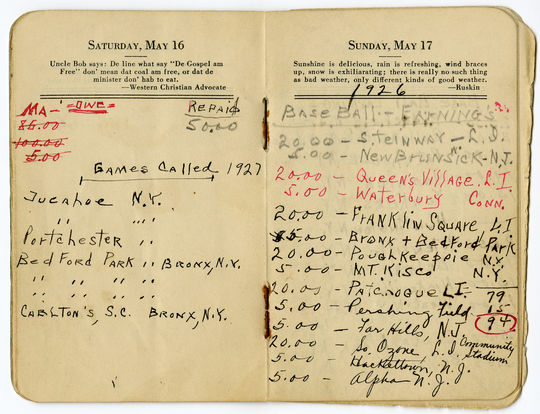 This notebook, which belonged to Florrie O'Rourke, documents her earnings as a member of the Bloomer Girls. (National Baseball Hall of Fame and Museum)

Nabel was a strict, skilled businesswoman who knew how to promote her team, and reported earning as much as $1,700 on a single ball game, though also admitting that sometimes it was only a break-even affair. She took over the NY Bloomer Girls in 1920 and ran them into the mid 1930’s, when the Depression and the rise of softball were twin difficulties facing women’s baseball teams.

This wrapper served as a cover for the Bloomer Girls schedule for 1922 and is preserved in the Hall of Fame collection. (National Baseball Hall of Fame and Museum)

Like most Bloomer Girls teams, the team traded upon showmanship and novelty to draw fans, but often surprised those fans by beating their opponents or at least turning in a closely-fought game. A 1922 article describes the Girls in their “natty maroon uniforms of bloomers, middy blouses, with ‘New York’ across their breasts, and maroon caps with white peaks.” The description also notes that they wear regulation spikes instead of “the petite shoes worn by members of their sex.”

The same article then gets down to business: “That the team was no joke was proved shortly after the start of the game by the girls’ ability to get on the bases, the fleet-footedness in stealing bases, and most important, their ability to swing a baseball club.” This can be seen in a 1922 box score of their game against the African-American “Black Sox Girls,” in which the New York Bloomer Girls prevailed 48-2, on the strength of two 15-run innings. O’Rourke was 5-for-6 with six runs scored in the game.

After the end of her Bloomer Girls careeer, O’Rourke found a manager and changed her name to Peggy O’Neill, taking center stage on a team which was otherwise all male. The collection includes a calling card with O’Rourke/O’Neill’s picture on one side, and the taunt “Why are the Yonkers Caseys afraid to play Peggy O’Neill and her Eight Men?” She also played as Peggy O’Neil with a local semipro team called the Tammany Tigers.

This ticket stub to a Bloomer Girls game is preserved in the collection at the Hall of Fame. (National Baseball Hall of Fame and Museum)

After her playing career, O’Rourke became an umpire. When asked by a reporter what it took to be a female umpire, O’Rourke replied “You’ve got to have an even disposition, with a strong arm to back it up.”

Umpire O’Rourke was not afraid to mix it up, however, and the article reports that the captain of a team who didn’t like one of her calls said to her “I’ve a mind to smack you on the chin.”

“Why don’t you,” she replied, and he was later carried off the field. 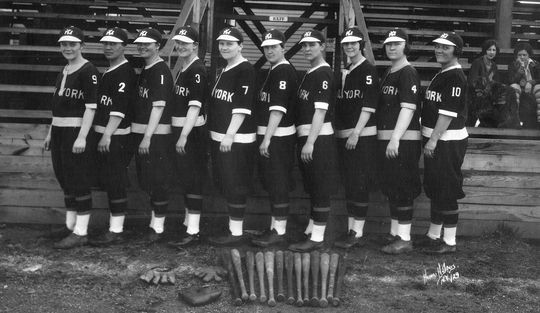 The New York Bloomer Girls played regularly from 1910-35 and excelled against some of the best competition of the era. (National Baseball Hall of Fame and Museum)

O’Rourke, the article reports, believed that women were more suited to umpiring than men. “Women think more quickly,”she said. “Men dawdle and haggle. Besides, a woman can do a better job of laying down the law. It comes natural to us.” 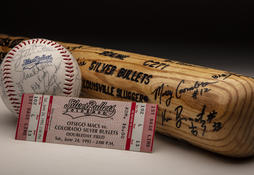 The Colorado Silver Bullets journeyed to Cooperstown more than once during their franchise history. 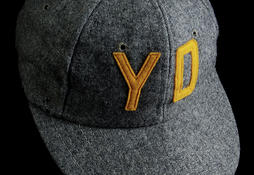 Many of those talented Little League athletes are young women who can follow their baseball dreams, thanks to Maria Pepe. 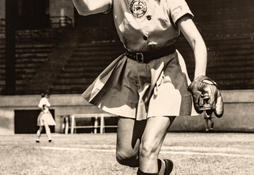 A star for the AAGPBL, Connie Wisniewski was known as "The Iron Woman."