Before cable television, satellite TV and the internet changed viewing habits forever, there was UHF.

The Ultra High Frequency band, channels 14 and higher on the dial – when it was really a dial – featured low-power stations that were often not affiliated with one of the three major networks. In short, if your favorite baseball team was banished to the UHF spectrum, it did not bode well for the club’s postseason prospects.

So it was with the 1981 Cleveland Indians, who were in their second season on WUAB-TV Channel 43. After years on CBS affiliate WJW-TV, Indians games moved to the UHF band starting in 1980.

Five weeks into the 1981 campaign – on a misty, 49-degree night at Cleveland Stadium, Len Barker took the mound for the Indians. And WUAB announcers Joe Tait and Bruce Drennan found themselves in the middle of history. 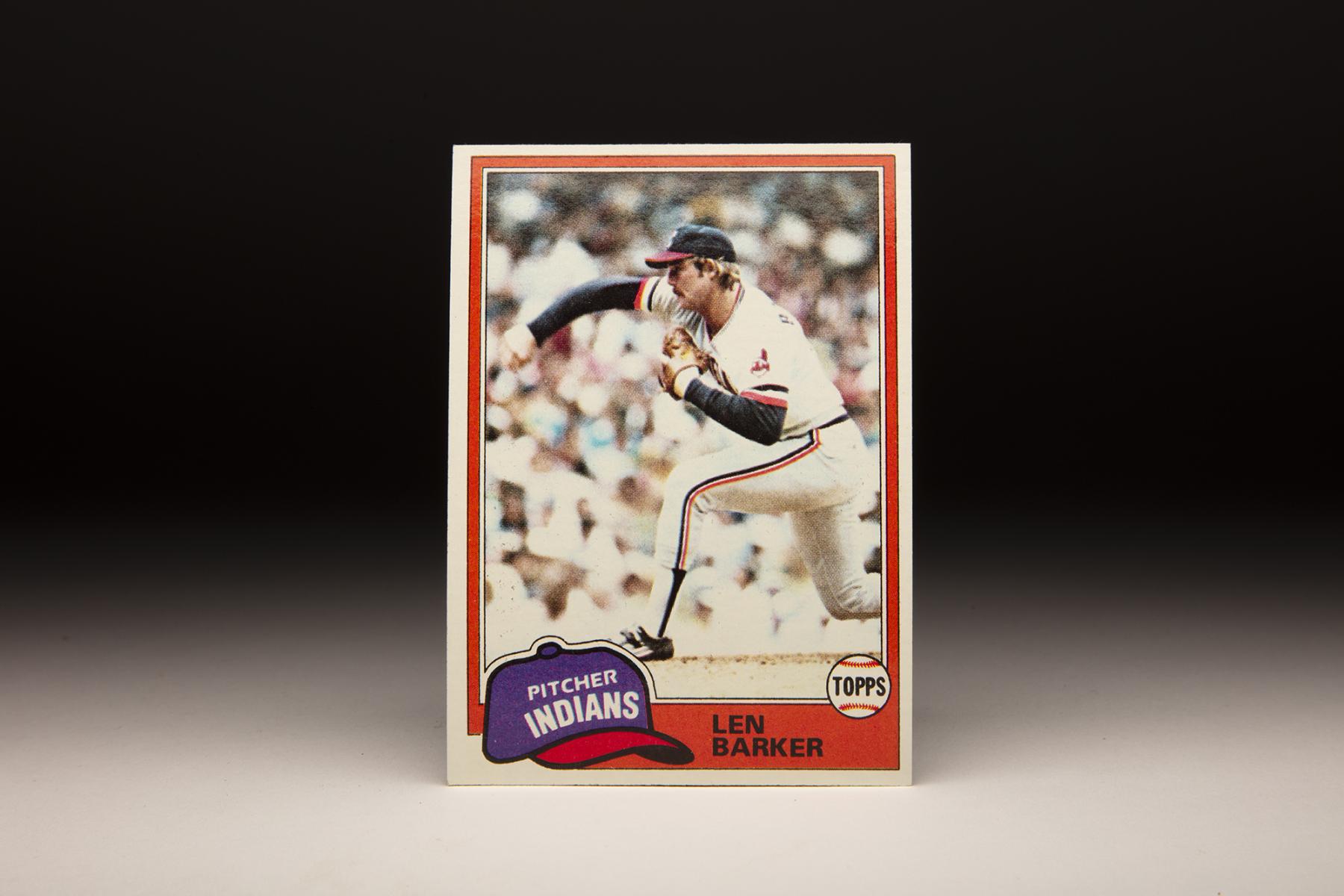 That night, Barker pitched the 10th perfect game in big league annals – a performance that captured the nation’s attention and seemingly came out of nowhere. There were 7,290 paying fans in attendance that night, so most of those who saw the game live watched it on Channel 43.

For many, the fuzzy pictures produced a glimpse of the best game they would ever see pitched.

Barker, born July 7, 1955, in Fort Knox, Ky., grew into his 6-foot-5 frame in high school and quickly became a big league prospect. Taken with the first pick in the third round of the 1973 MLB Draft by the Rangers – the same year Texas selected high school pitcher David Clyde with the No. 1 overall pick – Barker put himself on the path to the majors by going 7-1 with a 1.37 ERA in 11 starts in the Gulf Coast League that summer. 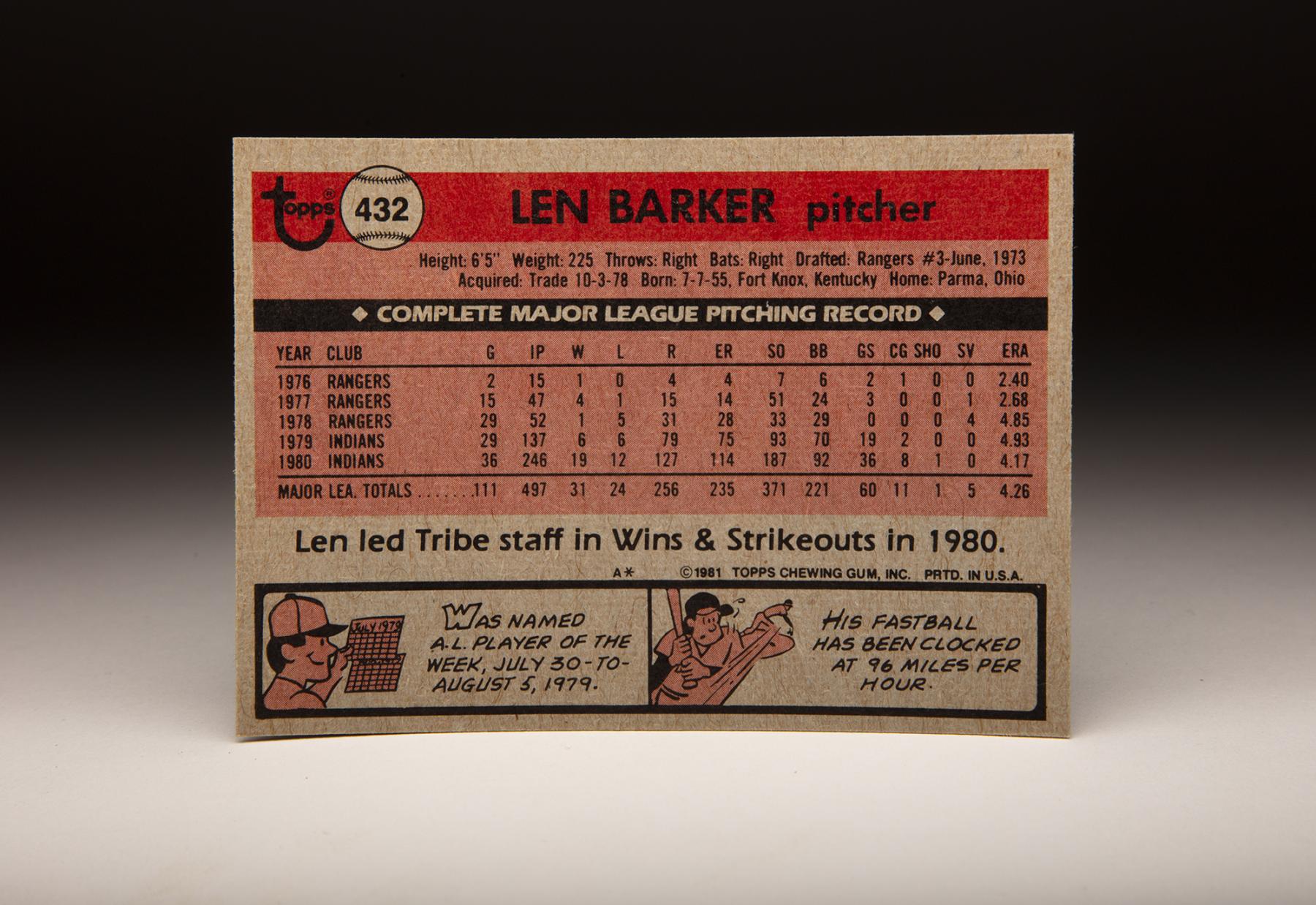 Barker established himself as one of the game’s most touted youngsters over the next three seasons, making his debut with the Rangers on Sept. 14, 1976. But Barker found harnessing his plus fastball and knee-buckling curve a challenge – and he bounced between the minors and the Rangers over the next two seasons.

Then, four days after the end of the 1978 regular season, the Rangers shipped Barker and Bobby Bonds to the Indians in exchange for infielder Larvell Blanks and relief pitcher Jim Kern.

The following year, Kern had a remarkable season with the Rangers: Going 13-5 with 29 saves and a 1.57 ERA in 143 innings and finishing fourth in the American League Cy Young Award voting. Barker, meanwhile, went 6-6 with a 4.92 ERA over 137.1 innings as a spot starter – leading Indians fans to lament the trade.

But while Kern’s career faded starting in 1980, Barker put it all together. He went 19-12 in 36 starts in 1980, winning 11 of his first 12 decisions after the All-Star break. He posted a league-leading 187 strikeouts that year – the last time in a non-strike shortened season that a pitcher has led one of the major leagues in strikeouts with fewer than 200 Ks.

It was this season that became the last stat line on his 1981 Topps card, which depicted a photo of Barker’s straight-on delivery on the flip side.

Then came Barker’s date with destiny. Facing a Blue Jays lineup that featured future stars Lloyd Moseby, George Bell and Damaso Garcia along with veteran slugger John Mayberry, Barker fanned 11 of the last 17 batters he faced and did not go to a three-ball count on any batter.

Pinch-hitter Ernie Whitt ended the game by flying out to center fielder Rick Manning, setting off a celebration and capping the first perfect game in the majors since Catfish Hunter of the A’s blanked the Twins on May 8, 1968. 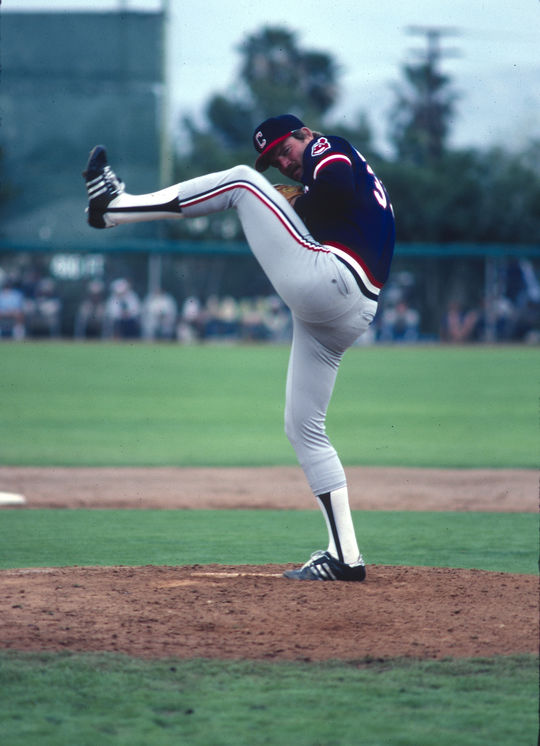 ESPN was still in its infancy – and social media wasn’t even on anyone’s radar – yet the nation buzzed with excitement over Barker’s gem. For a fleeting moment, the Indians were the talk of the baseball world.

Barker was 5-3 when the strike wiped out the middle of the 1981 season. He was selected to pitch in the All-Star Game in Cleveland when the games resumed, and Barker tossed two perfect innings in the National League’s 5-4 win. Once again, Barker finished as the league leader in strikeouts – this time with 127 over 154.1 innings.

Barker went 15-11 in 1982, then was traded to the Braves on Aug. 28, 1983, in a stretch-drive deal that sent prospects Rick Behenna, Brett Butler and Brook Jacoby to Cleveland.

Barker and the Braves quickly agreed to a five-year, $4.5 million deal – but Barker could not recapture his Cleveland form in the National League.

Butler and Jacoby, meanwhile, became beloved Indians stalwarts who were the bridge to the Indians’ turnaround in the early 1990s. 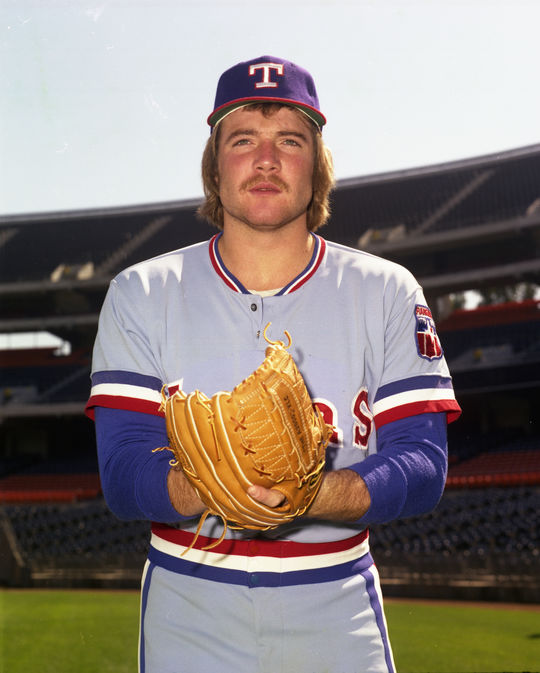 Len Barker was drafted by the Texas Rangers in the third round of the 1973 MLB Draft. (Doug McWilliams/National Baseball Hall of Fame and Museum)

After struggling to nine wins combined in 1984 and 1985, the Braves released Barker on April 1, 1986. He returned to the big leagues with the Brewers in 1987, making 11 starts in the last season of his career.

Over 11 big league seasons, Barker was 74-76 with a 4.34 ERA – never reaching the heights that his talent seemed to prophesy. But for one legendary night in 1981, Len Barker was truly perfect.

For those watching on Channel 43, that fact could not have been any clearer. 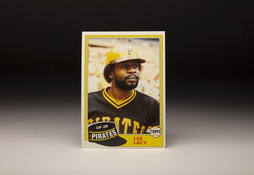