Class of 2017 inducted on a perfect day in Cooperstown

Introductions were finally made this afternoon between a quintet of new Hall of Famers and their bronze plaques, a symbol of immortality that will forever reside in Cooperstown for generations of baseball fans to see.

The National Baseball Hall of Fame held its annual Induction Ceremony at the Clark Sports Center on the afternoon of Sunday, July 30. Under ideal weather, with blue skies and temperatures in the mid-70s, the Class of 2017 – slugging first baseman Jeff Bagwell, base-stealing master Tim Raines, five-tool catcher Ivan “Pudge” Rodriguez, former MLB commissioner Bud Selig and longtime front office executive John Schuerholz – was presented for the first time their Hall of Fame plaques then addressed the audience, which included an estimated 27,500 at the induction site and hundreds of thousands on live TV on MLB Network.

Schuerholz, 76, who as general manager helped the Royals and Braves as a team architect to World Series titles, went first this day. And like any good leadoff hitter, set the day off on a positive note.

“I'm delighted to be here at this moment, so extraordinarily humbled, deeply honored, and thrilled beyond measure at this highest of all baseball honors,” began Schuerholz, “and too, as the proud son of Maryne and John Schuerholz, my wonderful, loving parents, and to honor them and my extended Schuerholz family of highly talented amateur athletes from Baltimore, Md., led by my grandfather Pop Schuerholz, my uncles Willy and Gilbert, my dad, and Uncle Wilson and Uncle Donald.”

The longtime GM would later reflect on his profession and his feelings on this most important day.

“How very honored I am to be inducted, joining baseball executive giants and team-building legends like Branch Rickey and Larry MacPhail and Ed Barrow, George Weiss, and my good friend Pat Gillick, who sits behind me in these seats,” Schuerholz said. “When my cell phone rang at 5:13 p.m. in my room at the Gaylord National Harbor Hotel on Dec. 4, 2016, and Jane Forbes Clark spoke these words: "Hello, John. This is Jane. I'm pleased to inform you, you have been elected into baseball's Hall of Fame. Congratulations."

Up next was Bagwell, who spent his entire career, from 1991 to 2005, with the Astros. With a large contingent of fans from Houston in the crowd, he was soft-spoken, often funny, and humble.

“This is actually a really unbelievable day,” said the 49-year-old Bagwell. “I'm so humbled to be here, to be surrounded by some of the greats that ever played this game. The guys you see on TV, guys you read about and all that, and I'm standing up here and kind of sitting in the background just watching and just trying to figure out what's really going on.

“As I said before, it's an honor to be with all these Hall of Famers, to stand up here and try and talk my story, which I'd much rather be sitting in some of these rooms and listening to stories that they tell. But you know, this is all part of it, and I love it, and I'm humbled and I'm grateful.” 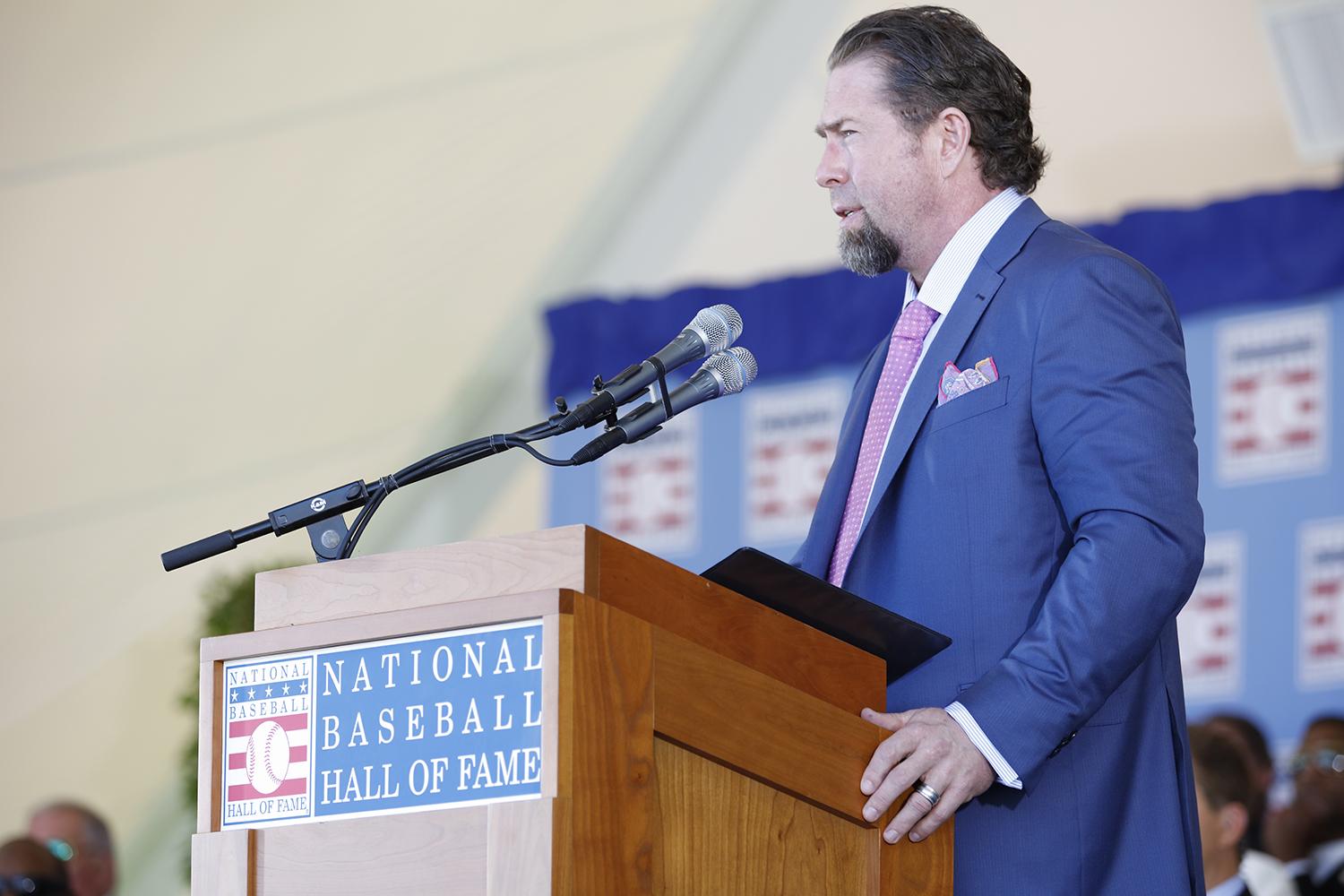 Jeff Bagwell spoke about the influence his parents had on his baseball career during the 2017 Induction Ceremony. (Milo Stewart Jr. / National Baseball Hall of Fame and Museum)

As Bagwell was contemplating over the last few months about his induction, his thoughts would often center on his dad.

“My father would come home at six o’clock at night, take off his shoes, we'd go outside play catch, play pepper, play baseball,” he said. “Then about 7 o'clock, we would try and turn on the Red Sox game. I'd have to go up on the roof and mess with the antenna and stuff like that. Obviously we had no cable (TV) back then, but it was time that I spent with my father.

“We would sit there at the table or watch the games, my dad would talk about his favorite player Ted Williams. We'd talk about Yaz, we'd talk about Fisk, talk about Rice, talk about Boggs. What we were doing is spending quality time together as a family. And if I could have given you guys anything for being at the dinner table or going to a game and to watch us play and to watch me play and I brought some joy, then I was helping bring you joy in a world that can be tough sometimes, but if you enjoy me playing and it brought our families together, then I did my job.”

On his 83rd birthday, Selig talked about his job as commissioner, both the challenges and successes. But the underlying sentiment was his appreciation for being recognized by the Hall of Fame. 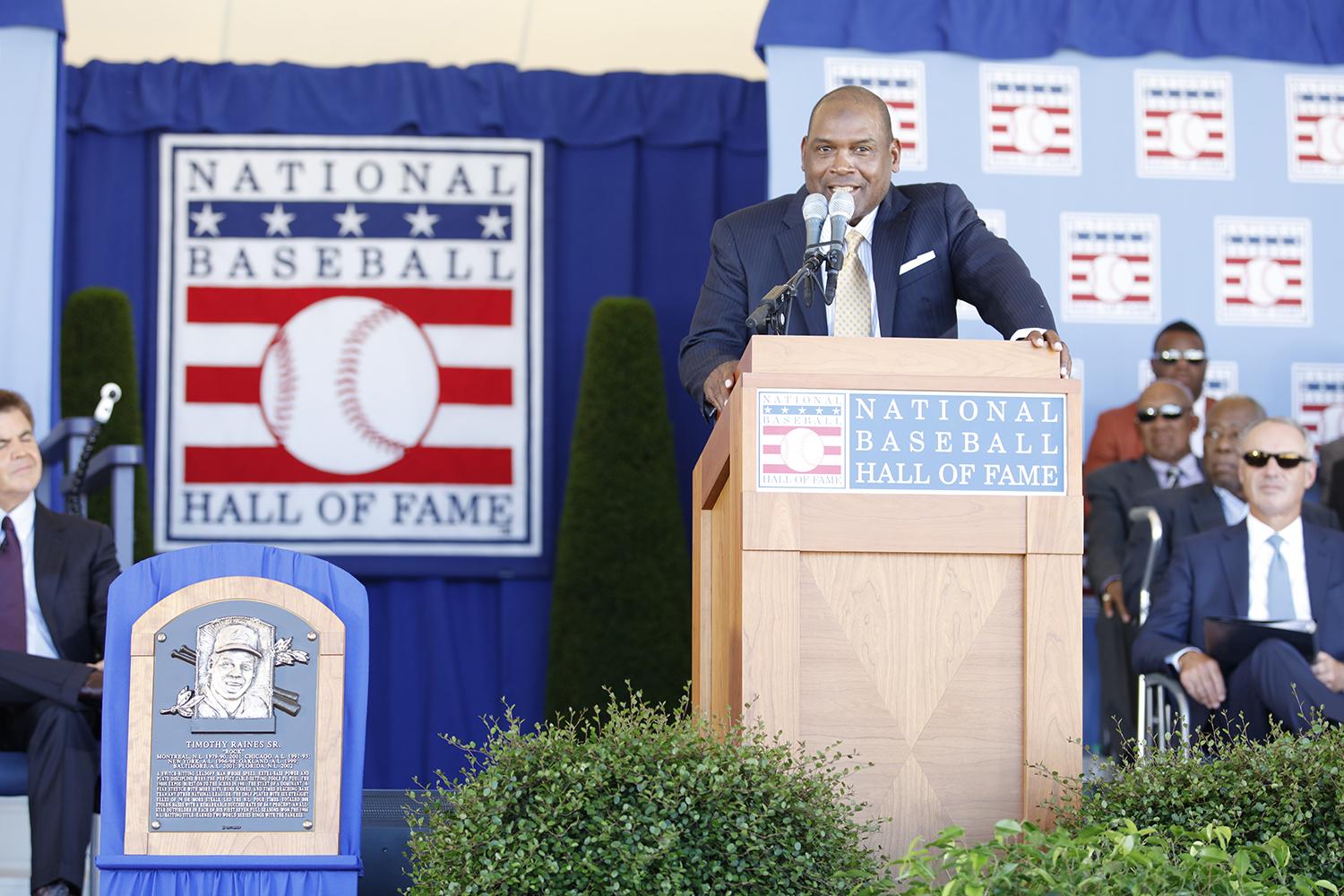 “And finally, to these Hall of Famers, I am honored to be in your presence. On your shoulders, this game became part of the fabric of our country, and we are forever indebted to you. For so many years, I sat right behind where I stand now and watched as each new member would stand here and deliver remarks with the kind of emotion that comes with great happiness and fulfillment.”

Rodríguez, the native of Puerto Rico who delivered a portion of his speech in Spanish, began with a self-deprecating story.

“This is such an incredible honor for me to be here in this place to play the game,” Rodríguez said. “Growing up in Puerto Rico, there was no greater joy to watching the Game of the Week. My favorite team was the Cincinnati Reds because the catcher was my hero, and the hero is here today with me, the great Johnny Bench.

“Never let anyone take your dream from you. Don't let anyone say your dream cannot be accomplished. Tell them about a short kid who was hanging from the rope when I was a little kid, dangling there, trying to stretch himself and hoping to become as tall as the other boys. And when I step on the side and look at my size, I can say I'm a very tall 5-foot-9. But I got a cool nickname out of it: Pudge.”

Later, Rodríguez, 45, shared an important story in English he first told in Spanish so everybody would be able to understand what baseball has meant to him. 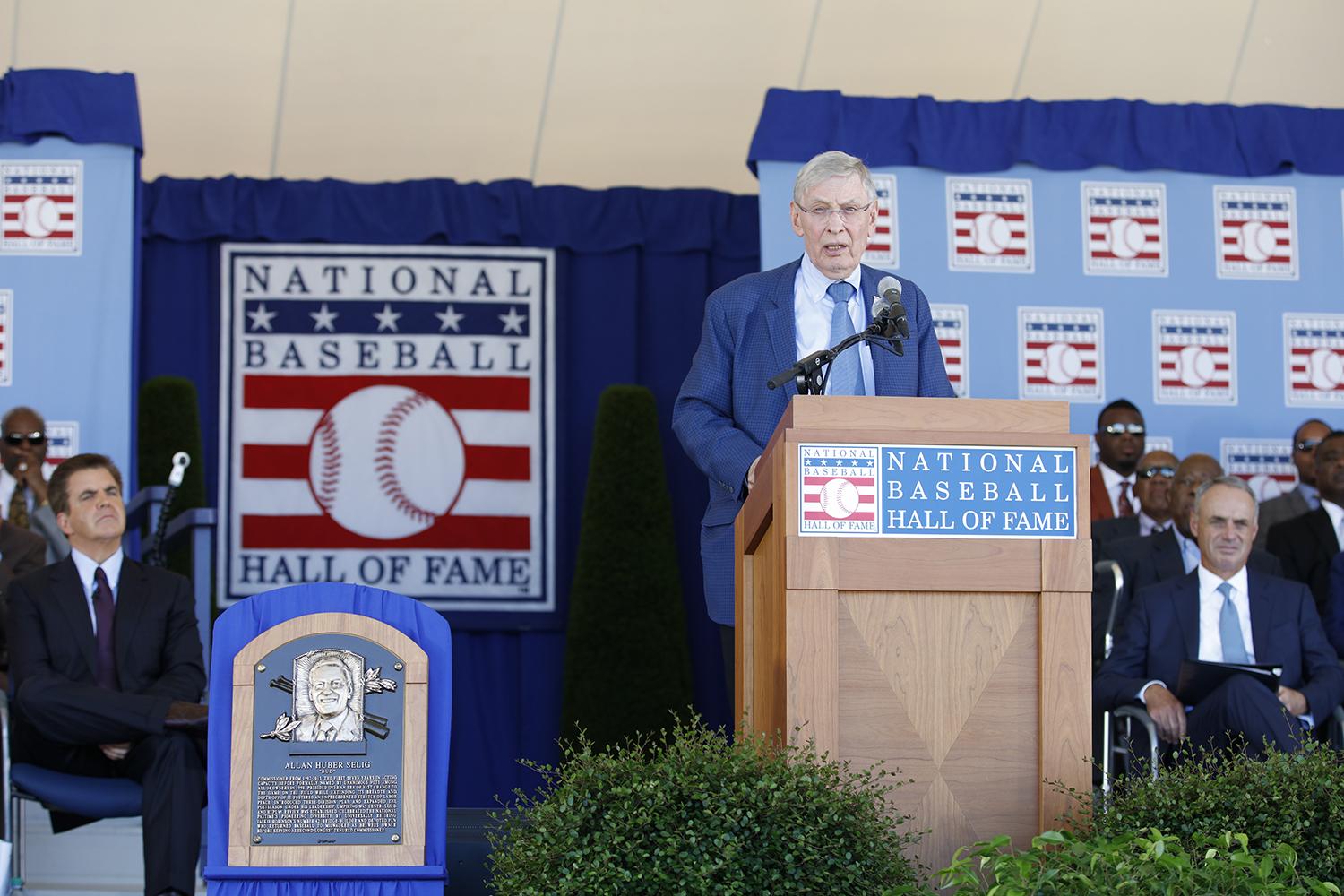 “To the youngsters, because I always love to talk to the youngsters and wish them all the best and share all my experience and all the best for the kids,” he said. “Everything in life is possible, and life's victories are realized through effort and dedication.
“I speak from experience, and I stand here among these legends from the world's most beautiful game of baseball.”

And in the end, with Rangers jerseys adorned throughout the crowd, Rodríguez thanked the fans. Even making them a promise.

“Don't feel intimidated to ask me for an autograph or a picture. You are not putting me out. It's my honor. Tell me your favorite Pudge story. Chances are it's going to put a smile on my face, and you know how much this Hall of Famer loves to smile,” he said.

“Why wouldn't I be smiling? My earliest childhood memories involved baseball. My entire life has been about baseball. When the teacher asked us what we wanted to be when we grew up, my answer was always the same: Play baseball. And I was able to play
at the highest level for 21 years. I am pretty happy about it.

With a good portion of the sea of cheering fans wearing Expos jerseys, a congested Raines, 57, took the stage as the event’s final speaker.

“First I want to thank the people that are the reasons that I'm here today, my parents, Ned and Florence,” he said. “Without them, obviously I wouldn't be here, but to my dad, you know, he was a great player in his own right. He didn't get the opportunity to play professional baseball. I got an opportunity to see him play, and I was a proud little three- or four-year-old kid watching my dad roam in center field at some of the back playgrounds in Sanford, Fla.”

Raines made sure to talk about and thanks one of his best friends, former Expos teammate and fellow Hall of Famer Andre Dawson, who was sitting a few feet behind him.

“For me, baseball was just like a playground for me. Unfortunately I was doing it at the Major League level. And I had my fun, and I kidded around, and sometimes I kidded around with some people, like Andre, who would like knock me out from time to time, literally,” Raines said. “But all in fun. I mean, Andre really didn't know how strong he was. Sometimes he would hit me and he would knock me out, but I would kind of play like it didn't really hurt, but it did, and I think he knew it, too.

“But all joking aside, without Andre Dawson, seriously, I think there's no telling what would have happened in my career. There was a point in my career that I felt like I needed someone to guide me in the right direction, and that guy was Andre Dawson. 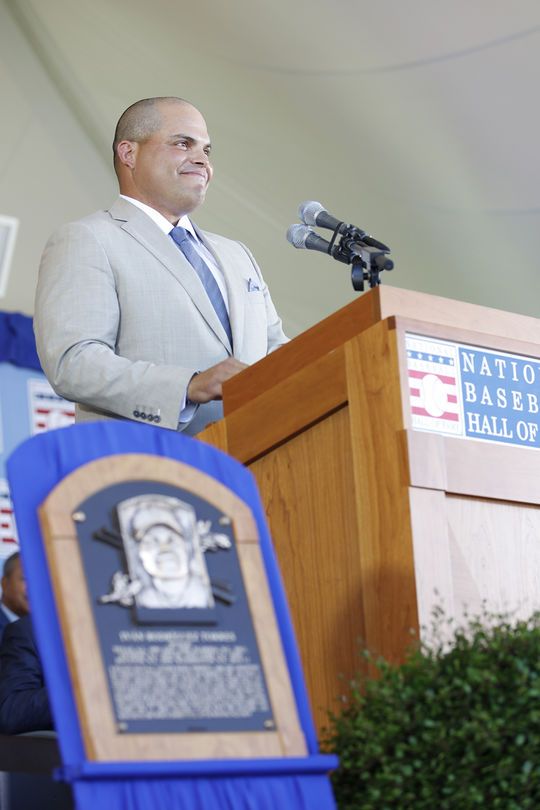 Iván Rodríguez translated parts of his Induction Ceremony speech into Spanish, for his Puerto Rican fans, friends and family in the audience. (Milo Stewart Jr. / National Baseball Hall of Fame and Museum) 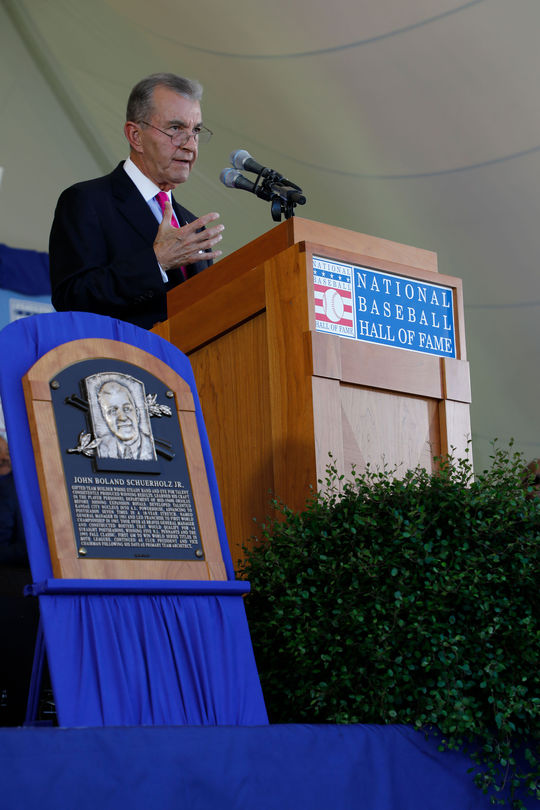 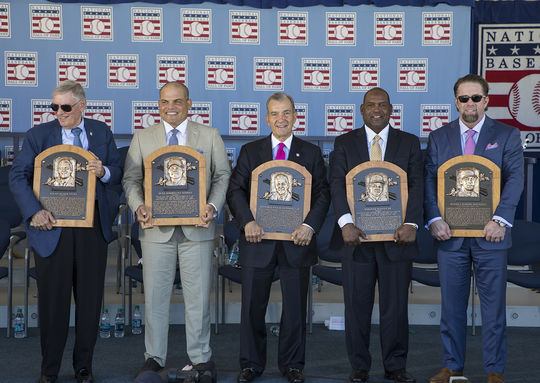 “You know, when I first met Andre – he’s not the type of guy that you can just walk up to and start a conversation. He has that look about him, that, you know, you'd better come correct if you're coming to say something to Andre, and I wasn't the kind of guy that would mind up going to him, but he had that frown about him. I was a little afraid.

“But finally, there was one time I said, forget this, this guy is probably one of the best players that ever played the game, and he's my teammate. I want to kind of be like you. And he finally accepted, and I followed. Thank you so much, Andre Dawson, for making me the player that I became."

The National Baseball Hall of Fame’s 2018 Induction Weekend will take place July 27-30, with the Induction Ceremony scheduled for Sunday, July 29.