Historic Ruth jersey a part of Hall of Fame history

Babe Ruth was bigger than the game, evolving through deed and legend to become part of the fabric of American culture.

Today, a piece of that fabric lives in Cooperstown – a Ruth jersey that he never wore in an official game and yet was seen by millions of fans during Babe’s lifetime.

It’s a story – like so many others – that comes alive at the National Baseball Hall of Fame and Museum’s exhibit Babe Ruth: His Life and Legend.

The exhibit celebrates Ruth’s singular journey and tells the story of his larger-than-life persona through the eyes of the men and women who witnessed it.

The exhibit features more than 50 three-dimensional artifacts – none more evocative than the woolen No. 3 jersey acquired by the Hall of Fame on June 13, 1948, the day Ruth’s number was officially retired by the Yankees. 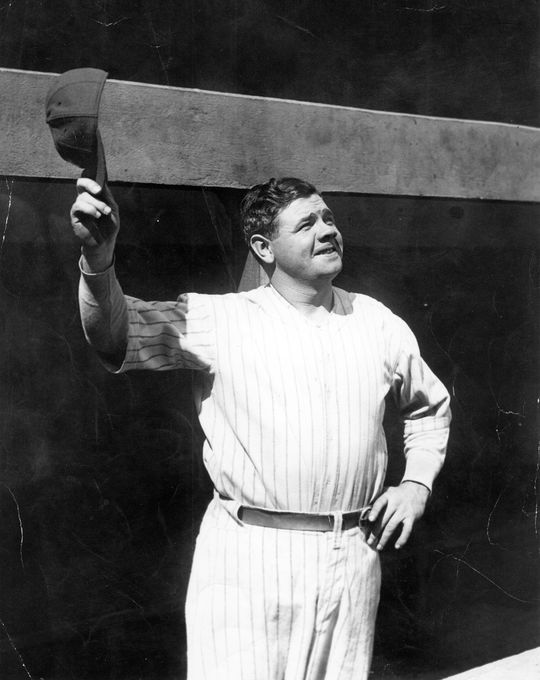 Babe Ruth wore Yankee pinstripes for 15 seasons, but a jersey he never wore during an official MLB game became maybe his most famous after he wore it in the film The Pride of the Yankees. (National Baseball Hall of Fame and Museum)

“A Hall of Fame official was on the field that day at Yankee Stadium when Ruth gave him the uniform,” said Tom Shieber, the Museum’s senior curator and the lead curator of the new Ruth exhibit. “The photo of Ruth looking out at the field with the number “3” on his back was seen world-wide, and it won a Pulitzer Prize for photographer Nat Fein.

“So just the fact that we have that jersey is incredible. But there’s so much more to this story.”

The tale begins in the summer of 2012 when Thomas Tull, a member of the Hall of Fame’s Board of Directors, loaned a 1920 game-worn Ruth jersey to the Museum. That jersey was soon put on exhibit in Ruth’s locker, replacing the “retired number” jersey that had been on exhibit.

“That gave us a chance to take a second look at that jersey – something we hadn’t done for many, many years,” Shieber said. “With increased access to online digitized newspapers, newly discovered photographs, and numerous other research resources, we now have the opportunity to better examine and understand our artifacts.” 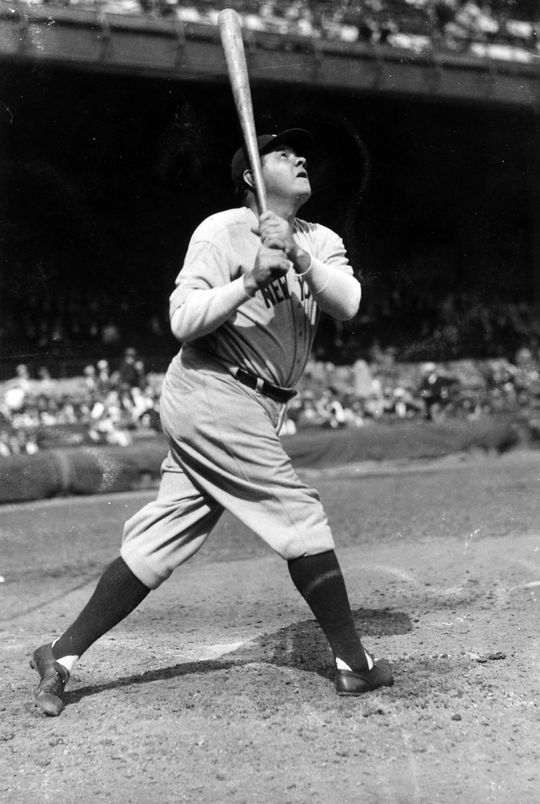 Babe Ruth's exploits on and off the field made him an American icon. He was inducted into the Hall of Fame with the inaugural Class of 1936. (Forrest Yantis/National Baseball Hall of Fame and Museum)

What Shieber and the curatorial team found was astounding.

After the June 13, 1948 ceremony at Yankee Stadium, Ruth immediately donated his cap, shirt, pants, belt and socks to the Museum – handing them to Hall of Fame representative Bob Quinn. Nine days later, they were on display in Cooperstown.

What Ruth failed to tell Quinn, however, was that he had worn the jersey and pants at dozens of benefit games and appearances throughout the 1940s. This included an Aug. 26, 1943 game at the Polo Grounds that raised $800 million in war bonds and a July 12, 1943 event at Fenway Park where Ruth met Ted Williams. 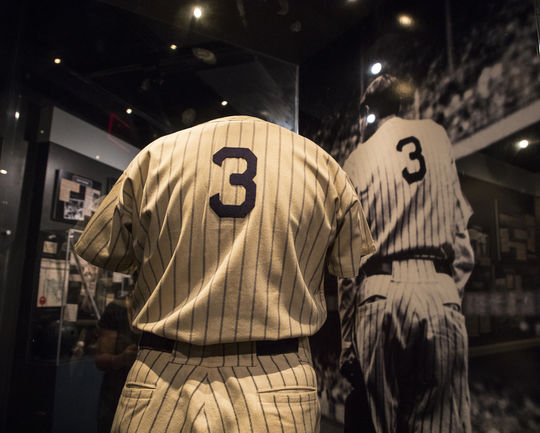 The Babe Ruth jersey on display in the Museum's Babe Ruth: His Life and Legend exhibit was given to the Hall of Fame on June 13, 1948, the day Ruth's No. 3 was officially retired by the Yankees. (Milo Stewart Jr./National Baseball Hall of Fame and Museum)

By matching photos of the time to the uniform in Cooperstown – with the Yankee pinstripes providing unmistakable lines for proof – the jersey’s journey could be easily followed.

And fortunately, Ruth left the greatest clue of all in his silver screen performance in "The Pride of the Yankees”.

Ruth played himself in the 1942 Samuel Goldwyn picture and was given a uniform – as were the other actors in the movie – by the Western Costume Company. The film features two scenes where Ruth wore a pinstriped home Yankees jersey, and in both cases the stripes match up perfectly with the jersey the Hall of Fame acquired from Ruth on June 13, 1948.

“The producers of the movie tried really hard to make it historically accurate,” Shieber said. “When Ruth first appears in a Yankees uniform, it is 1923, when the Yankees wore plain, pinstriped jerseys. The movie makers got that right. A later scene, however, is supposed to take place in 1933. Ruth and his teammates are seen wearing uniform numbers on their jerseys, which is accurate, but they are also wearing the familiar interlocking “NY” on their shirt fronts, which is wrong: at no time during Ruth’s tenure with the Yanks did the club wear the iconic design on their jerseys. Thankfully, these mistakes helped explain a mystery. The incorrect “NY” on Ruth’s jersey can be seen in the movie and in movie publicity stills at two, subtly different locations relative to the unmoving pinstripes. This came about because movie scenes are not shot in chronological order.

“Indeed, the stitches on the ‘3’ and the “NY” were very loose – the tailor at the studio was leaving it loose so they could take it on and off for different shots. When the “NY” was returned to the jersey for some final scenes, it was replaced at a slightly different location on the front of Babe’s jersey.” 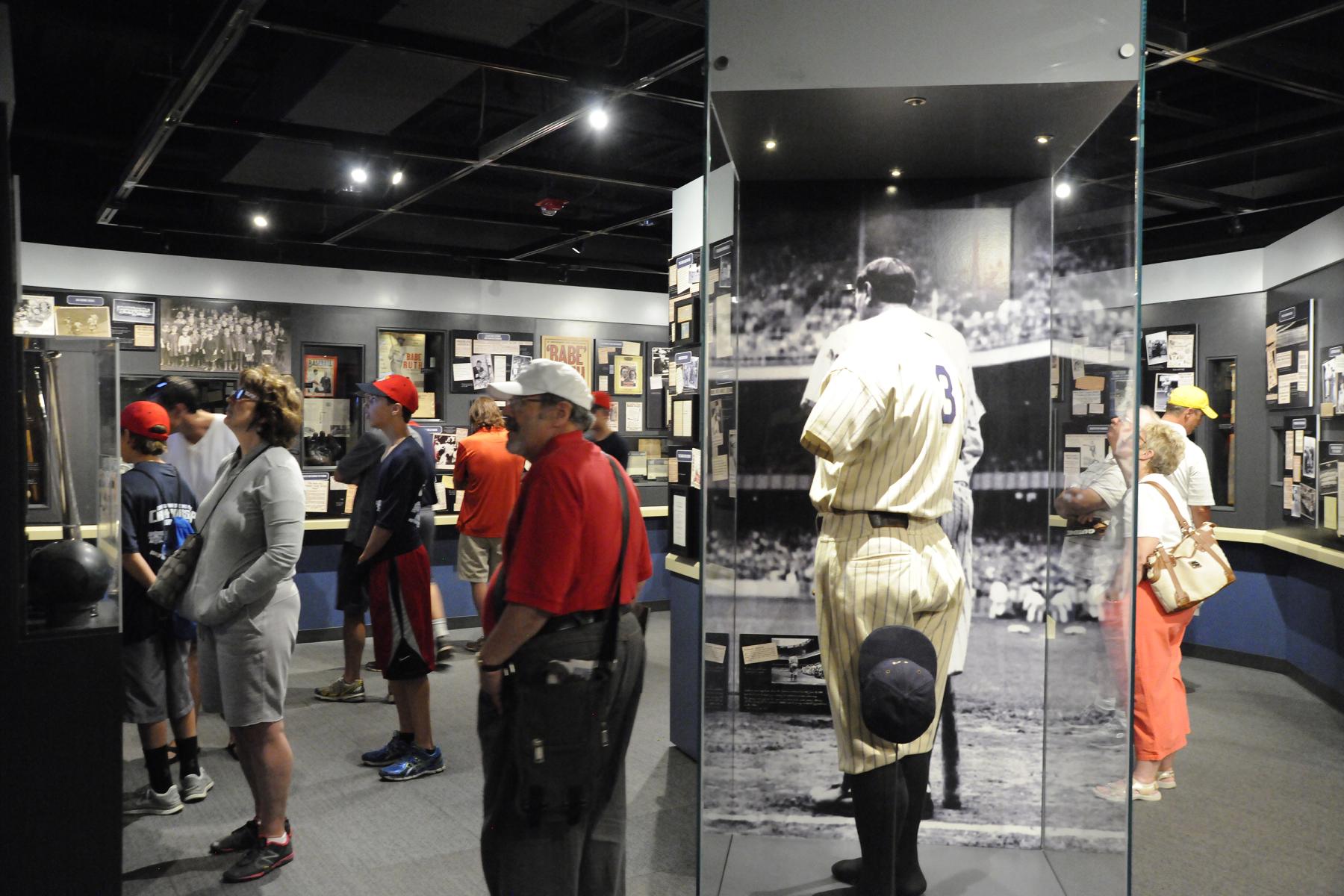 Interestingly, the pants worn by Ruth on June 13, 1948 were not used by the Bambino in either “Pride of the Yankees” or any of his known appearances with the “retired number jersey” throughout the 1940s. But in many of those appearances, Ruth wore pants that match another pair in the Museum’s collection – pants that were donated to the Museum following his death in 1948.

“It’s likely because the Babe had lost weight by the spring of 1948 due to his bout with cancer,” Shieber said. “The pants from ‘The Pride of the Yankees’ were too large for Babe. The pants he donned on June 13, 1948 have a smaller waistline and likely date from much earlier playing days.”

Mystery solved – and more to come. It’s all a labor of love for the Museum’s history detectives.

“The magic of baseball is in its history – stories that preserve the details of the game as well as moments that make up the American experience,” Shieber said. “A jersey like the one the Babe gave us on June 13, 1948 is more than just a shirt. It’s a personal artifact of a man who remains larger than life, even more than 60 years after his death.”