Induction Eve a thrill for Class of 2017

Immortality is defined as the ability to live forever. For the National Baseball Hall of Fame’s Class of 2017, that day arrives in just a few hours when their bronze likeness will forever adorn the walls of the Plaque Gallery.

The quintet will find themselves standing in front of more than 50 returning Hall of Famers, a crowd of adoring baseball fans numbering in the tens of thousands, and a national television audience on MLB Network receiving the game’s greatest individual honor.

During a Saturday press availability at Cooperstown’s Clark Sports Center, the members of the Class of 2017 shared their thoughts on the upcoming celebratory occasion. 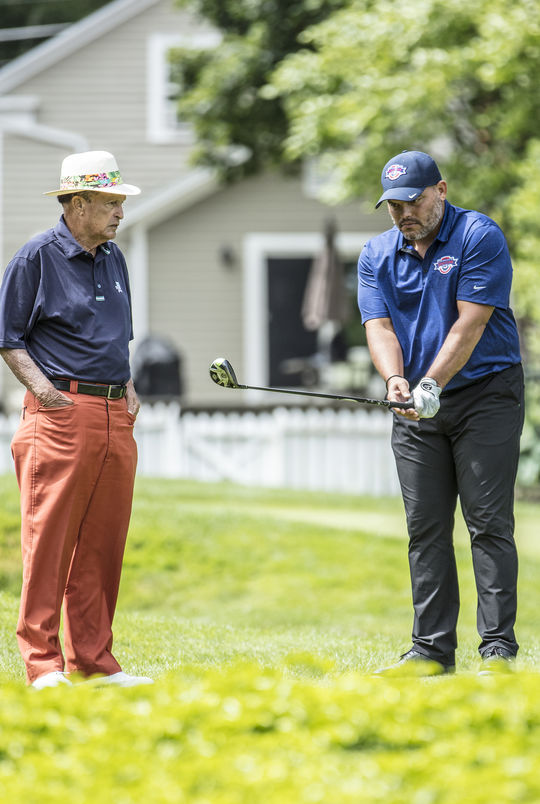 “You know what? And I’m being straight honest: This is absolutely insane, this whole thing. I don’t even remember this much media attention during the playoffs,” said a soft-spoken Bagwell, surrounded by dozens of cameras and microphones. “To get to the magnitude of this individually is something I’m trying to take in. I’ve talked to a lot of the Hall of Famers and they’re like, ‘Just enjoy it. It goes real quick.’ It’s just overwhelming.

“I’m not really high on talking about myself or having people talk about me. Obviously it’s an honor and I’m humbled by it, but it is a little bit overwhelming. I’m overwhelmed just by the support I’ve gotten from the city of Houston and from my family and friends.
Bagwell, reflecting on the whole scene, called it “kind of weird” what is happening to him.

“I’ve done some things in my career to get some awards but there’s no higher award individually that you can get than this. That’s the kind of thing that takes me back a little bit,” Bagwell said. “You have to remember in this game all you do is fail. There is so much mental (work) that goes into this. It’s a sport that you can succeed three out of 10 times and you’re an All-Star, but you still fail seven times. Just to be able to deal with that on a day-in-day-out basis and trying to keep it on an even keel is tough.”

Rodriguez was also patiently waiting for Sunday afternoon, but admitted he was also a little nervous.

“I can’t wait for that. A lot of family, friends and fans are going to be in town. I’m going to be ready on Sunday and show them my thanks that I have for all of them and just enjoy every moment of it,” Rodríguez said. “Of course I’m going to be nervous, anxious, happy, probably trying to not see my parents too soon because as soon as I see them it’s going to be emotional.

“It’s going to be an exciting day and I’m sure God is going to give me 10 great minutes for me to do the speech. And I know he’s going to be with me,” he added. “I’m fine. I’m enjoying every moment of this. We’re one day away from being on that stage. It’s going to be very emotional there tomorrow, I’m guessing, but at the same time it’s going to be a great moment for my family and for myself.” 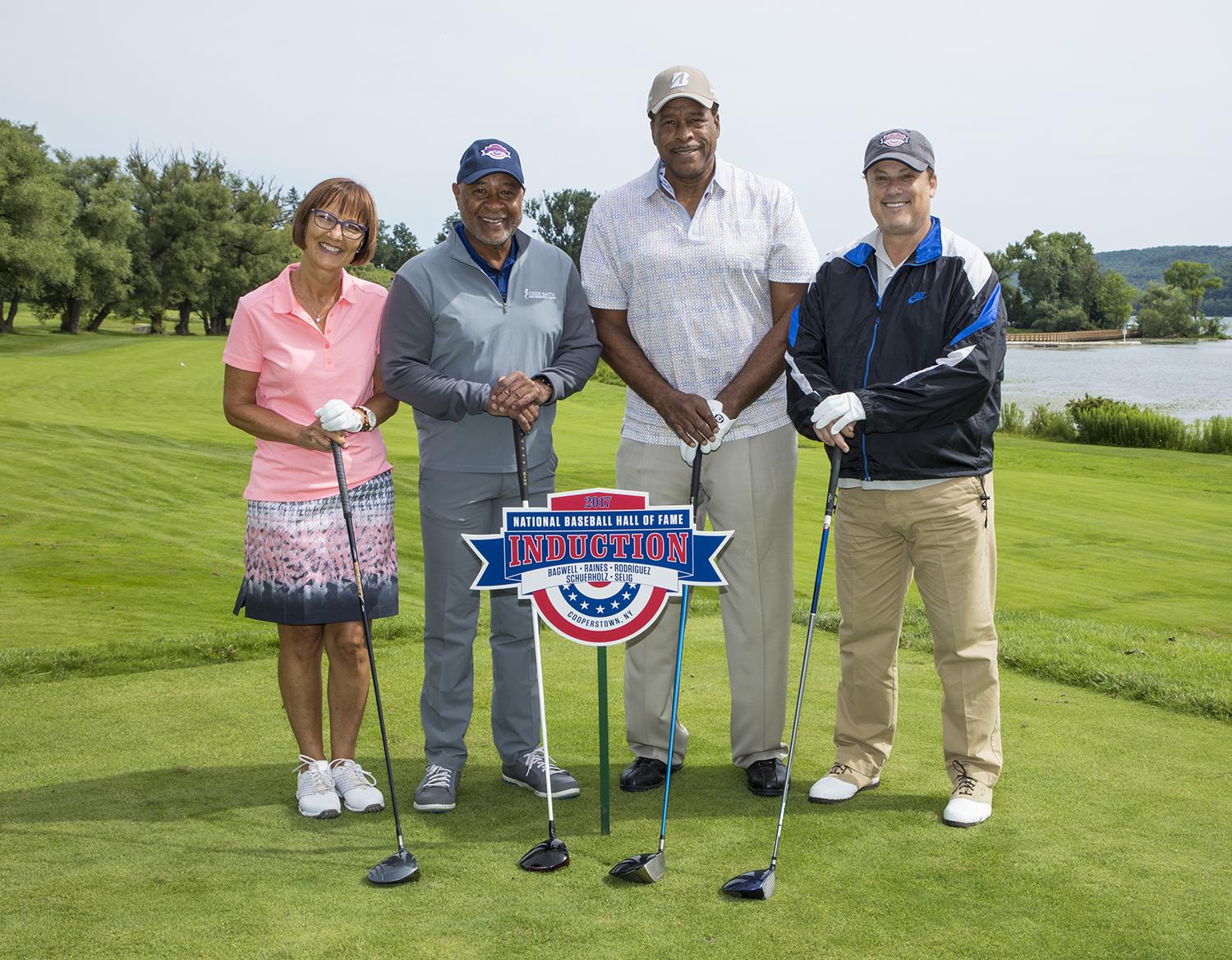 (Pictured from left to right): Debbie Dennler, Hall of Famer Ozzie Smith, Hall of Famer Dave Winfield and Randy Grossman comprised the winning team at the at the Hall of Fame Golf Tournament on Saturday at the Leatherstocking Golf Course in Cooperstown. (Milo Stewart Jr. / National Baseball Hall of Fame and Museum)

Raines had a smile on his face during the entire 30-minute press conference.

“I’m not nervous yet but I’m sure come 1:30 tomorrow I’m pretty sure there are going to be some nerves. I don’t think saying the word ‘excited’ gives justice to how I’m feeling.”

As for his induction speech, Raines said: “Every night before I go to bed I kind of critique what I’m going to talk about and every time is different. We’ll see what happens on Sunday.”

For Selig, the July 30 Hall of Fame Induction Ceremony will also fall on his 83rd birthday.

“I’m finally in Yankee Stadium, 15 years old, sitting in the upper deck. Cleveland Indians are playing. Big game, post-war, they’re drawing a lot of people. And they roll out a birthday cake. And I say to my mother, ‘You’ve embarrassed me.’ I’m 15 years old and I think the world revolves around me. Why would I think differently? Guess what? It was Casey Stengel’s birthday.”

When Schuerholz was asked how he was feeling, he replied: “I think the heartrate has gone way up.” 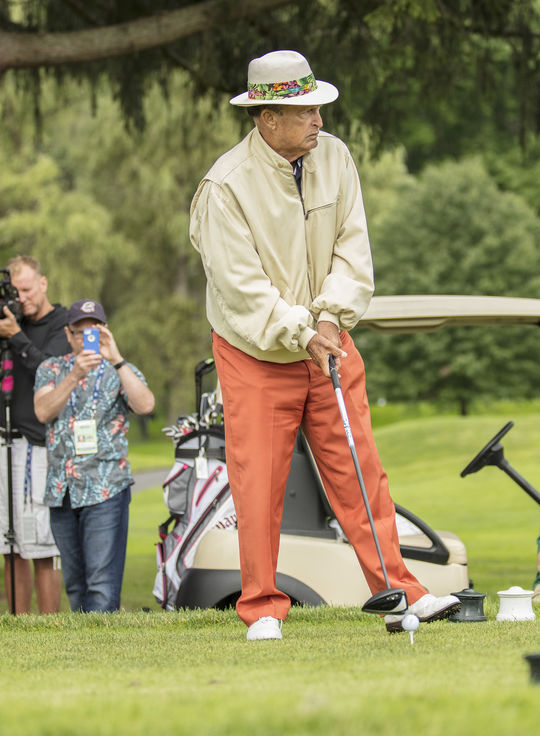 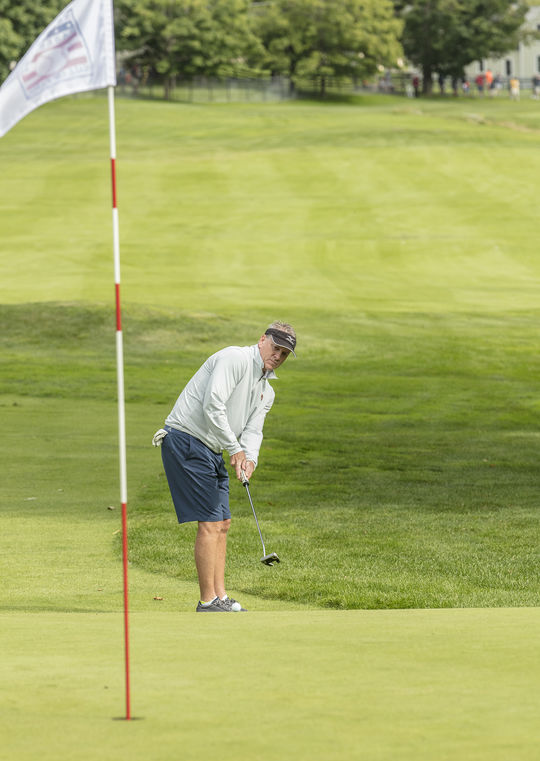 “I’m more proud than I ever could have imagined about anything in my life,” he added. “And I’m so excited about the reality of my being actually inducted into baseball’s Hall of Fame this Sunday. I’m very excited about that. And my very extended family (between 30 and 40), who will be here in support, are as excited as well.

“And my speech is ready to go. As we speak it’s being turned from my 25th or 30th iteration of the speech into final copy.”

The Hall of Fame Awards Presentation took place Saturday in the late afternoon at historical Doubleday Field. Claire Smith was on hand to accept the J.G. Taylor Spink Award for meritorious contributions to baseball writing, while Rachel Robinson was honored with the John J. “Buck” O’Neil Lifetime Achievement Award.

“Like a pebble in a pond,” Smith said, “the honor being named the 2017 J.G. Taylor Spink Award winner sent out the most beautiful ripples which are now washing up on the shores of Lake Otsego and they magically carried my family and me to the most memorable moment of my career.”

Robinson, the widow of Hall of Famer Jackie Robinson, began by saying, “I have such fond memories of Jack’s induction in 1962. It was a glorious day for our family.

“I’m also honored to receive the Buck O’Neil Lifetime Achievement Award. Buck O’Neil was a staunch champion of baseball and worked to promote inclusiveness within the sport,” she added. “So I’m truly gratified to be associated with your recognition of Buck in this way.”

Robinson ended with a lighthearted announcement on the future.

“Finally, I’m pleased to report to you that we have begun construction of the Jackie Robinson Museum in New York City,” she said. “I hope to see all of you when it opens in 2019. I don’t know if I’ll be there – I just turned 95.

“For me, today is a brilliant source of encouragement. I felt so wonderful since I’ve been here. And I thank you all.”

The Awards Presentation also honored Bill King with the Ford C. Frick Award for excellence in broadcasting, accepted by his step-daughter, Kathleen Lowenthal for her late father. Also, Hall of Fame Board member Thomas Tull gave special recognition to the film A League of Their Own on its 25th anniversary.

Immediately following the Hall of Fame Awards Presentation, a busy Saturday concluded with the Parade of Legends, in its ninth year, concluded in the early evening with thousands lining Main Street. With baseball’s greatest stars seated in trucks, fans cheered, waved and clapped with each glimpse, the procession coming to a halt in front of the National Baseball Hall of Fame and Museum. 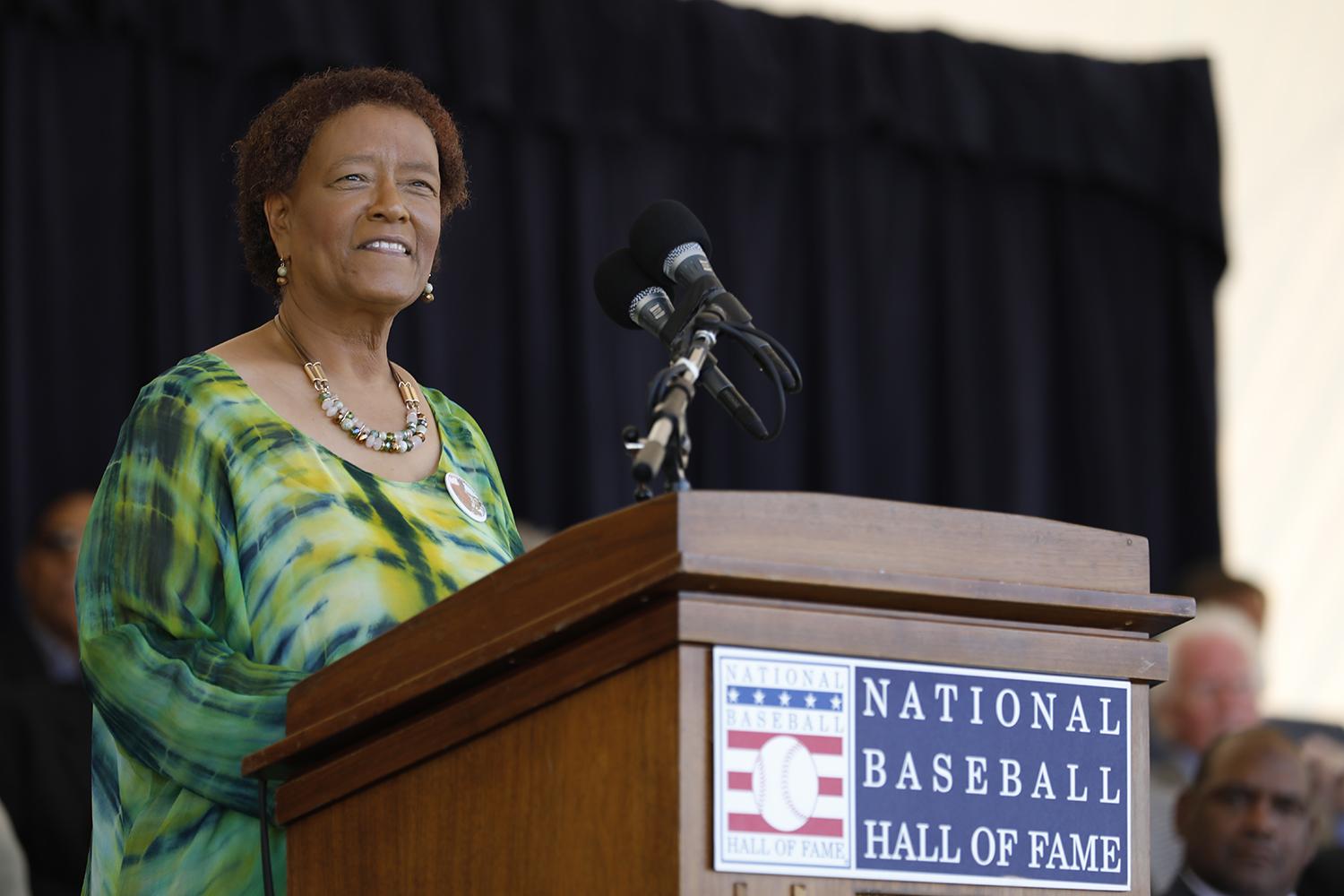 Saturday morning began with the Hall of Fame Golf Tournament at the Leatherstocking Golf Course, an occasion where a number of Hall of Famers were swinging clubs instead of bats. Sharing a golf cart with Rodríguez was Chi Chi Rodríguez, a member of the World Golf Hall of Fame who, like Pudge, was born in Puerto Rico.

“I’m really happy for him (Iván Rodríguez) to be in the Hall of Fame,” Chi Chi Rodríguez said. “I’ve always watched baseball games – it doesn’t matter where I am. I always have loved the game and it’s still my favorite sport. I play golf for a living but I’m not a fan of golf for a living.”

During a late-morning press conference at the CSC, Hall of Famer Rod Carew gave a glowing health update on himself. After suffering a heart attack in 2015, he was the recipient of a heart transplant in December. The donor was former Baltimore Ravens tight end Konrad Reuland, who died at age 29 on Dec. 12 following complications a brain aneurysm. By chance, Carew had met the young Reuland when the child was 11.

“I’ll tell you, I’m happy to be here,” Carew said. “This is to me almost like a miracle. I think God didn’t want this to end. I flat-lined I think three times from the golf course to the hospital. Then I had to wear an LVAD (left ventricular assist device) for about 16 months. Now I’ve got the real thing in me. I’ve got a young man’s heart in me.

“I had met him when he was about 11 years old. I went to watch a basketball game at his middle school. He came up and introduced himself to me. I hadn’t seen him since. So this was a complete surprise to my wife and I that he was my donor. So Konrad Reuland is here with me today at the Hall of Fame.”

Sunday’s Induction Ceremony will take place on the grounds outside of the Clark Sports Center, which is located on lower Susquehanna Avenue, unless severe weather cancels the event. Follow the @baseballhall on Facebook, Twitter, Instagram and Snapchat for the latest updates. 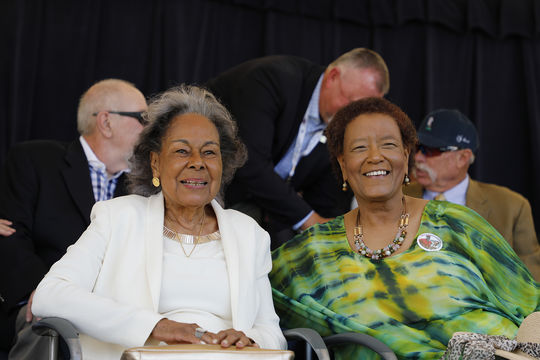