This Wizard of Oz touched down near a Cooperstown cornfield, bringing with him a quartet of Hall of Fame guests who brought smiles to those attending. And while the former big leaguers shared their decades of knowledge about the National Pastime, they also helped raise funds for a worthy cause.

The 2017 National Baseball Hall of Fame Induction Weekend got off to an early start Friday when, for the 16th consecutive year, Hall of Fame shortstop Ozzie Smith hosted his PLAY (Players, Legends And You) Ball event.

With contributions from fellow enshrinees like pitcher Randy Johnson, second baseman Ryne Sandberg, pitcher Fergie Jenkins and front office executive Pat Gillick, almost 40 fans enjoyed a session at a baseball field at the Clark Sports Center, only a few dozen feet from where Sunday’s Induction Ceremony will take place – not only absorbing tales from their sports heroes but also receiving on-field instruction.

“I tell people all the time that the greatest gift in life is the ability to give back. For all that this game has done for me, it’s the least that I can do to be able, through my friendships, to give something back.”
Smith, who has attended every induction ceremony since his own in 2002, recalled his big moment on stage.

“I think about how nervous I was,” Smith said. “You want to be professional, you want it to be good, you want it to be coherent, but it’s nerve-wracking and you can’t wait until it’s over. It’s stressful but at the same time surreal when you look back there and see Sandy Koufax, you see Hank Aaron, all your heroes growing up. To be considered one of those guys - and I never considered myself one of those guys - is wonderful.”

“Everybody had told me to wait until you come back when you’re not being inducted. So now this is the second year coming back and it’s just very relaxing,” Johnson said. “I’m still in awe of the people. A lot of these guys were a little bit before my time but I admired them because I knew who they were and I watched them and I appreciated them. Now you get to meet them and hang out with them. Some people I’ve actually faced and played with. Junior (Griffey) last year was my teammate and Mike Piazza I faced. This (year’s class), I faced Ivan Rodriguez and I faced and played with for two months Jeff Bagwell. I played 22 years so my generation and even people before me I’m seeing getting inducted. Now I’m a part of it. It’s kind of fun.”

Johnson was also a teammate with Hall of Fame inductee Tim Raines with the Montreal Expos.

“The one thing I remember about Tim Raines is he always had a smile on his face. We were polar opposites when it came to that because I was always kind of trying to intimidate and scare people and he was always just smiling,” Johnson said. “Raines was also the one who gave me my nickname – the Big Unit. I think he was around the batting cage and bumped into me with his hat down.” 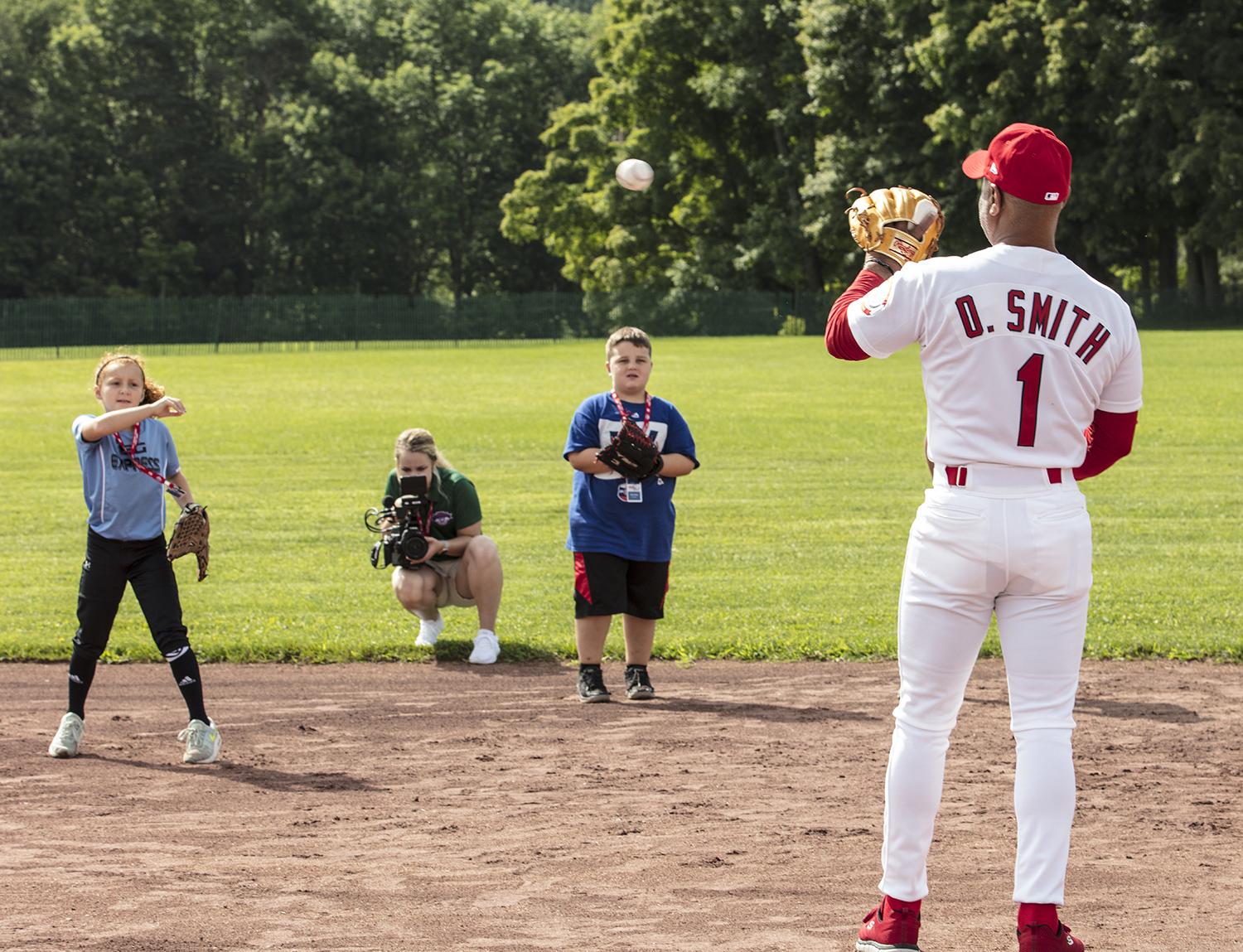 Ozzie Smith plays catch with a young fan on Friday in Cooperstown during the PLAY Ball event. (Milo Stewart Jr./National Baseball Hall of Fame and Museum)

The village of Cooperstown was also getting prepared for Induction Weekend, with Main Street closed off to traffic and fans walking around sporting jerseys of their favorite teams.

Hall of Famers such as Wade Boggs expressed a certain satisfaction in arriving for their annual July sojourn.

“It’s always great to come back to Cooperstown. It’s one of my favorite places. It’s a little heaven on earth. It actually lowers the blood pressure a little bit when you come up here,” Boggs said. “My wife Debbie and I for years – this is our 13th induction – we would go out on Thursday morning and fish. I caught a lake trout this morning – it was about four or five pounds. I love to fish and this lake is so diverse on species. You really don’t know what you’re going to get at any given time that the rod bends.”
Recalling his own induction, the longtime third baseman talked about family.

“Probably the look on my father’s face. That was when I was talking about him in my speech and looking over at him. And probably just the family in general, looking at my wife and she was tearing up,” Boggs said. “I think the biggest thing the new guys get out of this whole weekend is the part when they get to their family. Talking about the baseball part is easy, thanking your coaches and managers, but the minute you get to the family part is where it all hits home. Everybody has their own story and they get to share it with everybody, so it’s really touching.”

MLB Network’s Peter Gammons has spent his entire adult life writing about the game. Even he gets emotional talking about what Cooperstown means to him. 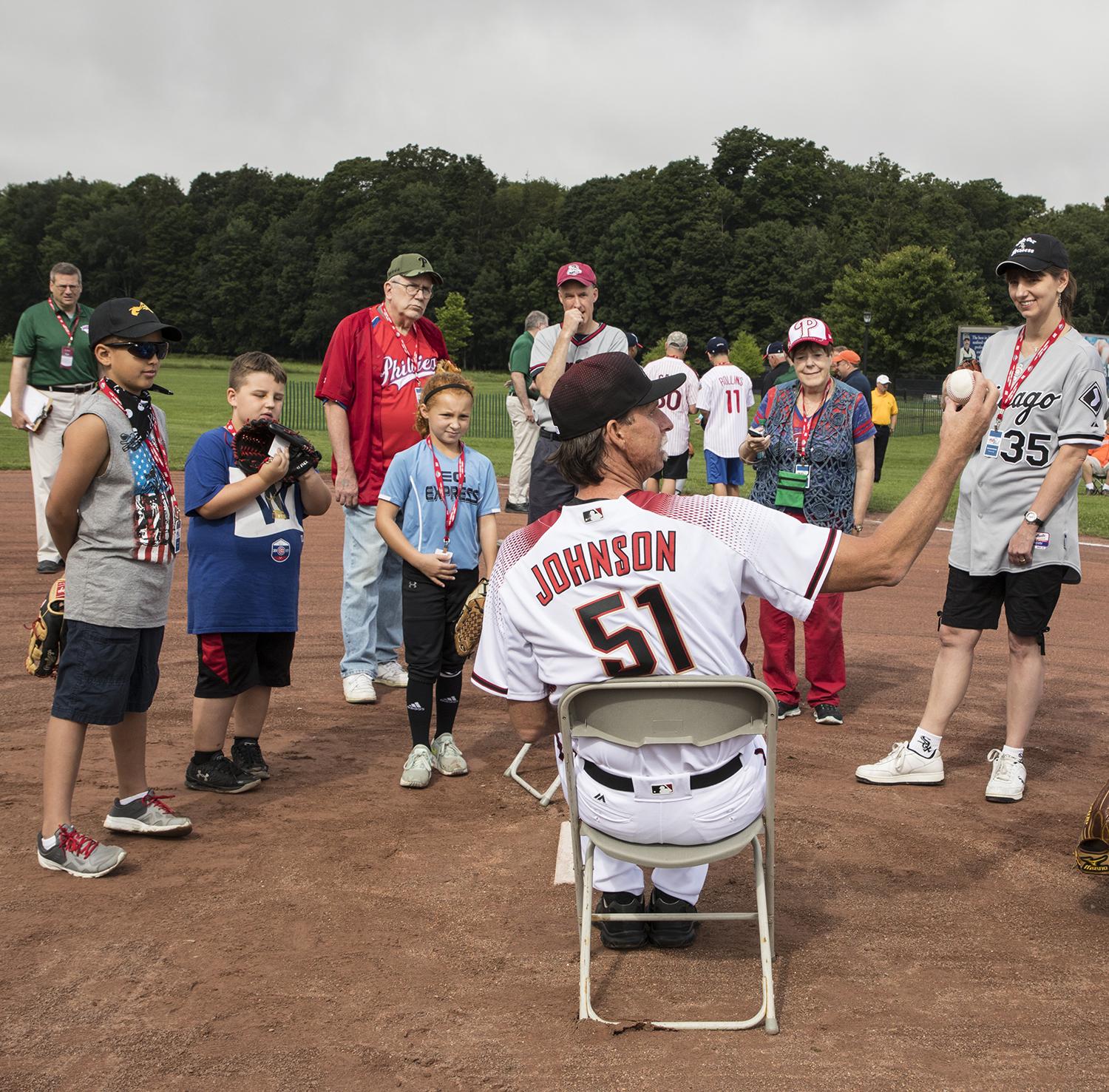 Hall of Famer Randy Johnson gives some pitching pointers to Museum supporters at the 2017 PLAY Ball event in Cooperstown. (By Photographer Milo Stewart Jr./National Baseball Hall of Fame and Museum)

“It’s one of the most special weekends of the year for me,” he said. “When I come down Route 80 and I first see the lake it brings back so many memories. Obviously, 2005 when I was honored with the Spink Award meant a lot. But every year is so much fun. It’s such a meaningful destination. Cooperstown isn’t really a village, it’s something in the baseball mind, something that everybody strives for.”

As for the three players being inducted this year, Gammons had his own perspective.

“For me, personally, Jeff Bagwell is one of my favorite players of all time. I saw him in a Cape Cod League home run hitting contest in 1988. He, Frank Thomas, Mo Vaughn were in it, and Dave Staton won it. Staton had nine career big league home runs and 1,298 home runs were hit by those other three guys,” Gammons said. “Tim Raines was also one of my favorites because of his joy, his laugh, that machine-gun laughter that he has. He was a really, really good player.

“Pudge Rodriguez, the thing I remember most was when I was doing an interview in Spring Training for ESPN with Joe Torre. And it really struck me that Joe, who has been around the game for a long time, mentioned something about Rodriguez, saying, ‘He’s got to be the best catcher in the history of baseball.’ it really struck me that Joe Torre would say that, because Joe doesn’t say things like that unless he really means them.”
Dodgers pitcher Don Drysdale was elected to the Hall of Fame in 1984, but passed away nine years later. His widow, basketball Hall of Famer Ann Meyers Drysdale, was in Cooperstown with her daughter Drew.

“Being here is always emotional for me. And it’s really special because I’m here with my daughter Drew and I get to see the guys that played with and against Don,” she said. “Don was only here one time, when he was inducted in 1984, because he was always working as a broadcaster when the induction was held. So to be back here and knowing what a special place Cooperstown is and being around the people that were part of Don’s life is pretty special.”

Brian Kenny is currently a broadcaster with MLB Network, and this year will be the Master of Ceremonies at this year’s Induction Ceremony for the first time.

“It will be exciting. Being up on the stage is a big move and I’m looking forward to it,” said the man who estimates he’s attended between 25 and 30 inductions over the years. “I told my wife I might be nervous and she told me I’m never nervous. Then is said,

‘Well, I haven’t done THIS before.’

“It really is a dream come true because I’ve been coming to the ceremony as a kid, as a media member, and I never envisioned I’d be standing be standing on the stage in any capacity. So to be up there and to be able to do the roll call of the Hall of Famers is a tremendous honor and thrill and I am looking forward to it.” 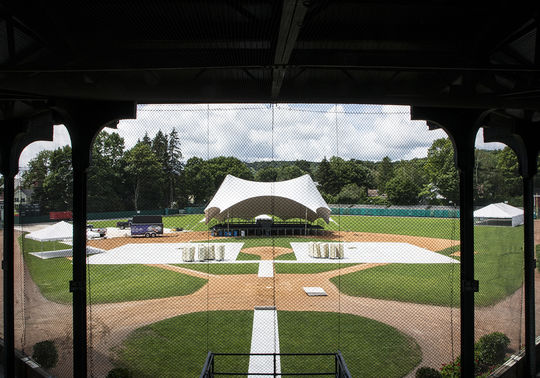 Doubleday Field will be the site of Saturday’s Hall of Fame Awards Presentation, where Rachel Robinson will receive the Buck O’Neil Lifetime Achievement Award, Claire Smith will receive the J.G. Taylor Spink Award and Bill King will be posthumously honored with the Ford C. Frick Award. (Milo Stewart Jr./National Baseball Hall of Fame and Museum) 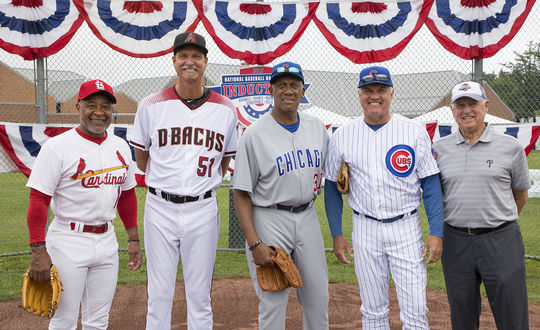 Also on Saturday, the Hall of Fame Parade of Legends returns for an eighth year to provide fans with more thrills. Hall of Famers will ride down Main Street in trucks provided by Ford Motor Company en route to a private reception at the Museum during the 6 p.m. parade, immediately following the Awards Presentation.

The Sunday, July 29 Induction Ceremony will take place on the grounds outside of the Clark Sports Center, which is located on lower Susquehanna Avenue, unless severe weather cancels the event. Follow the @baseballhall on Facebook, Twitter, Instagram and Snapchat for the latest updates.