In 1975, the Cincinnati Reds and Boston Red Sox played a World Series that revitalized baseball by captivating a new generation of fans.

Fourteen years later, two of the stars of that World Series – the Reds’ Johnny Bench and the Red Sox’s Carl Yastrzemski – thrilled another huge audience as they earned induction into the Hall of Fame in Cooperstown.

For Bench and Yastrzemski, that 1989 journey to their Hall of Fame induction began on Jan. 9, 1989, when they were elected by the Baseball Writers’ Association of America.

For both Bench and Yastrzemski, election to the Hall of Fame came in their first year eligible – and surprised no one.

Bench received 96.4 percent of the vote – at the time the third-highest vote percentage in history – while Yastrzemski polled 94.6 percent.

Yastrzemski played 23 years for the Red Sox, earning 18 All-Star Game berths as one of the most consistent players of the last half of the 20th Century. 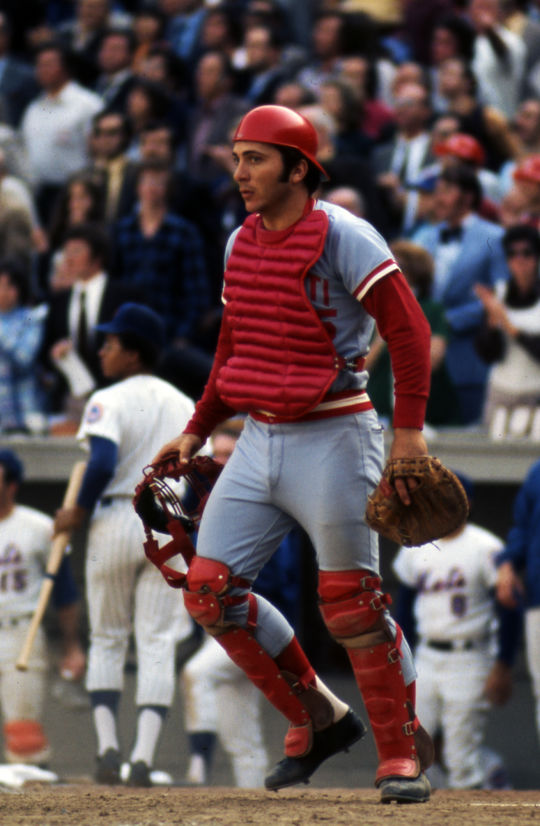 Johnny Bench won 10 Gold Glove Awards behind the plate during his 17 seasons with the Cincinnati Reds. (Richard Raphael/National Baseball Hall of Fame and Museum)

“We try everything on Yaz and nothing works,” said Yankees catcher Elston Howard, who later became Yastrzemski’s teammate with the Red Sox. “The only thing you can do against him is pitch him tight and hope.”

In 1967, Yastrzemski took home the American League Most Valuable Player Award after winning the AL Triple Crown and leading the Red Sox to their Impossible Dream pennant. One year later, Bench began his record-setting run by winning the National League Rookie of the Year Award.

By 1970, Bench was widely hailed as the game’s top all-around catcher – winning the first of two NL MVPs by hitting 45 home runs and driving in 148 runs. 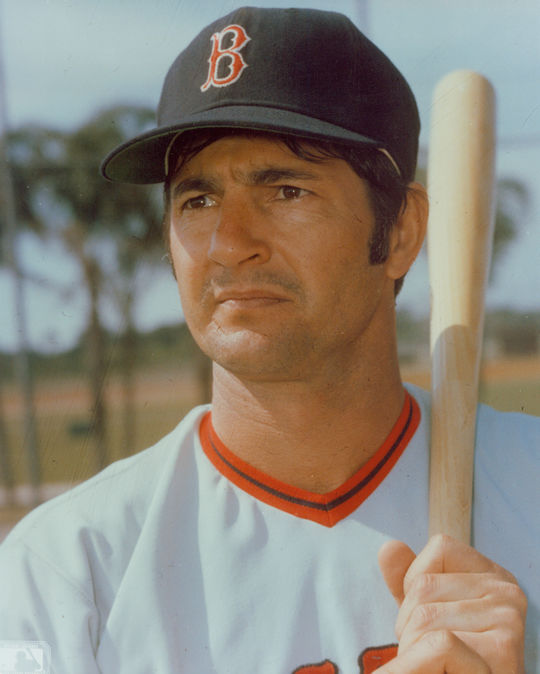 An 18-time All-Star in his 23 seasons with the Red Sox, Carl Yastrzemski was elected to the Hall of Fame in 1989. (National Baseball Hall of Fame and Museum)

Bench was named to 14 All-Star Games and won 10 Gold Glove Awards in his 16 full big league seasons with the Cincinnati Reds.

The Reds and the Red Sox squared off in the 1975 World Series, which featured Carlton Fisk’s Game 6 walk-off home run and then saw the Reds rally to win Game 7 and clinch the title. The huge television audience for the final two games marked the beginning of a period of growth that is still powering the National Pastime. 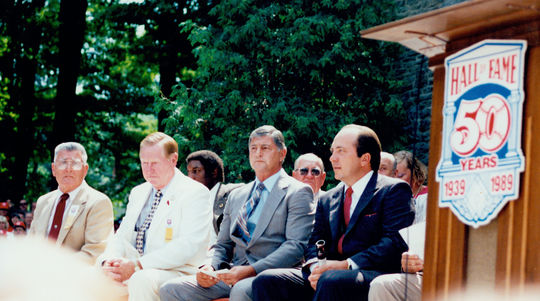 The members of the Hall of Fame Class of 1989 (from left) Al Barlick, Red Schoendienst, Carl Yastrzemski and Johnny Bench gathered for their induction on July 23, 1989, in Cooper Park adjacent to the Hall of Fame. (National Baseball Hall of Fame and Museum)

At the 1989 Hall of Fame Induction Ceremony in Cooperstown, Bench and Yastrzemski helped draw a record crowd to the Hall of Fame to watch the Class of 1989 – which also included umpire Al Barlick and second baseman Red Schoendienst – celebrate its moment in the sun. 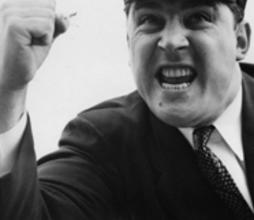