#Popups: Baseball’s greatest hit is ‘Take Me Out to the Ballgame’

Baseball and pop culture have intersected in America for more than a century. The National Baseball Hall of Fame and Museum takes a look at these cross-over stars and events in our web feature #Popups.

Prior to 2016, the most recent World Series appearance by the Cubs was not exactly recent. When the Cubs were last reigning National League champions, the National Basketball Association was founded. When the Cubs last won the National League Pennant in 1945, most US servicemen from the Pacific Theater were still not returned from war. Japan had only surrendered to end World War II one month and one day before the start of game one of the Word Series. To say the Cubs had not been to the Fall Classic in a while is an understatement. 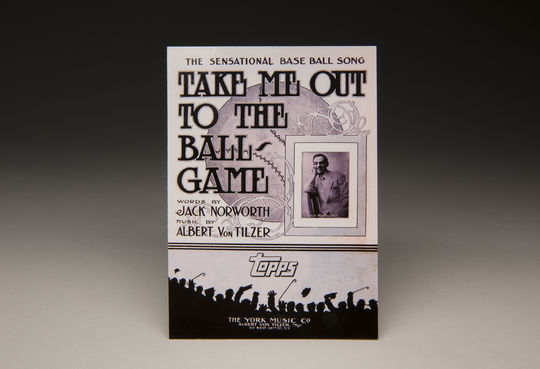 In 2008, to celebrate the centennial of the song, Topps released in its Highlights and Updates a “Take Me Out to the Ball Game” card. (Milo Stewart Jr. / National Baseball Hall of Fame)

When the Cubs were last reigning World Series Champions, The Ottoman Empire had not yet fallen, World War I was still on the distant horizon, Presidential first pitches weren’t yet a tradition and there was not yet an office of the Commissioner of Baseball. The National League was 32 years old, and the American League a mere 7. Baseball was only 39 years removed from the first professional team, the 1869 Cincinnati Red Stockings. 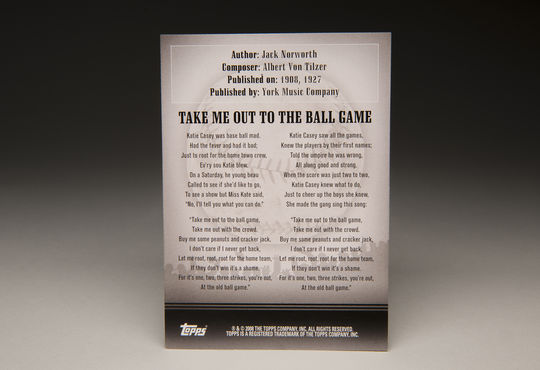 The 2008 "Take Me Out to the Ballgame" Topps card features the Sheet music cover on the front, and on the reverse, information about the song and the 1908 lyrics. (Milo Stewart Jr. / National Baseball Hall of Fame)

Today the song has permeated baseball and American culture (as well as several other nations) at an incredible level. Across the nation and world, the 7th Inning Stretch is rung in by playing of the iconic song. While each stadium and team may have their own traditions regarding how the song is sung, or if the line “home team” is replaced with the team name, “Take Me Out to the Ball Game” is a song that can (for a minute) unite fans of even the largest rivals.

“Take Me Out to the Ball Game” has even made a cultural impact in Japan. In addition to ballparks, it is not uncommon to hear the tune playing over the speakers in public transportation or in elevators.

The song has been featured in countless television and radio broadcasts. However, most notably the song was played continuously on WJMP of Kent, Ohio, during the 1994 Major League Baseball strike. The all-sports station used the song to protest the strike which left us without a 1994 World Series. 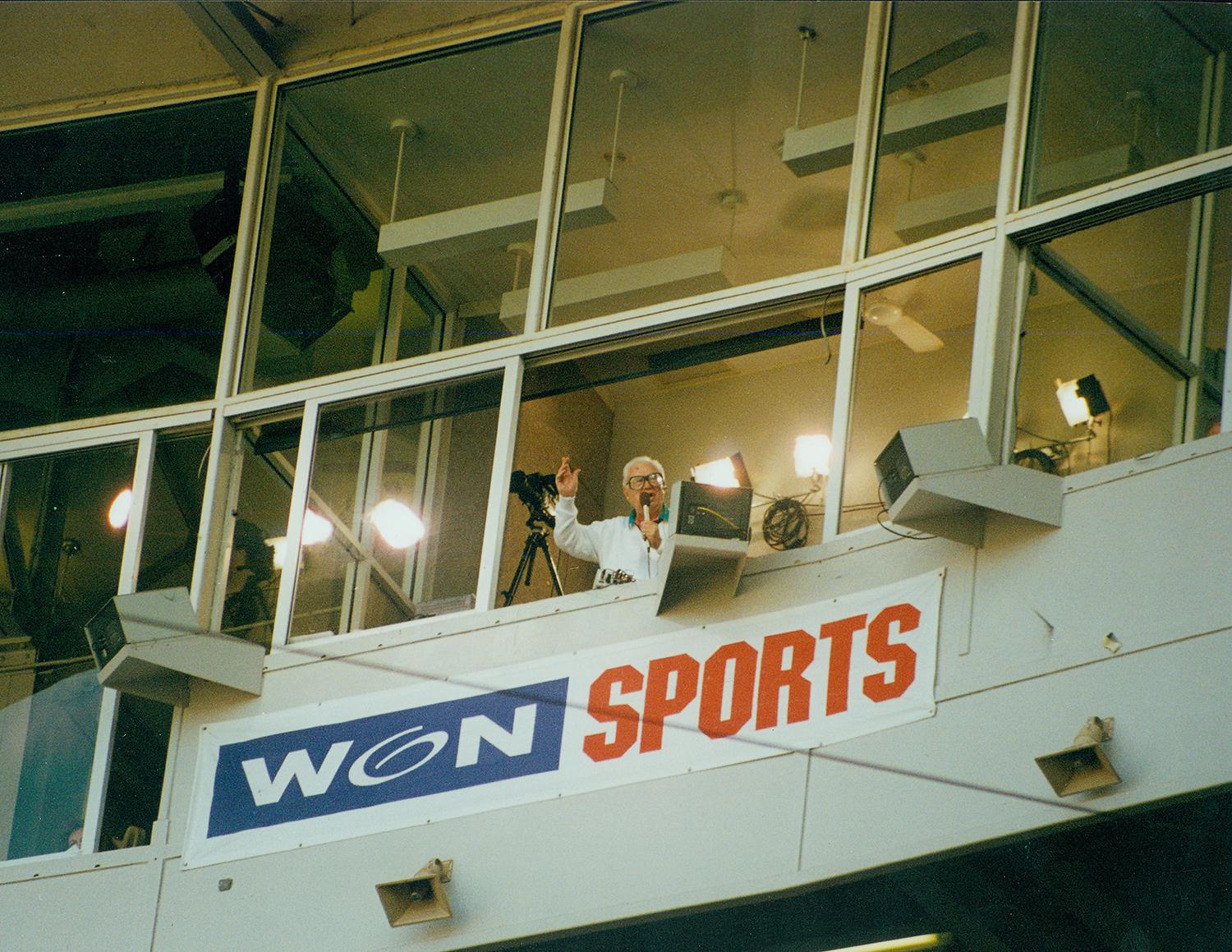 Harry Caray's rendition of "Take Me Out to the Ballgame" became a long-standing tradition at Cubs games. (National Baseball Hall of Fame)

While most people know the chorus to the song, the verses and the history of the song are much less known. The song consists of two verses and two choruses. It was written by Jack Norworth and composed by Albert Von Tilzer. The two were music creators from iconic Tin Pan Alley. Interestingly, neither man had ever attended a baseball game at the time of the writing of the song.

The song follows a young lady by the name of Katie Casey. Katie is asked by her “young beau” if she would like to go a show, to which Katie replies “no, I’ll tell you what you can do” then the famous chorus breaks. Katie’s bravado would be endured today as verse two teaches us that knows all the players by first name, she heckled the umpire “good and strong” all game long.

However, Lyricist Jack Norworth rewrote the verses to the song in 1927. In this version a woman by the name of Nelly Kelly is asked by her boyfriend if she would like to go to Coney Island (in Brooklyn) to this, Nelly began to “fret and pout. And to him I heard her shout” at this point the classic chorus cuts in.

It is interesting that both versions focus on young ladies who wish to attend baseball games while their male suitors desire to go elsewhere. Usually baseball songs tend to focus on the men or boys who play the game, not the ladies in the stands. The reason for this, however may be explained by one simple fact: Jack Norworth had never attended a baseball game at the time he wrote either version of the song.

The old adage, “Write about what you know” must have struck true with Norworth. The prolific lyricist wrote many well-known songs about courtship and only a few about baseball. Thus, it makes sense that the song’s protagonist would be a fan and a young woman. 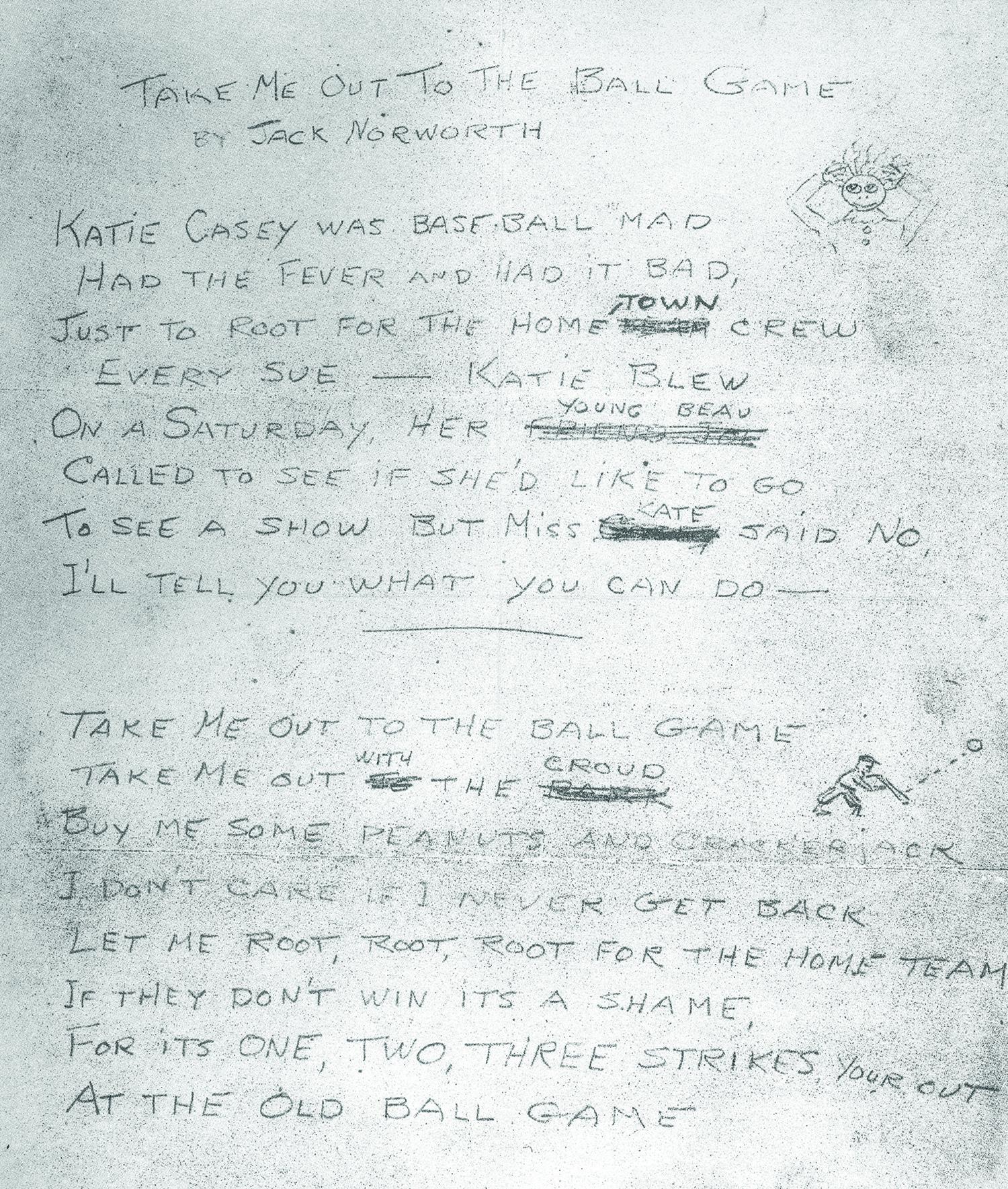 Jack Norworth wrote the lyrics to "Take Me Out to the Ballgame" before he ever witnessed a baseball game. (National Baseball Hall of Fame)

One thing is for sure, the Cubs do “Take Me Out to the Ball Game” differently than any other team. This is, oddly, in thanks to (then White Sox owner) Bill Veeck and Harry Caray. According to White Sox accounts, while Caray was an announcer for the team, he would often sing “Take Me Out to the Ballgame” in the booth, for his own amusement. One day, Veeck placed a mic in the booth for the sole purpose of letting fans hear Caray. The unsuspecting Caray was shocked to hear his own voice over the stadium PA speakers. Veeck reportedly stated that if fans heard Caray’s (notoriously bad) singing, they too would join in. When Caray made the jump across town to work with the Cubs, the tradition followed.

The song is even honored by the National Baseball Hall of Fame by having the original lyrics sheet and published sheet music in its collection, in addition to also having large facsimiles on display for all to see. While the song cannot be inducted into the Hall of Fame, or win any of its awards, the tune has its rightful place in Cooperstown.

Meanwhile, the National Endowment for the Arts and the Recording Industry Association of America named it one of the top 365 songs of the century. Additionally, in 2010 the first recorded version of the song, performed by Edward Meeker, was added to the Library of Congress’s National Recording Registry.

From the friendly confines of Wrigley Field, to baseball cards, to the Library of Congress, and even Japanese elevators, you never know where the 1908 hit “Take Me Out to the Ball Game” will appear. 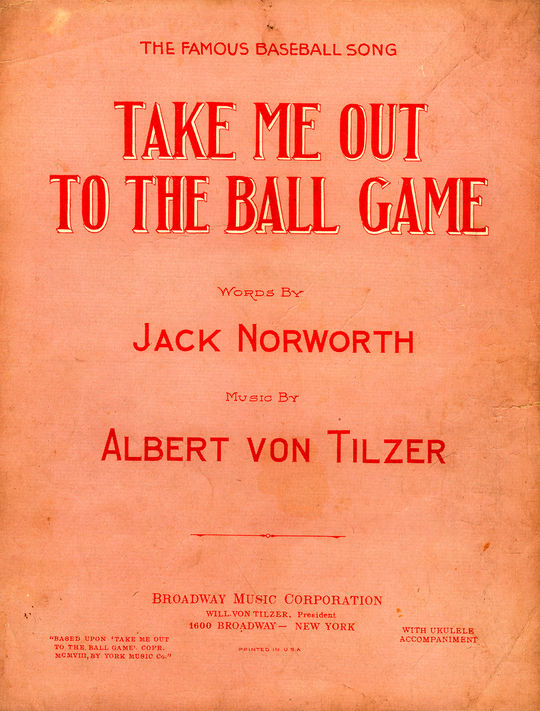 The Hall of Fame collection has many different versions of "Take Me Out to the Ballgame" in its collection. (National Baseball Hall of Fame) 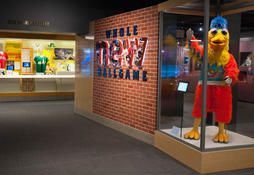 Popular Culture: Take Me Out to the Ballgame

Recognize that the experience of a baseball game involves many aspects of popular culture. 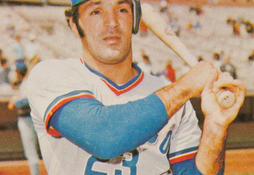 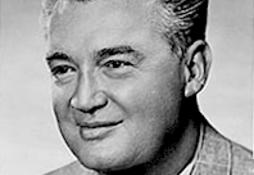