When it was announced that Ichiro Suzuki would be traded from the Seattle Mariners to the New York Yankees on July 23, 2012, fans and even Mariners players were shocked. He would be leaving after 12 years with the Mariners.

Remarkably, the trade occurred when the Yankees were in Seattle, and Ichiro played that same night as a Yankee for the first time. Yet despite this unexpected trade in the middle of the season, Mariners fans could not hold back their devotion, giving him a standing ovation when he came up to bat in the third inning for the Yankees. He bowed to the crowd. His decision, Ichiro’s agent Tony Attanasio explained, was that he “knows the club has to grow. He knows the youngest players need more playing time. The only way he knows how to do that is to move on, because he doesn’t want to stop playing.”

Ben Gibbard, the frontman for the indie-rock band Death Cab for Cutie, released a song, Ichiro’s Theme, in honor of Ichiro that same day. “I wrote this a few years ago,” he explained. “Today seems like the best day to let you all hear it. Thank you, Ichiro.”

Gibbard, a fan of the Mariners since he was five years old, fondly remembers riding the ferry across Puget Sound to see games at the now-demolished Kingdome. Death Cab for Cutie performed at the 2010 Mariners Opening Day. 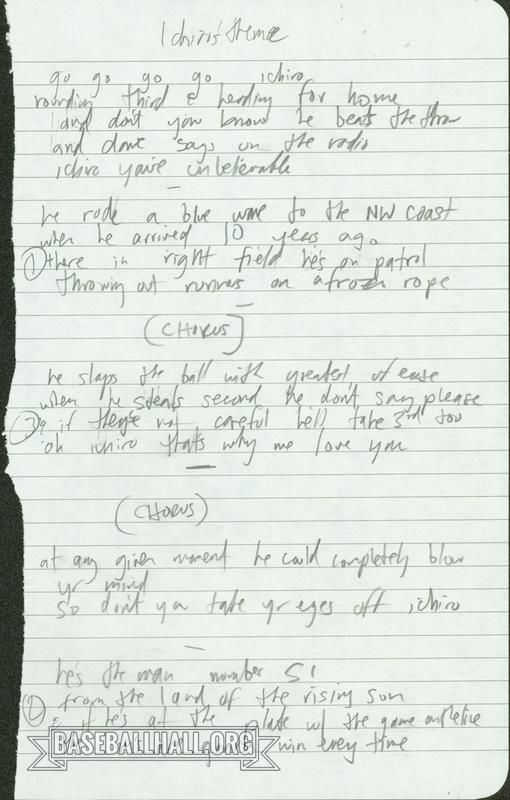 Ben Gibbard, the frontman for the indie-rock band Death Cab for Cutie, released a song, Ichiro’s Theme, in honor of Ichiro Suzuki in 2012. PASTIME (National Baseball Hall of Fame and Museum)

The song is a celebration of Ichiro’s hitting, fielding and speed. There is even a reference to the late announcer Dave Niehaus, another Seattle icon and the 2008 Ford C. Frick Award winner. While this song of devotion may seem overdramatic, fans’ enthusiasm and respect for Ichiro is nothing to gloss over. Rather than anger when the trade was announced, there was both sadness and understanding. Despite Ichiro’s accomplishments, the Mariners never made it to the World Series with him. The Mariners’ chief executive at the time, Howard Lincoln, explained that Ichiro “deserves a chance to play for a contending team before the end of his magnificent career. The Mariners should certainly not stand in his way.”)

Yet even as he later went from the Yankees to the Marlins, Mariners’ fans still cheered for him every time he returned to Safeco. When the Marlins were in Seattle in April 2017, the Mariners held a bobblehead night featuring their former star. When Ichiro hit an infield single, the crowd chanted his name as if he were still on the team. Ichiro signs were held up. Then, in his final at-bat of the game, he hit his first home run of the year. The crowd cheered wildly, giving him a standing ovation while chanting his name even after he disappeared into the dugout. Ichiro also became emotional after his home run. A couple days earlier, he had proclaimed that Safeco will “always be home.” 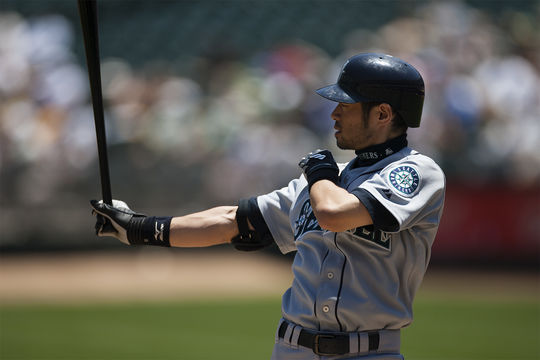 Ichiro Suzuki played for the Seattle Mariners from 2001-12 before he was traded to the New York Yankees. (Brad Mangin/National Baseball Hall of Fame and Museum)

Gibbard’s song demonstrates Seattle’s enduring love for Ichiro that continued even when he wasn't slapping infield singles and stealing bases for the Mariners.

Gibbard’s hand-written lyrics (which are missing the last verse) are part of the National Baseball Hall of Fame and Museum’s collection of more than three million library items. 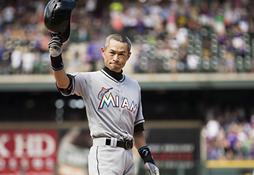 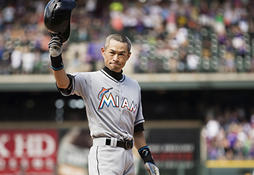 10-Time All-Star Outfielder Has Donated More Than Two Dozen Artifacts to Museum During His Career.