The ability to play baseball is innate. The pure athleticism and control of Jim Abbott secured his position as the California Angels’ 1988 first-round draft pick, even though he was born without a right hand. Disregarded in over 70 percent of the team’s preferential draft lists, Abbott went on to become one of only three pitchers during his decade to win their first professional game.

Abbott’s control and understanding of his body from an early age fostered the success of his unique style of both pitching and catching with his left hand.

In preparation for the 1988 draft, the Angels compiled 19 preferential lists, each completed by a separate scout. Out of these 19 hierarchies, Abbott’s name appeared six times, once at the top position. Individual scouting reports of this player, conducted by scouts Steve Gruwell and George Bradley, offer an estimated valuation of 100,000 and 150,000 respectively. Neither mention that Abbott lacks a right hand. 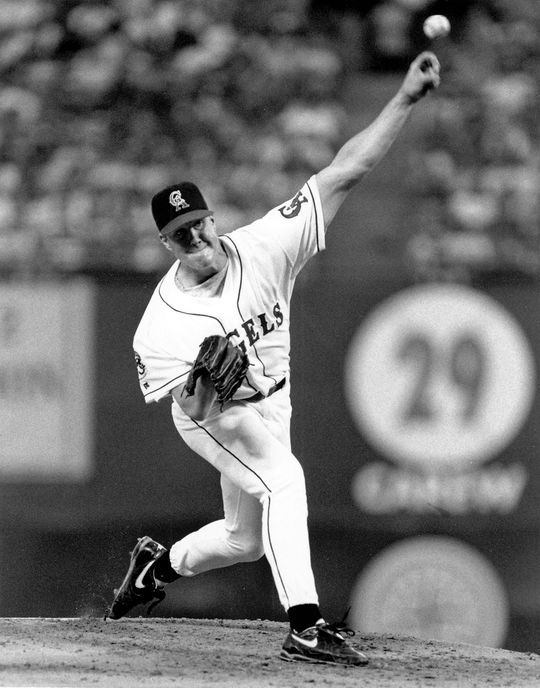 Pitcher Jim Abbott played for the California Angels for six seasons of his 10-year career. (National Baseball Hall of Fame and Museum)

Praised by scout Nick Kamzic for his well-proportioned, strong pitcher’s body, Abbott developed his confidence on the mound over time. Pitching a complete game during the 1988 Olympics, winning the United States a gold medal over Japan, Abbott went on to become the first Yankees pitcher to throw a no-hitter in a decade. But even after Abbott captured the attention of both the nation and the world, Abbott had to prove himself every time he stepped onto the mound. 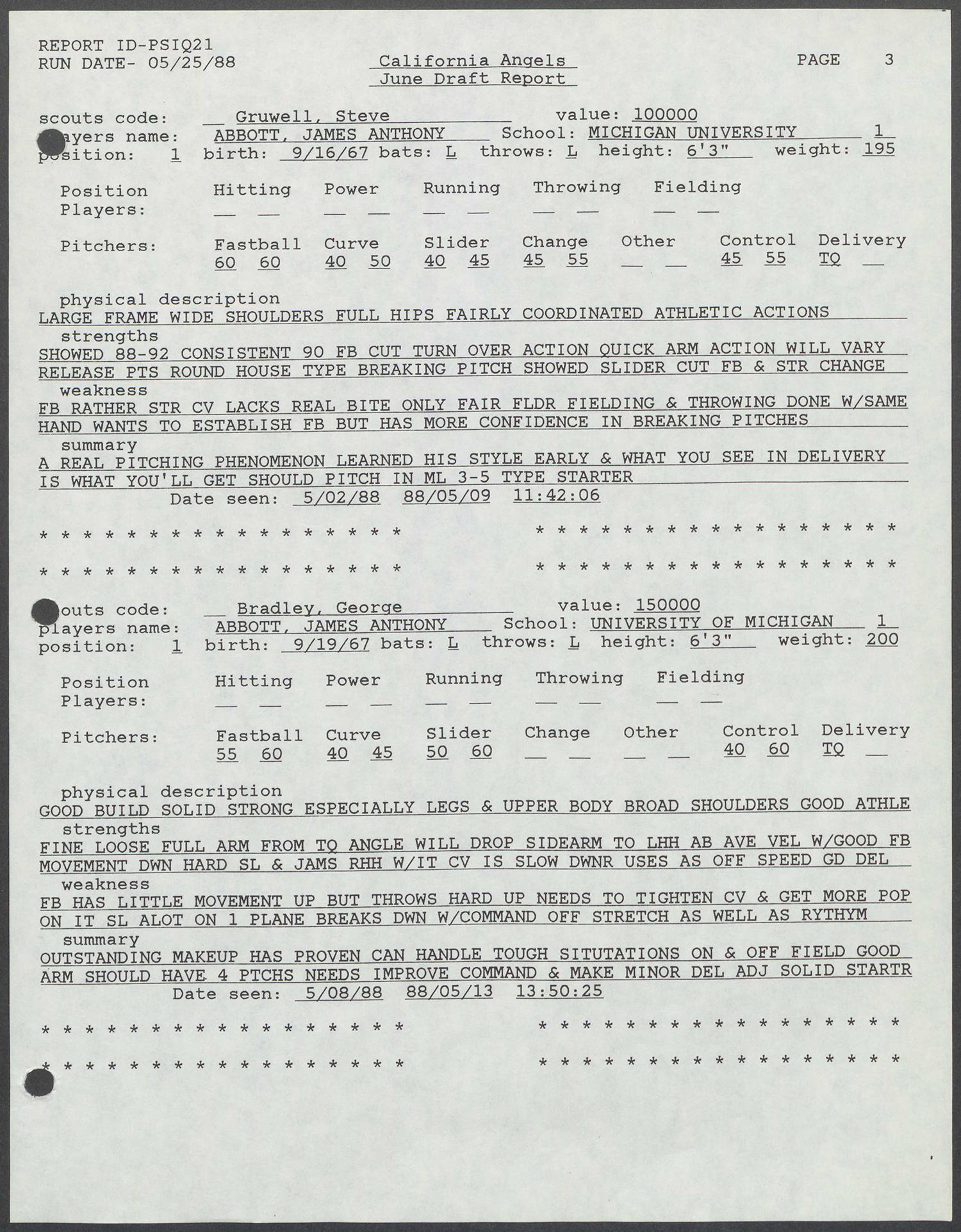 Of the individual scouting reports of Jim Abbott conducted by Angels scouts Steve Gruwell and George Bradley, neither mention that Abbott lacks a right hand. PASTIME (National Baseball Hall of Fame and Museum)

With a 93 mph fastball, his natural ability was undeniable. But he was ignored by the majority of scouts due to his physical condition, leaving Abbott the eternal underdog. Abbott’s career represents that other, unquantifiable side of baseball. It was his heart, his determination, and his passion that bridged the gap between expectations and reality. Abbott’s confidence in his own ability and his sheer determination is what led to his success.

Abbott possessed that rare, remarkable quality that is difficult to qualify. He had panache, the “it” factor, that je ne sais quoi aspect about his playing. Regardless of what language or term you use, it was the key to his success. That quality was his power, an element of his game that does not translate to numbers and figures, something that cannot be typed out and notated on a scouting report. This natural confidence, style, and ability that is awe inspiring was Abbott’s secret weapon, not his fastball. This intrinsic quality is what allowed Abbott to do what others deemed impossible. Scouts, Bradley Gruwell, and Kamzic, who all placed Abbott on their preferential draft lists, recognized this quality. The scouting reports of Bradley, Gurwell and Kazmic are preserved – along with thousands of others – in the PASTIME online database. 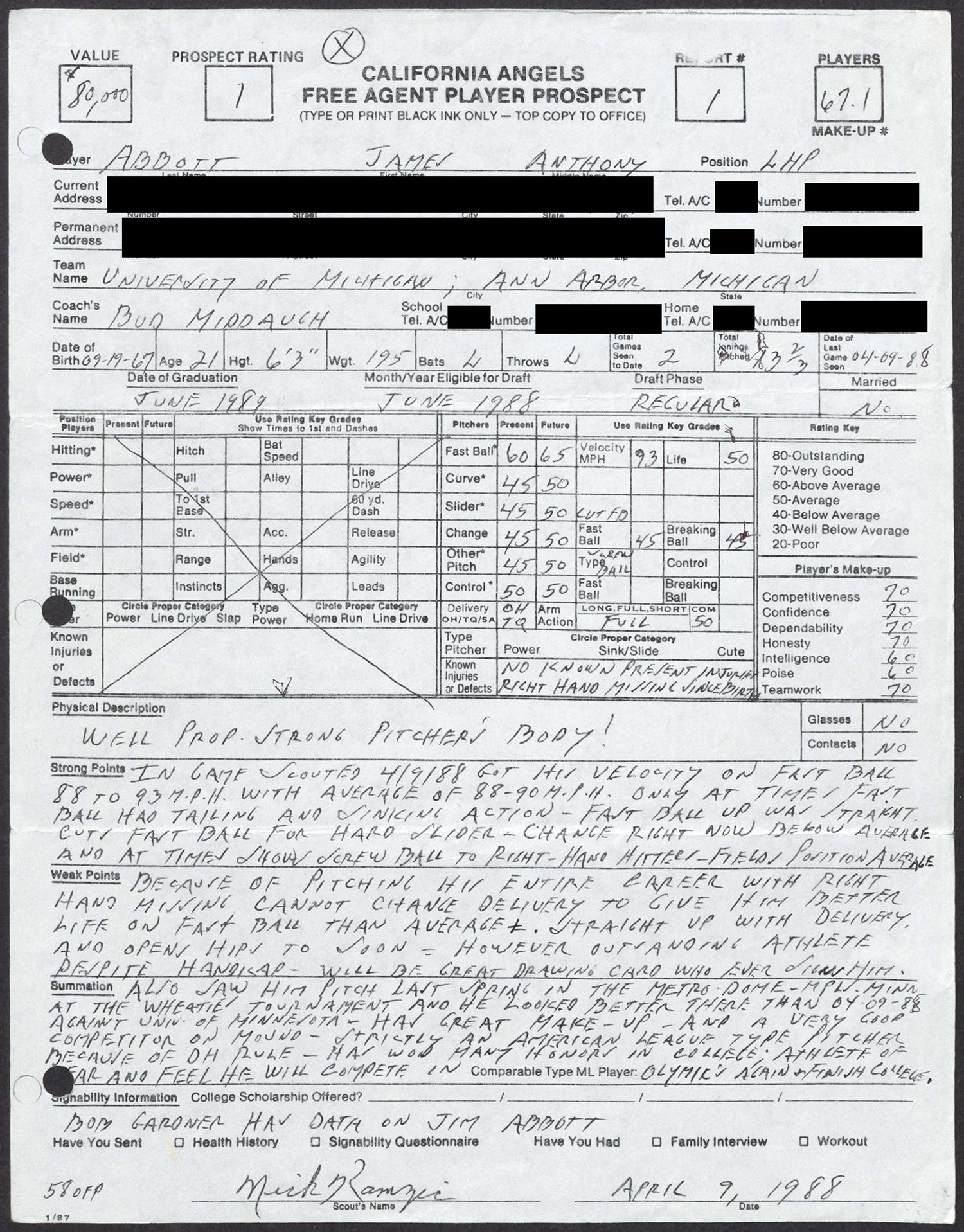 He, still today, presents a flawed public image to an international audience. A flaw that – among other exploits – allowed him to become the first American pitcher to defeat Cuba, in Cuba, in 25 years.