Part of the SHORT STOPS series
Written by: Mickey Lanning

Serendipity and the Chicago Cubs found photographer George Burke in 1929.

As manager Joe McCarthy searched for the team’s previous photographer, named Francis Burke, he instead came across George’s studio in the Chicago phone book. Seeing that the studio was just a 15-minute walk from Wrigley Field, McCarthy invited George to become the team’s official photographer, igniting what would become a distinguished baseball photography career.

Though Burke enthusiastically took on the role, he did not know much about the game itself and therefore hired and mentored a young baseball enthusiast by the name of George Brace. Together, they became a team and a permanent fixture of both Wrigley Field and Comiskey Park.

Within just a couple years, Burke and Brace became the official photographers of the Cubs, the White Sox, and even the National Football League’s Chicago Bears. Over the course of their career, they assembled a photographic portfolio of player portraits from several American and National League teams outside of Illinois as they passed through Chicago’s stadiums and stomping grounds. Although Burke’s photographic career ended after he suffered a heart attack in 1948 and died in 1951, Brace continued taking photographs until the 1990s. Combined, Burke and Brace captured thousands of portraits of baseball players across most of the 20th century, forging their legacy in the history of baseball photography.

The George Burke and George Brace photographic materials, located in the Dean O. Cochran, Jr., Photograph Archives, contains thousands of original negatives created by Burke and Brace between 1929 and approximately 1951. These negatives are an invaluable resource for researchers who may be interested in the evolution of uniform design during this time period or who seek to trace the career trajectories of certain players. As players traveled to Chicago to play against the Cubs or the White Sox, Burke and Brace photographed many individual players on almost every team over the course of 20 years. 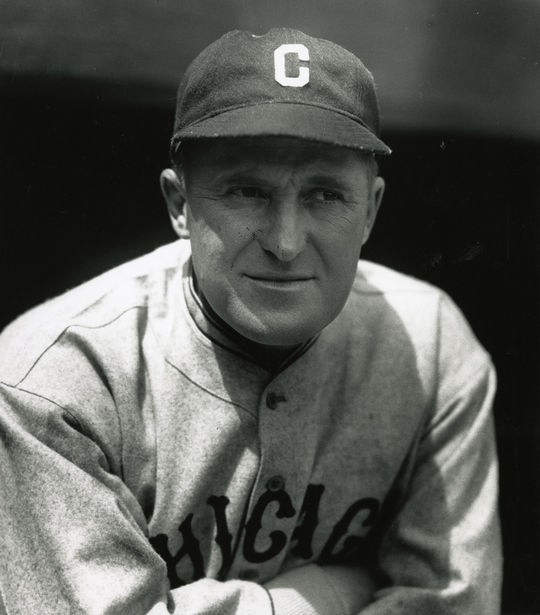 Near the end of Burke’s career, a major international event changed the face of baseball for several years: the Second World War. More than 500 players from the major leagues were either drafted or enlisted in various branches of the U.S. military. Even Brace answered the call to serve and became a U.S. Army medic in the South Pacific for the duration of the war.

Between 1942 and 1946, Burke extended his photographic range beyond the majors and minors and took portraits of baseball players who found themselves playing in Wrigley or Comiskey on unofficial teams. In fact, one of the best baseball teams (official or otherwise) of the 1940s found its home just outside of Chicago — and no, it wasn’t the Cubs or the White Sox.

As the war escalated after the attack on Pearl Harbor at the end of 1941, the Great Lakes Naval Training Station (GLNTS) in Illinois ultimately “housed more than a third of all incoming naval recruits” and received many major leaguers. There were so many major leaguers on base at any given time that an inevitable joke developed: “You could throw a baseball anywhere on the station and at least two big leaguers will try to catch it.” 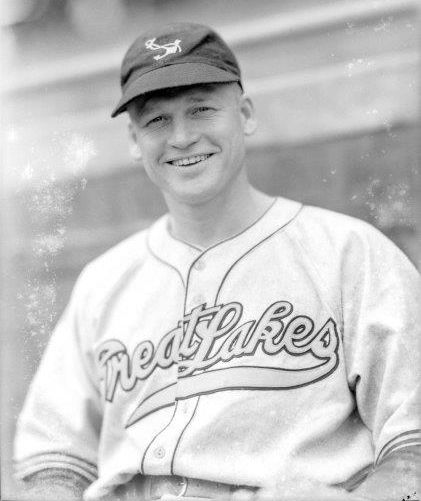 Benny McCoy was one of hundreds of big leaguers whose career was shortened by military service during World War II. (George Burke/National Baseball Hall of Fame and Museum)

In the face of homesickness and a longing to return to home plate, the GLNTS developed an athletics division and baseball team to boost morale, naming themselves the Great Lakes Bluejackets. Team leader and former major leaguer Lt. Mickey Cochrane expressly declared that, though the Bluejackets’ roster was consistently impressive throughout the war years, the players “are in the Navy to help win a war and not to perfect their baseball.” However, that didn’t stop the star-studded team from competing and winning against big league teams like the Cubs.

According to the Puget Sound Navy Museum, over the course of three wartime seasons, “the Great Lakes Bluejackets accumulated a 188-32 record.” Despite the fact that players were often reassigned to different bases around the world, the team maintained a steady and sturdy roster, and at the end of the war could boast having hosted 43 Major Leaguers, six All-Stars and several future Hall of Famers.

Because of both the proximity to Chicago and the occasional matchup of the Bluejackets against the Cubs, the naval baseball team eventually found itself on the other end of Burke’s camera. Many of the players that served on the Bluejackets team at some point during their wartime service are represented photographically in the George Burke photographic materials collection, but only a handful are shown in their Great Lakes uniform. Among these are major leaguers Benny McCoy, Don Padgett and Frankie Pytlak.

Benny McCoy entered the Major Leagues in 1938, spending two seasons with the Detroit Tigers before becoming a free agent in 1939 and accepting an offer from the Philadelphia Athletics. On Feb. 5, 1942, at the age of 24, McCoy enlisted in the U.S. Navy as a coxswain and was stationed at the GLNTS until the end of that year. He was eventually transferred to the Norfolk Training Station in 1943 and was sent to Australia at the end of the 1944 baseball season.

As Lt. Cochrane asserted, the Great Lakes players were not in the service to play baseball; playing baseball might help them maintain their athleticism, but their primary focus was to be on their naval duties. When McCoy was discharged from the Navy at the end of 1945, he was not able to successfully return to the majors. 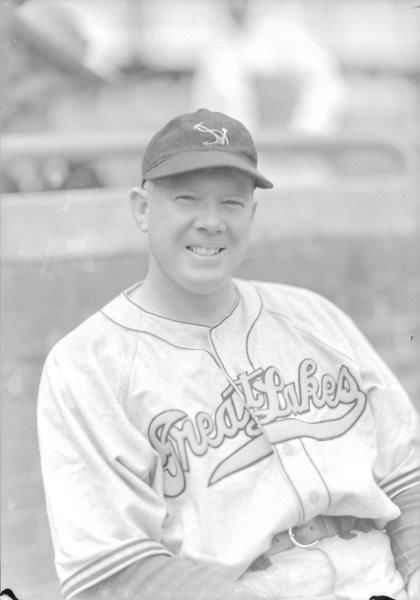 Don Padgett starred for the Great Lakes Bluejackets during World War II. In 1939 with the St. Louis Cardinals, Padgett batted .399 in 92 games. (George Burke/National Baseball Hall of Fame and Museum)

Don Padgett began his big league career in 1937, spending five seasons with the St. Louis Cardinals before being sold to the Brooklyn Dodgers in 1941. In 1939, Padgett hit .399 in 92 games with the Cardinals, including 61 as a catcher. No catcher in the modern era (post 1900) has hit at high as .370 in while appearing in at least 40 games behind the plate.

Padgett joined the Navy in March of 1942 and found comfort playing in the outfield for the Bluejackets, leading the squad in hitting as he batted .336 before relocating to the Norfolk Training Station in 1943. He traveled overseas in 1944 to New Guinea, Australia, and the Admiralty Islands. Unlike McCoy, Padgett returned to finally play with the Dodgers in 1946 but he did not stay there long. The Boston Braves acquired Padgett for the remainder of the 1946 season, and he ultimately ended his major league career with the Philadelphia Phillies in 1948.

Frankie Pytlak spent the majority of his major league career with the Cleveland Indians, from 1932 until 1940. 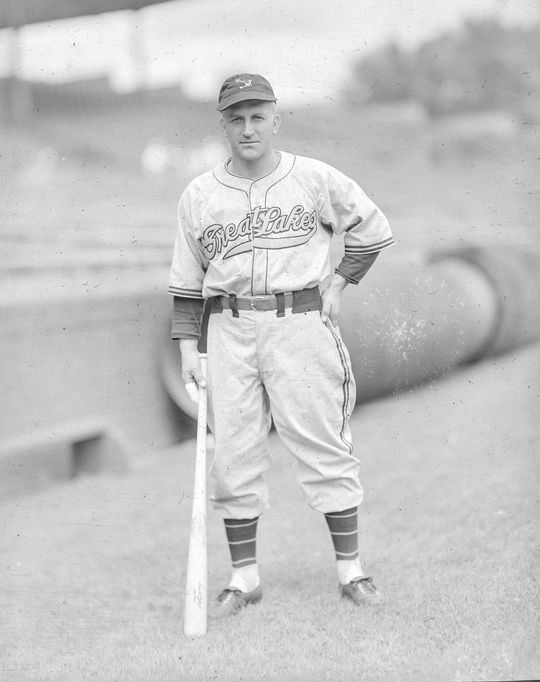 Frankie Pytlak played in the big leagues for 12 seasons, also spending time during World War II as a member of the Great Lakes Bluejackets of the Great Lakes Naval Training Station. (George Burke/National Baseball Hall of Fame and Museum)

After the end of the 1941 season, which he spent with the Boston Red Sox, Pytlak suspected his imminent draft into the military, so he did what any athlete would do: He called up Lt. Mickey Cochrane at Great Lakes and asked to join the athletic division.

Pytlak joined the division in April of 1942, spending the summer as a Bluejacket and batting .319 in 40 games. Early on in 1943, Pytlak transferred to Buffalo, where he would remain until the end of the war in 1945. Though he rejoined the Red Sox upon being discharged, he was only able to play nine games before the season ended, and in the following 1946 season he only appeared in four games. In August of 1946, when Pytlak was 38 years old, the Red Sox released him.

The George Burke photographic materials collections documents the careers of many wonderful players from the early history of the game. In the cases of those players who served on the Great Lakes Naval baseball team, Burke often captured players who would soon be at the end of their baseball careers. Furthermore, these photographs provide a unique perspective of baseball outside of the major and minor leagues.

These pictures freeze in time the moments where players were both within and outside of the world of baseball, as their service to their country and their passion for the game came together to fuel their participation in both. As it intertwines with the history of the Great Lakes Bluejackets and the lives of its players, George Burke’s legacy as an amazing baseball photographer is solidified and the collection demonstrates its value as an essential part of the Hall of Fame’s photographic archives. 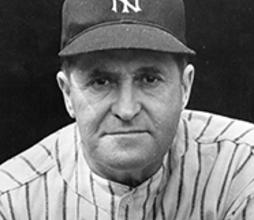 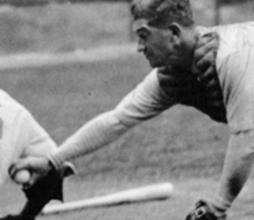 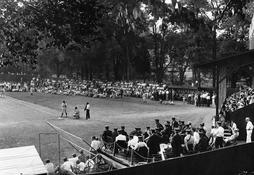 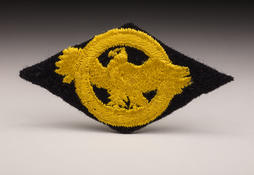 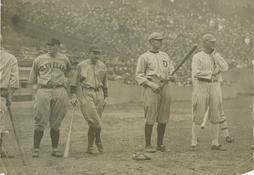 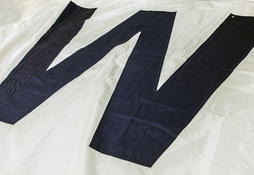 The tradition of the Cubs' "W" flag is preserved through artifacts at the Hall of Fame.