Part of the SHORT STOPS series
Written by: Tom Shieber

Celebrity. Adulation. Promotion. Each are quintessential elements of the Roaring Twenties and each are captured in this intriguing photo from the collection of the National Baseball Hall of Fame and Museum. 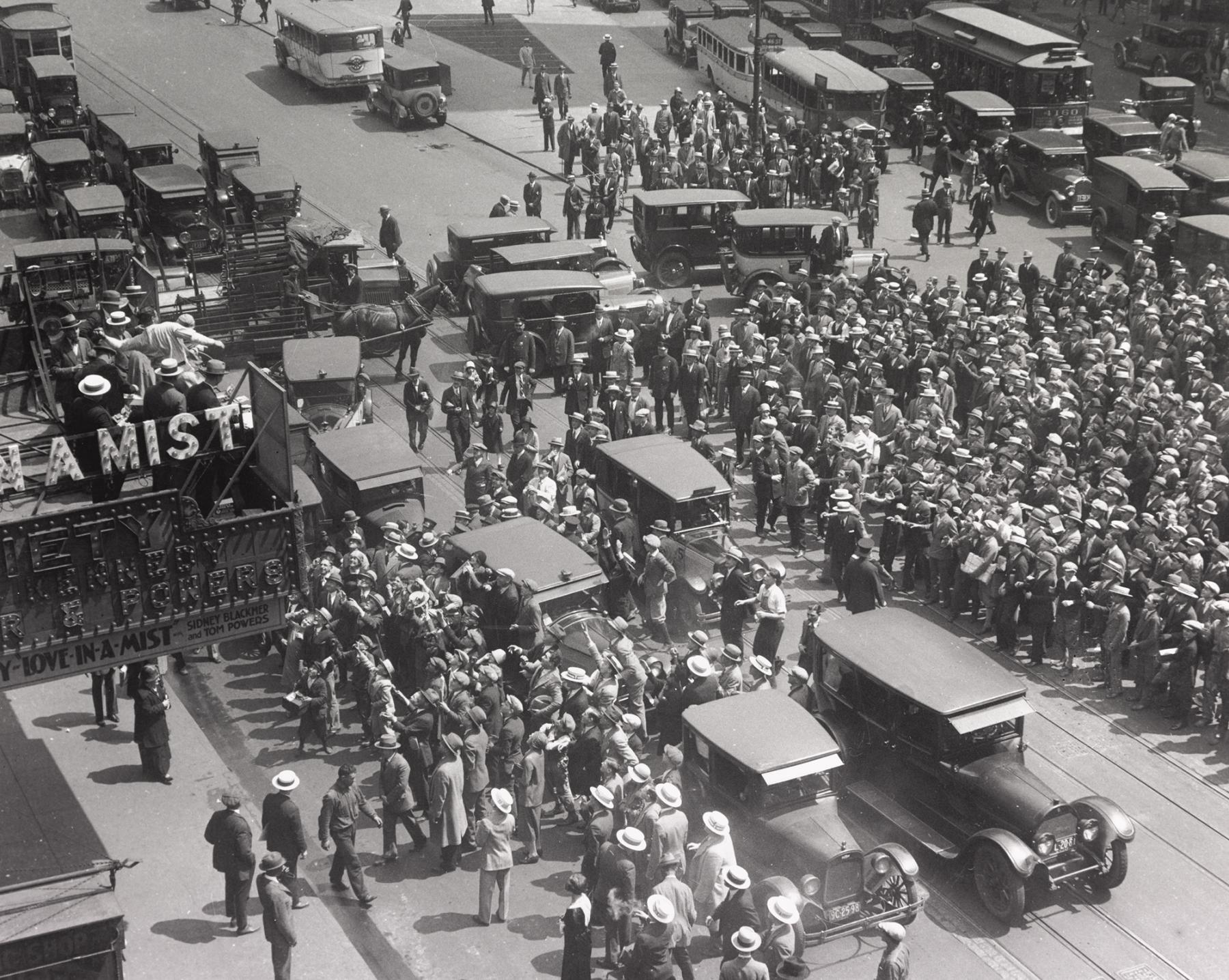 This image can be accessed in PASTIME. (National Baseball Hall of Fame and Museum)

On Saturday morning, May 22, 1926, a pair of celebrities and their entourage mounted the marquee of New York’s Gaiety Theatre and looked down upon the street below.

Broadway teemed with hundreds upon hundreds of men, women, and children, their arms outstretched, their necks craned upward, their attention fixed on the two famous individuals atop the theater awning: One a star of the stage, the other a star of the ball field.

The former was a 35-year-old actress named Madge Kennedy. Once touted by future J.G. Taylor Spink Award winner Heywood Broun as “the best farce actress in New York,” Kennedy was a veteran of the theater, but also dabbled in motion pictures.

While her stage career has long since faded from memory, today she can still be seen in small roles in movies such as “Lust for Life,” “The Day of the Locust,” “Marathon Man,” and most famously in “North by Northwest” in which she delivers the ominous line “Goodbye, Mr. Thornhill ... wherever you are.”

But back when the photographer captured this picture in the spring of 1926, Kennedy was the top-billed star of “Love-in-a-Mist,” a struggling comedy that had opened at the Gaiety six weeks earlier. 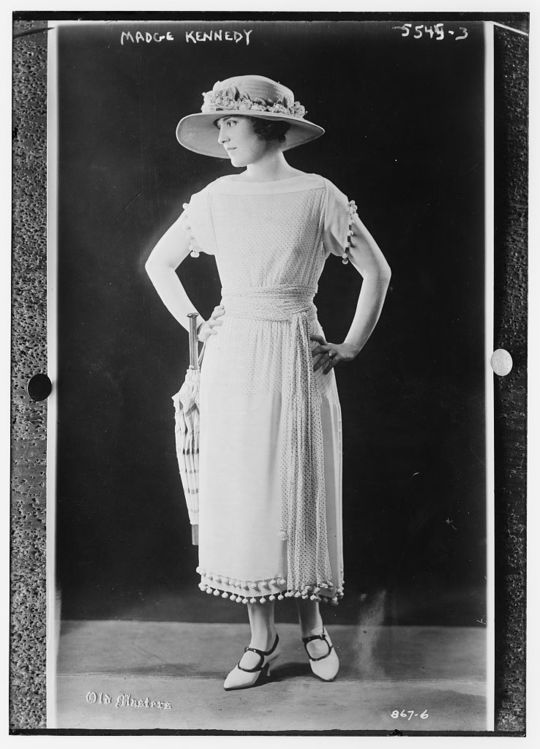 An image of Madge Kennedy, a veteran theater actress who dabbled in motion pictures. (George Grantham Bain Collection/Library of Congress).

Promoters looking for a way to boost the show’s popularity knew that Kennedy was a baseball fan who frequently attended games at Yankee Stadium. Enter Babe Ruth.

Four years Kennedy’s junior, Ruth was arguably the most famous American of the day. Though the previous season had easily been his most disappointing with the Yankees, 1926 saw a return to his dominant form.

Just two days before the photo was taken, the Bambino had collected his 15th home run of the season, putting him on pace to tally 72 homers. Though the Babe cooled down as the weather heated up (he finished the season with “just” 47 home runs), he still clobbered well over twice as many long balls as his nearest competitor, Hack Wilson (21).

On this morning, however, Ruth’s thoughts were not of hitting home runs, but of pitching them. 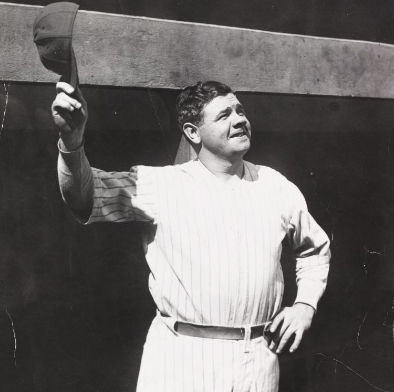 Hall of Famer Babe Ruth was one of the most famous Americans of his day. (National Baseball Hall of Fame and Museum)

A close examination of the photograph shows Ruth, dressed in his Yankees uniform and partially obscuring Ms. Kennedy, with his arm cocked back. In his left hand he holds not a baseball, but a small package of a new candy that bore his name: “Ruth’s Home Run.”

Alongside the pair of celebrities, attendants can be seen holding boxes containing the chocolate-covered treat, as well as dozens of autographed baseballs that were also tossed to the eager fans below.

Ruth’s foray into the candy business began earlier in the year. As the New York Sun reported on May 3, 1926, the Babe “insists that his chocolate-covered bar of something or other will be a bigger hit than any one he has ever made in his most strenuous moments with the bat.” 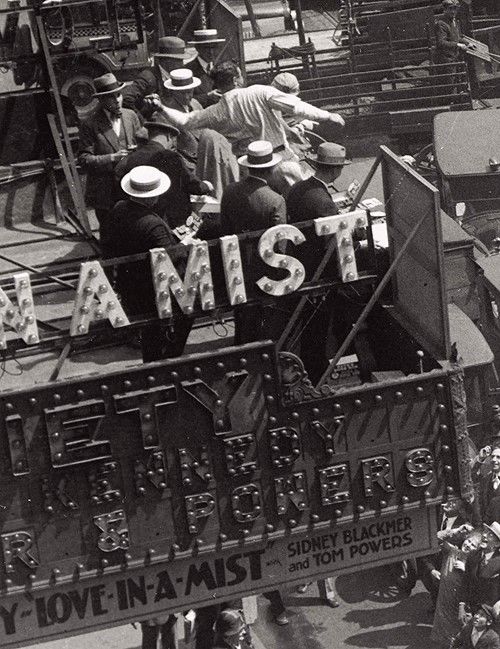 Babe Ruth throws one of his candy bars off Broadway’s Gaiety Theatre marquee in New York City, May 22, 1926. (National Baseball Hall of Fame and Museum)

Not only did Ruth’s candy bar ultimately fail, but “Love-in-a-Mist” closed less than six weeks later.

While the rooftop promotion did not succeed, such was not the case for Ruth and Kennedy. The achievements of the former are permanently etched in the annals of baseball history, his name still synonymous with greatness on the diamond. As for Madge Kennedy, the actress continued to act for another half a century, ultimately earning a distinction that even Ruth never achieved: A star on the Hollywood Walk of Fame. 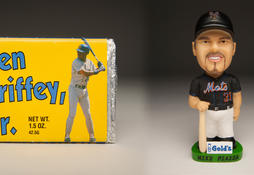