Joe Sinnott is best known for his prolific drawings of superheroes in the comic book world, but his passion for baseball drove Sinnott to draw the superheroes of the baseball world as well.

Sinnott began drawing when he received a box of crayons for his third birthday. In 1950, the 24-year-old artist began a 67-year collaboration with the future master of the Marvel Universe, Stan Lee. Years later, Lee spoke highly of Sinnott’s work, telling The New York Times that he was “one of the most talented, most capable, and most dependable artists in the business.” Sinnott inked the Avengers, the Fantastic Four and Thor, among many other comics for Marvel.

A lifelong baseball fan, Sinnott honored many baseball heroes through his work. An unexpected encounter with Babe Ruth at Game 2 of the 1941 World Series at Yankee Stadium, where Sinnott sat five rows behind Ruth, left him a fan of the Great Bambino for life. Sinnott also had ties to Hall of Famer John McGraw, who was a first cousin of Sinnott’s mother, Kitty.

According to his son Mark, Sinnott’s cartoon “Honor Black Babe Ruth…At Last” was one of the artist’s favorite drawings. The artist donated the original pen-and-ink cartoon to the National Baseball Hall of Fame and Museum in 1972, the same year Negro Leagues legend Josh Gibson was inducted into the Hall.

Published in the Kingston (NY) Daily Freeman on Feb. 8, 1972, immediately after Gibson’s election to the Hall of Fame, the drawing is both celebratory and bittersweet. A perfect, youthful Gibson looks confidently and calmly at the onlookers. He is dressed in a Homestead Grays uniform and wields a bat with his muscular arms. Over his shoulder, Ruth beams at Gibson with a twinkle of pride in his eyes and welcomes him into the Hall. The two are set against a dazzling backdrop of stars. 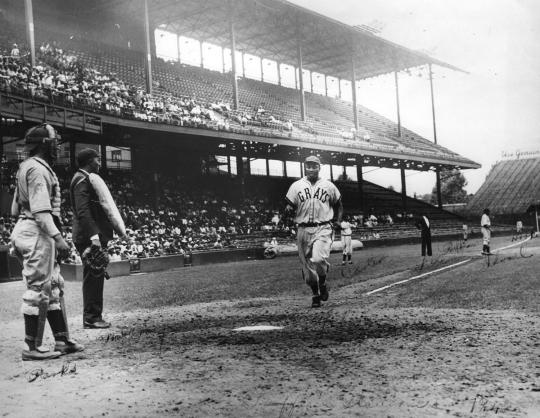 Hall of Famer Josh Gibson spent much of his career with the Pittsburgh Crawfords and the Homestead Grays of the Negro National League. (National Baseball Hall of Fame and Museum)

In the foreground of the image, a crowd gathers and gazes into the heavens holding picket signs that read: “We’re sorry Josh!,” “The Second Babe,” and “Hall of Fame at Last!”

The profound scene imagined and brought to life on the page by Sinnott sets Gibson among the stars and on the same plane as Ruth. Gibson was known by many as “the Black Babe Ruth” for his incredible hitting ability in the Negro Leagues. Despite the incomplete record-keeping of the Negro Leagues, Gibson’s reputation as one of the all-time greatest catchers and hitters endured. In 1972, Gibson was unanimously elected to the Hall of Fame by a special nine-man committee established to consider Negro Leaguers who had previously been excluded from the Hall of Fame.

Gibson’s posthumous induction recognized the accomplishments of the man who had been taken too soon. In 1947, Gibson suffered a stroke and passed away at the age of 35. 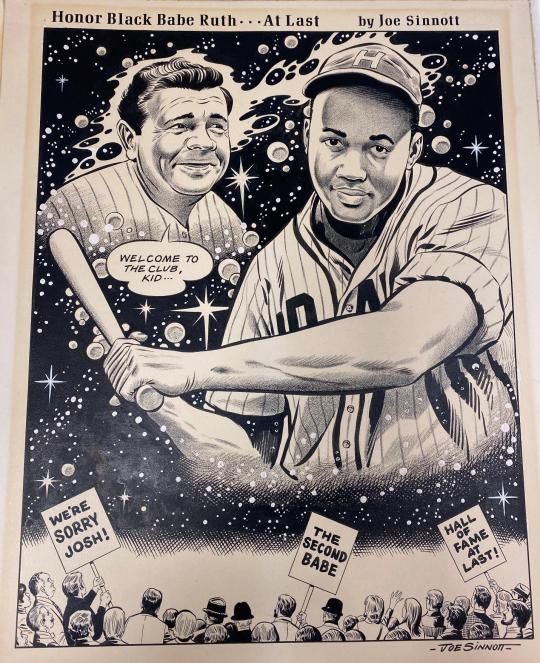 Joe Sinnott's cartoon, “Honor Black Babe Ruth…At Last”, was published in the Kingston (NY) Daily Freeman on Feb. 8, 1972, immediately after Josh Gibson was elected to the Hall of Fame. (National Baseball Hall of Fame and Museum)

Sinnott’s cartoon captures the emotional response to Gibson’s long overdue induction. And while the crowd below offers up apologies, the bold portrait at the center of the page focuses the onlooker’s attention on Gibson, the superhero who earned his enshrinement in Cooperstown. 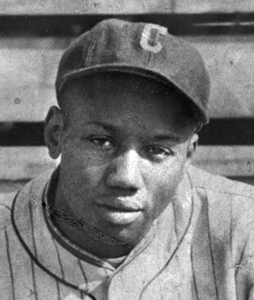 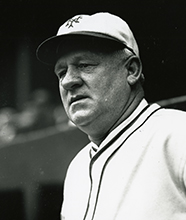 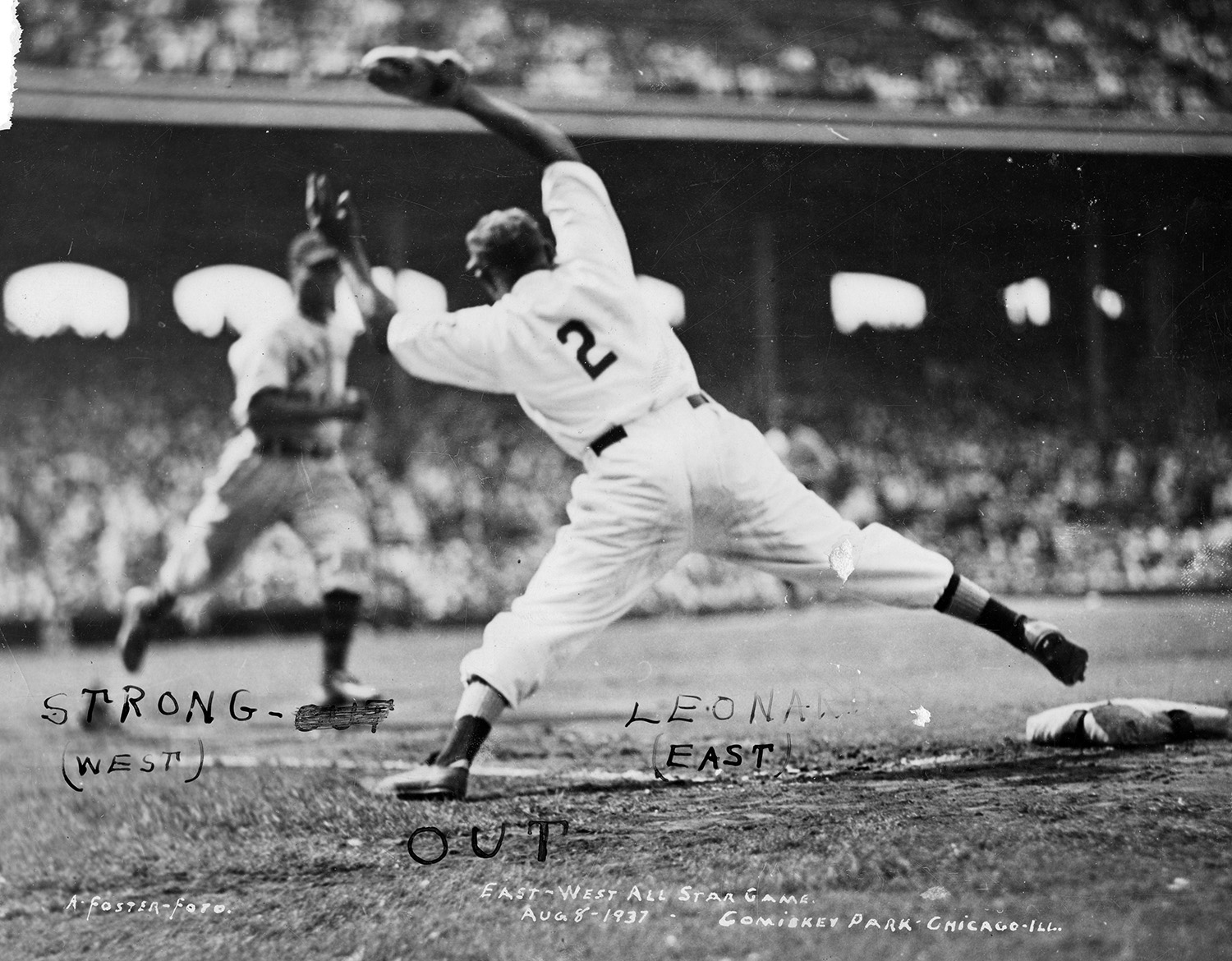 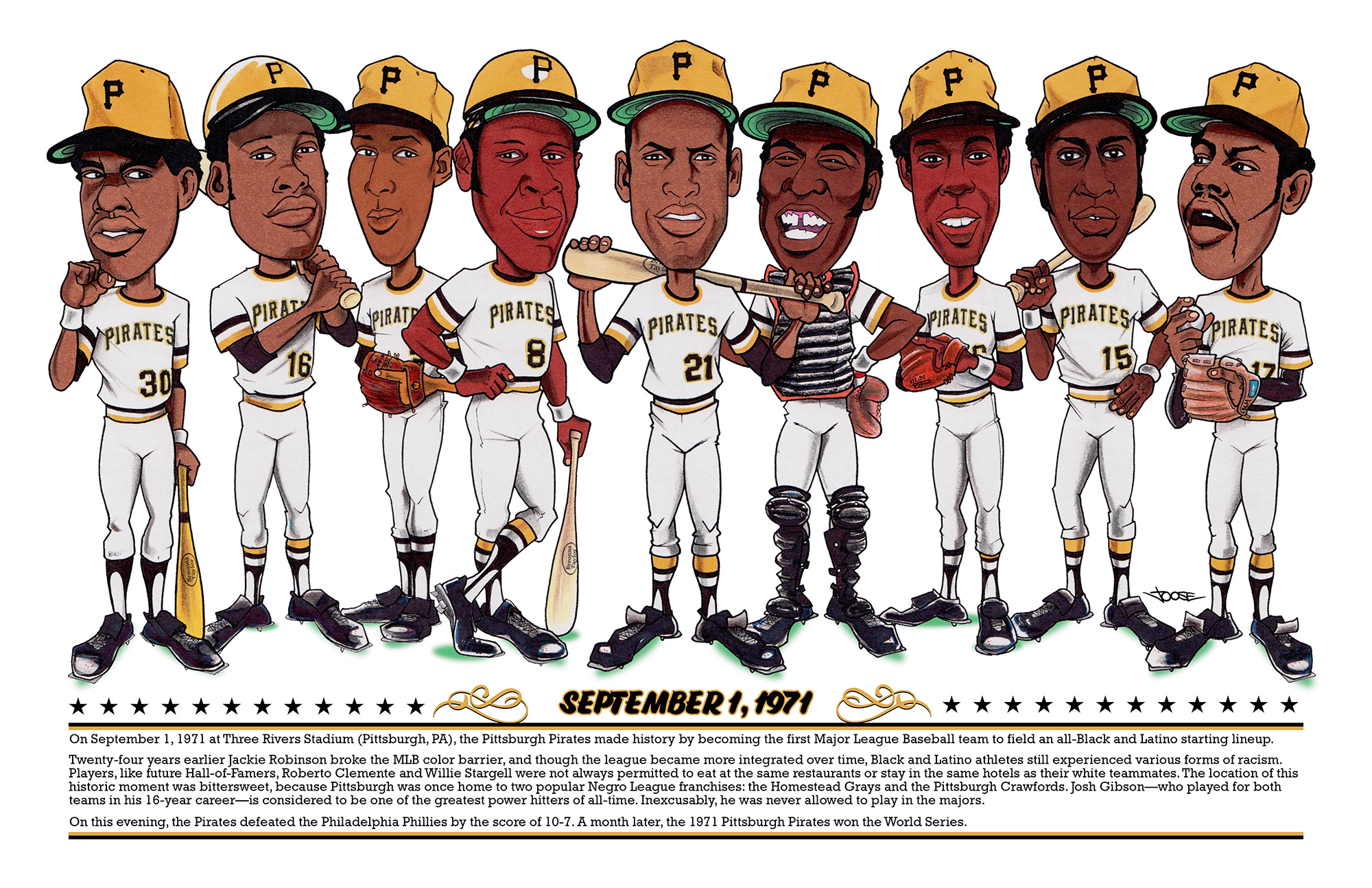 Jim Shearer's illustration depicts the Pirates lineup from Sept. 1, 1971, when Pittsburgh became the first AL or NL team to field an all-Black and Latino starting lineup. 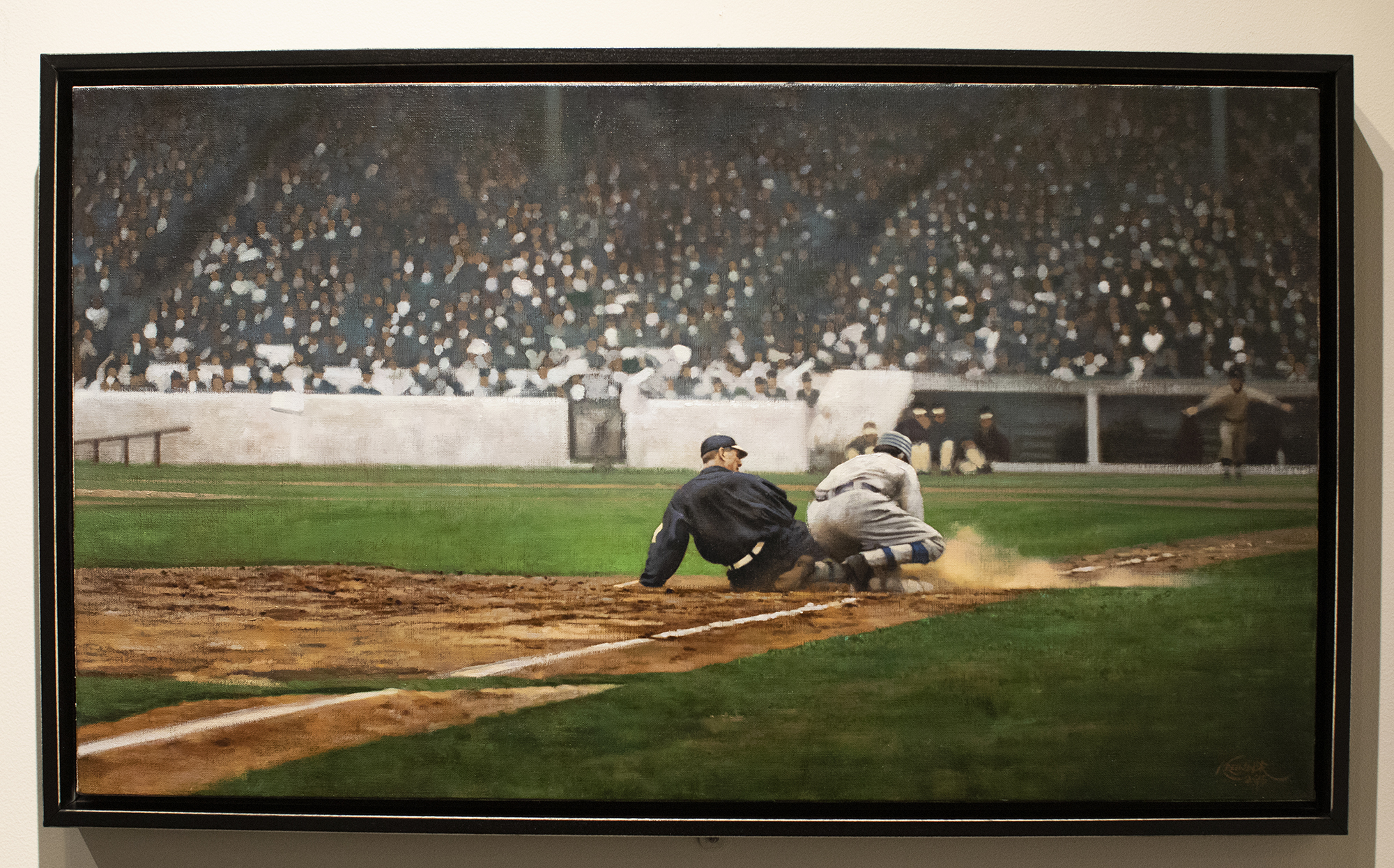 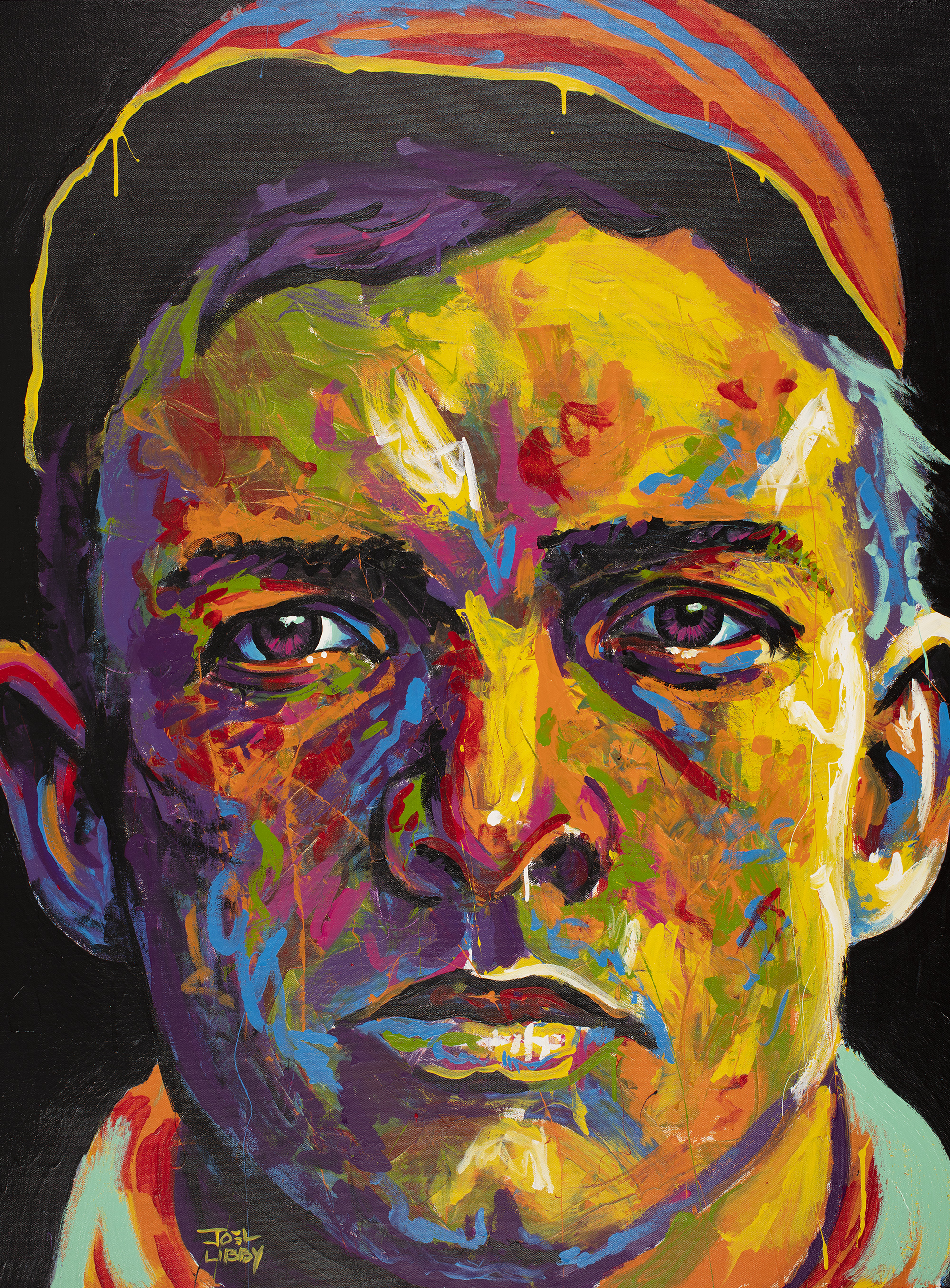