The Babe, a chicken and a record for both

Babe Ruth was many things to many people: A hero to children and a superstar to baseball fans. However, the one thing he was not was a chicken.

Or was he? As the United States celebrates National Fried Chicken Day on July 6, we take a look back at the intersection of The Bambino and his poultry counterpart.

Newspaper headlines such as “Babe Ruth Seeks Record for Eggs,” or “Babe Ruth Slow on 168th Laying,” might give the average reader pause. In 1927, though, there was more than one Babe Ruth in the news, and the feathered one was receiving just as much attention as the home run-hitting one.

By Sept. 24, the human Babe Ruth – a Baltimore-born slugger for the Yankees – was knocking one round tripper after another, chasing his record of 59 home runs, set in 1921. The avian Babe Ruth was a white leghorn hen known as “Lady Amco of Norfolk,” as she hailed from the Norfolk, Neb., chicken farm of A.R. Landers. But she might have been more Lou Gehrig than Babe Ruth.

On April 29, when Ruth stood at four home runs on the season, the hen began laying eggs – and continued to do so every day. On Sept. 24, Ruth had 56 home runs, and the Nebraska Babe Ruth had just laid an egg for the 149th straight day, tying the American record for consecutive egg laying held by Lady Lindy of Fayerbuilt, Ark. The Arkansas chicken, named after Charles Lindbergh, set the record earlier in 1927 but died after laying the 149th egg.

The spectacle caused quite a clamor. The United Press reported that “telephones at the American Milling Company were kept busy all day answering queries from interested persons,” and when the record-tying egg was laid, “a shout went up from those watching the little hen.”

Babe Ruth was a contestant in the National Egg Laying Contest sponsored by the American Egg Laying Association. The contest started on Nov. 1, 1926, and was to end on Oct. 25.

The Associated Press reported that despite “getting off to a late start, Babe has outdistanced all competitors and has not bothered about taking a day of rest as do most hens.” For that matter, Ruth the Yankee only missed four games en route to his single-season home run record. After a subpar 1925, Ruth returned with a vengeance in 1926, and he was outdoing that performance in 1927, where he would finish with 165 RBI and a .356 average to go along with the 60 home runs.

On Sept. 26, it was reported that the hen laid another egg – the 151st in as many days – and was deemed the holder of the national egg-laying championship. Newspapers across the country reported the news. But just as Gehrig did not take a day off once he surpassed Everett Scott’s consecutive games played streak in 1933, Babe Ruth the hen was not stopping at 151.

Egg no. 166 – which was deemed the world record egg after discovering an Australian hen laid 165 eggs in a row – was delivered to Washington, D.C., to be used in an omelet for President Calvin Coolidge, though it is believed it got mixed up in a basket with eggs “laid across the Potomac by less pure-bred fowl.”

The human Babe Ruth would be the recipient of egg no. 167, shipped by airmail to the Sultan of Swat.

The Lincoln (Neb.) Journal Star got the scoop from the hen herself when egg no. 168 was discovered.

“‘Cluck-cluck’ exulted Babe Ruth, world champion egg layer, as she deposited her 168th in as many days and began eyeing the nest for another attempt,” the newspaper wrote, as the human Ruth prepared for the World Series.

Not paltry for poultry. 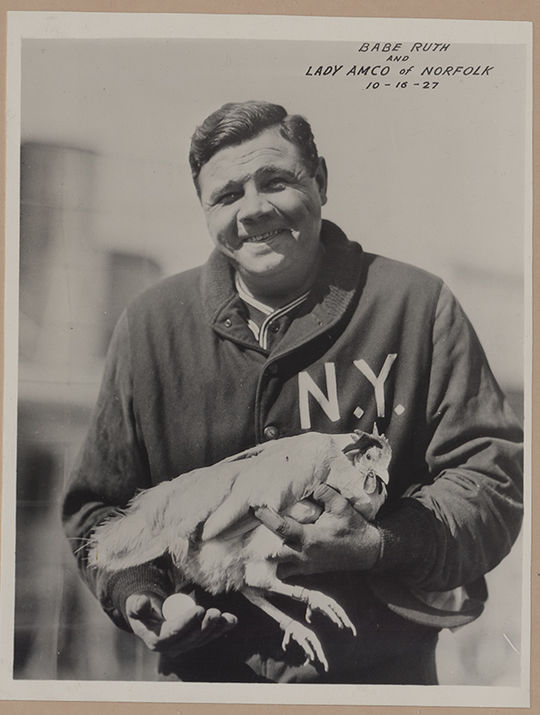 Babe Ruth, pictured at the Norfolk, Neb. chicken farm of A.R. Landers, with the white hen known as the “Lady Amco of Norfolk.” (National Baseball Hall of Fame and Museum) 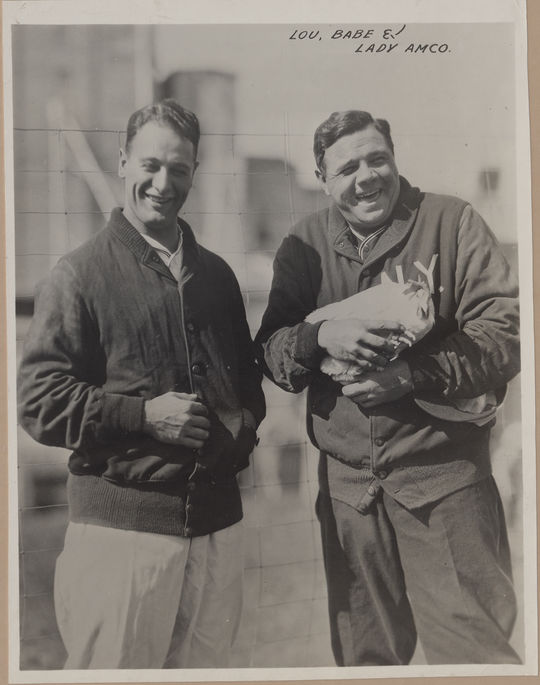 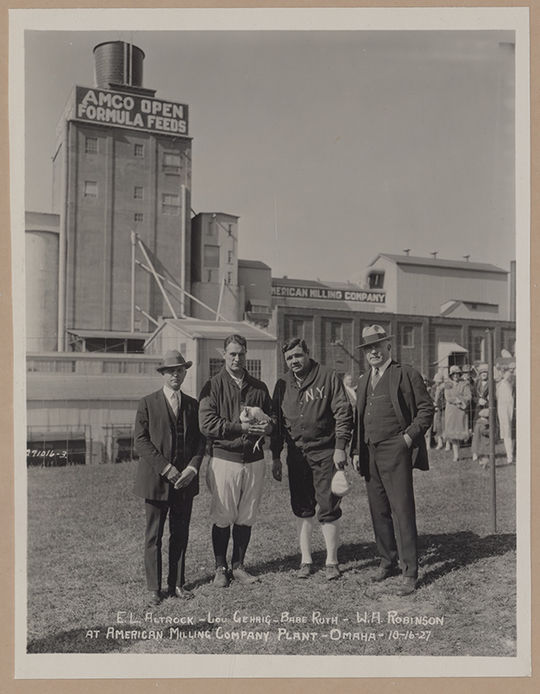 Much as the media followed the human Babe Ruth on an everyday basis, so, too, did it keep tabs on the feathered Babe. Stories about mating the chicken to a Colorado rooster appeared in newspapers, describing the Rocky Mountain rooster’s owner as having “serious objections to the setting up of a new chicken kingdom to be called ‘The House of Babe Ruth.’”

Of course, Yankee Stadium is the house Ruth built.

The United Press reported on Oct. 13, that the two Ruths would finally meet when the barnstorming ballplayer visited Omaha for an Oct. 16 doubleheader. Apparently, any eggs laid in the interim would be served to Ruth for breakfast that morning.

At the American Milling Company’s chicken yards, the two met before spectators and movie cameras. Ruth greeted the hen with a shake of her foot.

“‘Cluck, cluck, cluck,’ returned Lady Norfolk,” according to the United Press. “Which translated into ‘Chickenese’ by A.R. Landers, her owner, meant ‘The honor is all mine, big fellow.’” 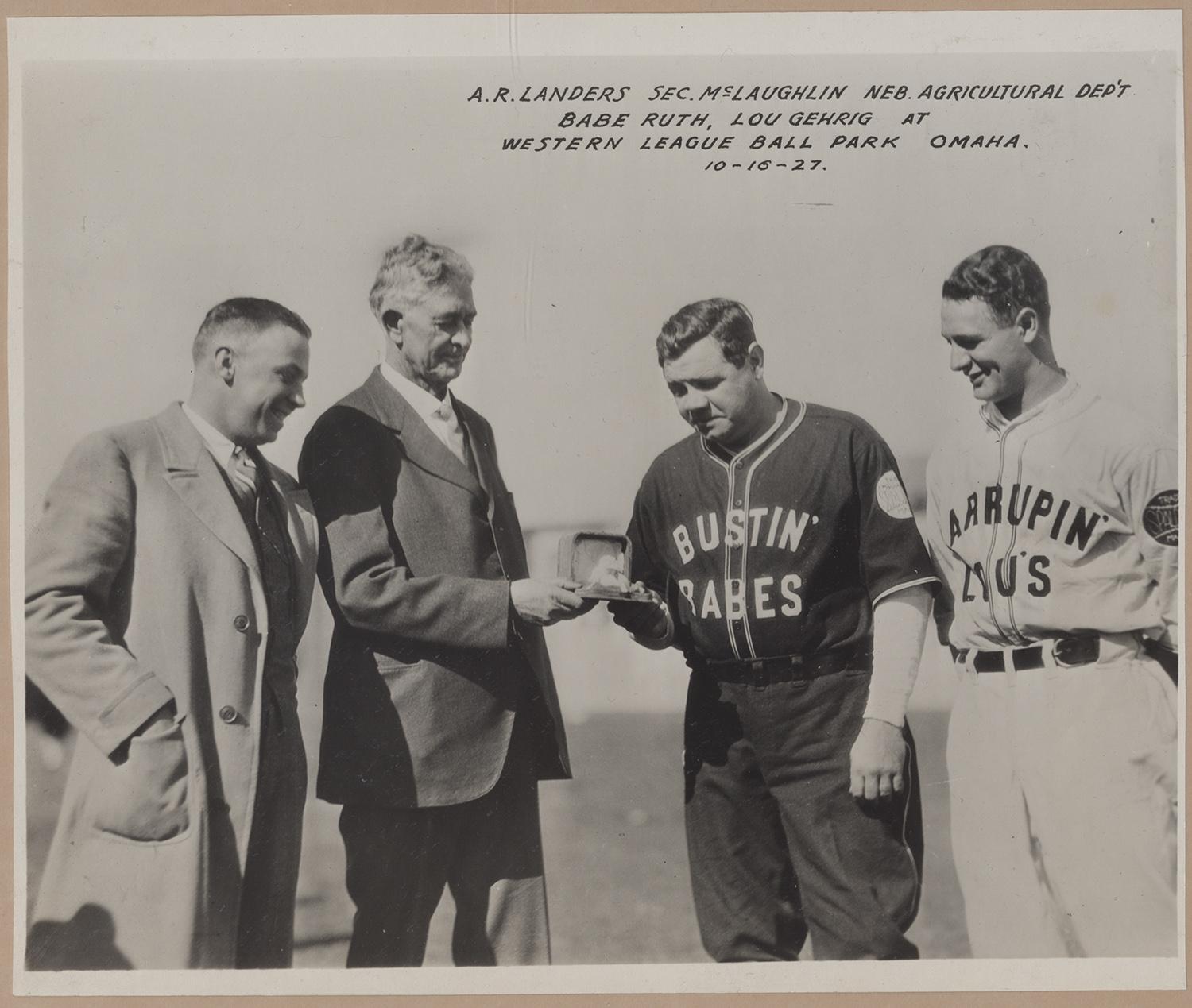 Babe Ruth (middle right) receives the 170th egg, enclosed in a jewel box and presented by H.J. McLaughlin, Nebraska’s secretary of the department of agriculture (middle left). Pictured to the left of McLaughlin is A.R. Landers, the owner of the chicken farm where the "Lady Amco of Norfolk" resided. To the right of Ruth is his Yankees teammate Lou Gehrig. (National Baseball Hall of Fame and Museum)

Ruth marveled at the chicken’s feat.

“One a day for 171 days!” noted Ruth, drawing agreement from Gehrig. “Gosh, how I wish I could do as well.”

Upon his first at-bat, Ruth received the 170th egg, enclosed in a jewel box and presented by H.J. McLaughlin, Nebraska’s secretary of the department of agriculture. The box was inscribed “From the Queen of Eggs to the King of Hitters.”

All good streaks must come to an end, however, and so it was for Babe Ruth the hen on Oct. 19. After 173 consecutive days of laying eggs, she turned up nothing. Some suspected “fowl” play, but George A. Danforth, who ran the contest for the American Egg Laying Association, explained why.

“Babe Ruth’s food was changed,” he said. “Her proteins were taken away from her, and she was fed carbohydrates instead.

“She could have continued until she laid 300 or more eggs if we had continued to feed her proteins, but in doing so she might have killed herself. We did it for her own sake.”

Ruth the human continued to feast on opposing pitchers, though, hitting home runs at a prodigious pace. He finished with 714 (and an additional 15 in the postseason) when he retired in 1935.

Articles featuring this and other notable Ruth highlights are chronicled in the Babe Ruth Scrapbooks, kept by his agent, Christy Walsh.