Tom Seaver remembered as one of baseball’s greatest pitchers

George Thomas Seaver possessed them all, and the resultant mix produced one of the game’s most complete hurlers. 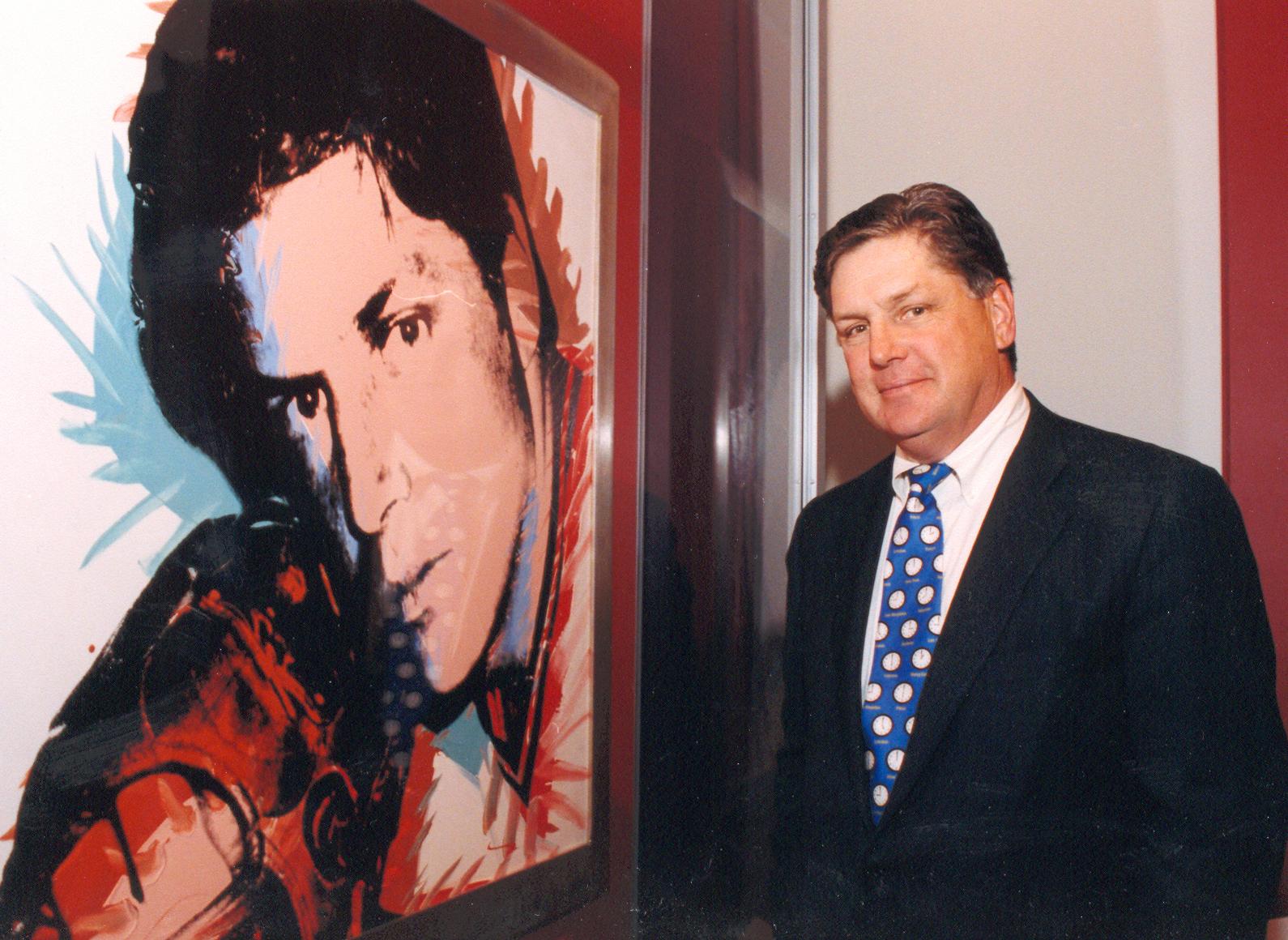 Tom Seaver stands next to a portrait of himself painted by Andy Warhol. En route to the Hall of Fame, Seaver became one of the most recognizable American icons of the 1970s. (National Baseball Hall of Fame and Museum)

Seaver was “the best I’ve caught over a period of time,” said Johnny Bench when he was Seaver’s teammate with the Cincinnati Reds. “I never knew a pitcher with such great knowledge of pitching. He had such a great mind, he could out-think the hitters.”

Born Nov 17, 1944 in Fresno, Calif., Seaver fell in love with baseball at an early age – and tried to sign up for Little League ball a year before he was eligible.

“I went home and cried (when they would not let him play at age eight),” Seaver said.

By the age of 12, Seaver had thrown a perfect game and was on his way to stardom.

After two years at Fresno City College following high school, legendary Southern Cal coach Rod Dedeaux recruited Seaver to join the Trojans. He went 10-2 in 1965, and was taken by the Dodgers in the 10th round of that summer’s draft. Seaver, however, opted to return to school.

The Braves then took Seaver in the first round of the January 1966 draft, but did not sign him until USC’s season was under way. This violated MLB rules, and Commissioner William “Spike” Eckert voided Seaver’s contract with the Braves and decreed that any team that matched Atlanta’s offer of $51,500 for Seaver would be placed into a lottery – with the winner earning the right to sign the young right-hander.

The Indians, Phillies and Mets entered the competition – and on April 3, 1966 the Mets won the rights to a player who would forever change their fortunes.

After just one season in the minors, Seaver debuted with the Mets on April 13, 1967. He won National League Rookie of the Year honors the fall after going 16-13 with a 2.76 ERA over 251 innings, instantly bringing credibility to a Mets team that had averaged 109 losses per season in their first five years. 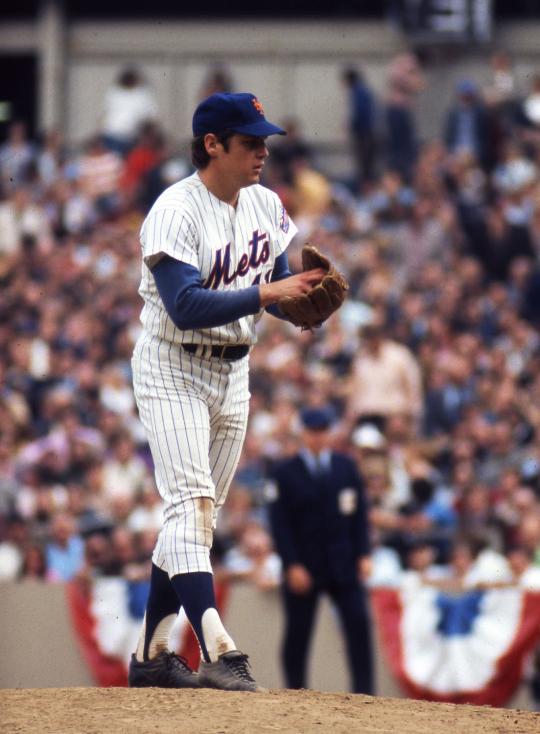 Two years later, Seaver and the Mets captivated the sports world by winning the World Series. Seaver won the 1969 NL Cy Young Award and finished second in the MVP race after going 25-7 with a 2.21 ERA. In the Postseason, Seaver won two more games – including the critical Game 4 matchup in the World Series against the Orioles. Seaver pitched all 10 innings in New York’s 2-1 victory, giving the Mets a commanding 3-games-to-1 lead. They would clinch their improbable title the next day.

Seaver quickly settled into his role as one of the game’s marquee performers. His classic drop-and-drive delivery made him the role model for countless young pitchers, and his consistency from year-to-year was matched only by his incredible focus on his craft.

And the historic moments kept on coming.

It started on July 9, 1969, when Seaver retired the first 25 Cubs he faced before allowing a base hit to Jimmy Qualls. He retired the next two hitters in what became known as his “Imperfect Game.” 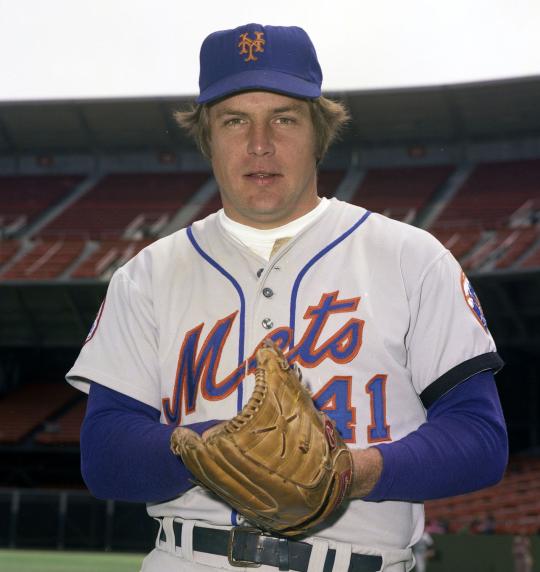 Seaver captured the third-and-final ERA title of his career in 1973, leading the Mets to the National League pennant before they fell to the Oakland A’s in a thrilling seven-game World Series. He won his second Cy Young Award that year, then captured his third Cy Young in 1975.

But as the core of the Mets team aged, change was in the wind. On June 15, 1977, the Mets shocked the world by trading Tom Terrific to the Reds for four prospects. The deal became known as the Midnight Massacre.

“It was time to move on,” Seaver said. “I got to go and play with Johnny Bench, Pete Rose, Joe Morgan and Dave Concepcion.”

“It is something to watch him pitch,” said the Reds’ Joe Morgan following the trade that sent Seaver to the Cincinnati. “I always marveled at him when I was on the other team. But now, seeing him all the time, I say to myself: ‘How did you ever get a hit off him?’” 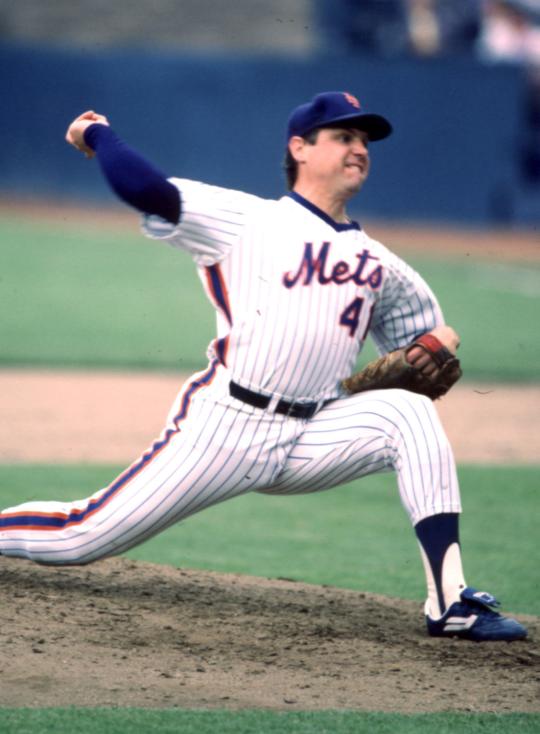 Tom Seaver’s classic drop-and-drive motion helped him strike out 3,640 big league batters, the third-best total all-time at the time of his retirement. (Rich Pilling/National Baseball Hall of Fame and Museum)

In the strike-shortened 1981 season, Seaver went 14-2 and led the Reds to the best record in all of baseball. But because they did not finish first in the NL West in either the first half or second half (the season was split into two following the strike), they did not qualify for the Postseason.

Traded to the Red Sox midway through the 1986 season, Seaver helped Boston win the American League East but was left off Boston’s Postseason roster. After finding no clubs interested in his services at the start of the 1987 season, Seaver was called by the Mets in June when injuries decimated their pitching staff. But after a couple of bus rides with the team and some work throwing batting practice, Seaver called it a career and retired on June 22. 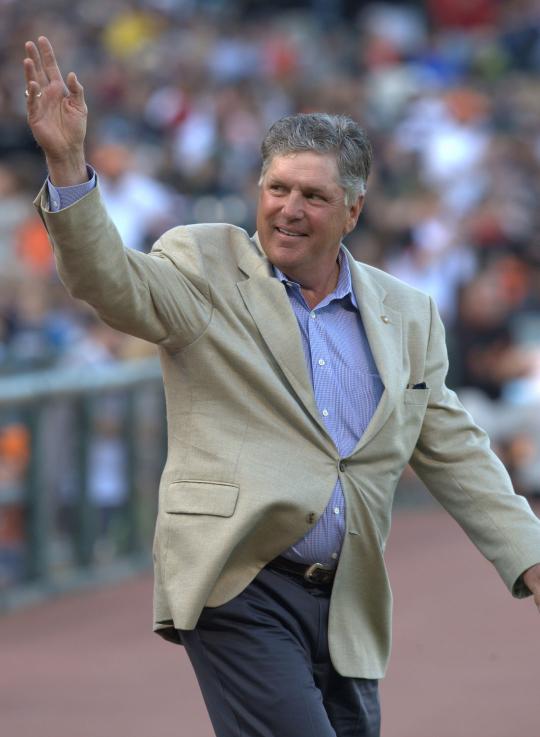 Seaver spent time in the broadcast booth during and after his career, serving as an articulate voice of the game for the Mets and Yankees as well as ABC and NBC. He later moved from the behind the mic to front of a shovel, developing award-winning wines from his vineyard in California.

Seaver was elected to the Hall of Fame in his first year eligible in 1992 with a then-record 98.84 percent of the vote. He later served for a decade on the Hall of Fame's Board of Directors.

“That’s a wonderful thing to think about.”