In the midst of a hectic day in Cooperstown, Vladimir Guerrero stood in the world-famous Plaque Gallery, surrounded by more than 300 bronze images of his fellow Hall of Famers, and pondered his good fortune.

“Growing up in my town of Don Gregorio in the Dominican Republic all I wanted to do was sign a professional baseball contract. Fortunately, and thanks to God, over 16 years I did enough to make it here,” said Guerrero in Spanish, a translator converting it into English. “To see so many plaques makes me so happy. I never thought I would be in the Hall of Fame, but now that I’m here I’m so glad it has happened.”

Guerrero, the sixth and final member of the Class of 2018 to visit the National Baseball Hall of Fame and Museum since election results were announced, was in Cooperstown along with his girlfriend Roxannie Rodriguez and brother Julio (an outfielder in the Red Sox minor league system from 1998-2001) for his Orientation Visit on April 26 in advance of his Induction Ceremony. His only prior trip to Cooperstown came in 2015, the year fellow countryman Pedro Martínez was inducted.

During an interview held in the Plaque Gallery, only minutes after continuing a recent tradition of autographing the spot where his own bronze plaque will reside come July, Guerrero was asked how his life has changed since the Jan. 24 phone call came that informed him of his election. 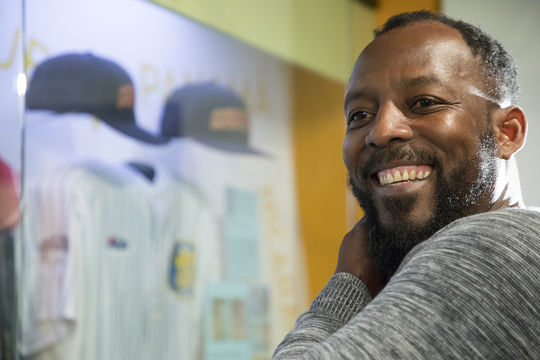 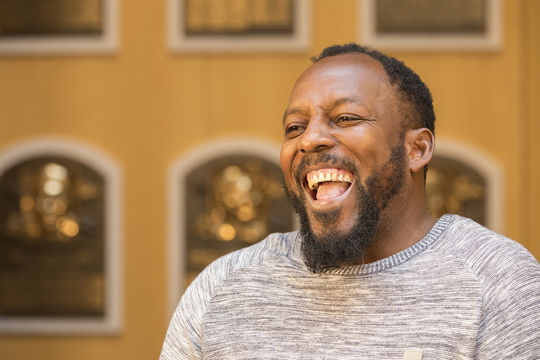 Vladimir Guerrero is the third Dominican player to earn a plaque in Cooperstown. (Milo Stewart Jr./National Baseball Hall of Fame and Museum)

“There were actually two calls – one call to say to expect a call and then 40 seconds later I got the call,” said Guerrero, wearing blue jeans and a gray sweater. “When I got it I felt very good. I was calm expecting the call and everybody else was nervous with anticipation.

“I’m the same. I’m still helping my folks back home,” he said with a smile. “I feel happy and my people feel happy. I’m the first one from my town, obviously, but I’m also the first Dominican hitter in the Hall of Fame.”

Of the 323 members of the Hall of Famer, only three were born in the Dominican Republic.

“There’s a lot of Dominican players and I feel happy to be the first Dominican hitter,” he said, “especially with Juan Marichal and Pedro Martinez both being pitchers.

“I got home early to the Dominican (the Sunday after he was elected), but I did not get to my town until 9:30 at night. The whole town was out there waiting to congratulate me and to have a party.”

The Hall of Fame Class of 2018 will also include fellow Baseball Writers' Association of America electees Trevor Hoffman, Chipper Jones and Jim Thome, as well as Modern Baseball Era Committee electees Jack Morris and Alan Trammell. The six will be inducted into the National Baseball Hall of Fame on Sunday, July 29, at the Clark Sports Center in Cooperstown.

“No, not much anticipation. Just waiting to see what happens in July when I enter the Hall of Fame,” said Guerrero, who turned 43 in February, when asked about the upcoming Induction Ceremony.

“Pedro Martinez called me, Juan Marichal talked to me. And then among the American players Andre Dawson called me, Tim Raines left me a message, those are the guys that played with me in Montreal.”

As for his induction speech, Guerrero said he hasn’t written it yet. “I’ve thought about it, I started it, but I’m not sure yet what I want to say in the speech.”

Guerrero, a supremely talented right fielder, left in his wake a 16-season legacy or power and production. Vlad the Impaler, who spent the first half of his career excelling with the Montreal Expos before moving on to the Angels, Rangers and Orioles, earned nine All-Star Game selections, eight Silver Slugger Awards and the 2004 AL MVP Award. 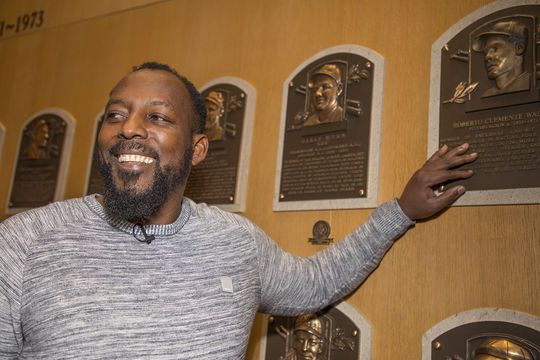 Vladimir Guerrero motions toward Roberto Clemente's plaque during his tour of the Hall of Fame. (Milo Stewart Jr./National Baseball Hall of Fame and Museum) 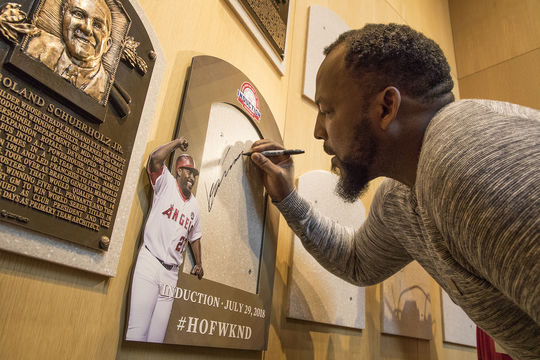 Vladimir Guerrero signs the backer where his plaque will be placed during his Orientation Visit to the Hall of Fame. (Milo Stewart Jr./National Baseball Hall of Fame and Museum) 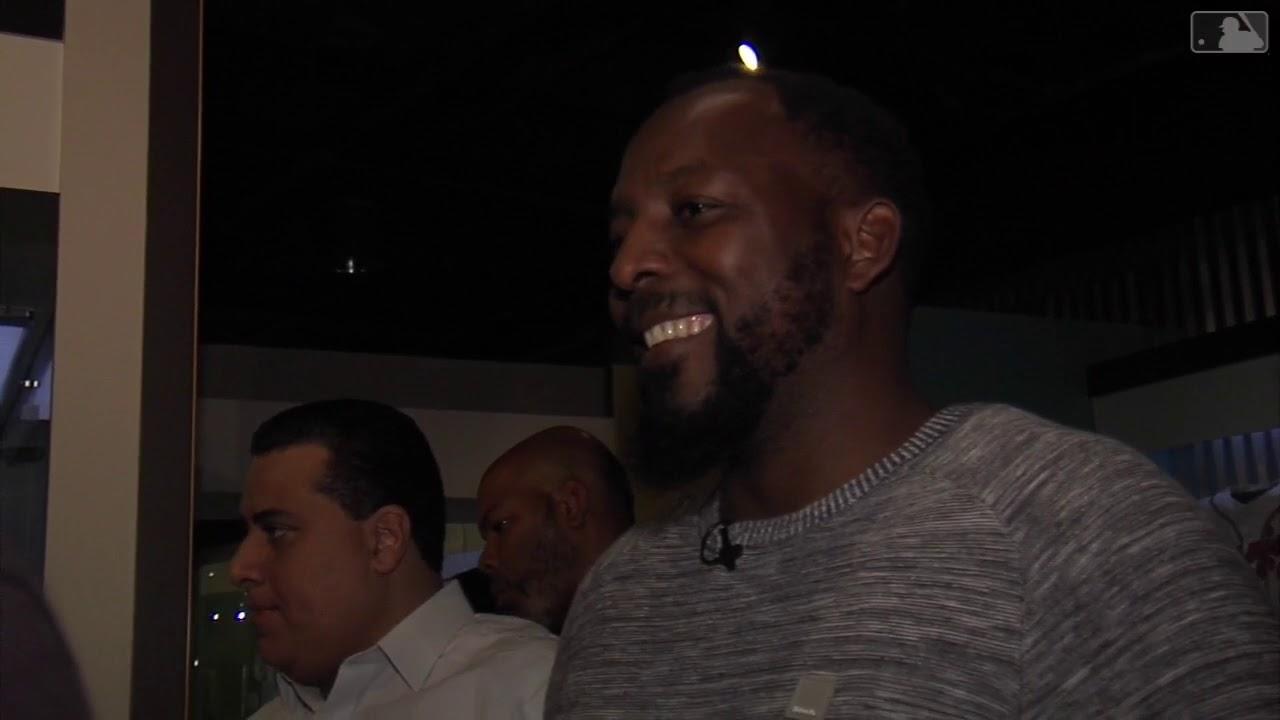 Guerrero was elected in his second year on the BBWAA ballot, having received votes on 92.9 percent of the ballots cast with 75 percent needed. Soon after his election was made public, it was announced that he be sporting an Angels cap on his plaque, the first player to represent that franchise in the Baseball Hall of Fame.

Guerrero began Thursday morning with a two-hour tour of the Hall from Museum Vice President of Exhibitions and Collections Erik Strohl. A trek through three floors of baseball history, Guerrero was introduced to the sport’s long past and some more recent history.

“When I came in 2015 I couldn’t come in,” said Guerrero when asked about the tour. “I liked the tour because I saw many things that I’d never seen or heard about before.”

Coming across a George Wright trophy bat from 1867, Guerrero joked it reminded him of a guava tree branch. Upon seeing a Ted Williams exhibit, he remarked he too liked fastballs high and outside, adding they “never pitched him down the middle.” 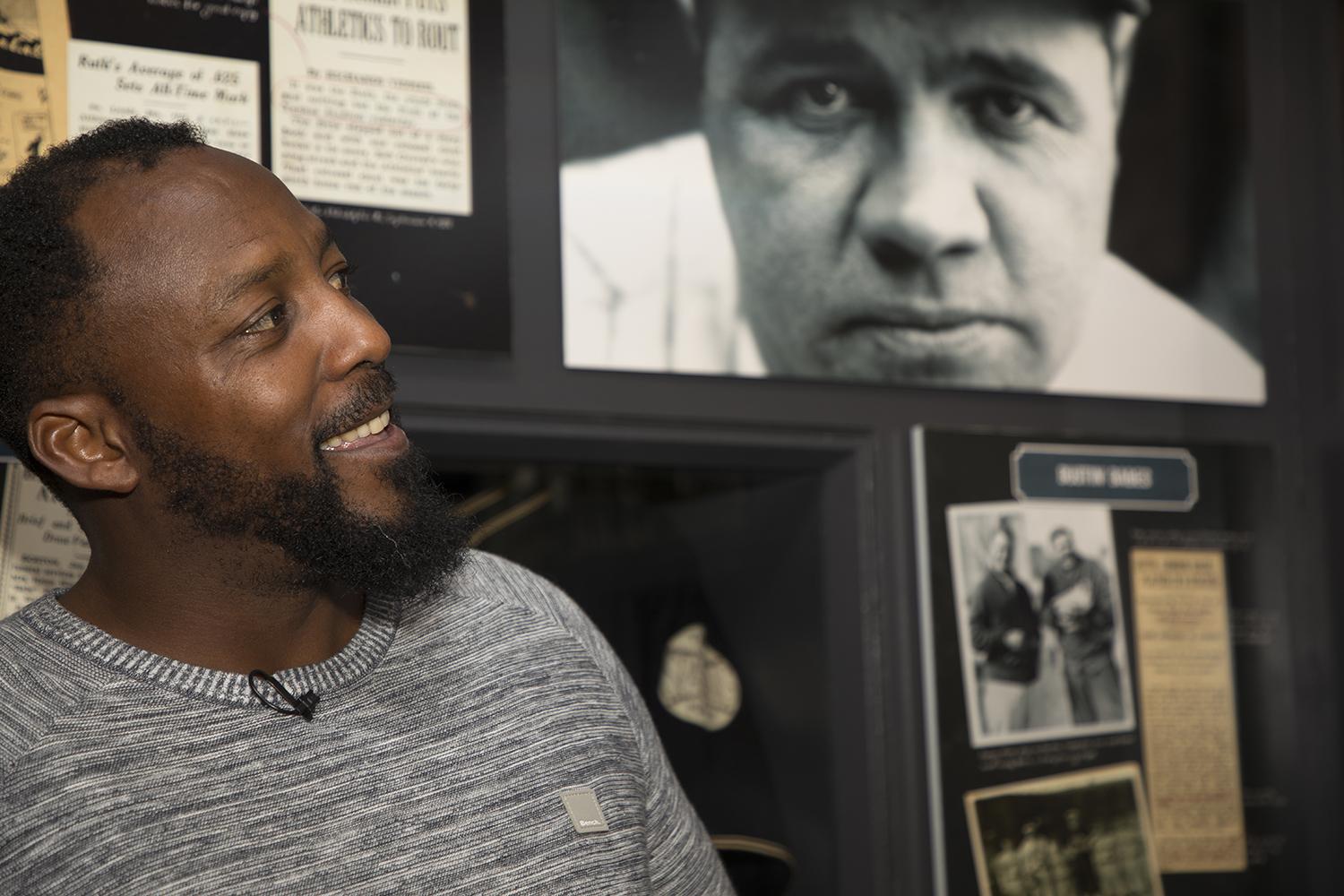 Vladimir Guerrero walks through the Babe Ruth: His Life and Legend exhibit at the Hall of Fame. (Milo Stewart Jr./National Baseball Hall of Fame and Museum)

Hearing that Hall of Famer Orlando Cepeda was a batboy on his father’s baseball team, Guerrero said, “A lot of batboys have been signed in the Dominican.” Asked about his youth, he told how use the core of a baseball and wrap it in socks to keep playing with it. And along the way he was able to see in the Museum’s Viva Baseball exhibit the bat he used for a 31-game hitting streak in 1999.

In the collections storage area in the Museum basement, Guerrero, wearing white cotton gloves, was allowed to swing a number of bats, including lumber belonging to Tony Gwynn, Pedro Guerrero, Willie Mays, Ted Williams and Babe Ruth, consistently holding them against an outstretched arm to sense their length and weight.

“It’s been awhile since I’ve held a bat in my hands,” a still fit Guerrero said with a wide smile.

And with Mother’s Day only a few weeks away, on Sunday, May 13, Guerrero was asked about the role his mother played in his life.

“My mom is everything,” Guerrero answered. “When I was five she went to Venezuela to work to help support us. And when I got to the big leagues she stayed with me every year, helped cook. So it was nice to have your mother with you in the big leagues. And she’s still in the states – she’s now with my son in Double-A.

“When we got the call (informing him of his election) she was there with me and she’s happy. We’re just waiting for July.” 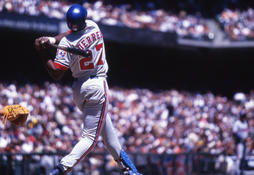 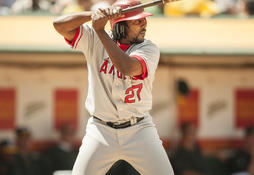 Vladimir Guerrero became the first Hall of Famer with an Angels logo on his bronze plaque. 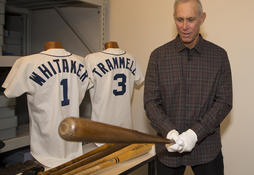