Randy Johnson was undoubtedly the tallest person to tour the National Baseball Hall of Fame this weekend.

The 6-foot-10 Johnson was an intimidating figure standing atop a pitching mound for more than two decades. But on Saturday it was all smiles as “The Big Unit” and son Tanner were in Cooperstown for a Hall of Fame Orientation Visit, an annual rite for all living inductees in preparation for their Induction Ceremony.

During Johnson’s 22-year career, spent mostly with the Mariners and Diamondbacks, the dominant southpaw, with his fastball and slider arsenal, won 303 games and five Cy Young Awards, including four in row from 1999 to 2002. A 10-time All-Star, Johnson led his league in strikeouts nine times, with a career total of 4,875 second all-time only to Nolan Ryan. In 2001, his 3-0 Fall Classic record helped an Arizona team, in only its fourth year of existence, to a World Series crown.

On Jan. 6, Johnson became the Hall of Fame’s tallest member as well as reaching the lofty heights of his longtime profession when the Baseball Writers’ Association of America announced the Hall of Fame elections of not only Johnson but also fellow pitchers Pedro Martinez and John Smoltz, as well as second baseman Craig Biggio.

“I saw everything from the beginning to what it is now currently and everything in between (during his tour on Saturday), and to be a small part of that in some small way is pretty cool,” said Johnson, dressed casually in blue jeans and a V-neck sweater, at a post-tour press conference in the National Baseball Hall of Fame’s Bullpen Theater. “I know about the history of the game but I don’t know it like this shrine. I can’t walk in here and know the names and places and dates. 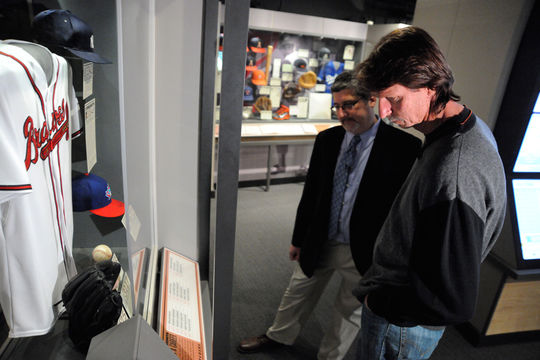 Hall of Famer Randy Johnson and Museum vice president of exhibitions and collections Erik Strohl stop for a look at the One for the Books exhibit during Johnson’s Orientation Tour on Saturday. (Milo Stewart, Jr. / National Baseball Hall of Fame)

A look at the past

Johnson, accompanied by his son Tanner, a University of Arizona freshman, went on a two-hour Saturday morning tour led by Hall of Fame vice president of exhibitions and collections Erik Strohl. The 51-year-old left-hander, looking as if he could make a comeback with a few weeks of Spring Training, was an inquisitive guest, often peppering his guide with questions on the sport’s long history as it related to a specific artifact in an exhibit case. 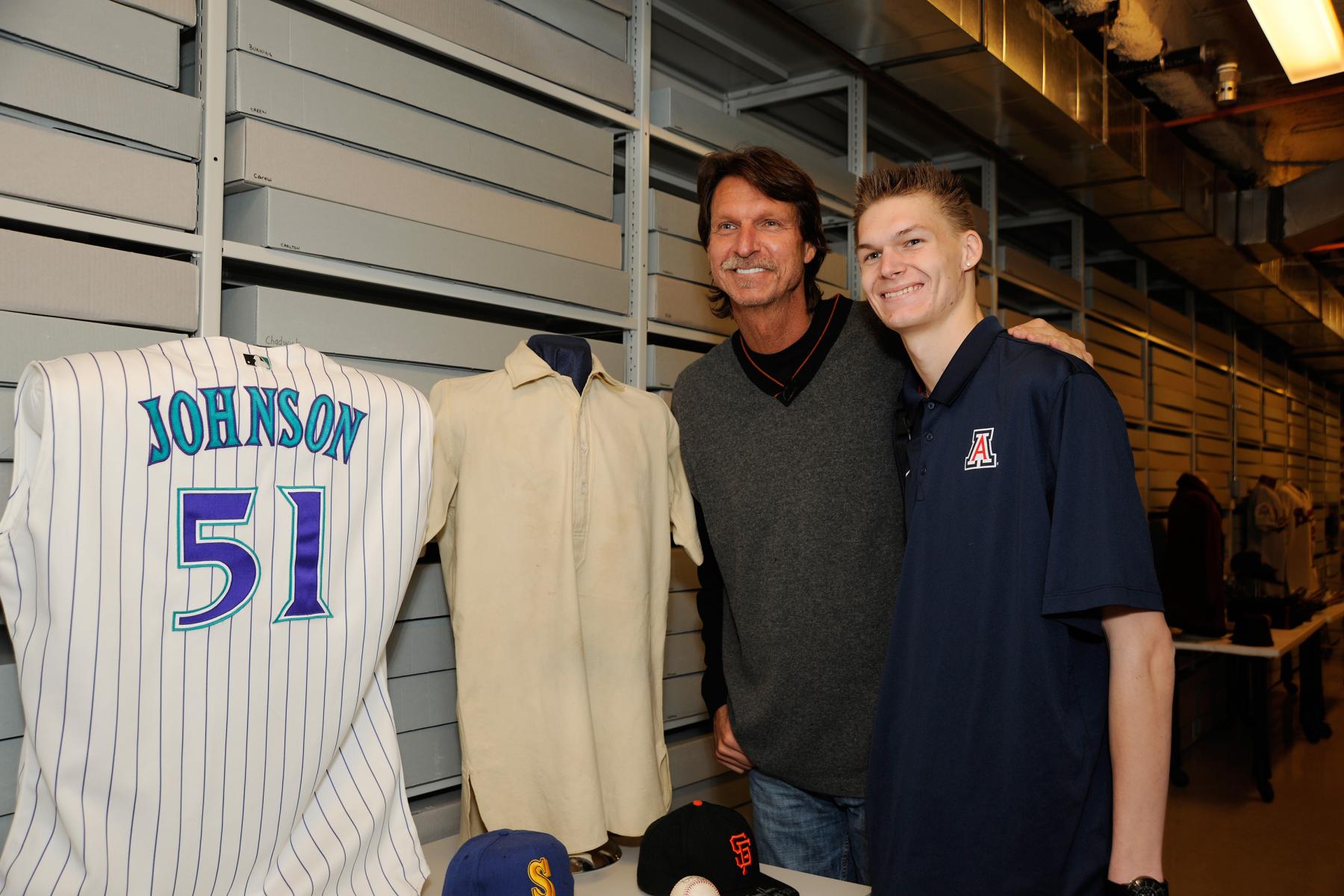 Randy Johnson and his son Tanner take a look at artifacts from his career in the Hall of Fame’s collection. (Milo Stewart, Jr. / National Baseball Hall of Fame)

“I feel like I know him somehow,” said Johnson in a front of an exhibit case featuring artifacts from Cy Young’s career. “After I won my first Cy Young Award, I became more inquisitive about his career. And he pitched for 22 seasons – something else we have in common.”

Johnson was able to check out a number of artifacts he had donated to the Museum over the years, including the glove he was wearing when he collected his 3,000th career strikeout and a cap he was wearing when the Diamondbacks captured the 2001 World Series.

In the Museum’s Collections area, where more of his artifacts were on display, including the cap from his 1990 no-hitter, a ball from his 19-strikeout game, and a pair of shoes from the season (1995) in which he captured his first Cy Young Award, he was shown a cabinet full of bats.

“I don’t care about them,” Johnson joked. “I just like breaking them.” 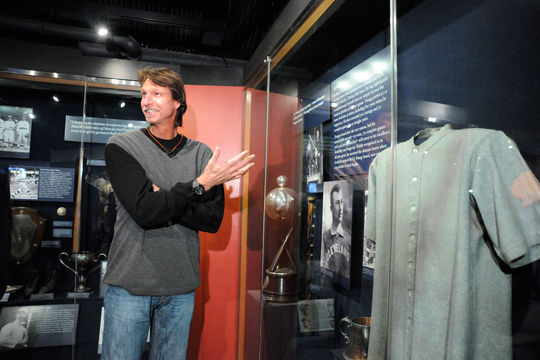 Five-time Cy Young Award winner Randy Johnson smiles while looking at an exhibit dedicated to Cy Young on Saturday during his Orientation Tour at the Hall of Fame. (Milo Stewart, Jr. / National Baseball Hall of Fame)

Johnson, who received 97.3 percent of the BBWAA vote in his first year on the ballot, the eighth-best in history, will be returning for the Induction Ceremony, featuring the four electees, to be held on Sunday, July 26, at the Clark Sports Center.

“You have to ask me that maybe after I’ve been inducted,” said Johnson when a reporter asked him how it felt to be inside the Cooperstown baseball shrine as a Hall of Famer. “It hasn’t quite sunk in yet. It really hasn’t. I can’t answer that. I’m honored and humbled. I didn’t play the game for the money or the prestige. I didn’t know I was going to be half as good as I turned out to be. I just enjoyed playing the game when I was seven years old and worked extremely hard and things kind of clicked as I got a little bit older.

“It took a lot longer for me because I was so tall. I surely never thought that this is where I would end up. So it’s very humbling to go in this year,” he added. “And I’m excited to go in with three other players, one I played with for a couple of months, Craig (Biggio), and two that I know exactly what they’re all about. They were in my era as well, with Smoltzie and Pedro.”

“My greatest conversation in baseball came with Warren Spahn,” Johnson told the media. “And just talking shop. And I’m thankful that I was far enough along in my career that I could ask him some knowledgeable baseball questions. Just things that I was wondering about. Him pitching in the era of travelling by train and small rotations and not modern medicine like anti-inflammatories. I was inquisitive.

“Just enlightening questions. Hearing what the game was like well before I played.”

Johnson also said his two years pitching for the Yankees gave him the opportunity to meet some of the game’s legends.

“I enjoyed playing in New York so much because I had the opportunity to have Yogi (Berra) come and sit down next to me whenever he came to the ballpark. And I wouldn’t say anything. I would just let him talk and tell his stories,” Johnson remembered. “Whitey Ford would come in and shake my hand and we would talk a little bit and I’d hear some of his stories.”

And when it was time for lunch and attend to some Hall of Fame business, Johnson left the reporters with his thoughts on his day spent at the National Pastime’s mecca and on his upcoming induction, now only about four months away.

“I’ve enjoyed my time here. It all hasn’t kicked in but I’m sure it will in July. And I’m happy to share this moment with my son who is old enough to enjoy these moments as he got to enjoy some of my accomplishments in baseball,” Johnson said. “I look forward to sharing this with my family when they come here.

“I’ll be vulnerable. I won’t be on a pitcher’s mound, I’ll be saying what is truly important to me, and that’s the people that made it all possible, that kept me there and got me there and looked out for me. Those are the people I will bring up. I won’t talk about what I did. Now it’s my opportunity to mention and thank the people publicly that are there about helping me and keeping me there.” 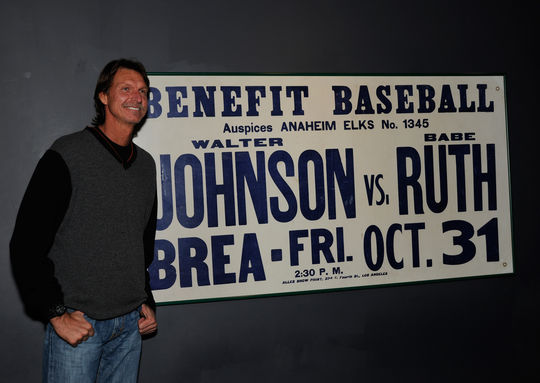 Randy Johnson poses for a photo next to a barnstorming poster during his Hall of Fame Orientation Tour on March 28. (Milo Stewart, Jr. / National Baseball Hall of Fame)