It is the most exclusive team in sports, and it now features two new members.

Ken Griffey Jr. and Mike Piazza were elected to the National Baseball Hall of Fame on Wednesday, Jan. 6, becoming members 311 and 312 of the Cooperstown shrine.

Griffey and Piazza will be inducted on July 24 in Cooperstown as the Class of 2016 as part of the July 22-25 Hall of Fame Weekend. The Weekend festivities will also feature the presentation of the J.G. Taylor Spink Award for writers to Dan Shaughnessy and the posthumous presentation of the Ford C. Frick Award for broadcasting excellence to Graham McNamee.

Griffey, in his first year on the Baseball Writers’ Association of America ballot, was named on 437 of 440 ballots by voting members of the BBWAA, setting a new record with a percentage of 99.32. The previous mark of 98.84 percent was set by Tom Seaver in 1992.

Piazza, in his fourth year on the BBWAA ballot, was named on 365 ballots – or 83.0 percent of all ballots cast. 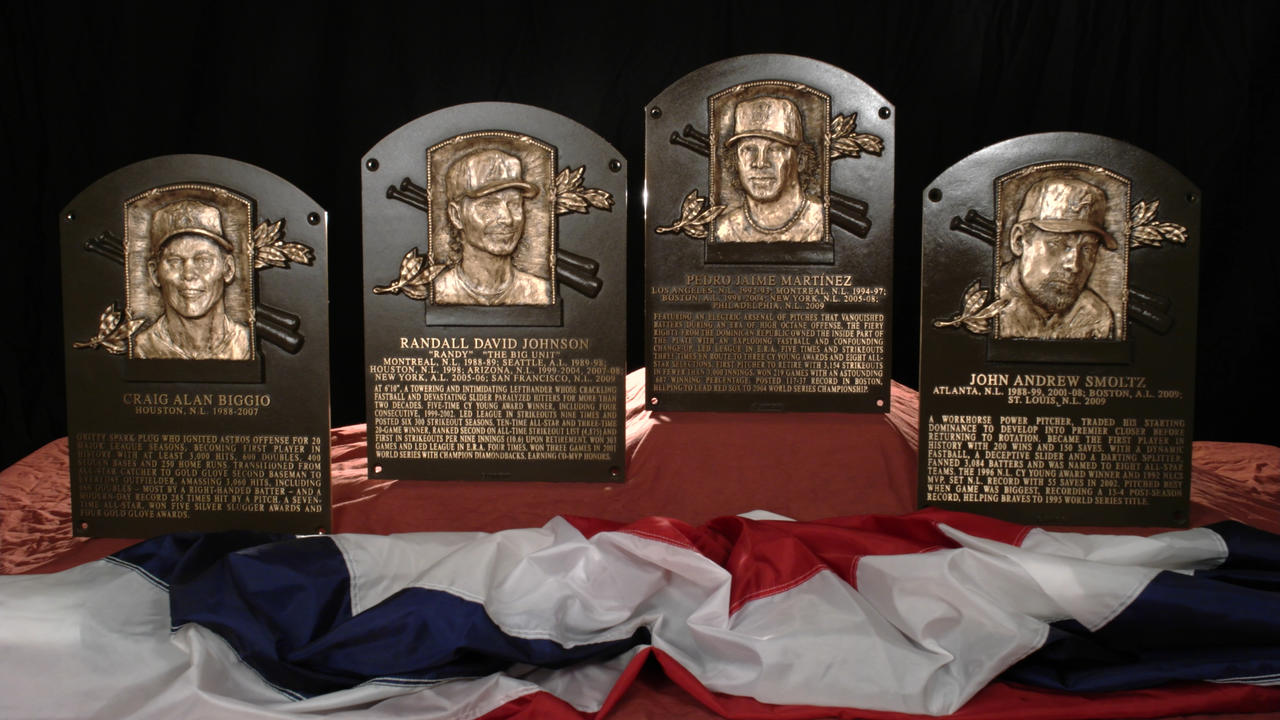 Creating the Hall of Fame Plaques 08:03

Each January, the sporting world waits with anticipation for this -- the biggest news of the baseball year. When the results of the Baseball Writers’ Association of America Hall of Fame vote are revealed, the electees become royalty – to be celebrated throughout the year and beyond as the best of the best.

These elite few are honored on the oak walls of the Hall of Fame Plaque Gallery in Cooperstown, lined with the bronze plaques that tell the stories of the men and women who have shaped our National Pastime. Since 1983, Matthews International in Pittsburgh has been the exclusive provider of those plaques. From the initial clay sculpting to the final touch-ups, Matthews takes great pride in their role in the annual Induction Ceremonies. Many people are involved in the creation of the plaques. In the video below, a few of them tell the story of the process.

The permanence of the bronze plaques is a testament to each Hall of Fame member’s impact on the game. For generations, the Gallery has been and will continue to be the ultimate tribute to legendary baseball careers.

He entered the game with not just mere potential. From the day the Seattle Mariners made him the first pick in the 1987 MLB Draft, Ken Griffey Jr. was expected to be great.

Twenty-two seasons, 630 home runs and a sea of accolades later, the kid dubbed “The Natural” delivered everything his skills and makeup promised.

After being selected by the Mariners – a pick that Baseball America would later call the best selection in the history of the MLB Draft – Griffey plowed through some rough days in the minor leagues before making his big league debut on Opening Day 1989 against the defending American League champion Athletics.

In his first at-bat in the big leagues, Griffey doubled off A’s ace Dave Stewart. With his dad a member of the Reds at the tail end of his career, Junior and his father became the first father-son combo to play in the majors at the same time. 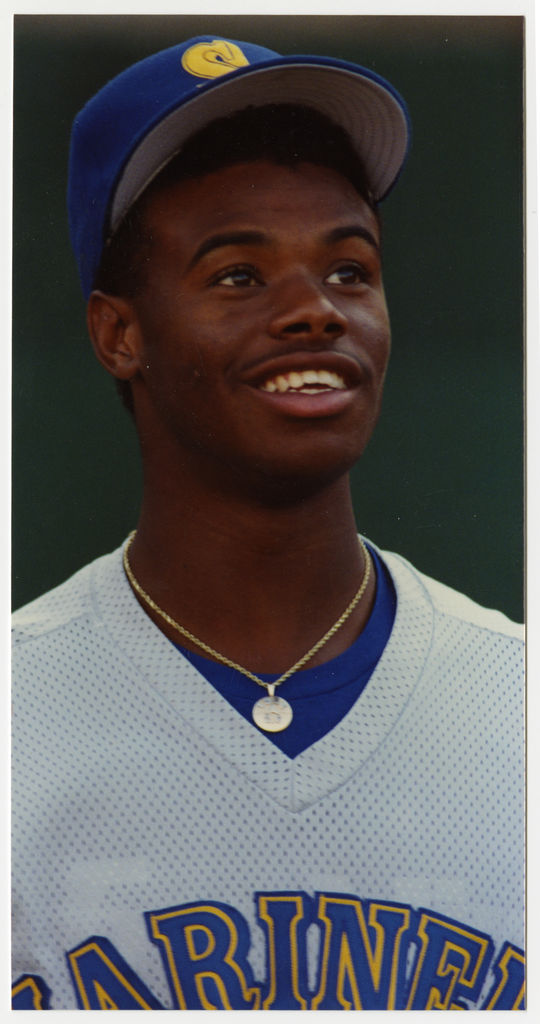 The next season the Griffeys teamed up in Seattle when Senior joined the Mariners late in the year. They homered in the same game on Sept. 14, 1990 against the Angels.

By that time, Junior was already being called the new face of baseball – having appeared on the cover of the May 7, 1990 issue of Sports Illustrated. By the end of the 1990 campaign, Griffey had been named to his first All-Star Game, won his first Gold Glove Award in center field and hit .300 with 22 homers and 80 RBI.

By 1993, the 23-year-old Griffey had filled out his lanky frame with muscle – all while keeping his picture-perfect lefty swing intact. The result was an assault on the record books with seven 40-plus home run reasons in eight years – interrupted only by a broken wrist (occurring while he made a circus catch at the Kingdome) that cost him half of the 1995 campaign.

In 1993, Griffey homered in eight straight games to tie the MLB record. Then in 1994, Griffey had 40 homers in early August when the strike ended the season, prompting speculation that he could make a run at Roger Maris’-then single-season record of 61. But before that run at the record, Griffey helped save baseball in Seattle, electrifying the Oct. 8, 1995, Kingdome crowd by scoring the game-winning run on a sprint from first base on Edgar Martinez’s double in the 11th inning of Game 5 of the Division Series against the Yankees. In that same series, Griffey became the just the second player (following Reggie Jackson in the 1977 World Series) to hit five home runs in a single postseason series. 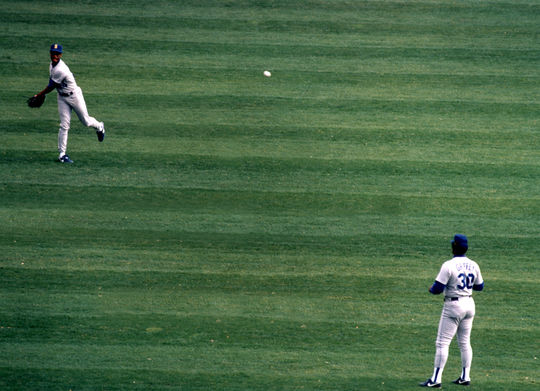 The improbable win galvanized Seattle behind the Mariners, leading to the construction of the team’s new facility at Safeco Field. 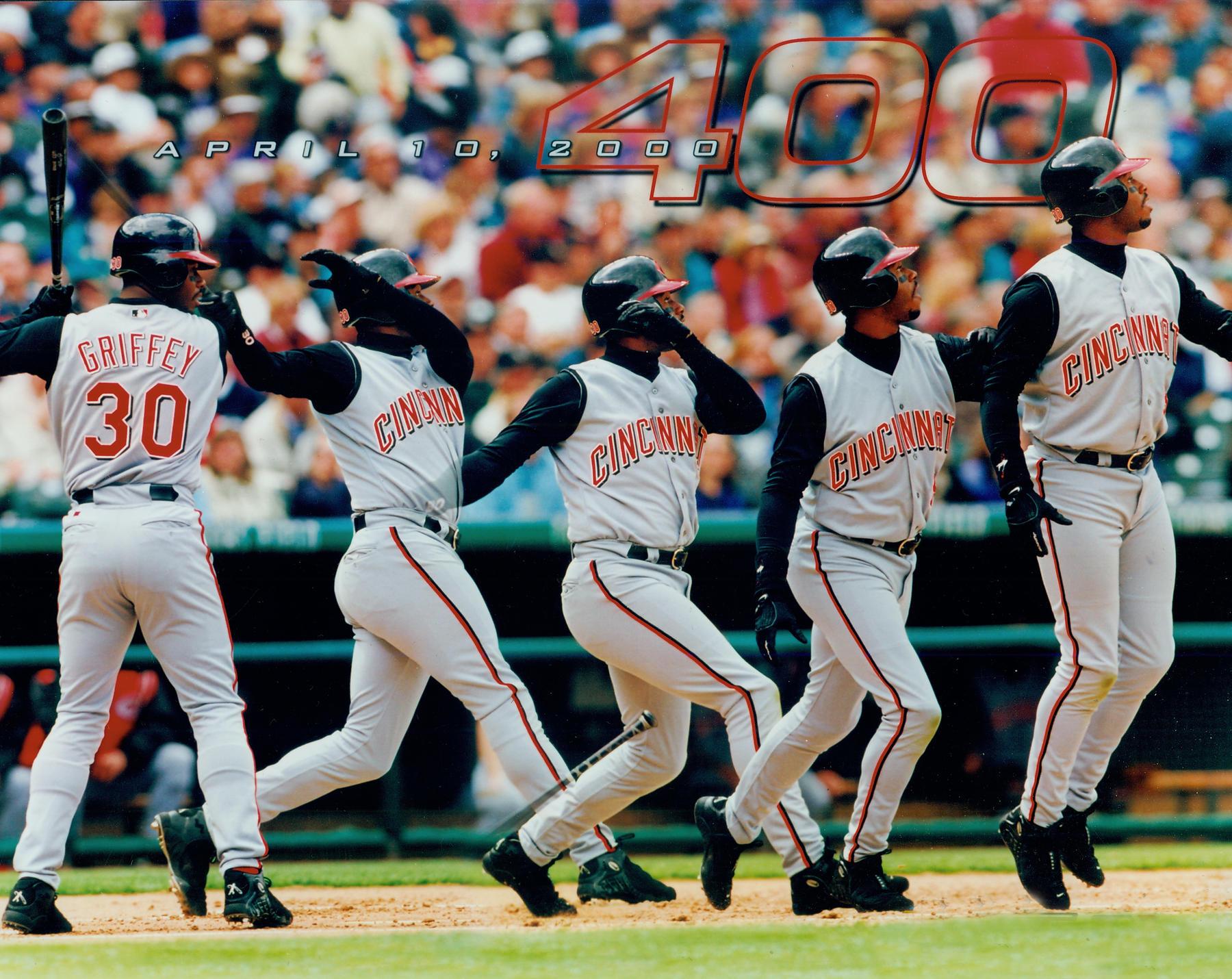 But with free agency looming, the Mariners traded Griffey to the Reds following the 1999 season – a year in which he was named to baseball’s All-Century Team – in a deal that netted the Mariners four prospects.

Griffey immediately signed a nine-year deal worth $116 million to remain in his hometown for what appeared to be the rest of his career. But after a typical Griffey season where he hit 40 home runs and drove in 118 runs in 2000, injuries took their toll on the seemingly indestructible center fielder.

From 2001-04, Griffey played in average of less than 80 games per year, batting hamstring tears, knee and ankle tendon ruptures and a dislocated shoulder.

Griffey was generally healthy in 2005 and hit 35 home runs, winning the National League Comeback Player of the Year Award. He reached the 30-home run mark again in 2007, earning his final All-Star Game selection. He finished out his career as a valuable bench player for the White Sox and Mariners before retiring early in the 2010 season. 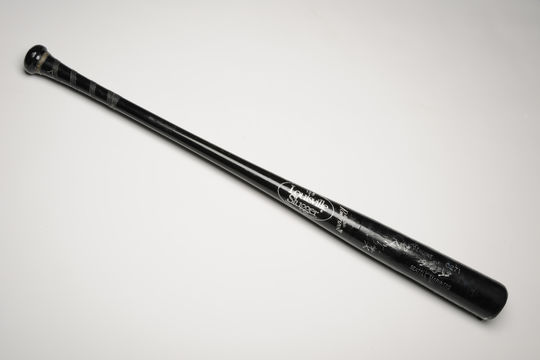 As a baseball underdog, it doesn’t get much more challenging than being a 62nd round draft choice. But in less than 30 years, Mike Piazza has gone from the 1,390th player chosen in the 1988 MLB Draft to a plaque in Cooperstown.

Along the way, Piazza firmly established himself as one of the greatest hitting catchers in the history of the game.

Born Sept. 4, 1968 in Norristown, Pa., Piazza had baseball connections from the start. His father, Vince, grew up in the same Norristown neighborhood as Hall of Fame manager Tommy Lasorda. After attending the University of Miami and Miami-Dade Community College, Piazza was taken in the 62nd round by the Dodgers – on the recommendation of Lasorda – in 1988. A first baseman in college, Piazza moved to catcher with the Dodgers.

After a couple tough years in the minors – including a season in which he briefly quit the game – Piazza established himself as a top prospect by hitting 52 home runs combined during the 1991 and 1992 seasons. He was called up to the Dodgers at the end of the 1992 season, then exploded on the national scene in 1993 with 35 home runs, 112 RBI and a .318 batting average en route to a unanimous selection as the National League’s Rookie of the Year. 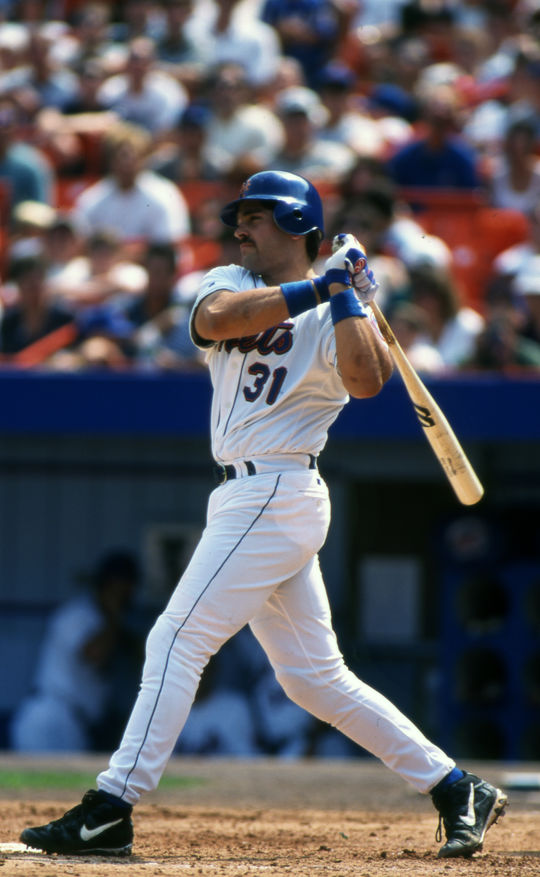 Defensively, Piazza proved to be one of the game’s most durable backstops – leading the league in putouts four times and assists twice. 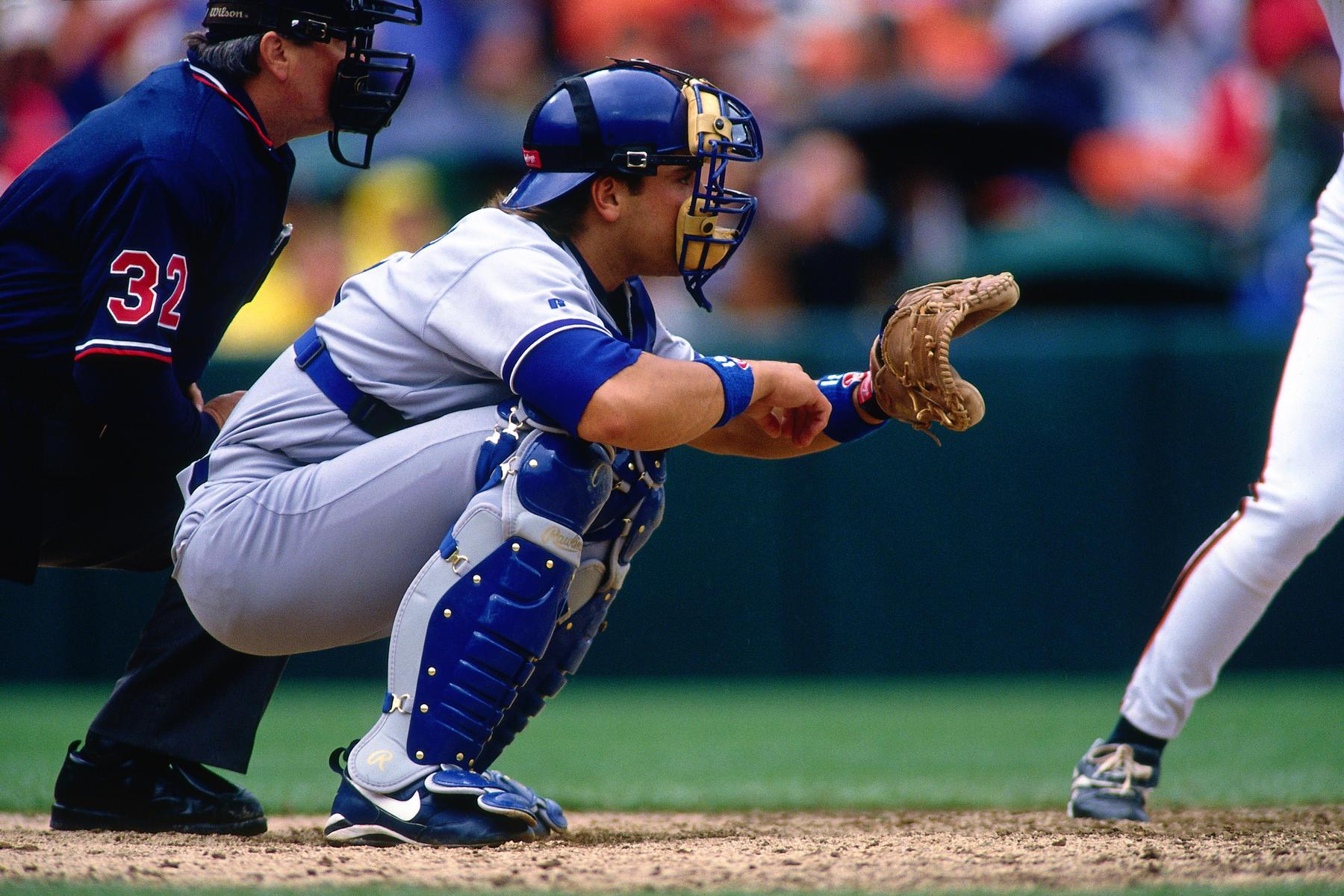 Mike Piazza of the Los Angeles Dodgers catching during a game against the San Francisco Giants in 1996. (Brad Mangin / National Baseball Hall of Fame Library)

But after failing to come to agreement with the Dodgers on a long-term contract, Piazza was traded to the Florida Marlins with Todd Zeile on May 14, 1998 for five players, including Bobby Bonilla, Jim Eisenreich, Charles Johnson and Gary Sheffield.

Eight days later, the Marlins – in the midst of a team restructuring following their 1997 World Series title – traded Piazza to the New York Mets for prospects Geoff Goetz, Preston Wilson and Ed Yarnall.

Piazza finished that fractured season with 32 homers, 111 RBI and a .328 batting average, then led the Mets to playoff berths in both 1999 and 2000 – advancing to the World Series in the latter season. The Mets lost the World Series despite Piazza’s two home runs and four RBI.

Piazza topped the 30-homer and 90-RBI marks in both 2001 and 2002 before the wear and tear of catching began to take its toll on his legs. He played three more seasons with the Mets and one apiece with the Padres and A’s, retiring following the 2007 season with 427 home runs – including a major league record 396 as a catcher. 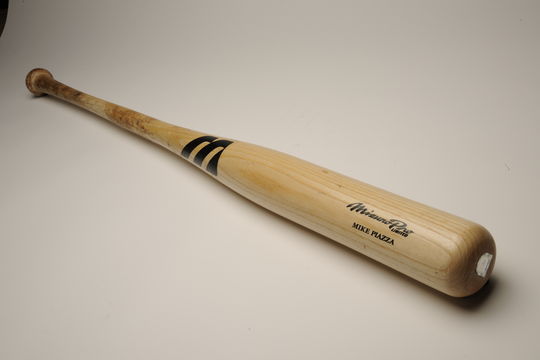 Piazza drove in 1,335 runs – fourth among catchers all-time behind Yogi Berra, Ted Simmons and Johnny Bench – and posted a .308 career batting average. He was named to 12 All-Star Games (winning the 1996 All-Star Game MVP), captured 10 Silver Slugger Awards at catcher and finished in the top five of the NL MVP voting four times, including back-to-back second-place finishes in 1996 and 1997.