John Smoltz was a major cog in a stellar pitching triumvirate, a three-headed force that led the Atlanta Braves to unprecedented success. Eventually, arm injuries led to his transition into a reliever, where he proved to be one of the game’s best.

Today, Smoltz, with his rare combination of mound accomplishments, stands on the precipice of baseball immortality as he becomes eligible for election to the Baseball Hall of Fame.
Smoltz debuts on the Baseball Writers’ Association of America Hall of Fame ballot this fall, one of 34 players on the 2015 BBWAA ballot for the Class of 2015. 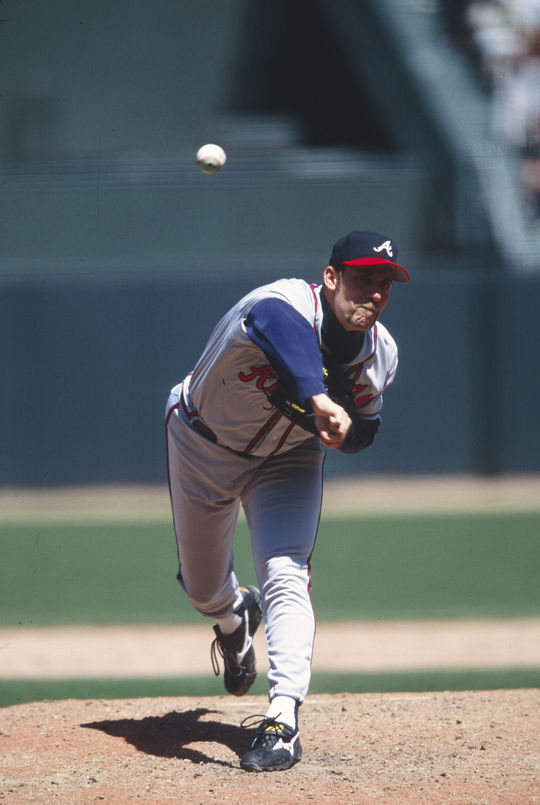 Dealt to the Braves when he was only a minor league prospect, Smoltz soon established himself as a workhorse right-handed hurler for a young team on the verge of turning the corner. Unfortunately, in the midst of this prolonged success, a troublesome elbow forced the starter to become a closer for a few years. Smoltz would emerge from this unchartered path to become the only player in big league history with at least 200 career wins and at least 150 saves.

“My legacy will be however someone wants to view it,” Smoltz said as his playing career was coming to an end. “Certainly I’m proud of it. I don’t even know if I have a word for it. I mean, I literally gave everything I had every single time I went out there.

“In life, certainly, not everything goes smoothly, but this has been the time of my life.”

Born May 15, 1967 in Detroit, Mich., John Andrew Smoltz grew up in a baseball family with both a grandfather and his father having spent time working at Tiger Stadium. Smoltz was such a big Tigers fans growing up that after Detroit won the 1984 World Series, he and his father dug up a piece of Tiger Stadium sod and planted it in the family’s backyard.

Starring in both baseball and basketball at Waverly High School in Lansing, Michigan, Smoltz’s initial plan was to attend Michigan State to play both sports. Instead, he signed with his hometown Tigers after being selected in the 22nd round of the 1985 amateur draft.

After almost two seasons toiling in the Tigers’ minor league farm system, the 20-year-old Smoltz was acquired by Atlanta Braves general manager Bobby Cox for veteran pitcher Doyle Alexander on August 12, 1987. At the time of the transaction, Smoltz was 4-10 with a 5.68 ERA pitching for the Double-A Glens Falls Tigers of the Eastern League, while Alexander, 36, was a 16-year veteran with a 5-10 record and a 4.13 ERA in 16 starts for the Braves.

“I was very disappointed,” Smoltz would recall years later. “I thought, ‘I’m going to the worst team in baseball.’ Then I switched my thoughts, realizing I can get to the big leagues quicker and help turn this franchise around, which has been a great story.”

In 1987, Alexander went 9-0 with a 1.53 ERA during his seven weeks with a Detroit team that would qualify for the postseason, but the Tigers would lose in the ALCS to the Twins in five games. By the next year, and after only a half-season at Triple-A Richmond, Smoltz was pitching in the majors, finishing with a 2-7 won-loss record. Amazingly, only a season later, he was pitching in the All-Star Game.

Over his first five full seasons, from 1989 to 1993, Smoltz averaged 14 wins, 34 starts and 182 strikeouts with a 3.42 ERA. This stretch also included the Braves’ remarkable 1991 campaign, a worst-to-first season in which Atlanta lost an epic seven-game World Series title to the Minnesota Twins. The ’91 Fall Classic is arguably most remembered for Jack Morris’ 10-inning masterpiece in Game 7, shutting out the Braves, 1-0, where Smoltz tossed 7 1/3 scoreless innings while earning a no-decision.

Smoltz’s pitching repertoire included a trio of exceptional pitches: an impressive fastball, a slider that veered away from right-handed batters, and a splitter that darted under the swings of left-handed batters.

Led by the “Big Three” of Smoltz, Greg Maddux and Tom Glavine, the postseason would become quite familiar for Atlanta. Smoltz, who would became the only Braves player to be part of the franchise’s historic run of 14 consecutive division titles from 1991 to 2005, would appear in 41 postseason games, compiling a 15-4 record, a 2.67 ERA and a record 199 strikeouts. In five World Series, including the 1995 triumph over the Indians, Smoltz started eight games, finishing with a 2-2 record and a 2.47 ERA.

“I just relished it,” Smoltz said. “I could not wait for the big moment, the big game.”

Plagued by arm problems throughout his big league career, the first of a half-dozen surgeries took place in September 1994 when doctors removed a large bone spur and some chips from the back of his right elbow.

“Everybody felt I needed this to be on par with Greg and Tommy,” Smoltz said after winning the Cy Young. “At least winning the award takes the pressure off of that. I know down the road I’ll be honored to have played with those two guys.”

Despite having orthoscopic elbow surgery to remove bone chips prior to the season and a four-week disabled list stint with an inflamed elbow during the season, a resilient Smoltz finished 1998 with a 17-3 record. The following year, spending time on the DL twice with a strained elbow, he tried to compensate for the pain by dropping down his pitching motion from overhand to a three-quarters delivery to finish 11-8.

The worst of Smoltz’s injuries came in 2000 when he missed entire season after tearing the medial collateral ligament in his right elbow in spring training and undergoing Tommy John surgery in March. A comeback in 2001 was derailed after five starts with time spent on the DL, but when he returned in July he was converted into a relief pitcher as the best chance to maximize his health.

After 159 wins as a stalwart starting pitcher for the Braves, the versatile Smoltz began anew as the team’s closer and the results were superb. Finishing out the 2001 season as the team’s new fireman, he had 10 saves in 11 chances with a 1.59 ERA.

“It has been a mental adjustment. It hasn’t really been that bad of a physical adjustment,” Smoltz said at the time. “As a starter, you know when you’re going to pitch. You prepare to pitch a certain day. As a closer, you wait to see if your team’s going to put you in that position. That’s probably been the hardest transition.”

In 2002, his first full season in the closer role, Smoltz set the NL record by converting 55 saves (tied by the Dodgers’ Eric Gagne in 2003). Similar to his success as a starting pitcher, he would dominate his new role in the bullpen by saving 154 games in 168 opportunities in his 3½ seasons as an elite closer. Injuries continued to be a concern during this period as well, as he suffered from right elbow tendinitis in 2003 and had right elbow surgery in October 2004 to clean up scar tissue. 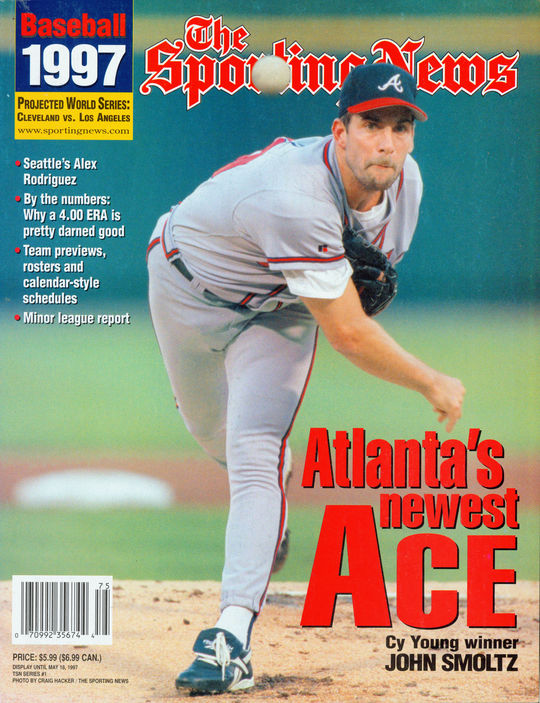 Preferring to be a starter, Smoltz was a workhorse after returning to the rotation in 2005, averaging 15 wins and 222 innings over the next three seasons. But two months after winning his 200th career game in May 2007, he was back on the DL with right shoulder tendinitis.

After five starts early in the 2008 season, one of which included him becoming the 16th big league pitcher to reach 3,000 career strikeouts, it was announced that Smoltz would need season-ending shoulder surgery.

“I love to compete,” Smoltz said. “But I can’t compete against my body anymore.”

Signed as a free agent by the Red Sox in January 2009, struggled to a career-ending 3-8 campaign split between Boston and the Cardinals. 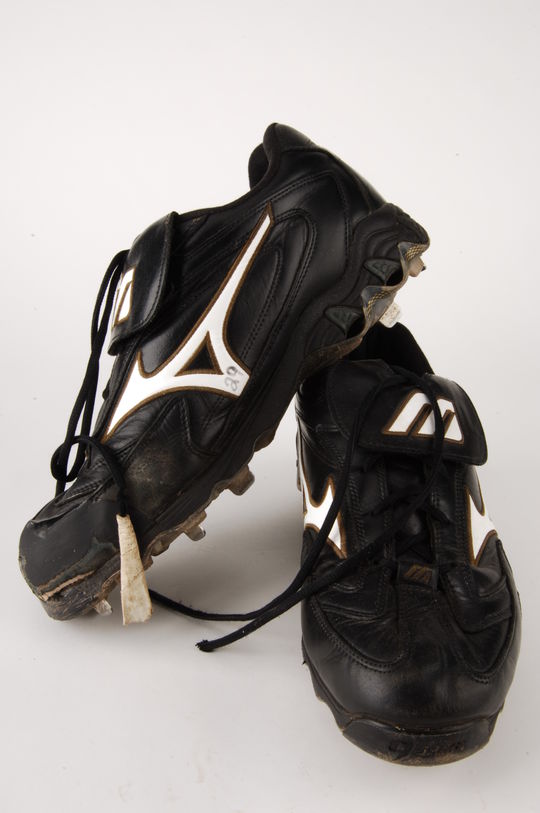 John Smoltz wore these cleats on May 24, 2007, when he defeated the Mets 2-1 for the 200th victory of his career. Smoltz became the first pitcher with 150 saves to reach that milestone. - B-118-2007 (Milo Stewart, Jr./National Baseball Hall of Fame Library) 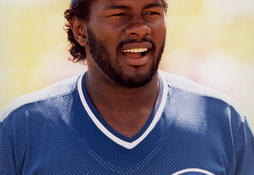 Lee Smith returns to the ballot for the 13th time 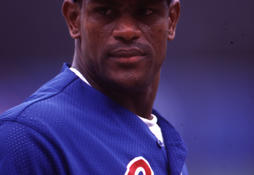