Larry Yount, King of the One Game Wonders

Part of the BASEBALL HISTORY series
Written by: John Odell

Among the treasures of the Hall of Fame’s Library archives are our personnel files, which feature every player who ever appeared in a major league game. We add to the archive throughout the year, creating a new file each time a player makes his debut. The data we most like to collect goes beyond how a he did at the plate or on the mound – we can get that in other places.

Instead, we focus on gathering the personal information that does not show up in the box score. The result is an astounding collection of the common and unusual, typical and odd, and tragic and triumphant that fleshes out the world of baseball beyond the ballfield.

Alphabetically, the files run from 2008-09 Mariners closer David Aardsma to Alex Zych, former equipment manager of the Kansas City Royals. In terms of volume, Babe Ruth’s eight thick files top the list, while the careers of untold hundreds (or thousands) are summarized with a handful of clippings or less. Of course, there are the eight players with more than 3,000 games, but the archive also more than 1,000 players whose entire career is comprised of a single game.

While most of these “one-game wonders” are pinch hitters, pinch runners, and September call-ups, you may have heard of a few of the players. Perhaps the most famous is 3-foot-7-inch Eddie Gaedel, famously sent up to the plate by Bill Veeck in 1951 to become the shortest player ever to appear in a big league game.

Fans of 1989’s Field of Dreams may remember Burt Lancaster as Archie “Moonlight” Graham, but fewer know that Graham was a real major league ballplayer. The movie took surprisingly few liberties with his life. As portrayed in the film, Graham really was a member of the single-game club. He had only a defensive appearance in the outfield, never made it to bat, and never played in the majors again. And he really did go on to become a beloved doctor in Chisholm, Minn.

Pitcher Bert Shepard might sound familiar to a few baseball fans who are also World War II buffs. Shepard’s minor league career ended when he entered the service, and his chances to make the majors seemed to end when he lost his leg while being shot down over Germany. After the war, fitted with a prosthetic leg, he made his only big league appearance when he pitched five-plus innings (and gave up only one earned run) on August 4, 1945 for the Washington Senators. All these stories, and more, can be found in the files. 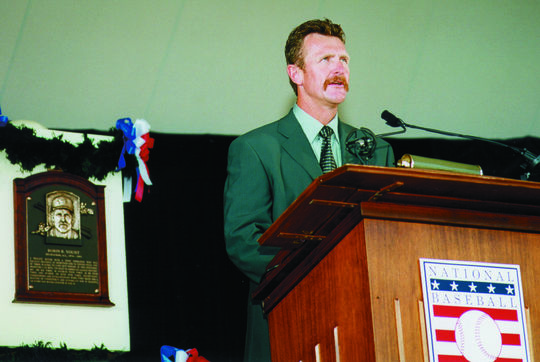 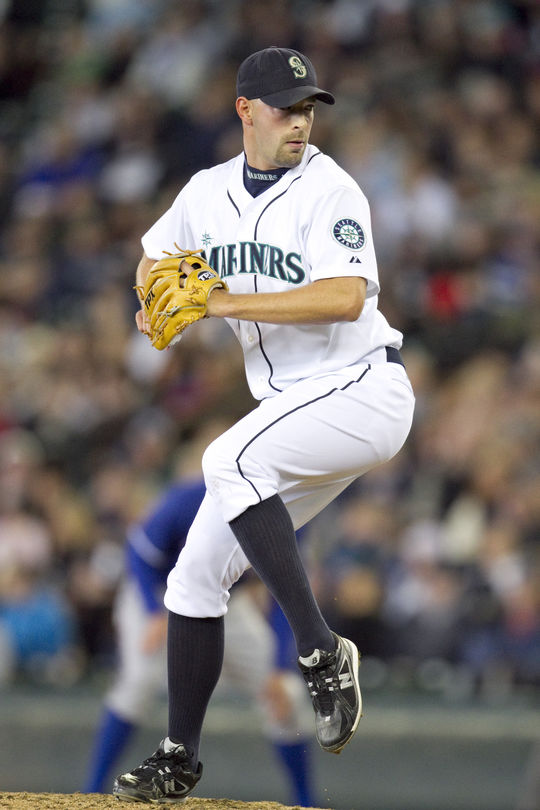 There are also a few that are more unique. “Unique” is a word used carefully at the Hall because baseball’s history is so long, has been so well recorded, and can be fact-checked so thoroughly. For instance, Eddie Gaedel might have walked in his only career plate appearance, but that is not unique. With a few keystrokes we can learn that a half-dozen other players had careers that exactly matched Gaedel’s, minus the height.

So it is no small thing to say that no one, no one, had a more unusual debut than Houston Astros pitcher Larry Yount.

Of course, plenty of non-major league players are in the files, including numerous Hall of Fame managers and executives. And yet, because of the strange circumstances of Larry Yount’s not playing, he is counted as a major leaguer.

Larry Yount made his big league debut in a game that he never appeared in. Then he never played the majors again.

Drafted out of high school by Houston in 1968, Yount worked his way up the minor league ladder and received his call up to the parent club in September 1971, toward the end of his fourth season in pro ball. During that year, he had fanned 121 in 137 innings in Triple-A Oklahoma City, and the Astros wanted to see what he could do in the bigs. Uncle Sam, however, had first dibs and called on him to complete a week of military service, a common occurrence during the Vietnam War era. So after a week of no baseball at all, Yount finally ended up in the Houston bullpen. Maybe the layoff had an effect, and maybe not. It certainly did not help. 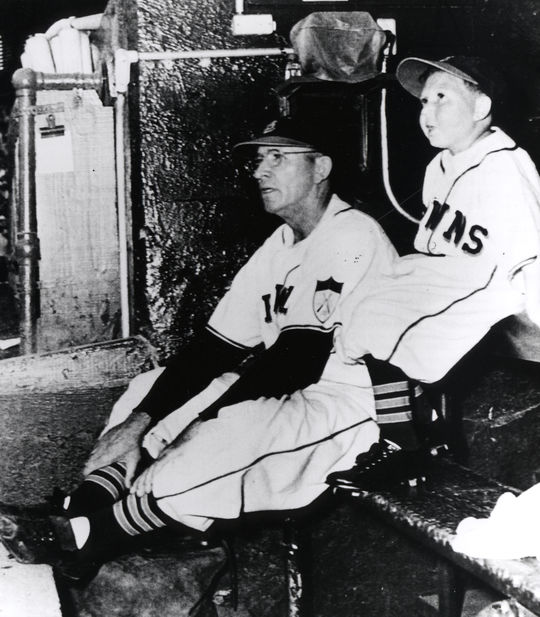 On Sept. 15, Yount’s opportunity came. With the host Astros trailing the Atlanta Braves 4-1 in the top of the ninth, Houston manager Harry “The Hat” Walker called Larry’s number. It was the perfect low-pressure situation to get a rookie’s feet wet. With two weeks left in the season, the Astros were hovering around .500, some 10 games out of the NL West race. Atlanta was also playing out the string. There was no save to blow, no pennant on the line. Only 6,513 fans attended the Wednesday night contest, and goodness knows how few were still in attendance when Yount got the nod.

As Larry warmed up in the bullpen, his elbow began to stiffen, but he buckled down and reported to the game, where he was announced as the next pitcher. He hoped the elbow would loosen up with a few more pitches. “You figure you’ll run out to the mound, that the adrenaline will be pumping and that you’ll figure out what’s wrong,” Yount recalled later. “I went to the mound, and took a couple of tosses.” The pain, however, got worse as he took his final warm-up pitches. Yount was smart and did not want to risk his career in his debut. He called in the trainer, who took him out. Both surely expected that Yount’s turn would come again soon. 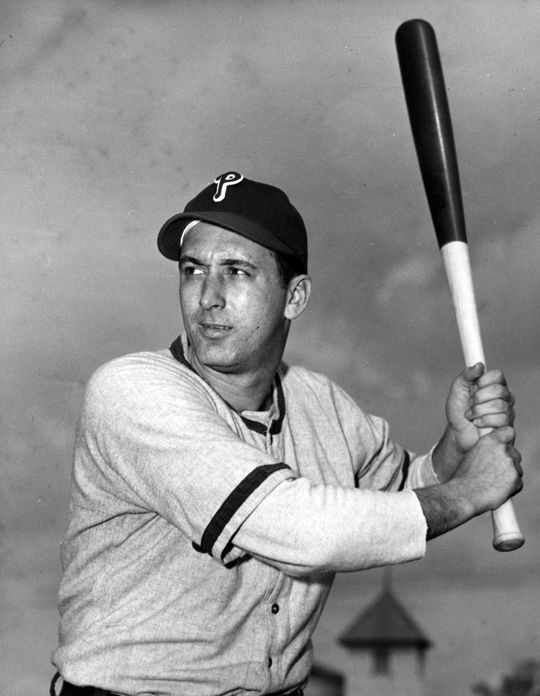 The 1971 season ended without Yount being called upon again, not unusual given the 40-man rosters at the end of the year. He played a fall instructional league without any trouble. He came to Spring Training in 1972, where he was the last player cut. The other pitchers he was competing against were out of options. Since Yount was not, the club could, and did, send him back down. He returned to the minors.

His elbow was not permanently injured. “It was a non-event, a glitch that had no factor in what followed,” Yount explained later, without excuse. “I just never quite got the job done.”

Over the remainder of his pro career, he pitched OK, just not well enough to be called up. He continued to work hard. He was traded to the Milwaukee Brewers, which had recently signed a phenom from California. Larry knew him. It was Robin Yount, Larry’s younger brother. The younger Yount jumped from short-season A-ball to the majors in one year. Larry persevered, but eventually accepted the writing on the wall and retired from the game after 1975. 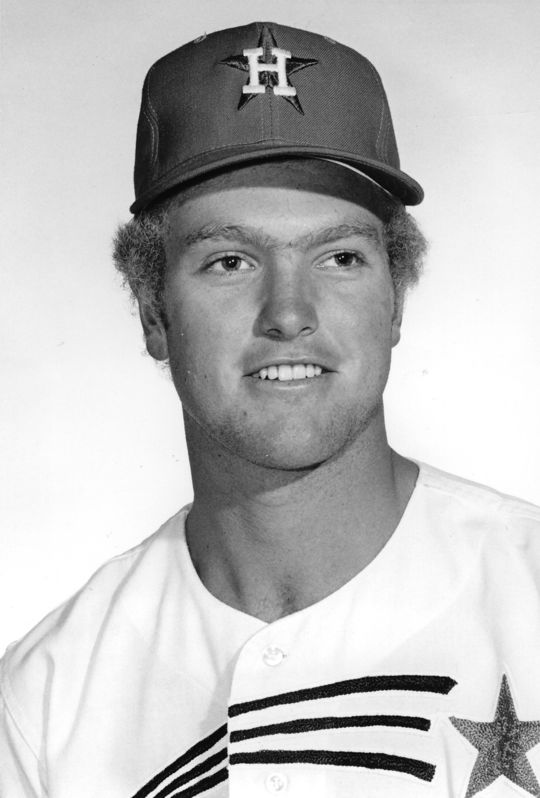 Larry Yount in an Astros uniform.

“My brother Larry. He taught me how hard work and dedication to the game was the only way to make it.”

For his efforts on that September evening, Larry Yount earned the distinction of being the only pitcher in major league history who never appeared in the only game he ever played in. He never threw a major league pitch, never faced a batter, and never played again. However, because he was officially announced as the pitcher, he is in baseball’s record book and he has a file in the Hall of Fame.

Incidentally, Larry Yount’s player file is not the only place in the Hall of Fame where he is referenced. In 1999, his younger brother, Robin, after a 20-year career, all with the Brewers, was elected to the Hall of Fame. That July, Robin walked onto the Induction stage in front of over 50,000 people in Cooperstown. Larry was there, too, and heard Robin’s thoughtful Induction speech. Here, in front of a crowd some eight times larger than the one in Houston that saw Larry warm up and never throw a pitch, the elder Yount found out what his little brother had learned from his experience.

“My brother Larry. He taught me how hard work and dedication to the game was the only way to make it.”

Robin Yount’s speech is also in the collection. You can look it up. In the Hall of Fame Library. 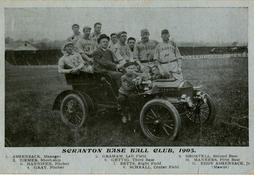