Cooperstown has been an incredibly popular place this year, especially with the Hall of Fame turning 75.

We welcomed 30 recently-retired major league stars for the Hall of Fame Classic in May and 52 Hall of Fame members for Induction Weekend. We have had our share of other special guests as well. President Obama, golfer Andy North, Natalie Morales and Jenna Bush Hager from the Today Show, Page McConnell from Phish and 13-year old George Christopher from Hazlet, NJ, our 16 millionth visitor.

On September 16, we welcomed multi-talented singer/drummer/guitar-playing sensation Jack White, his bass player Dominic Davis, singer Olivia Jean and long-time tour manager Lalo Medina. Between shows in Cleveland and at Fenway Park, the tour bus made a scheduled stop to check out the Museum. Anyone who appreciates analog music such as Jack does, would certainly appreciate the authenticity of Cooperstown.

How serious is Jack about baseball? He’s dovetailed 14 major league games into his current concert tour. He caught up with Paul Simon and Eddie Vedder at SAFECO Field, also both serious baseball fans. Simon toured the Hall of Fame in 2006. And when Jack threw out a ceremonial first pitch in Detroit, he wore a Stars jersey, out of respect to the Negro leagues team that called The Motor City home.

He met Al Kaline last week and found the experience to be very cool. Al, one of the nicest and approachable people to walk the earth, said, “Hey Jack White! I have been wanting to meet you!” He trembled as “Mr. Tiger” presented him with an autographed ball.

For a kid who grew up in the shadows of Tiger Stadium, it was heaven. His mom worked for Catholic Charities and every once in a while she had access to the Bishop’s tickets, and take Jack, one of 10 children, to Tiger Stadium. One of his brothers worked at the ballpark in concessions.

“I love the Tigers, especially the ’84 team,” Jack told me. “I have great memories of going to the ballpark with my mom.” He counts his Alan Trammell game-worn jersey, presented to him by his management team, among his favorite items.

“And I am still very much so a lifetime Tigers fan. The team this year is incredible: J.D Martinez, Ian Kinsler, Miggy, Sherzer….it goes on and on. They have incredible talent all over the roster and should be world champions this year because of it.” 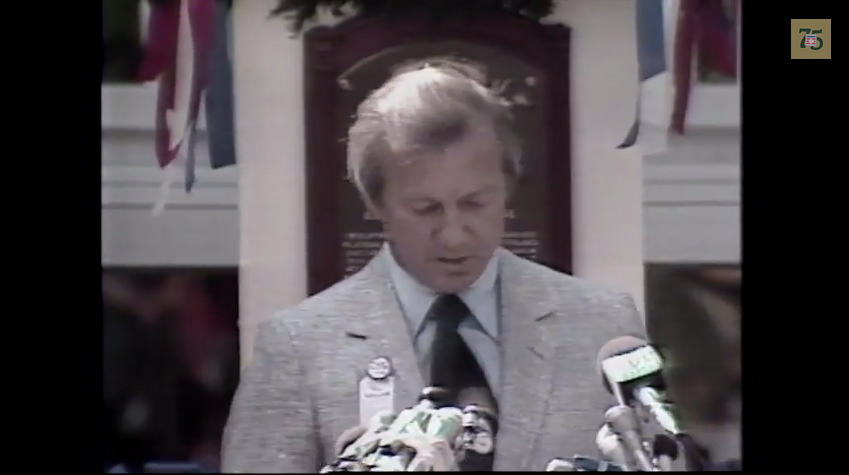 I have been a part of many tours at the Hall of Fame over two decades, but none has been more enjoyable than this one, given Jack’s profound respect and appreciation baseball history.

When someone walks into your office and tells you that they are reading ‘The Chalmers Race: Ty Cobb, Napoleon Lajoie, and the Controversial 1910 Batting Title That Became A National Obsession,’ you quickly realize you have a serious student of the game in your presence.

“I love the dead ball era,” Jack told me. “It is so strange and full of romance. No love for home runs? One ball for the entire game? Spit balls allowed, no real film footage from then, bunters praised above all? It’s incredibly intriguing.” He counts Reds’ Manager Pat Moran’s 1919 World Series ring among his most prized possessions.

A tour through the Museum’s collections storage proved mesmerizing. Ty Cobb’s glove. Kaline’s jersey. A bat used by Lou Gehrig that includes the indent from a baseball’s stitches, he swung so hard. “This is crazy!” he exclaimed with wide-open eyes.

A trip to the Library archive was next, where he was introduced to a few items, including baseball’s first picture book from 1867 called Base Ball As Viewed By A Muffin, as well as one of the most poignant fandom items in not only baseball, But American culture, an incredibly detailed 1912 scrapbook filled with hundreds and hundreds of autographs, secured by two baseball-loving brothers, who donated it to the Museum 67 years later.

A visit to “Baseball at the Movies” brought instant attraction to Robert Redford’s Wonderboy and Savoy Special bats. Jack’s three (his favorite number) favorite baseball films (his favorite number is 3)? The Natural, Field of Dreams, and A League of Their Own.

As we meandered through the entire Museum, stopping to see John Fogerty’s guitar “Slugger” and his hand-written progression of lyrics to “Centerfield,” I asked Jack what I also asked Graham Nash, Kenny Loggins and Tom Petty’s drummer, Steve Ferrone in years past: Baseball has 5-tool players. Who would you consider a 5-tool musicians?

“Paul McCartney, because he can also drum. Prince too, and Stevie Wonder.”

Leaving the Museum, as the group made their way to the Cooperstown Diner, I had to stop and marvel at White’s baseball acumen. He’s an incredibly talented musician, with an incredible passion for baseball history.

“It was great being in Cooperstown,” White said. “I learned that the Hall of Fame’s collections are completely acquired from donations and not purchases, which is a beautiful thing, where the term “muffed” came from, that bats can be as heavy as a player likes, and that Ty Cobb was an actual human being who walked the earth among us.”

We hope you’ll hit the road Jack….and make your way back to Baseball Mecca.