Seven decades ago, Bob Neighbors was reported missing in action. After an unorthodox route to baseball, the former shortstop served the United States proudly during two wars.

Ultimately, Neighbors became the last major leaguer to be killed in combat.

Following a “cup of coffee” in the majors, Neighbors exchanged a baseball jersey for a military uniform in his early twenties to serve in World War II. Deciding to make the military his career, he would make the ultimate sacrifice during the Korean War.

Born in Oklahoma in 1917, the 18-year-old Robert Otis Neighbors hadn’t really played much baseball before attending a tryout in nearby Arkansas for the Class D Siloam Springs Travelers in 1936. He not only made the Arkansas-Missouri League team but would be in the majors within three years.

In recalling his unique baseball journey, the 5-foot-11, 165-pound Neighbors once said: “I had been playing softball but had always wished to play baseball. I went to Siloam Springs, Ark., to try out and made the team. I played my first complete game of baseball at Siloam.

“At Siloam is where I became a pro in baseball.”

In a 1941 newspaper article, Neighbors said he had gone through high school without playing the game – instead opting for fastpitch softball. One day he decided he would become a baseball player and set out for a baseball school in Hot Springs, Ark., but while on his way a cousin in nearby Fort Smith suggested he talk to a local sportswriter first. 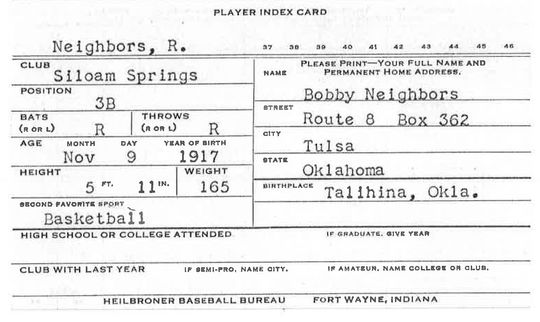 Bob Neighbors got his start in professional baseball with the Class D Siloam Springs Travelers in 1936, having played primarily fastpitch softball up to that point. This contract card detailing his career is a part of the Library collection at the Hall of Fame.

“The sportswriter gave me a recommendation for a tryout with Siloam Springs,” Neighbors explained. “So I got on the club. For a while I didn’t think I’d make it. About midseason the manager had a new fellow brought in to take my place. I decided I better do something. So in a doubleheader that day I hit four home runs and never had any more trouble sticking with the club.”

Moving up the minor league ladder, Neighbors found success along each rung that included stops with the Evangeline League’s Abbeville (La.) A’s in 1937, the East Texas League’s Palestine (Tex.) Pals in 1938 and the Three-I League’s Springfield (Ill.) Browns in 1939.

It was near the end of the 1939 big league season that Neighbors was called up for a two-week audition for the floundering St. Louis Browns, who would end the year last in the American League with a 43-111 record. The 21-year-old, who would make his big league debut on Sept. 16 as a late-game defensive replacement at shortstop, played a total of seven games, batting .182 (2-for-11) with a homer and three runs scored. 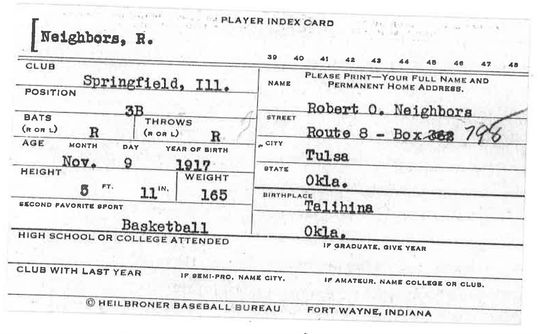 Bob Neighbors found success at each level of the minor leagues, ascending the ranks to reach the Three-I League's Springfield Browns in 1939.

Never to play in the majors again, the young shortstop’s professional baseball career ended with stops with the American Association’s Toledo Mud Hens in 1940 and the Texas League’s San Antonio Missions in 1941.

After the attack on Pearl Harbor, he, like many, enlisted in the armed forces. His military service began in 1942 with the Army Air Force and was spent as an accomplished pilot in the European Theater, in the Pacific, and serving with the 22nd Air Transport Training Detachment at Sheppard Field in Wichita Falls, Texas, the Maxwell Air Base in Montgomery, Ala., and in California at Fairfield-Suisan Army Air Base and Hamilton Field.

After wearing the uniform for Uncle Sam, many big leaguers who batted for the United States returned to the diamond. Among the St. Louis Browns, those who returned to the team after serving in WWII included Wally Judnich, Johnny Lucadello, Joe Grace, Steve Sundra, Al Zarilla, Johnny Berardino and George Archie. But not Neighbors. 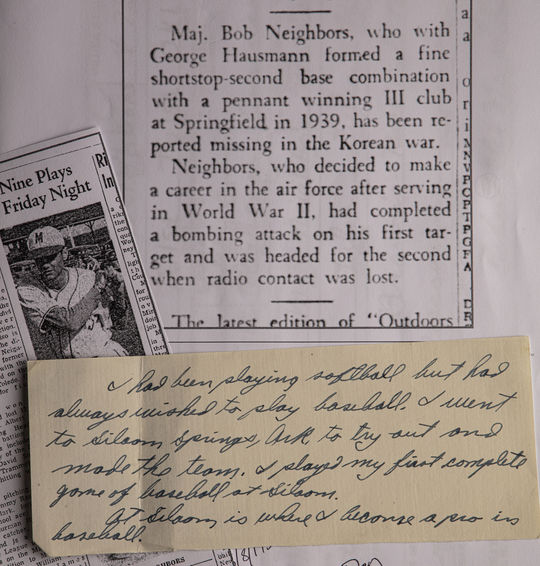 Bob Neighbors was the last major leaguer to be killed in combat, having been reported missing in action and presumed dead after a bombing mission during the Korean War. (Milo Stewart Jr./National Baseball Hall of Fame and Museum)

Instead, Neighbors chose to remain in the military. And while his diamond skills were still evident as he both played on and managed successful military teams, he also saw combat during the Korean War in the early 1950s.

By the time the Korean War fighting ended after three years on July 27, 1953, almost 40,000 Americans had died and over 100,000 were wounded. More than 100 major leaguers served, but most remained stateside. Neighbors was the only big league baseball player killed in combat during the Korean War.

During the Korean War, Air Force Major Neighbors with the 13th Bomb Squadron of the 3rd Bomb Group was a B-26 Invader pilot. Stationed at an air base in Korea, he and his two other crew members were on a night mission on Aug. 8, 1952. After reporting they had been hit and were bailing out, they were not heard from again and were reported missing.

On Sept. 3, 1952, newspapers across the country reported Neighbors was missing in action.

“He (Neighbors) was on a bombing mission and had successfully carried out his attack on the first target,” wrote the Sporting News. “En route to the second target, trouble developed and radio contact with him was lost.”

Neighbors’ wife, Kitty, was advised by the War Department that his plane was damaged by enemy fire during a night bombing mission on Aug. 8, and that the crew reported they were bailing out over enemy territory. He had a 2-year-old son, Cameron, at the time.

Officially listed as missing in action and presumed dead, Neighbors’ body has never been recovered.

His legacy as a hard-working ballplayer and a hero off it, however, remains intact. 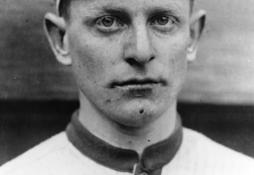 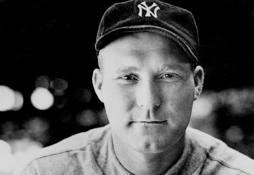 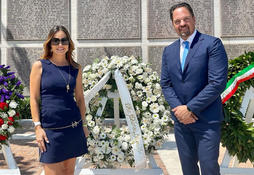 Mike Piazza commemorated Memorial Day on May 31, 2021, by taking part in a ceremony at the Florence American Cemetery in Italy. 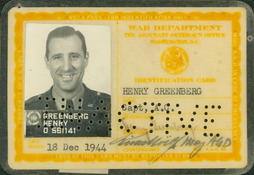