The era ends with the conclusion of the 2016 season as the Braves prepare to move to SunTrust Park in 2017. But for the Hall of Famers who called Turner Field home, the memories are fresh. 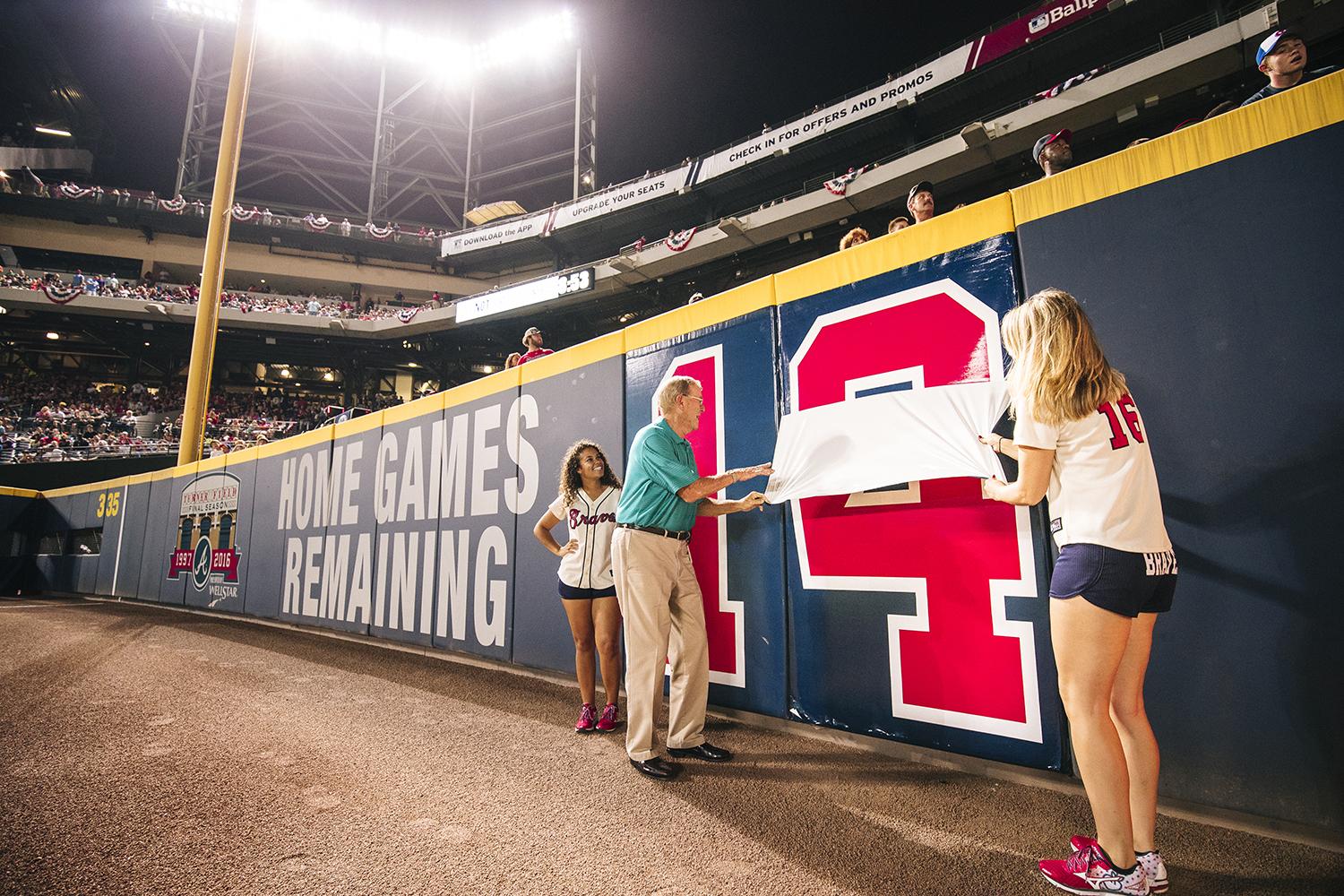 The Braves count down the number of home games left by having someone connected to Braves history tear down a banner on the left field fence as soon as a game becomes official. On September 10, Paul Snyder, who played a central role in the Braves success in the 1990s, had the honors. He served at different times in the roles of amateur scouting director, assistant to the general manager, and director of player development for the Braves from 1977-2006. (Jean Fruth / National Baseball Hall of Fame)

“It was a special time,” said Greg Maddux, who won 72 games at Turner Field, all as a member of the Braves and the most of any pitcher in the park’s history. “We sold out first five years at Turner Field, and we always had a packed house there. They were chopping every night, and everybody kind of caught the fever. I remember talking to fans who said they followed the Braves all their life and never thought they’d see this.”

The MLB story in Atlanta began in 1966, when the Braves relocated from Milwaukee and moved into Atlanta Stadium, a venue they shared with the National Football League’s Atlanta Falcons. Rechristened Atlanta-Fulton County Stadium in 1976, the stadium was one of the first generation multipurpose facilities. But the Falcons left for the Georgia Dome following the 1991 season, and the 1996 Summer Olympics in Atlanta provided an opportunity for the construction of a new home for the Braves. 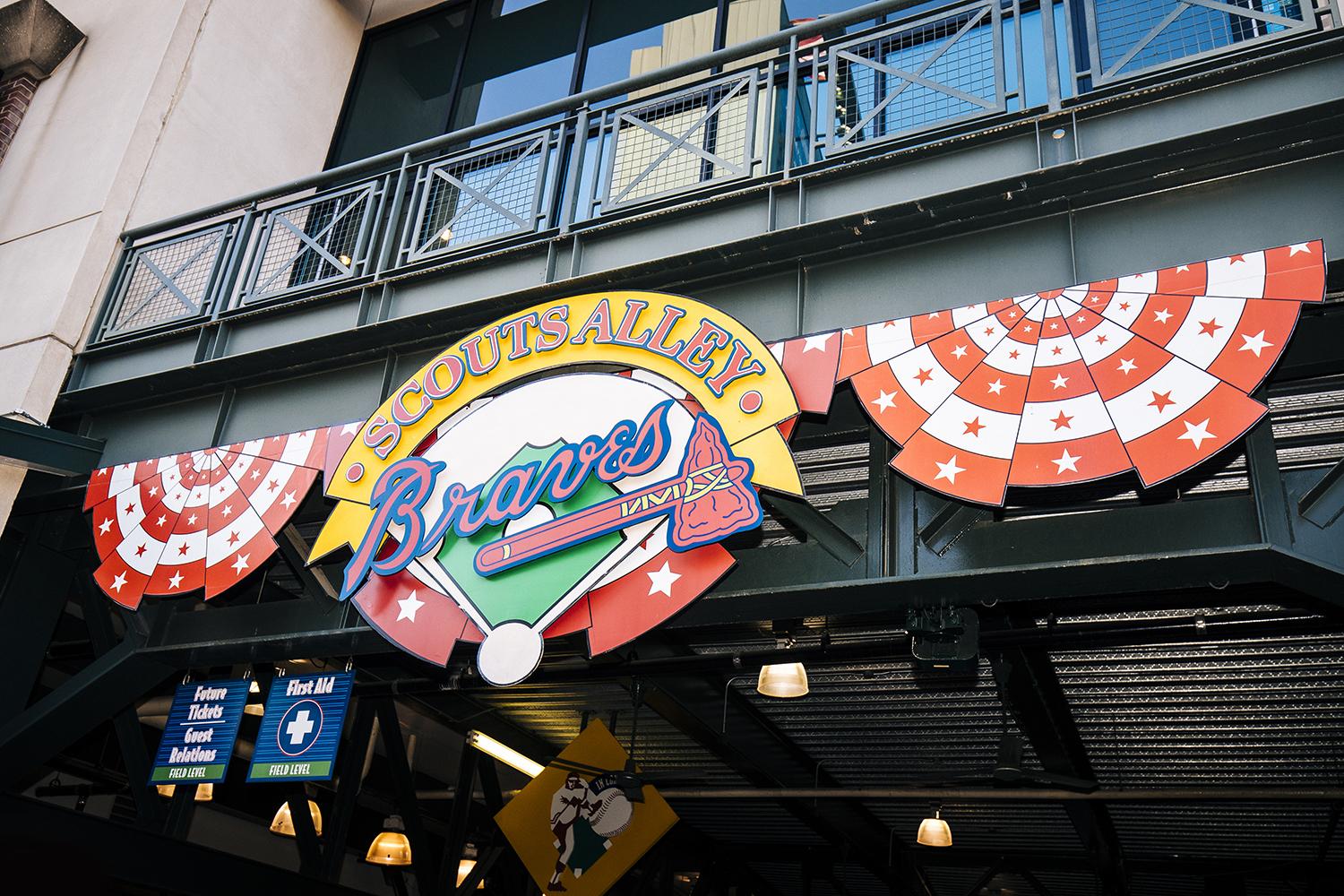 “Individually, I had my greatest years at Fulton County Stadium, including my Cy Young Award year in 1996,” said John Smoltz, who played 20 seasons with the Braves, the final 11 at Turner Field. “But I made the transition to the bullpen at Turner Field, and – fortunately for me – I was able to make the changes to my environment and my mindset.

“I loved Turner Field. It was very fair and a very well put-together stadium.” 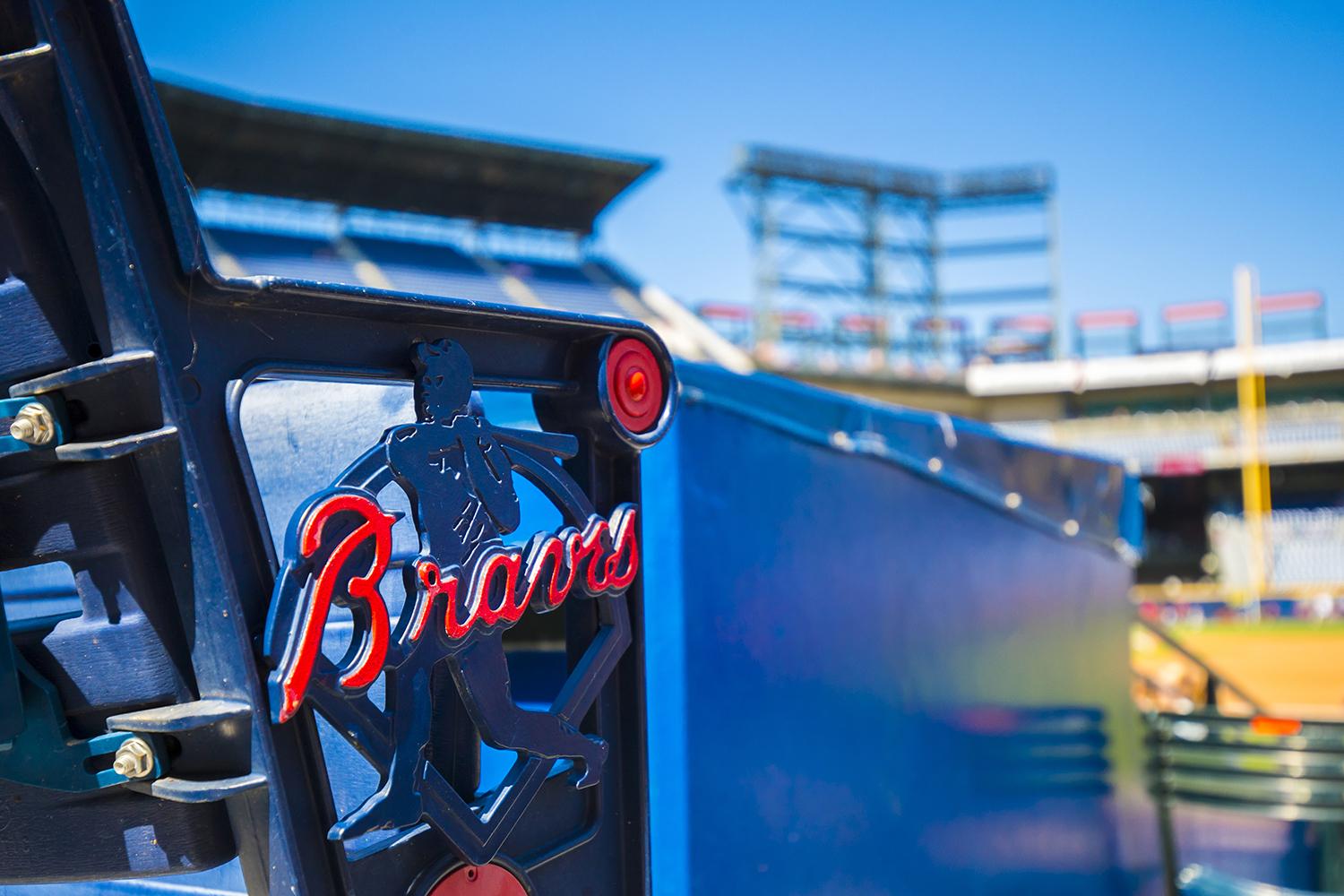 One of the unique features of Turner Field’s seating is the use of end standards, akin to Camden Yards. Where Camden Yards seats feature an Oriole on the end of each row of seats, the Braves feature an image of Henry Aaron swinging a bat and looking far beyond the outfield fences, where 755 of his hits landed. (Jean Fruth / National Baseball Hall of Fame)

The stadium was put together following the Summer Games, retrofitted from Centennial Olympic Stadium that served as the centerpiece for the Olympics. Much of the north end of the Olympic Stadium was removed, transforming an 85,000-seat enclosed venue into a ballpark that held 49,000 fans. The park was renamed Turner Field in honor of Braves owner Ted Turner.

Smoltz won 52 games at Turner Field – the same number as the third member of the Braves’ Hall of Fame mound trio, Tom Glavine. And while Glavine will be forever linked to Atlanta-Fulton County Stadium – having shut out the Indians for eight innings in Game 6 of the 1995 World Series to clinch the title – Turner Field will always be a part of his DNA. 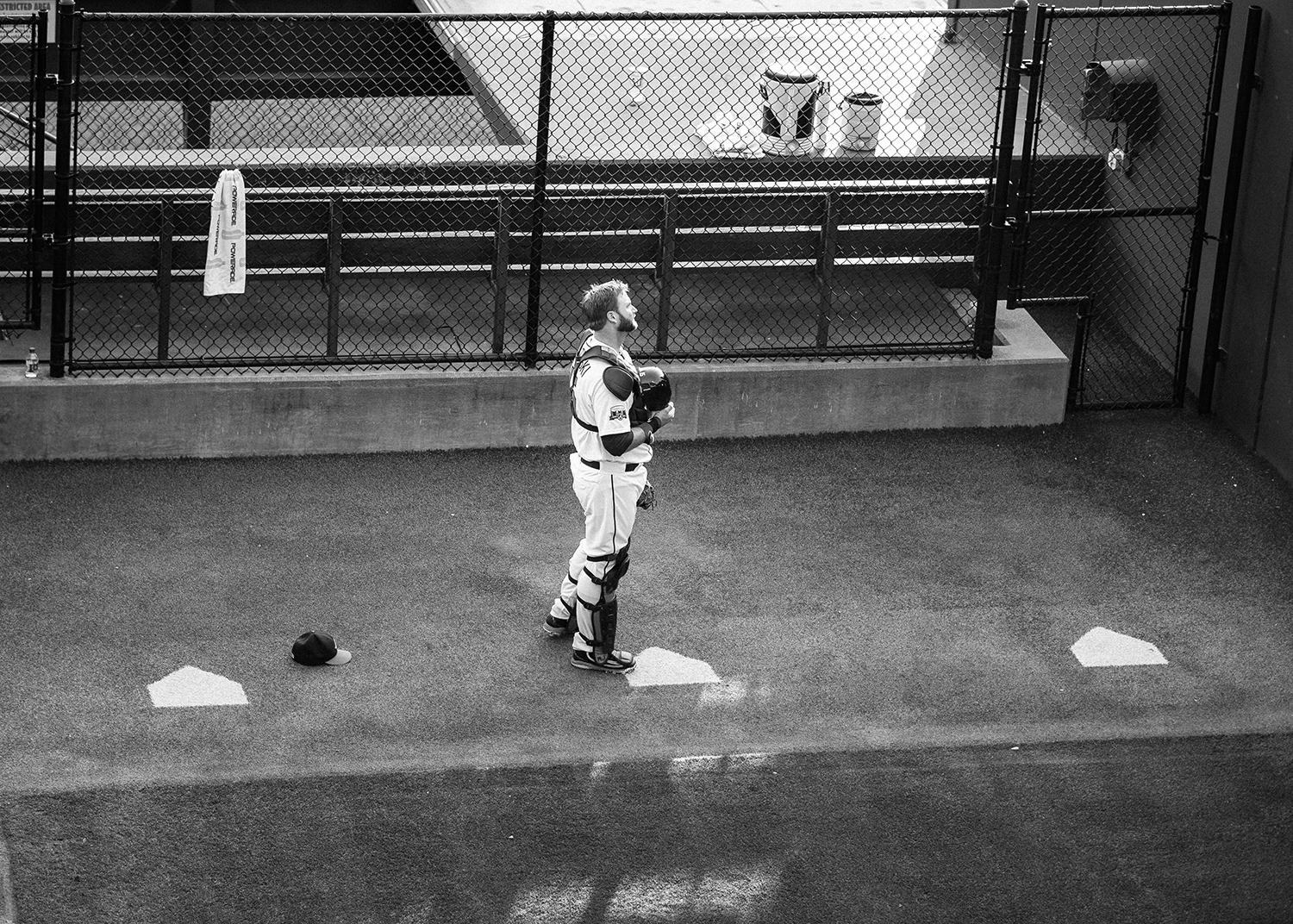 AJ Pryzynski, who has spent 19 seasons behind the plate as a major league catcher, stands for the National Anthem in the Braves bullpen. A unique feature of the bullpen is three home plates, allowing three pitchers to warm up simultaneously. (Jean Fruth / National Baseball Hall of Fame)

“Baseball became a big deal in the city of Atlanta during those years,” Glavine said. “It was a ton of fun to be a part of those teams for the next decade and see the level of passion that people had for ‘their Braves.’

“I remember walking home plate over from the old stadium with Hank Aaron as the symbolic opening of Turner Field, and also the 2000 All-Star Game. We had a bunch of guys on the team that year (Andres Galarraga, Andruw Jones and Chipper Jones joined Maddux and Glavine as All-Stars) and playing in your home stadium was pretty special.” 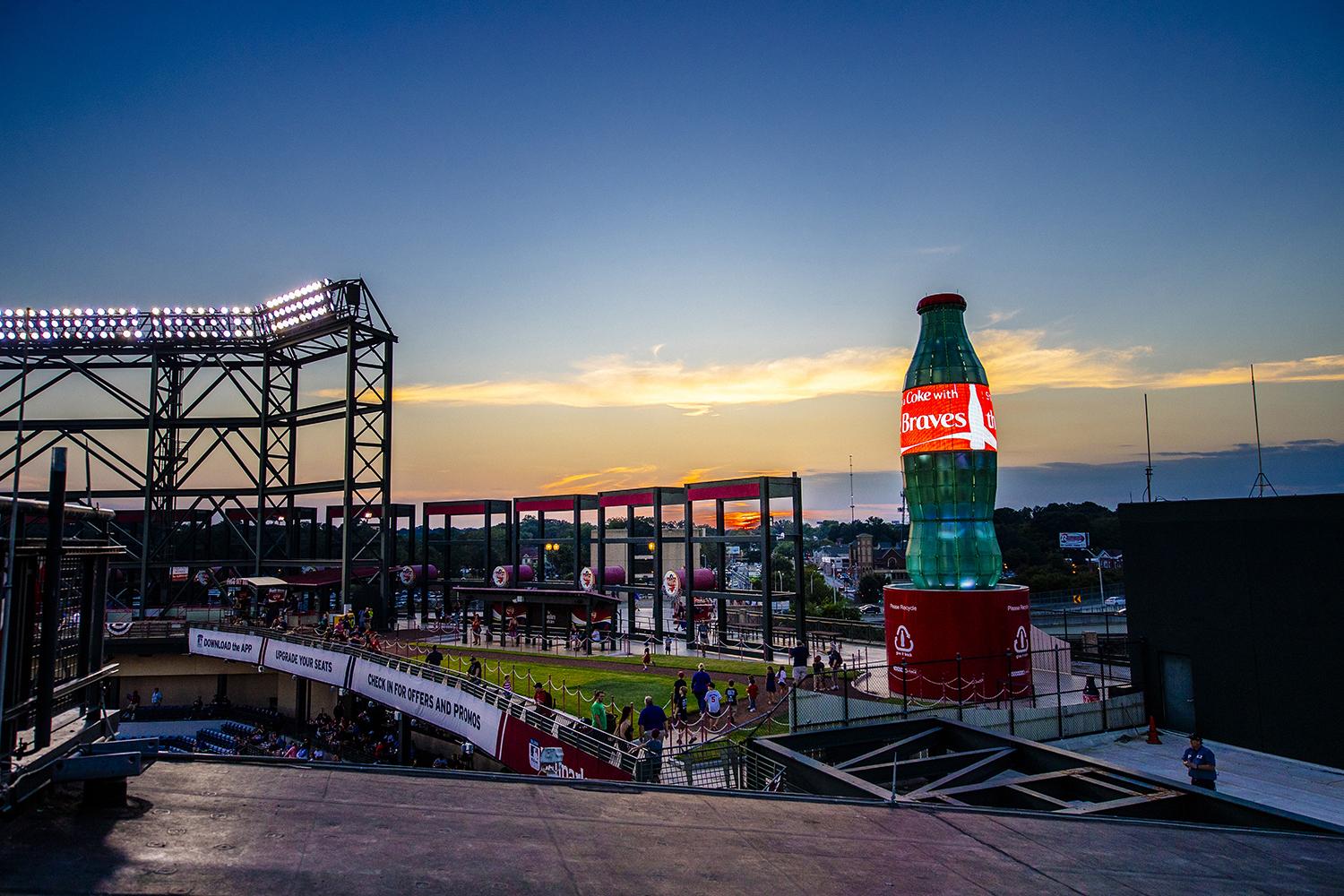 Coca-Cola, based in Atlanta, has had a long relationship with the Braves. This illuminated bottle sits in the left field corner of the upper deck and adjacent to Coca-Cola Sky Field, which has base paths for kids and a picnic pavilion. (Jean Fruth / National Baseball Hall of Fame)

But it takes more than just a “special” team to win as consistently as the Braves did at the stadium affectionately known as “The Ted”.

For Maddux, old fashioned pitching and defense was the difference. For Glavine, that unique element was the constant addition of younger players to an established roster.

And for Smoltz, it was the fourth future Hall of Famer in that dugout – manager Bobby Cox – that provided those Braves with an irreplaceable intangible.

“We had a manager who was going to be a Hall of Famer, and had a mindset that we could follow our manager,” Smoltz said. “That’s simplistic, but the reality is – and I was there the longest so I can speak to it – we wanted to play. It’s not measurable; they can’t feel it, they can’t touch it, so they don’t talk about it. But it is real.”