On April 26, 2017, Gift Ngoepe emerged from the dugout at PNC Park in the fourth inning, replacing Pittsburgh Pirates teammate Philip Gosselin at second base. As he executed his warm-up routine of high knees around the infield, he tried to stay professional and keep a straight face, but the newcomer’s efforts are futile. His mega-watt smile beamed through the night.

His teammates Francisco Cervelli and Josh Harrison recognize that he’s nervous. They check his heartbeat – jokingly, of course – and then nod approvingly to each other, as if to let him know that his feelings aren’t abnormal.

“Cervelli told (Harrison), ‘Hey you gotta listen to this. This is what we live for,’” Ngoepe said. “And then (Harrison) felt my heartbeat too and was like, ‘Hey, we’ve all been there. Just relax and do your thing.’ And that kind of calmed me down.”

But Ngoepe isn’t your average rookie. Sure, he’s endured the struggles that many of his peers have – including a nine-year stint in the minor leagues – but in many ways, the stakes seem higher for the Pirates’ infielder. As the first MLB player ever born in Africa, he’s not only representing his home, but introducing a new sport to a continent filled with rugby, cricket and soccer fields.

For Ngoepe, it was a debut that is now chronicled in Cooperstown. He joins another Pirates player, Dovydas Neverauskas, who also made history in April and now has a place at the National Baseball Hall of Fame and Museum. 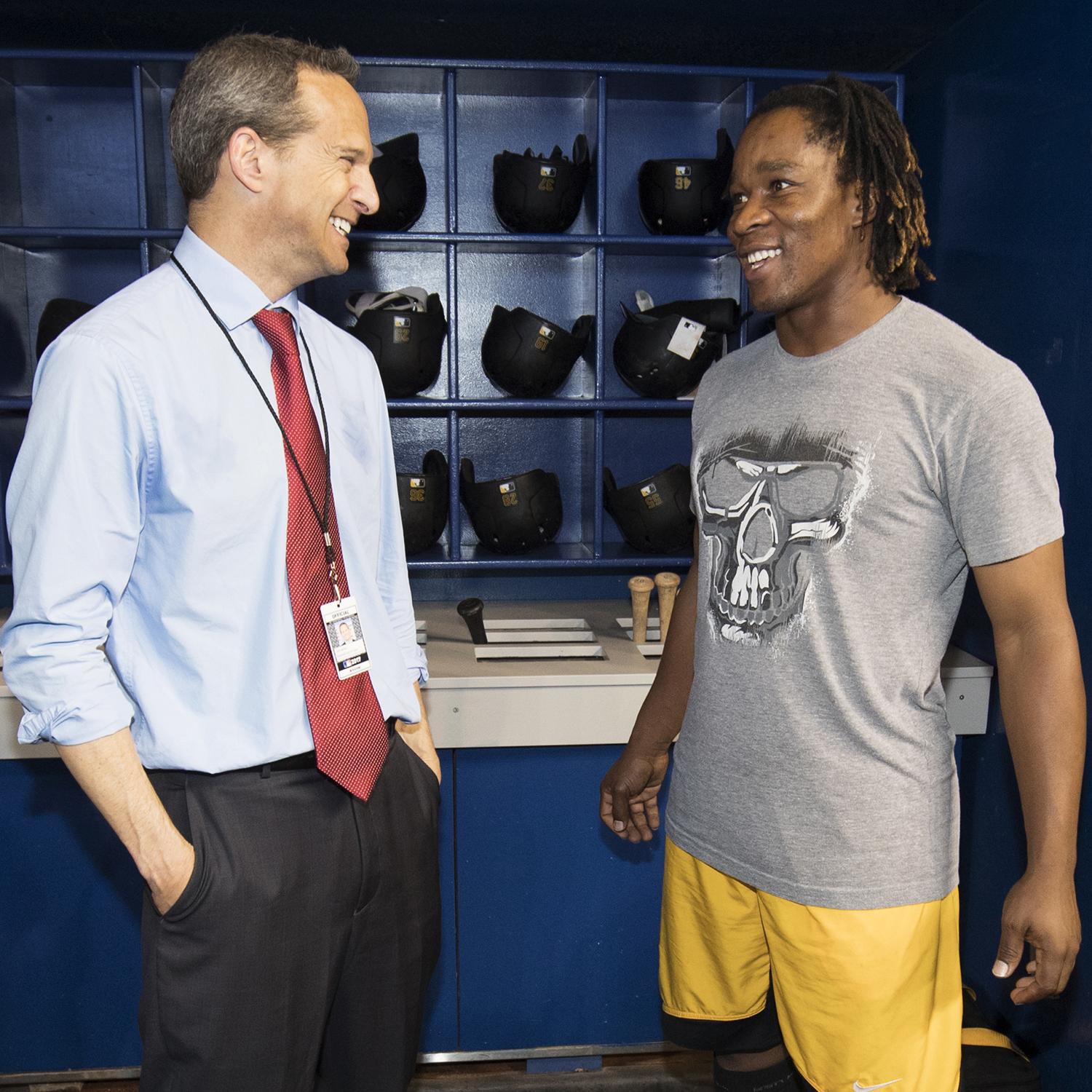 Gift Ngoepe meets Hall of Fame President Jeff Idelson in the dugout at Marlins Park in Miami. Ngoepe, the first player born in Africa to appear in an MLB game, donated the cap he wore in his big league debut to the Hall of Fame. (Jean Fruth / National Baseball Hall of Fame and Museum)

Ngoepe was born in raised in Randburg, a suburb of Johannesburg, in South Africa. He, his mother Maureen, and his brother Victor literally grew up adjacent to a baseball field, where Maureen ran the clubhouse. The three lived in a small room next to the shower stalls.

“My mom saw how much I loved spending time on that field, and she believed that it was my destiny to play in the majors,” Ngoepe said in an article he wrote for the Player’s Tribune. “She had my back when I gave up cricket and soccer in favor of baseball, and when the Randburg Mets raised the money to send me to an MLB academy in Italy where I caught the attention of major league scouts. Even when I wasn’t sure that I’d ever be able to make it to where I am today, she never wavered in her belief.” 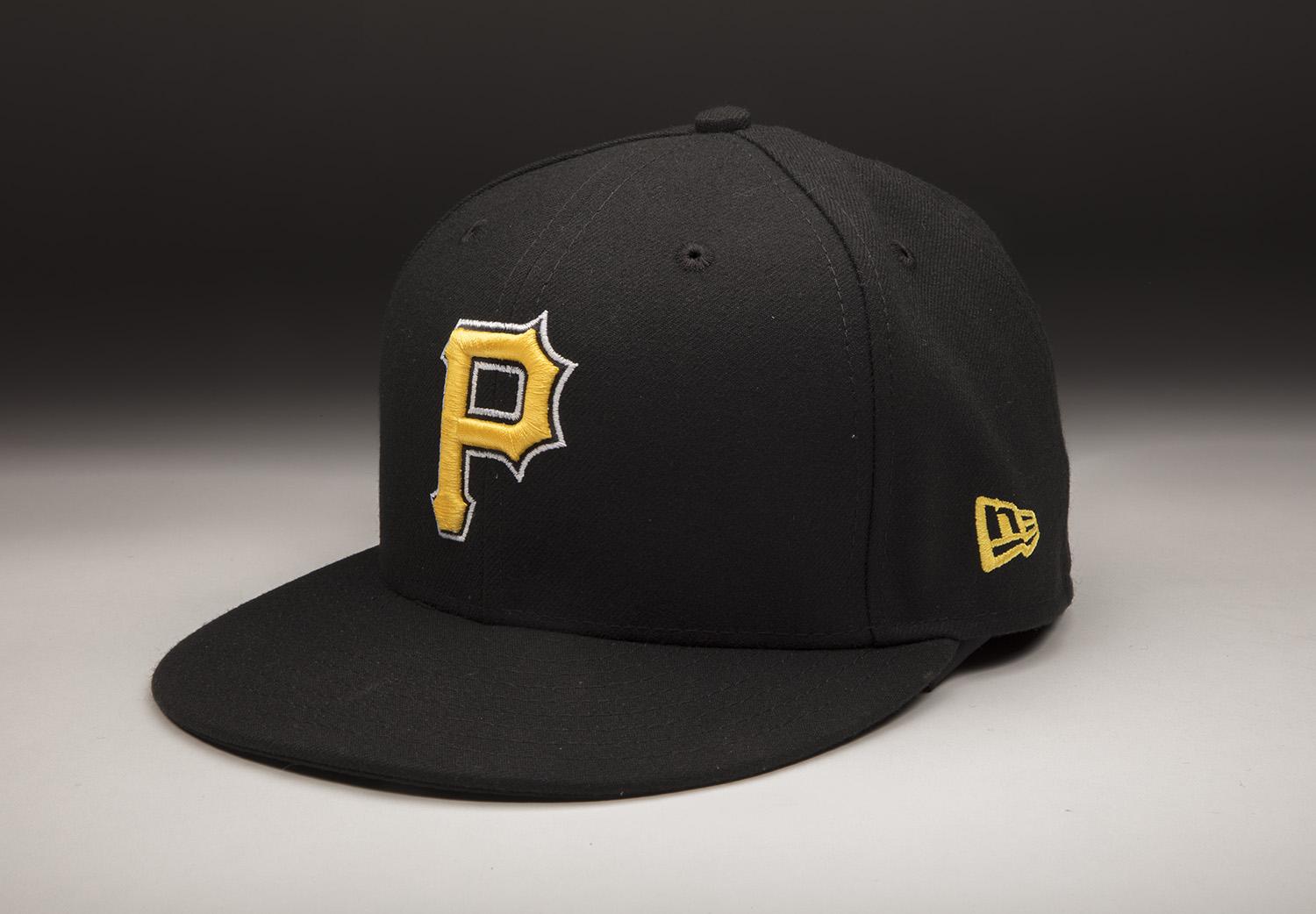 Dovydas Neverauskas donated this cap to the Hall of Fame after his major league debut on April 24, 2017. PASTIME (Milo Stewart Jr. / National Baseball Hall of Fame and Museum)

It was at that academy where Ngoepe caught the attention of Hall of Famer Barry Larkin, who helped hone Ngoepe’s defensive skills, and introduced him to Pirates’ scout Tom Randolph.

“[Barry] asked me ‘Are you here to get signed,’” said Ngoepe. “I said ‘I came out here to learn more and do the best that I can.’ And one day he came up and said the Pittsburgh Pirates scout is interested in you.”

Beginning his journey with the Gulf Coast League Pirates in 2009, he remained in the Pirates’ farm system for the next nine seasons, until the Pirates recalled him from the Indianapolis Indians on April 26. He recorded a single in his first big league at-bat, off of 2016 World Series Champion Jon Lester of the Cubs, no less. His teammates went berserk, screaming “For the motherland!” from the dugout, as he was congratulated by first-base coach Kimera Bartee. 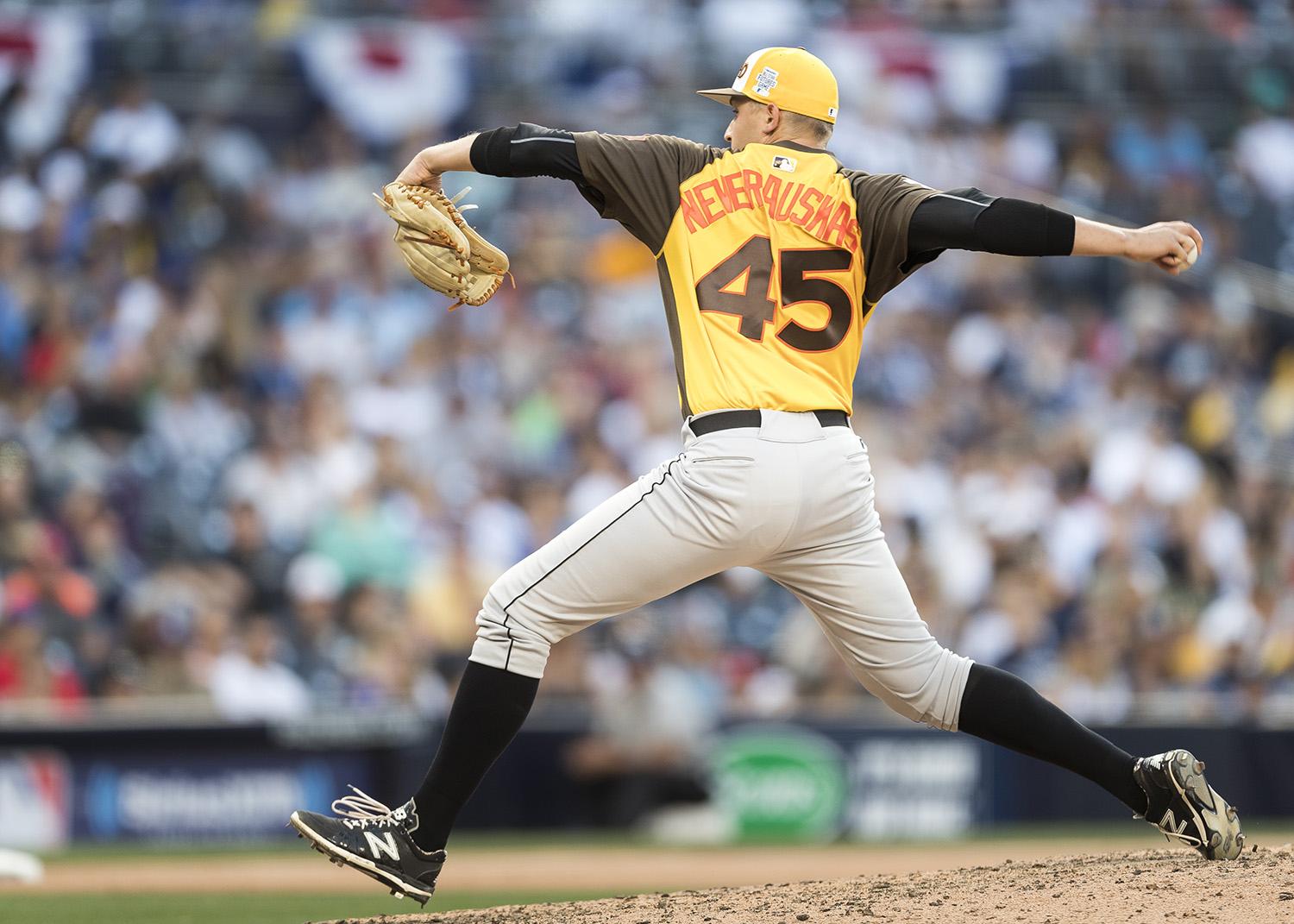 Pittsburgh Pirates prospect Dovydas Neverauskas pitches in the 2016 MLB All-Star Futures Game for Team World at Petco Park on July 10, 2016. He represented his native country by sporting a Lithuania flag patch on his sleeve. (Jean Fruth / National Baseball Hall of Fame and Museum)

“I thought about where I’ve come from, what I’ve been through, all the struggles of the minor leagues for almost nine years,” Ngoepe said. “And finally to be here and get a base hit.”

Ngoepe’s debut happened to come right on the coattails of another historic night, the first big league appearance for Pirates relief pitcher Dovydas Neverauskas. Neverauskas is the first major league player born in Lithuania, where he says he grew up playing baseball on rocky soccer fields.

A native of Vilnius, Lithuania, he was called up from the Triple-A Indianapolis on April 24. Neverauskas pitched two innings of relief that night against the Cubs, allowing two hits and one run. With the arrival of Ngoepe, Neverauskas was moved back to the Indians to make room on the roster for his former teammate. But as one of the Pirates top relief pitching prospects, Neverauskas is excited for the journey ahead.

“[I want] better opportunities to see that baseball can be played in Lithuania,” he said to the Pittsburgh Post-Gazette. “Somebody can follow in my footsteps.”

Whether Neverauskas makes it back to the show or not, now both players are preserved in Cooperstown, after each donated a game-worn cap from their major league debut to the Hall of Fame.

“We collect a variety of baseball stories here at the Hall of Fame,” said assistant curator Gabrielle Augustine. “The additions of Neverauskas’ and Ngoepe’s Pirates caps to the collection is a symbol of their groundbreaking achievements. They represent baseball’s growth and the idea that it is becoming a worldwide sport.”

Ngoepe’s hope is that his own achievement will serve as an example that young ballplayers all over the world can look to, when they are deciding whether or not to pursue a career in baseball. 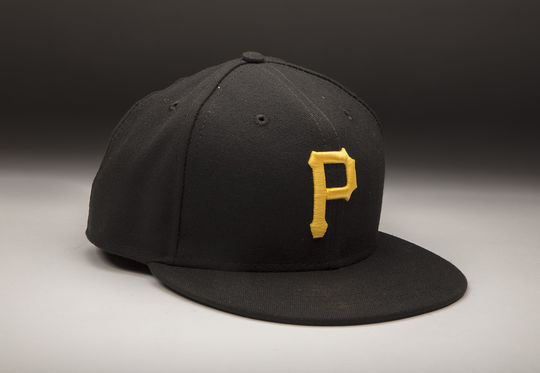 Gift Ngoepe wore this Pirates cap when he made his major league debut on April 26, 2017. PASTIME (Milo Stewart Jr. / National Baseball Hall of Fame and Museum) 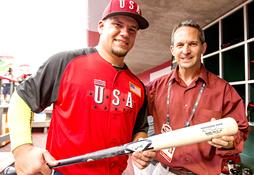 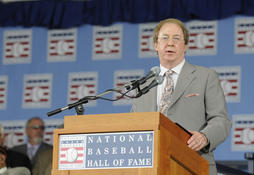 In the last few months, Spink winner Bill Madden has delivered portions of his materials to Cooperstown, with several more shipments to come. 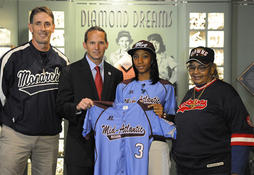