Kyle Schwarber realized his big league dreams when he debuted for the Chicago Cubs on June 16.

Less than a month later, Schwarber has a place in the Hall of Fame -- thanks to his performance in Sunday's Futures Game in Cincinnati.

Schwarber's two-run triple in the third inning powered the United States team to a 10-1 win over the World team and earned him the game's Most Valuable Player honors. Following the game, Schwarber donated the bat he used to the Hall of Fame.

"It's going to be awesome that I'm going to be part of (the Hall of Fame)," said Schwarber, a 22-year-old catcher who has spent most of the season with the Cubs' Double-A and Triple-A teams. "I've been (to Cooperstown) plenty of times since I was a little kid, playing in the tournaments up there. Then I went back when I went to the Cape Cod League. It's a special place."

And now, Cooperstown will feature one of Schwarber's bats as one of the 40,000-plus artifacts in the Museum's collection. Hall of Fame President Jeff Idelson accepted the bat from Schwarber and quickly sent it to the home of baseball in Central New York. It will soon be on display in the Museum's Today's Game exhibit.

"I was like, 'Really? All right, no problem!' when (Idelson) asked me," Schwarber said. "I've got plenty more bats.

Schwarber's bat joins other Future Games bats at the Hall of Fame such as Alfonso Soriano's from 1999, Jose Reyes' from 2002 and Joey Gallo's from 2014. All were Futures Games MVPs.

"It's going to be awesome to have a part of me in there," Schwarber said. "Hopefully one day if i'm blessed to have a long career, (I'll) be in there with a plaque. I'm going to keep working towards that goal." 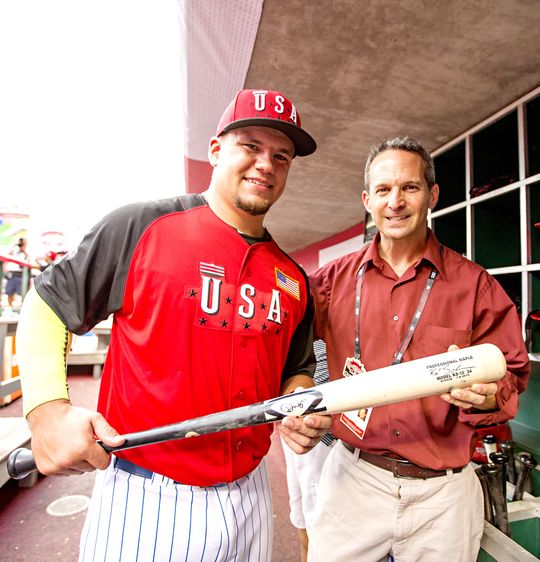