Nick Cafardo unexpectedly passed away early this year, but his life’s work as a distinguished baseball writer for more than three decades will be immortalized this summer with one of the greatest honors his profession bestows.

On Tuesday, Dec. 10, during the Winter Meetings in San Diego, Cafardo was elected the 2020 winner of the J.G. Taylor Spink Award in balloting by the Baseball Writers’ Association of America, an honor presented annually to a sportswriter “for meritorious contributions to baseball writing.” 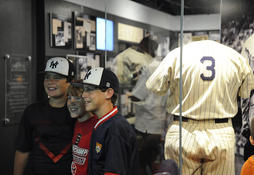 The longtime scribe, who made a name for himself with the Boston Globe, will be recognized during the National Baseball Hall of Fame and Museum’s 2020 Induction Weekend, to be held July 24-27. The annual Awards Presentation will be held on Saturday, July 25, at Doubleday Field.

“Nick just loved baseball,” said Dan Shaughnessy, the 2016 Spink Award honoree and a longtime Boston Globe colleague of Cafardo. “He was an everyday guy. He was always at the park. He was most comfortable at the park. When we lost him in February, that was his day off, but he was there anyway because he was picking up some Sunday notes stuff.”

A Massachusetts native, Cafardo graduated from Suffolk University in Boston before embarking on a sportswriting career that included stops at the Brockton Enterprise and the Quincy Patriot-Ledger before landing with the Boston Globe in 1989.

Considered one of Boston’s most accomplished reporters, his Red Sox coverage included World Series crowns in 2004, 2007, 2013 and 2018, while his Sunday baseball notes column, originated by 2004 Spink Award winner Peter Gammons, continued to be a fan favorite. 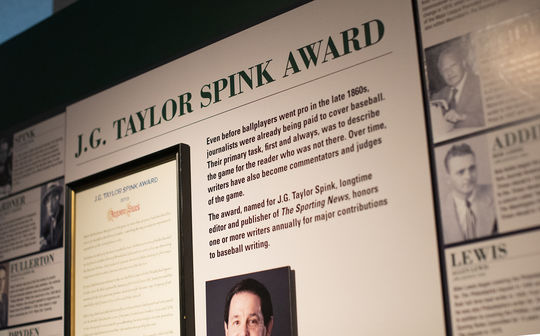 “He did a terrific job with the Sunday notes column,” Gammons said. “It’s a great thing that the paper has always understood that no matter how certain things in the business changes, the importance of those Sunday columns never changes. Its place in New England baseball is part of our culture.”

Cafardo’s baseball books include “If These Walls Could Talk’’ with Jerry Remy, “Inside Pitch: Playing and Broadcasting the Game I Love,’’ with baseball Hall of Famer Tom Glavine and “100 Things Red Sox Fans Should Know & Do Before They Die.”

“I remember when the Red Sox won the World Series in 2018, we were in Los Angeles for Game 3, that seven-hour, 18-inning game,” Shaugnessy recalled. “We were in the front row. It was Nick, Pete Abraham (another Globe baseball writer) and myself, in that order, left to right. It was a long game and we’re blowing deadlines and I think it was after the 17th inning and there’s a lot of exasperated writers, but Nick just said, ‘Isn’t this the greatest? Isn’t this great that we’re still playing?’ That showed to me how much he loved it.”

In the BBWAA meeting room when it was announced that Cafardo had captured the Spink Award was his 36-year-old son Ben, a communications director at ESPN.

“I’m thrilled. The entire family is bursting with pride and joy,” said Ben Cafardo in a phone interview a few hours after the announcement was made. “It’s been a challenging year but it makes a day like this all that much more special.

“Jack O’Connell (secretary-treasurer of the BBWAA) had given me a heads up about an hour prior and encouraged me to come to the BBWAA meeting. I was in the room when they made the announcement and it was a really remarkable moment. A standing ovation. I’m so proud of my dad – I always have been – but more than ever today. As a lifelong baseball fanatic and someone that was close to it on a number of fronts given my father’s career, I deeply value the significance of what it means to be recognized.” 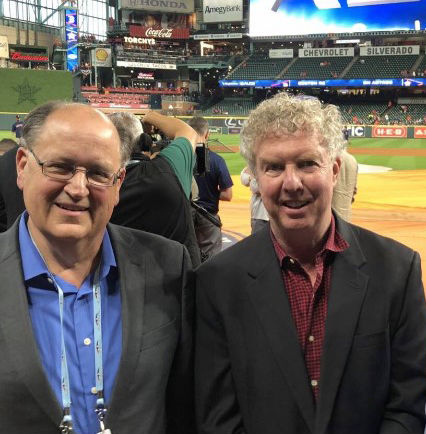 “He loved Cooperstown. It was such an annual pilgrimage for him,” Shaugnessy said. “And he shared a house with a number of other writers. When I came as a columnist to the Boston Globe I loved the Hall of Fame, too, but I rarely covered it because Nick had that. Basically it was Nick’s baby because he deserved it and he wanted to be there. When I won the Spink Award in 2016 it was cool that Nick was out there writing it up.”

For going on a decade, many other friends shared that Cooperstown rental on Susquehanna Ave. with Cafardo, including writers Scott Miller of Bleacher Report, Kevin Kernan from the New York Post, and USA Today’s Bob Nightengale.

“Nick loved every minute of being in Cooperstown,” Kernan said. “Even though he was a national writer who had to worry about the trade deadline, and what many writers use as an excuse about why they can’t come to Cooperstown, Nick always went. He just loved the ambiance. We used to get up early in the morning and get coffee, then sit around and chat before things got busy. 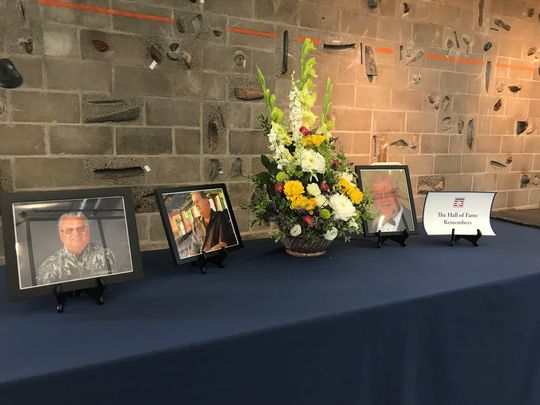 A memorial to Nick Cafardo, in the media room during the 2019 Hall of Fame Weekend. (National Baseball Hall of Fame and Museum)

“It’s been a hard year for everybody,” Shaugnessy said. “Poor Pete (Abraham) was sitting next to flowers all year in the press box. That started the next day when we got to the ballpark on Feb. 22 and the Red Sox had put flowers out. That just broke me up. Throughout the year we’d go to other cities and see the same thing. It was just an amazing outpouring, just how loved this guy was.”

“There’s been a lot of worthy names on those Spink Award ballots, but none more than Nick Cafardo,” said Shaugnessy, who added that his friendship with Cafardo dated back to the late 1970s. “There was a stretch where Gammons, Whiteside, myself and Nick were all on the Globe staff at the same time. I think the Globe should be pretty proud of that. We’re a baseball paper, a baseball town, and Nick was a baseball man through and through.

“The paper as an entity is very fired up for Nick. It’s a Red Sox/Yankees weekend but someone else will have to cover those games because we’re going to be in Cooperstown.”

In the Spink Award balloting, Cafardo captured 243 votes of the 427 cast by BBWAA members. Jim Reeves, who had a 40-year career with the Fort Worth Star-Telegram, received 108 votes, while Patrick Reusse, who has been writing about baseball in Minnesota for more than four decades, got 76 votes.