Left field at Fenway Park was once the home to Hall of Famers Ted Williams, Carl Yastrzemski and Jim Rice. But on August 14, 2014, that hallowed ground was reserved for Pete Frates and his family.

A social media phenomenon, the Ice Bucket Challenge raised more than $220 million globally for the ALS Association in its fight to find treatments and a cure for the disease during a six-week period in 2014.

Thousands of individuals and organizations took park, including the Hall of Fame – which held a staff Ice Bucket Challenge on the steps on the Museum in Cooperstown on Aug. 28, 2014. 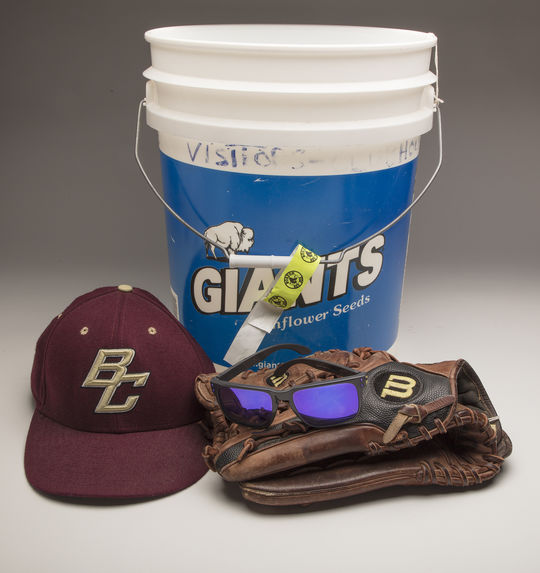 Pete Frates donated a cap and glove from his playing days at Boston College and the ice bucket and sunglasses he used for his Ice Bucket Challenge at Fenway Park in 2014. (Milo Stewart Jr. / National Baseball Hall of Fame and Museum)

Today, symbols of that event – and the ballplayer who propelled a global philanthropic phenomenon – are a part of the collection at the National Baseball Hall of Fame and Museum, including a cap and glove from his playing days at Boston College and the ice bucket and sunglasses he used at Fenway Park in 2014.

In 2012, Frates was diagnosed with ALS. He had helped popularize the Ice Bucket Challenge on social media earlier in 2014, but this was his first time doing the challenge. Partaking in an event that he helped sweep the nation that summer – and to do it at Fenway Park – was a dream for the lifelong baseball fan and player.

“We’re a baseball family. Baseball has always been our sport. Our entire lives revolve around it,” Pete’s father John Frates said.

Since 1939, baseball and ALS have been connected in history. Gehrig was forced to retire from baseball when he was just 37 due to ALS, passing away two years later. Another Hall of Famer, Catfish Hunter, also died of the disease in 1999. Frates had to step away from the game of baseball when he learned of his diagnosis, but the game never left him. 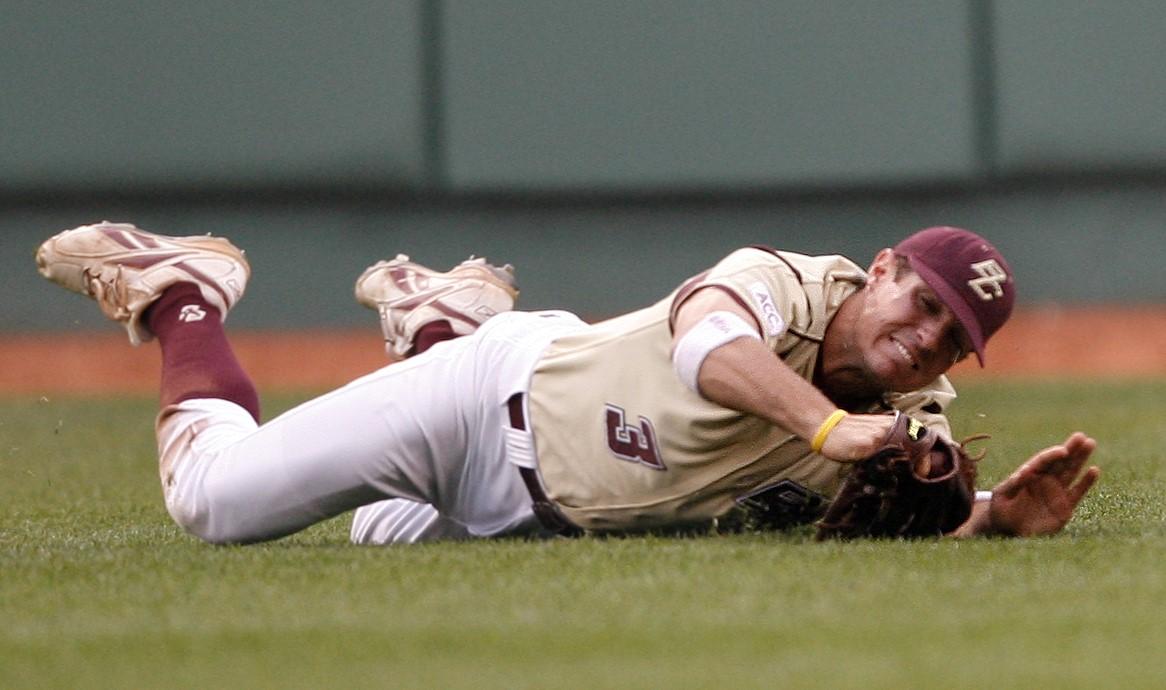 Pete Frates makes a diving catch while playing for Boston College’s baseball team on April 26, 2006. The glove he used is now preserved at the Hall of Fame. (Matthew J. Lee / Boston Globe)

Born into a family faithful to the Red Sox, Frates grew up with an immense love for baseball and eventually played professionally in Germany. Once he was diagnosed, the baseball world poured out support for him.

“There’s so much love from the baseball community. We hear frequently from the Commissioner, and of course there’s the special relationship with the Red Sox. Colleges have embraced our banding together wristbands, and we’ve even gotten support from high school teams and little leagues around the country,” John Frates said.

Frates’ dedication to ALS research has woven him into baseball’s fabric forever. As such, the Hall of Fame recently asked to tell the story through artifacts – and Frates generously donated a glove and cap from his playing days at Boston College, along with the bucket used to douse him with ice water at Fenway Park, and the sunglasses he wore for the event. 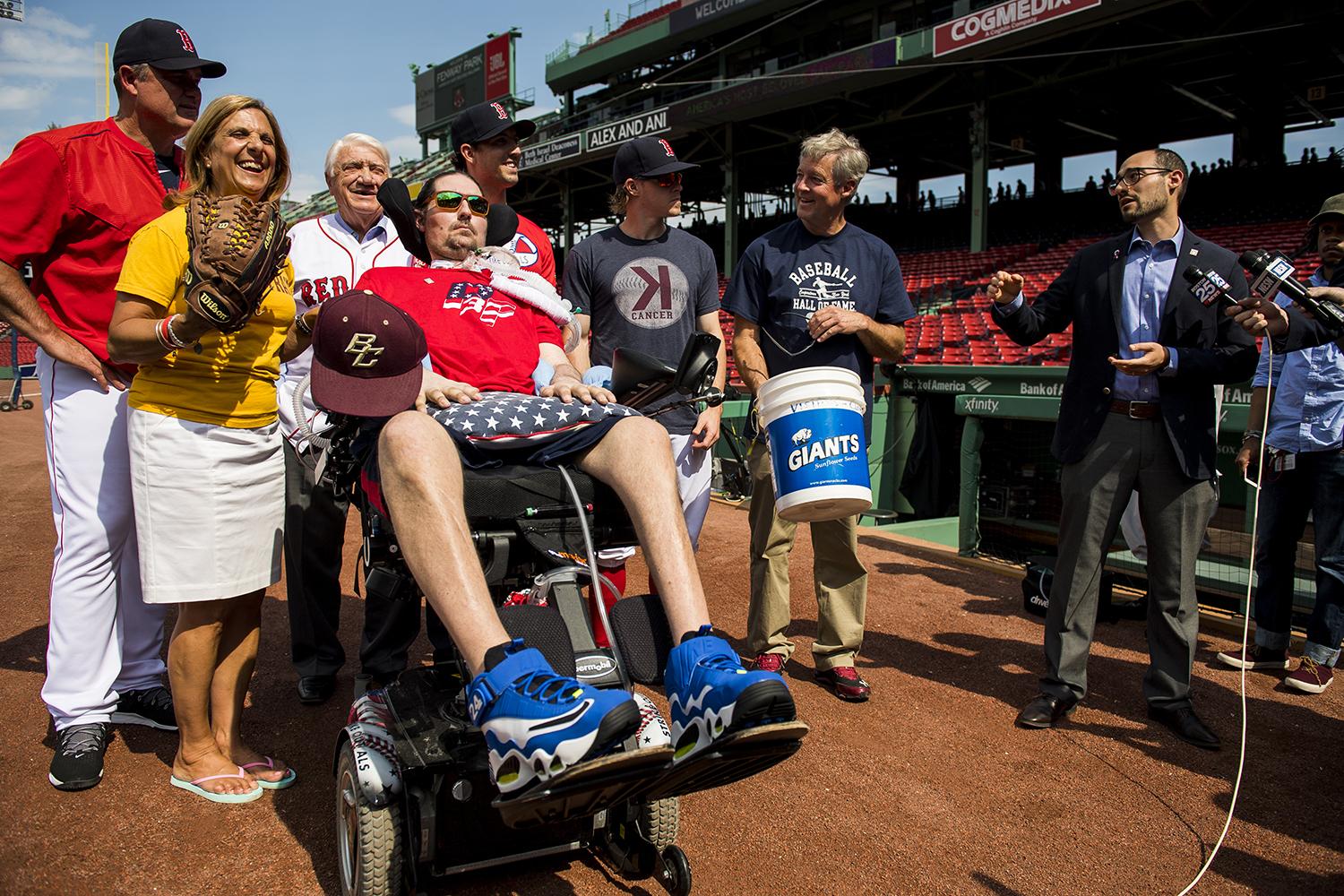 “We decided to reach out to see if we could help tell Pete’s story. Our institution is designed to talk about the National Pastime. This is part of our National Pastime.” Museum Curator Tom Shieber said.

The love baseball fans and teams have shown Frates was also seen at Gehrig’s speech in 1939, where Gehrig received an outpouring of support from not only Yankee fans, but also from the entire country.

Leaning on the game for support is now a common occurrence for the Frates family.

“This disease tries to destroy relationships,” John Frates said. “Pete burst into tears when he was told about his stuff was going to the Hall. And he has not cried tears of joy in years.

"It was so beautiful for us to see.” 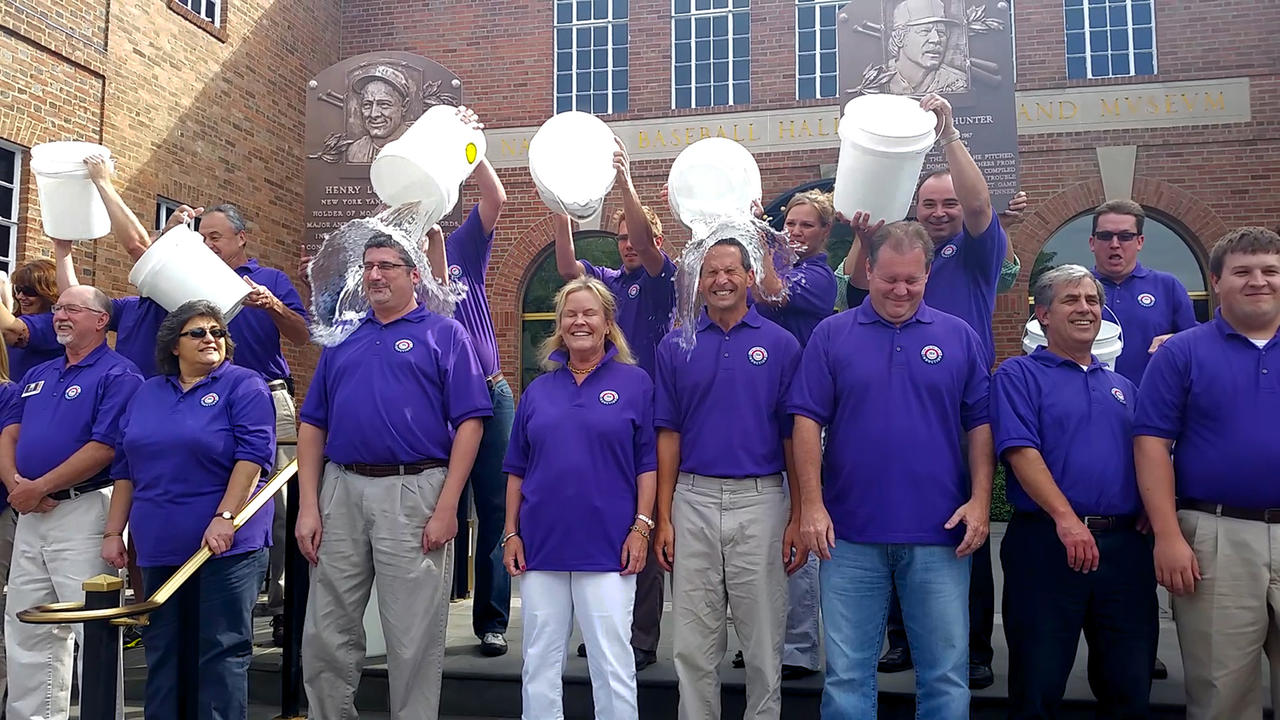 “When the cure comes, it’ll be because of baseball and Pete Frates.”