Part of the BASEBALL HISTORY series
Written by: John Erardi

Take it from a man who laundered six home versions of them – and an untold number of visiting ones – there is nothing quite like a retired jersey number.

He's right, of course. Election to the National Baseball Hall of Fame is baseball's highest honor, but it is largely determined by the worthiness of the honoree's numbers.

But the number – singular – is where honor goes to hang in forever glory in the honoree's home ballpark.

Irvin’s “20” is baseball’s most frequently retired number at 11 times. Baltimore’s Frank Robinson was first (Spring Training 1972) – barely beating out Pittsburgh’s Pie Traynor (Opening Day, 1972) – and also the most recent (2017, Cleveland, where he was baseball’s first African-American manager). In between, Robinson’s number was retired in 1998 (Cincinnati).

Back in the day, Willie Mays would order – by the bushel-load – the most famous No. 24 jersey of them all, and trade them for the No. 24 uniforms of visiting players, even offering to buy the number right off their backs for $1,000 apiece.

Mays inspired at least two generations of young ballplayers, especially those who fancied themselves as center fielders, to wear the double dozen. Ken Griffey Jr. is the "24" today's players often emulate. The tradition lives on.

“Somewhere, Willie has a closet full of those 24s,” said Murphy, chuckling at the memory.

“Players like their numbers,” he added. “You (used to) see players wear the numbers on a chain around their neck, fans with the numbers on their back. There's just something about baseball numbers. The number becomes who that player is to the fans and is forever associated with him.” 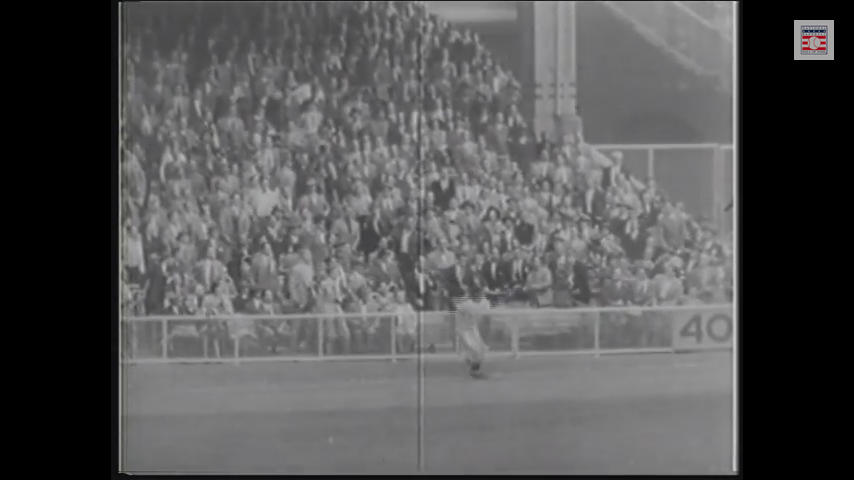 Most baseball fans know that the first baseball number retired was Lou Gehrig's No. 4, on July 4, 1939, the day of his famous “luckiest man on the face of this earth” speech. But only the seam-iest of seamheads know – heck, not even many Cincinnati Reds fans know – that the second baseball number retired was that of former Reds catcher Willard Hershberger, who committed suicide during the Reds’ World Championship season of 1940. His No. 5 has since been overshadowed by the one worn by legendary catcher Johnny Bench.

So revered and evocative are retired numbers that the National Baseball Hall of Fame often makes them the centerpiece of their displays. There may be, arguably, no more iconic non-action baseball “number” photo than the Bambino in No. 3 leaning on his bat at Babe Ruth Day at Yankee Stadium in 1948 on the day the Yankees retired his number. The Hall has that No. 3, two Gehrig No. 4’s (both from the 1939 season), a DiMaggio-delivered No. 5 in 1952 and a Mickey Mantle No. 7 that was donated to the Hall after his final season in 1968. 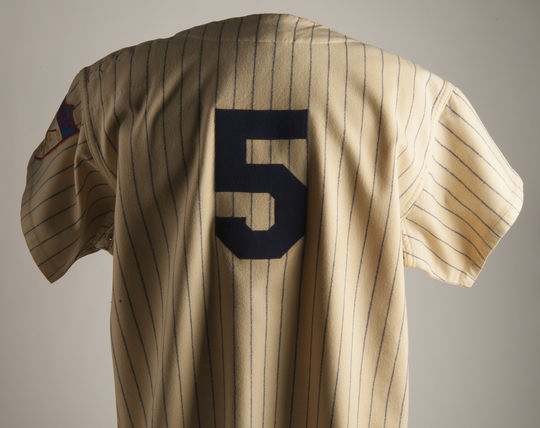 Joe DiMaggio presented this jersey, which he wore during the 1951 season, to the Hall of Fame when his No. 5 was retired on April 18, 1952. (Milo Stewart Jr./National Baseball Hall of Fame and Museum)

“The uniform collecting market has long been driven by the Yankees,” said Dave Grob, a uniform authenticator born and bred in Cincinnati who has quite a collection himself. “The Mount Rushmore would be Ruth, Gehrig, DiMaggio and Mantle.”

With the Yankees’ retirement of No. 2 (Derek Jeter, 2020 Hall inductee), the Bronx Bombers have now retired all of their single-digit numbers plus Phil Rizzuto at 10. The others are: 1, Billy Martin; 6, Joe Torre; 8, Bill Dickey and Yogi Berra; and 9, Roger Maris.

Uniform numbers were introduced on a regular basis in 1929 and, at first, marked the wearer’s spot in the batting order (thus Ruth 3 and Gehrig 4). The numbers were meant for people in the ballpark, not fans at home.

As newspapers began carrying more photos in the 1950s and TVs began proliferating, fans everywhere began absorbing the numbers almost by osmosis. By the 1960s into the 1970s, they’d become second nature – actually first nature to schoolboys and yes, schoolgirls.

Grob remembers the hold that Reds jersey numbers had on him and his friends playing Knothole baseball in Cincinnati in 1972.

“When we got our uniforms that year, we only got the pants, caps, and stirrup socks because the jerseys were still being sewn for the sponsor, Thomas Funeral home.”

The coach told the players, “For the first game, just put a number on a white t-shirt.”

For that first Saturday, five of the nine players showed up in No. 14 (Pete Rose) and four in No. 5 (Johnny Bench), Grob recalled. 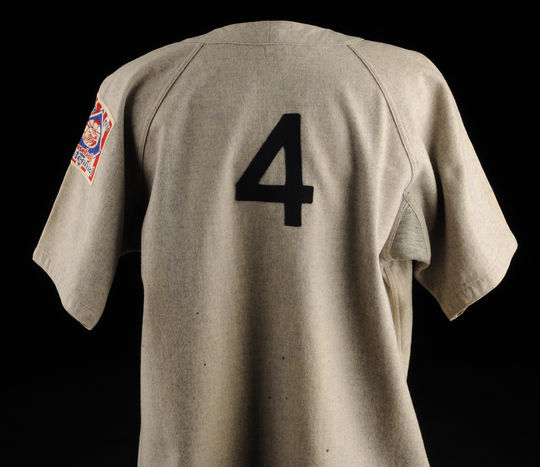 Lou Gehrig’s No. 4 was the first jersey number retired by a big league team. Gehrig wore this jersey during his final season of 1939. (Milo Stewart Jr./National Baseball Hall of Fame and Museum) 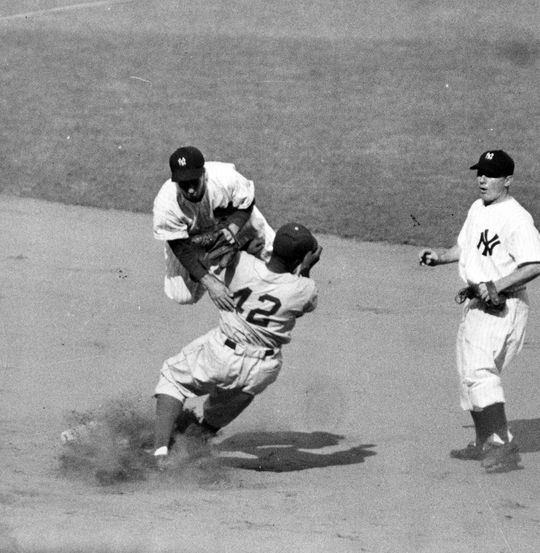 Jackie Robinson’s No. 42 was retired throughout baseball in 1997. The Yankees and Cardinals also have retired No. 42 in honor of Hall of Famers Mariano Rivera and Bruce Sutter, respectively. (National Baseball Hall of Fame and Museum)

The retired-number craze didn’t kick in big-time until the 1970s. From 1939 through 1970, 31 years, only 19 MLB numbers were retired. There are now more than 200 retired numbers, not counting executives, broadcasters and “The Fans” (Cleveland Indians).

Sometimes it really is all about the numbers.

John Erardi is a freelance writer from Crescent Springs, Ky. 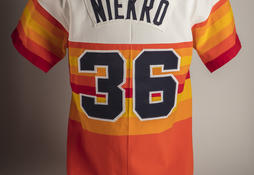 The 1970s saw a seismic shift in MLB uniform designs.