The 40th anniversary of one of the greatest moments in the history of postseason baseball took place on October 14, 2015. Can you name the ballplayer who delivered a massive blow to win a classic contest during the 1975 World Series? If you answered “Carlton Fisk,” you’re off by a week, as Pudge’s 12th-inning walk-off homer to end Game Six of the Fall Classic took place on October 21. The correct response is Kurt Bevacqua.

The Topps Chewing Gum Incorporated – the folks best known for packaging their Bazooka bubble gum with baseball trading cards – announced the “Joe Garagiola Bazooka Big League Bubble Gum Blowing Championship” on August 4, 1975. The contest began soon thereafter, with each major league club staging its own competition to determine their representative for the elimination tournament. Each club, that is, except for the Tigers and Pirates. According to a Topps spokesperson, “At the time they turned us down, both Pittsburgh and Detroit were in pretty bad losing streaks.”

A sticky situation came up during the Cubs competition when George Mitterwald filed an official protest. The Cubs catcher claimed he had blown the largest bubble, but that the contest’s judge (Public Relations Director Chuck Shriver) failed to position the official calipers in time. Ultimately, 1975 batting champion Bill Madlock was crowned the club’s top bubble blower.

In Cleveland, Eric Raich blew an 18¼-inch bubble to take the Indians’ title, but just days later was sent to the club’s Triple-A affiliate in Oklahoma City. “It took a lot of concentration,” remarked the 23-year-old pitcher. “Maybe I’ll be Rookie of the Year in bubble gum blowing.” 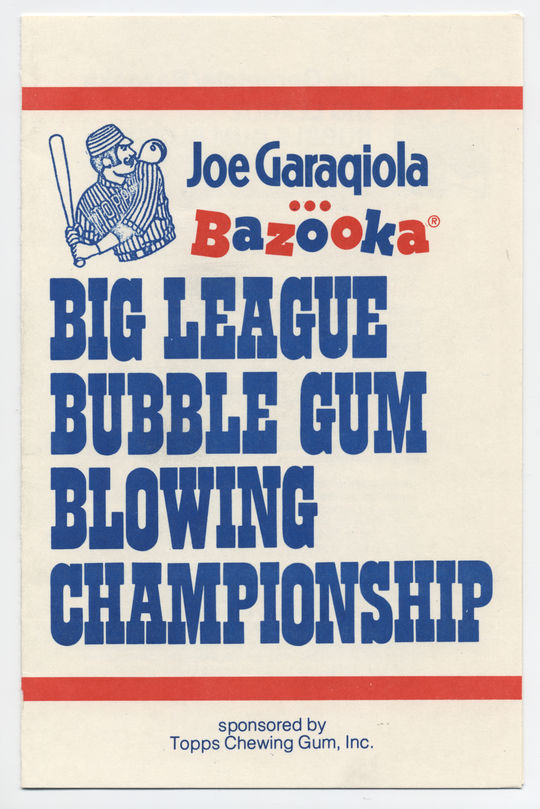 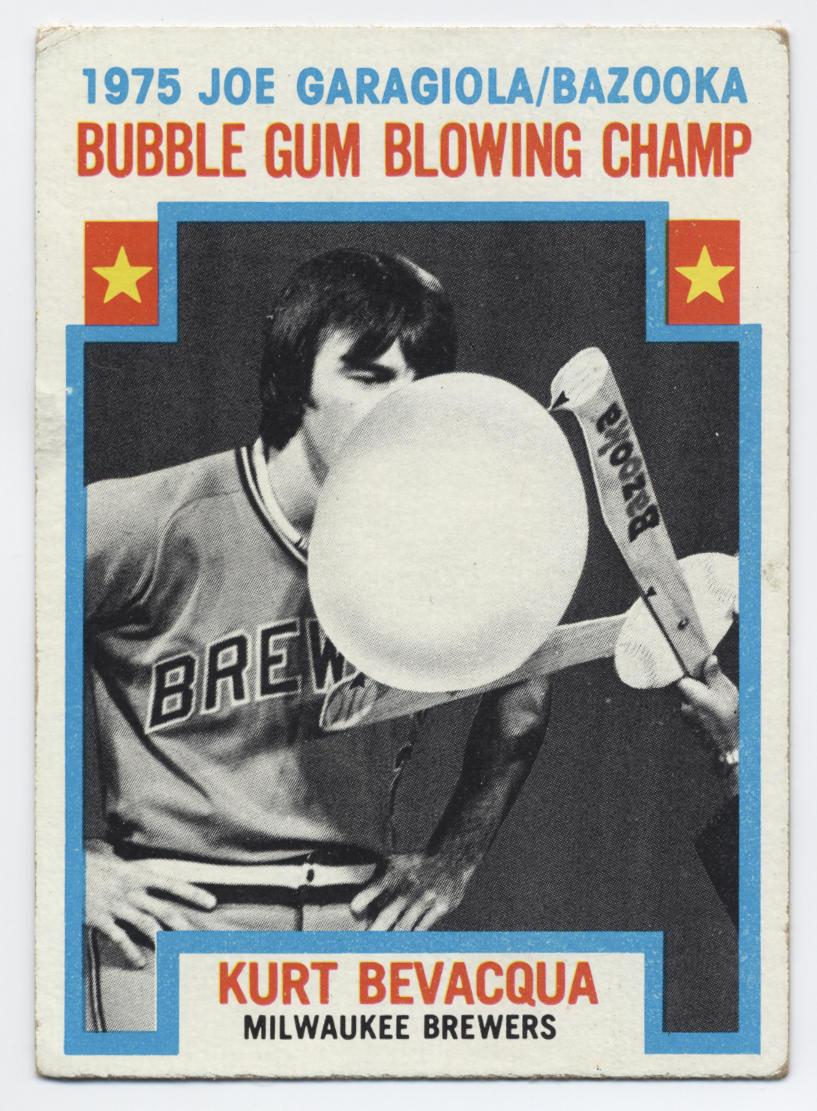 During a series against the White Sox in Chicago, Kansas City Royals champion George Brett announced his intentions: “I want to go all the way in this thing. I’ve taken a lot of gum with me on this road trip, and I practice more than an hour a day in my room.”

After weeks of two- and three-player “blow-offs,” a pair of league champions emerged: Johnny Oates of the Philadelphia Phillies and Kurt Bevacqua of the Milwaukee Brewers. Oates reached the championship by bursting the bubbles of fellow National Leaguers Rick Rhoden, Mike Cosgrove, and Gary Carter, while Bevacqua blew his way to the American League title by topping Raich, Mickey Scott, and Walt Williams.

The two combatants faced one another in a pressure-filled finale that aired just before Game Three of the World Series in Cincinnati. Garagiola emceed the event, while Dick Stello, assigned to umpire first base that night, acted as the official judge. In a pregame interview, Bevacqua was asked if his life had changed since he became NL champion. The Brewers infielder quipped “Maybe a little bit. I feel like an old Western gunfighter now. Every six-year old kid in the United States is writing letters to challenge me." When Oates was asked if he was surprised he got to the finals, he replied “The only thing I wanted was a chance. And Philadelphia gave me the gum to give me the chance and here I am.”

Ultimately, Bevacqua won the championship with an 18¼-inch bubble. Beyond being recognized as the bubble gum blowing king, Bevacqua won $1,000 for himself, $1,000 for a charity of his choice, and a full case of Bazooka bubble gum. And now, 40 years after his achievement, a copy of the official rules of the contest along with a 1976 Topps baseball card honoring his championship will be a part of the Hall of Fame’s new exhibit about baseball from the 1970s through today: Whole New Ballgame. 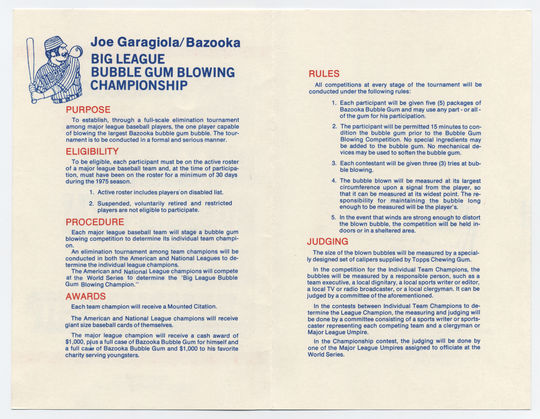