For four years, the professional baseball world got to experience something that it had rarely seen before: A woman on the diamond.

Borders made her historic debut on Feb. 15, 1994 when she became the first woman to pitch in a men’s college baseball game. She pitched a five-hitter for Southern California College against the Claremont-Mudd-Scripps in a 12-1 victory. 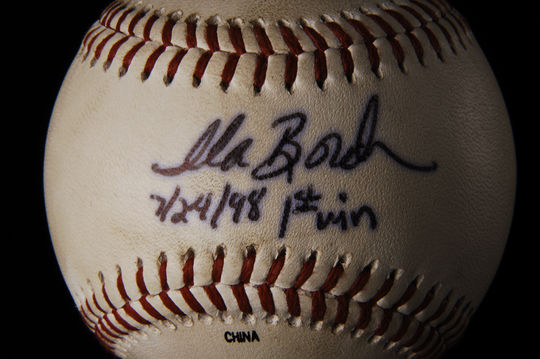 Ila Borders threw this baseball in a July 24, 1998, game between the Duluth Dukes and the Sioux Falls Canaries when she recorded her first victory in pro baseball. (Milo Stewart Jr./National Baseball Hall of Fame and Museum)

Borders went on to make her professional debut, as a relief pitcher, on May 31, 1997 with the St. Paul Saints of the Independent Northern League. Playing against the Sioux Falls Canaries, she faced three batters and gave up three runs. She made her first professional start on July 9, 1998. She went five innings and recorded a loss. However, 15 days later, on July 24, Borders recorded her first win as a profession baseball player. In six innings, she gave up just three hits and two walks with two strikeouts.

She retired in 2000 to pursue a career in firefighting and in 2003 she was elected to the Baseball Reliquary Shrine of the Eternals for her unique contributions to the game of baseball. She had a passion for the game, saying once to Larry Oakes of the Minneapolis Star Tribune, “Every Saturday and Sunday, from the time I was 5, my whole family would play ball…my dad basically taught me everything: The mental part, the control, how to call a game, how to take care of my arm.”

She also knew what it took, on the inside, to play the game, saying to Yvette Lanier of the Denver Post, “You’re going to put in a lot more time and a lot more effort and hard work…you really need that mixture in order to make it beyond puberty. You need to have a strong, thick skin and you have to really want it. You have to really love the game.”

Cassidy Lent is the manager of reference services at the National Baseball Hall of Fame and Museum.