It’s one of the most famous lines in all of baseball cinema: “There’s no crying in baseball!”

The saying comes from A League of Their Own , the 1992 film known for shedding light on the All-American Girls Professional Baseball League. The movie celebrates the 24th anniversary of its release this month.

At this point in the film, Dugan believed women didn’t have the toughness to play baseball. However, two quotations from a recently digitized 1994 interview featuring five former AAGPBL players show these women were tougher and more durable than Dugan may have given them credit for, perhaps more so than the men who play today’s game.

“If you were hurt you played hurt. I broke my thumb one time and the doctor said, ‘You’re done for six weeks.’ Four nights later I was catching.” — Magdalen Redman 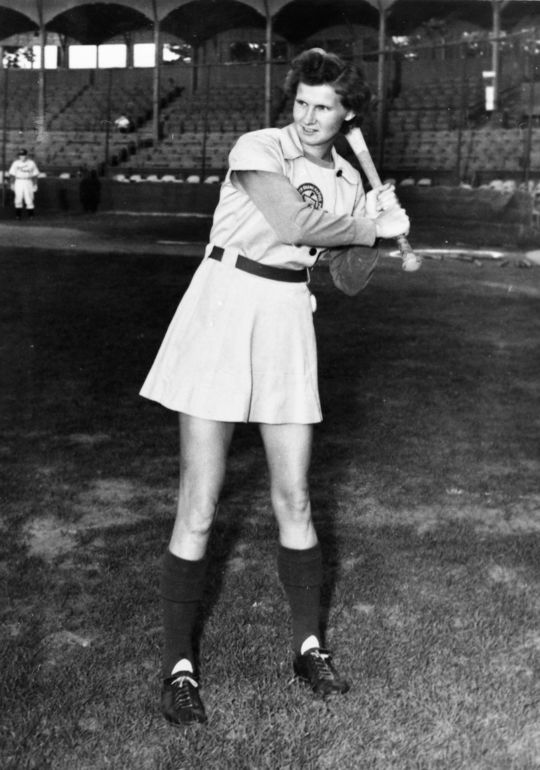 Connie Wisniewski, a Grand Rapids Chicks pitcher known as the “Iron Woman,” set the AAGPBL all-time record in 1946 for wins in a season with 33. She would also finish that season with an ERA of 0.96, after tossing 40 complete games. (National Baseball Hall of Fame)

In Major League Baseball, teams are allowed 25 players on the roster, meaning players can afford to miss time with injuries or fatigue simply because it isn’t an issue with regards to roster space. There are enough players on the roster for an adequate replacement player to be found. If the right replacement isn’t on the active roster, then teams can choose from an enormous pile of prospects to call up from the minor leagues. 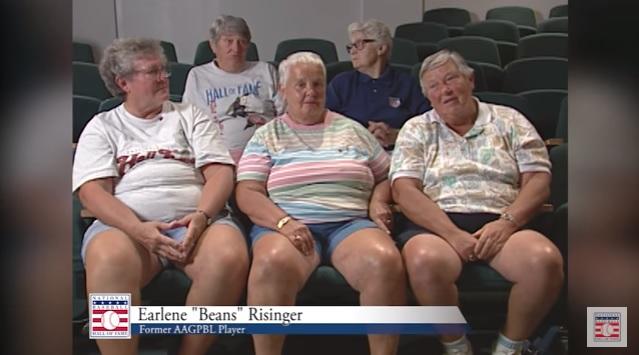 But in the AAGPBL, teams were allowed only 15 roster spots. If a woman like Magdalen Redman sustained an injury, she would be difficult to replace due to the lack of man(woman)power to choose from. Furthermore, the AAGPBL had no farm system, meaning Redman’s team, the Grand Rapids Chicks, had no pool of talent to pick from to replace her like modern teams do. Due to the lack of roster depth, Redman continued playing despite the broken thumb.

Based on teams’ delicate handling of pitchers in the modern game, it is difficult to wrap one’s mind around how durable pitchers of the late 19th and early 20th centuries were. The top starters regularly threw over 30 complete games, often pitched in to extra innings, and even did so on fewer days of rest between starts compared to today’s pitchers.

The experience of pitchers in the AAGPBL was no different.

“What gets me is these pitchers nowadays. If you get six innings out of them, they think you’re wonderful. But we had girls who pitched 19, 20 innings.” – Earlene Risinger

Connie Wisniewski, a Grand Rapids Chicks pitcher known as the “Iron Woman,” set the AAGPBL all-time record in 1946 for wins in a season with 33. She tossed 366 innings that year, 25 less than the year she threw before. In the record-setting ’46 season she also held a measly earned-run average of 0.96. 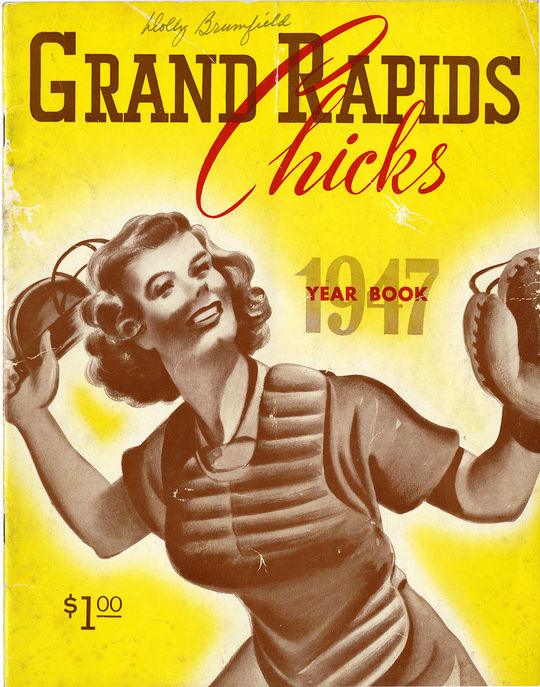 A team yearbook for the 1947 Grand Rapids Chicks, featured players like Connie Wisniewski. Magdalen Redman would join the Chicks from 1950-54. (National Baseball Hall of Fame) 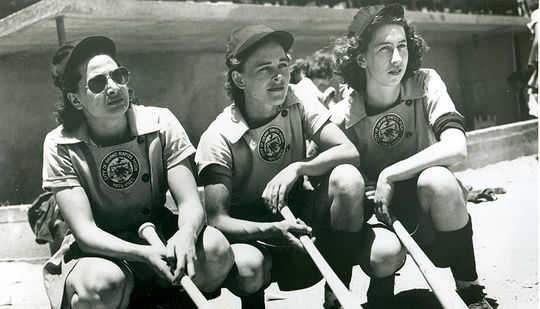 Three members of the Grand Rapids Chicks, who won championships in 1947 and 1953, posing outside of the dugout. (National Baseball Hall of Fame)

She threw 40 complete games that season.

To put this in perspective, Los Angeles Dodgers pitcher Clayton Kershaw, one of the top hurlers in today’s game, pitched 232.2 innings in 2015, throwing four complete games. 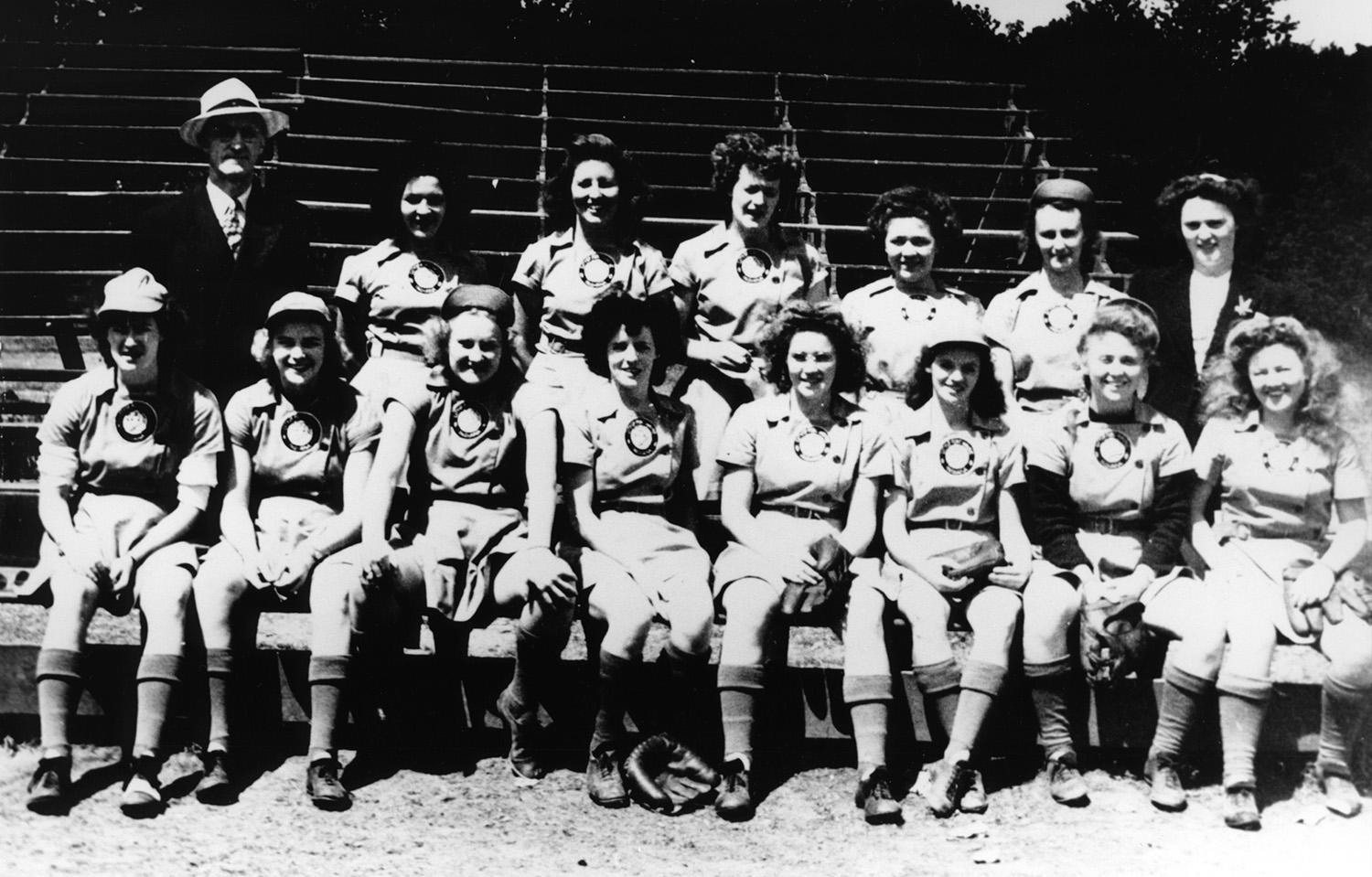 The Fort Wayne Daisies, pictured here in 1945, featured players like Vivian Kellogg and Audrey Haine. They played under manager Bill Wambsganss, a member of the 1920 world champion Cleveland Indians -- widely renowned for his unassisted triple play during the series. (National Baseball Hall of Fame)

Vivian Kellogg, a first basewoman for the Fort Wayne Daisies, also shared a story of one AAGPBL game where her teammate, Audrey Haine, had struggled with walking batters. Manager Bill Wambsganss – he of the World Series triple play in 1920 – visited the mound and said, “You put them on base, you can get them out.” Rather than remove her from the game, he let her find a way out of the jam herself.

Haine came back to pitch the next inning, according to Kellogg.

Had Jimmy Dugan known all of this, maybe he would have thought twice about his famous line.