In 1947, Jackie Robinson became the first African American to play in a modern big league game.

Merely 10 years earlier, how many of his classmates at John Muir Technical High School or Pasadena Junior College (now Pasadena City College) might have thought an 18-year-old Jack Robinson would be destined for greatness?

We may never know, but baseball researchers can now get a glimpse of Robinson in his high school and collegiate glory days through a recent donation to the Baseball Hall of Fame Library. Two copies of the Campus, from 1937 and 1938, feature Robinson as a member of the Pasadena Junior College’s varsity basketball and baseball squads. A 1935 copy of The Sequoian, from Muir Technical High School, reveals Robinson as a budding track athlete, perhaps following in the footsteps of his brother Mack, who would participate in the 1936 Berlin Olympic Games and earn a silver medal in the 200 meters.

“These yearbooks provide a unique view into the life and times of Jackie Robinson before he became as renowned as he would be,” said Jim Gates, Librarian at the Baseball Hall of Fame. “Though we sometimes read about the feats of Hall of Famers as youth, the stories are told far later in their lives. These yearbooks offer a contemporaneous account of Robinson’s successes as a student-athlete.” 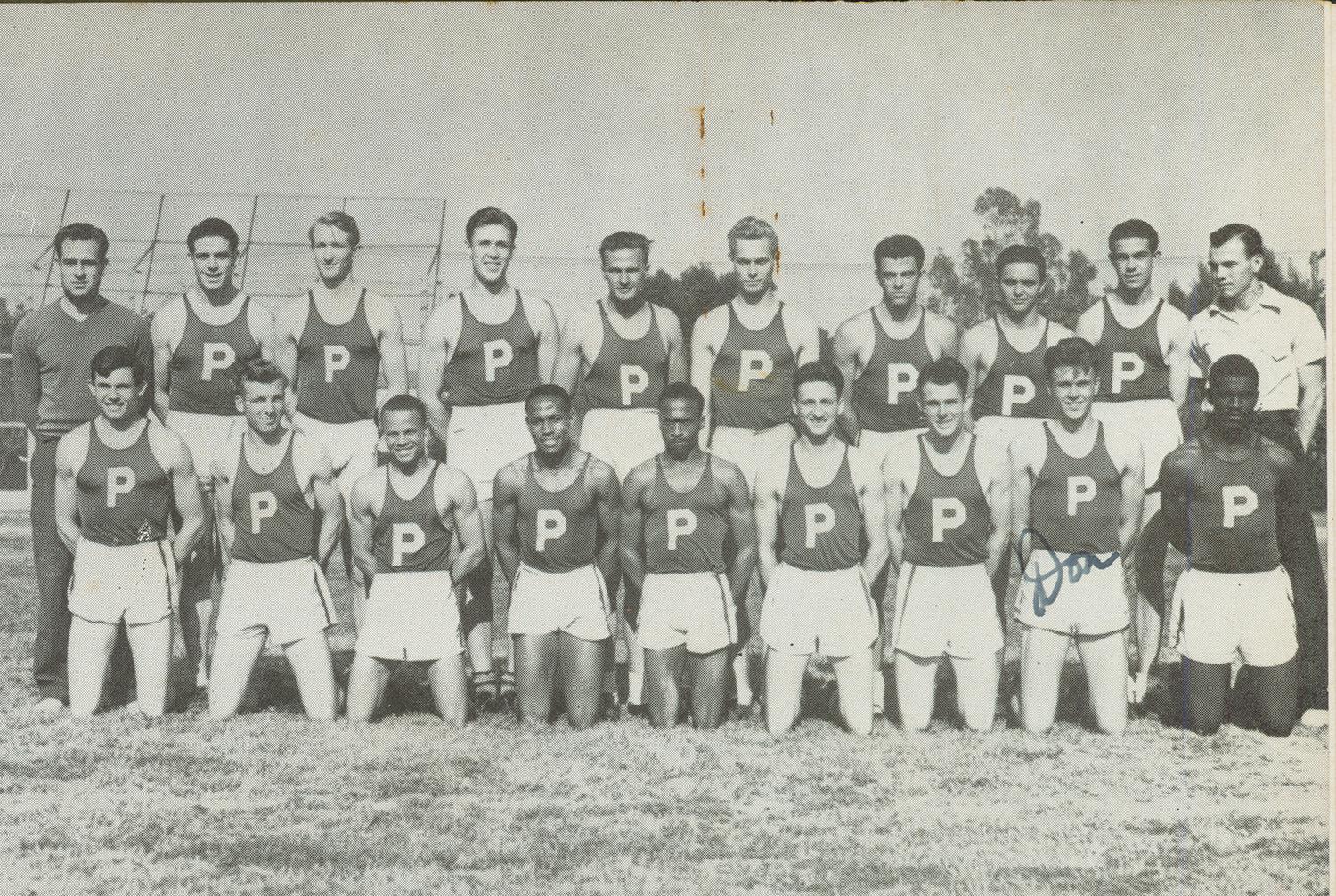 Jackie Robinson ran track for Pasadena Junior College from 1937-1938. He is pictured at the bottom row, far right. (National Baseball Hall of Fame and Museum)

Growing up on Pepper Street in Pasadena, just a long home run from what is now named Robinson Park and the Jackie Robinson Community Center, Robinson immersed himself in sports. As he recounted in his autobiography, I Never Had It Made:

“In grammar school some of my classmates would share their lunches with me if I played on their team. When I went to John Muir Technical High School I earned letters in football, basketball, baseball, and track. I enjoy competition and I was aggressive in my determination to win. Often I found myself singled out by the other players. They decided that I was the best man to beat. I enjoyed having that kind of reputation, but I was also very much aware of the importance of being a team man, not jeopardizing my team’s chances simply to get the spotlight.”

According to Robinson biographer Arnold Rampersad, Muir Tech provided “the backdrop for Jack’s first emergence as a star school athlete.” 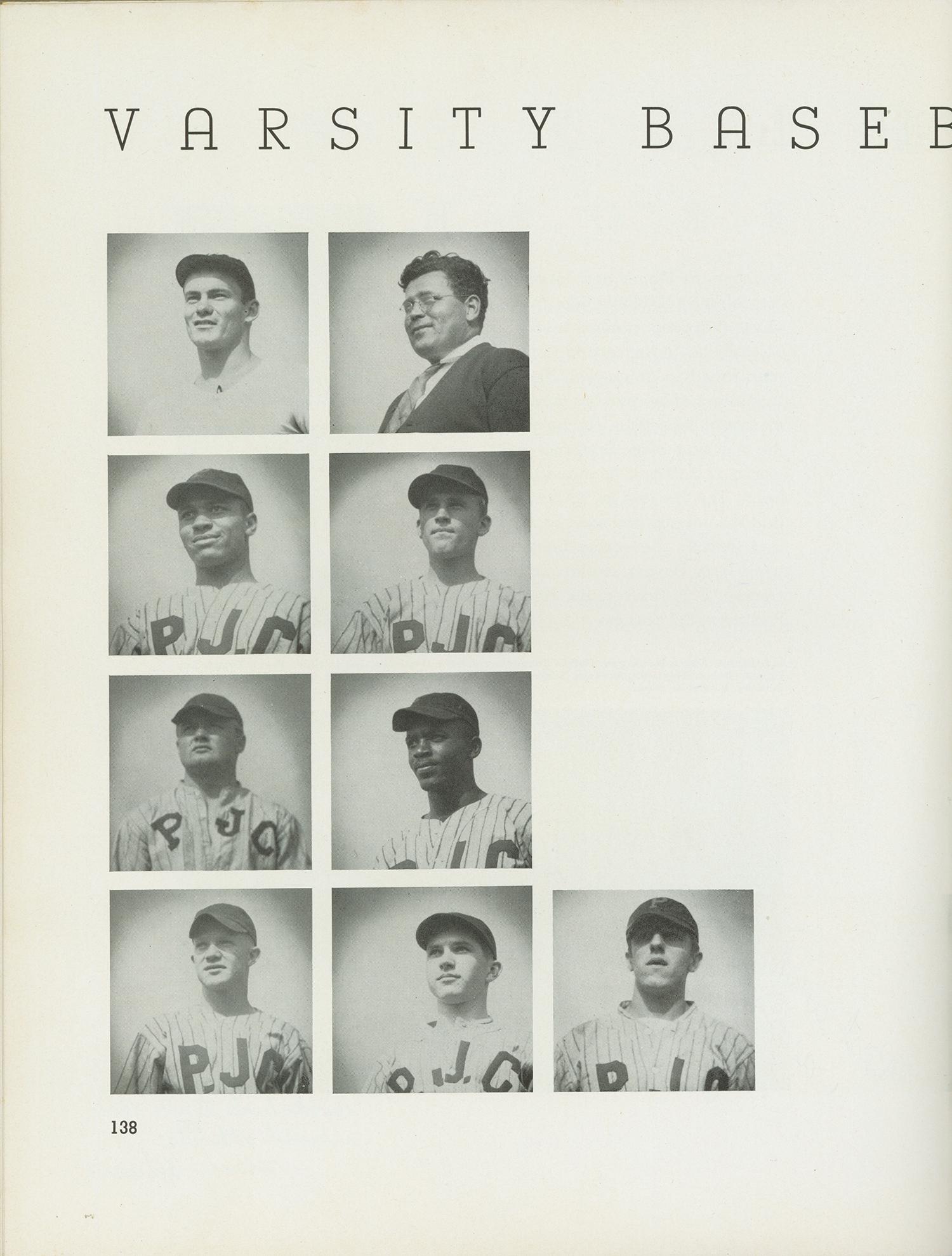 Jackie Robinson played shortstop for Pasadena Junior College from 1937-1938, 10 years before he broke the color barrier in Major League Baseball. He's pictured above in the middle vertical row, second from the bottom. (National Baseball Hall of Fame and Museum)

Indeed, Robinson is pictured in Muir Tech’s yearbook as a broad jumper and a high jumper on the lightweight track team, and a blurb about the team labels Robinson as one of several “impressive” athletes in local competitions.

Robinson, who also fielded the shortstop position for the school’s baseball team, was a member of an “exceptionally good” infield. In the annual Pomona baseball tournament, Robinson was well regarded for his play in leading Muir Tech to the finals.

But he was not just a star on the field of play – he had a singing voice to match. Robinson also participated in the boys’ glee club at Muir Tech.

The three yearbooks appear to have belonged to Daniel Arellanes, one of Robinson’s classmates at Muir Tech and Pasadena Junior College. Like Robinson, Arellanes was a student-athlete, excelling in multiple sports. 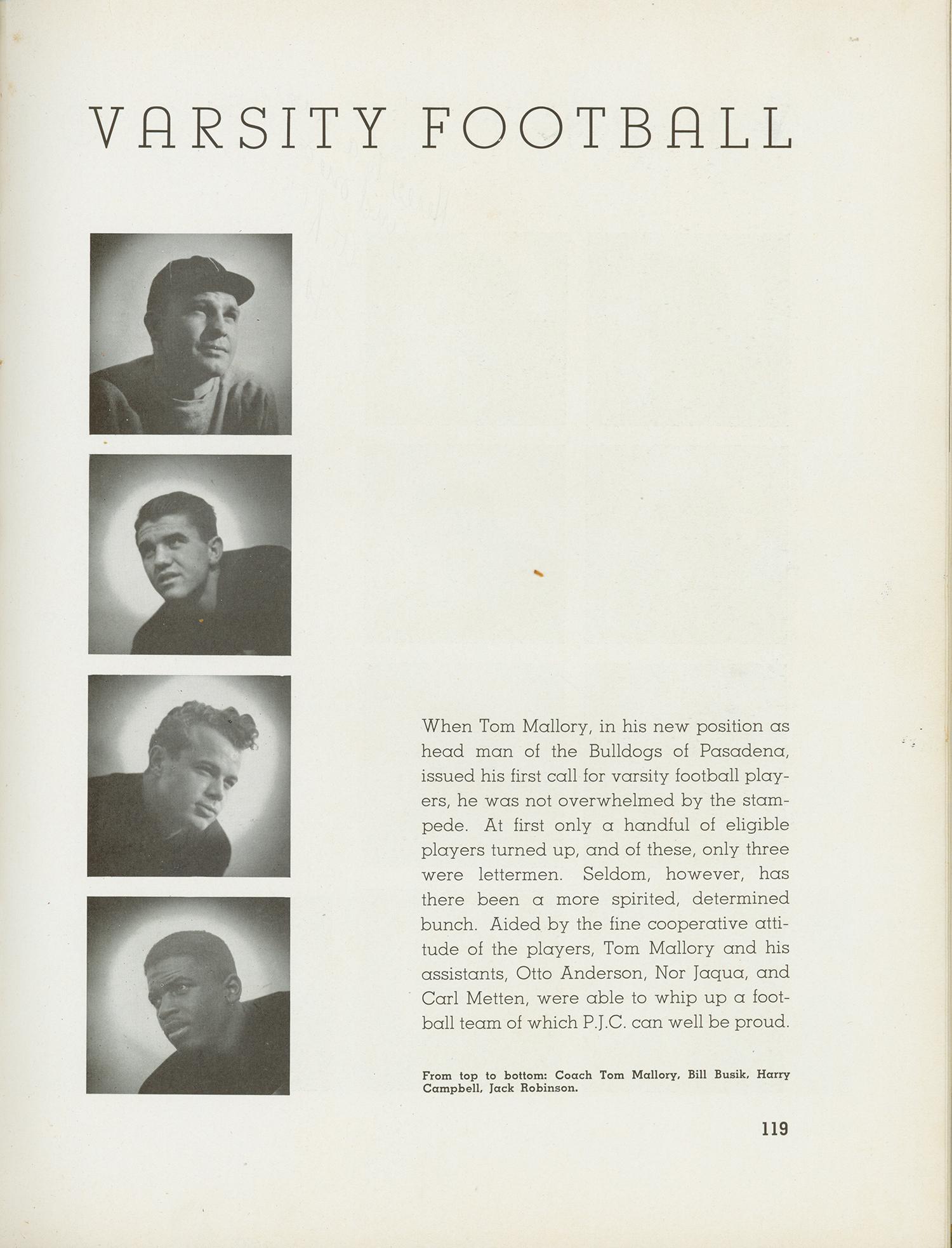 Jackie Robinson played running back and quarterback for Pasadena Junior College's varsity football team in 1937 and 1938. He's pictured above, at the bottom of the row. (National Baseball Hall of Fame and Museum)

After moving to Pasadena Junior College, Robinson occupied shortstop for the Bulldogs, “handling the situation ably,” according to the 1937 yearbook. Presumably he was a good fielder, but the yearbook mentions numerous occasions where Robinson’s bat did the talking. He also joined Mack on the school’s track team, where the two were friendly rivals, according to Rampersad.

“If this rivalry and these defeats caused Jack any discomfort, he admitted none,” Rampersad wrote. “Losing to his older brother was no dishonor, and he loved sharing in Mack’s glamour and traveling with him.”

By 1938, Robinson was a multi-sport star in Southern California, and these feats would punch his ticket to UCLA.

When skimming through the pages of a yearbook, it can be difficult to figure out who might make it big in life. Robinson’s classmates, however, can look back and say they knew him before he broke barriers in baseball and landed in Cooperstown.