It was a nondescript late summer baseball game between a pair of big league teams destined for fifth-place finishes in their respective divisions.

Quite likely the exhibition softball contest beforehand involving the cast of the hit television show Happy Days is what attracted a large number of the nearly 20,000 fans in attendance that afternoon.

A decade before Wrigley Field hosted its first night game, the Chicago Cubs defeated the visiting San Diego Padres, 9-6, on Friday, Aug. 17, 1979. The matchup featured a trio of future Hall of Famers: Ozzie Smith collecting two hits and stolen base and Dave Winfield clubbing his 27th home run in a losing cause, while closer Bruce Sutter locked down his 30th save with a scoreless ninth inning.

In the collection of the National Baseball Hall of Fame and Museum is a program from that noon showdown between the Happy Days cast and Chicago Media All-Stars that took place before the National League tilt.

Happy Days was a legendary television situation comedy that had an 11-season run from 1974-84. Billed as “A nostalgic and fun look at the ‘50s,” it became a Tuesday night staple on ABC-TV. Set in Milwaukee, the show reached the cultural zeitgeist when the character of Arthur “Fonzie” Fonzarelli, a cool, motorcycle-riding, leather jacket-wearing heartbreaker, transitioned from a supporting role to one of the leads.

During the late 1970s and early 1980s, the Happy Days cast members played softball together. It evolved from a fun, casual weekend bonding experience for the show’s cast and crew to a travelling roadshow that often played in big league stadiums from coast-to-coast raising money for charity. When the Wrigley Field appearance neared, the Cubs announced there would be 17,000 general admission tickets on sale the morning for the Cubs-Padres game, with the added incentive the exhibition softball game. 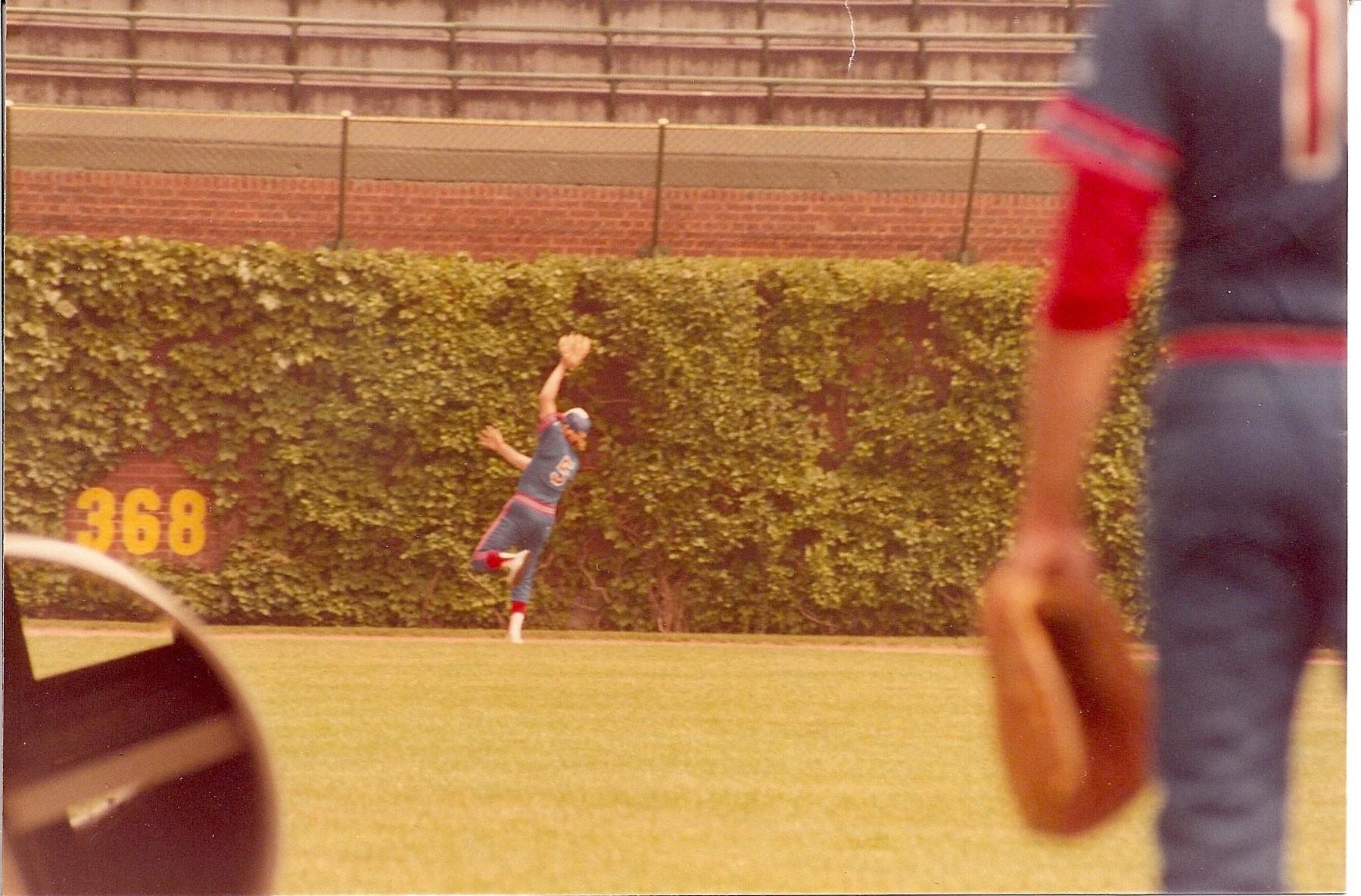 Donny Most, who played center field for the Happy Days softball team, tracks down a fly ball at Wrigley Field. (Courtesy Donny Most)

“We started the team as a gag, playing weekends, but we found it drew crowds,” Bosley said in 1979, “It gave people a chance to meet the cast, and it gave the cast a chance to sign autographs. You got a better way to spend a weekend?

“I play second base. That is the least amount of territory to cover. I’m a little old, but not bad. Half and half – half-good field, half-good bat.”

Williams, in a 1977 interview, compared his acting with playing softball.

Most, in a recent telephone interview from his home outside Los Angeles, called the softball experience with the Happy Days gang “amazing.”

“Garry Marshall, who was a big sports fan, organized the Happy Days softball team,” Most recalled. “He knew that some of us were good ballplayers, so he thought it’d be good to form a team. Afterwards, I thought that part of his motivation for forming the team was to keep us as in this family environment. He was smart because it certainly did add to an already very tightknit group. We were like a family.”

According to Most, whose Ralph Malph character was best friends with Howard’s Richie and Williams’ Potsie on the show, the cast would all fly together to a particular city, then take a charter bus to the hotel and then to the ballpark. 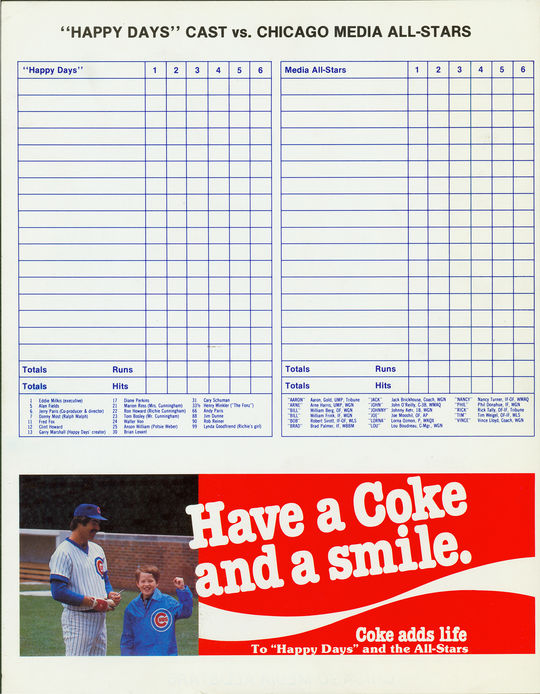 “And there we are, at a major league park and warming up. It was surreal,” Most said. “For me, who grew up a big Yankees fan, I thought I was dreaming. It was amazing. We had the greatest times. We always talked about it, how much fun it was. And then we got to meet some of the major league players. I remember it was all a big thrill for me.”

In a newspaper brief that would appear across the country, Kerr, a former professional basketball player, was warming up prior to the softball game when a ball got away from him and hit actor Rob Reiner, a star on another hit show, All in the Family, and who was playing on the Happy Days squad. “Who threw that ball at me?” demanded Reiner. “I did,” said Kerr. Looking up at the 6-foot-11, 280-pound Kerr, Reiner quickly changed his tune and said, “Hi, I’m Rob Reiner, glad to meet you.”

For Howard, who would go on to a successful career as a film director, his appearance as the left fielder that day led to some fans in the Wrigley Field bleachers unfurling an “Opie” banner and start chanting, "O-pie! O-pie! O-pie,!" a reference to his childhood role as Sheriff Taylor’s son on The Andy Griffith Show.

"When I ran out on the field at the softball game I felt like I was in the World Series. It was great!" said Howard, who starred on his high school basketball team. “It’s a tremendous thrill for me, just being out on the field. I like to get there when the park opens and shag flies.”

On Aug. 18, 1979, the day after the Wrigley Field game, the Happy Days group headed to Milwaukee’s County Stadium where 49,172 fans came to see their Brewers as well as the fictional TV characters who called “Cream City” home.

“Because our games were prior to the major league game, we’d have nice crowds but it wouldn’t be as full. Some people would get there later and didn’t care about our game,” Most said. “The reason I’m bringing that up is because of the Milwaukee game. We had like 50,000 people for our game and it didn’t get much fuller after that. So that was great.” 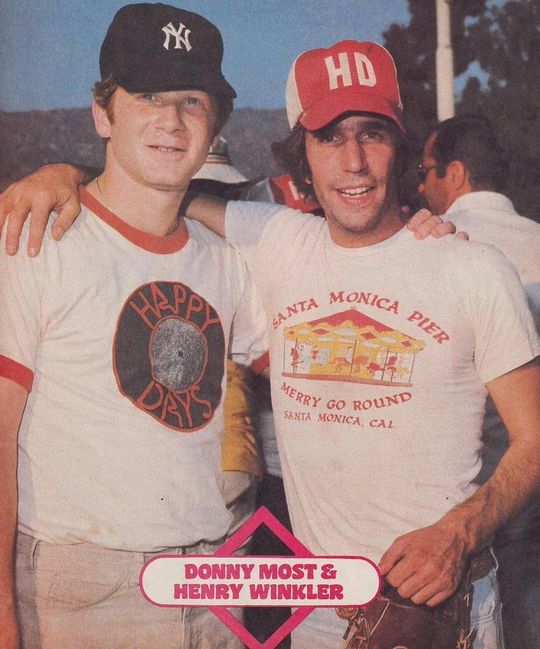 Donny Most, left, and Henry Winkler starred on Happy Days and on the softball field as members of the sitcom's traveling team. (Courtesy Donny Most)

Playing against a local media team headed by Brewers broadcaster Bob Uecker, Winkler pitched in a seven-inning game that ended in a 2-2 tie.

“I’ve never played softball before,” explained Winkler back then. “Ronny got me my mitt, gave me instructions on pitching.

“This is great. We get to go out and play a little ball. A lot of people I’ve never seen are giving me a lot of warmth, and I get to eat a stadium hot dog. So how bad can it be?”

Most remembered Winkler’s introduction to pitching, too.

“I remember Ron suggested since Henry doesn’t have a lot of experience playing, maybe he could learn to how to pitch because he did have good coordination and he moved really well,” Most said. “We saw pretty early on that he was able to pick it up and he became a really good pitcher. And there were times where he would be striking people out and pitch a pretty low scoring game. That turned out to be the best position for him.” 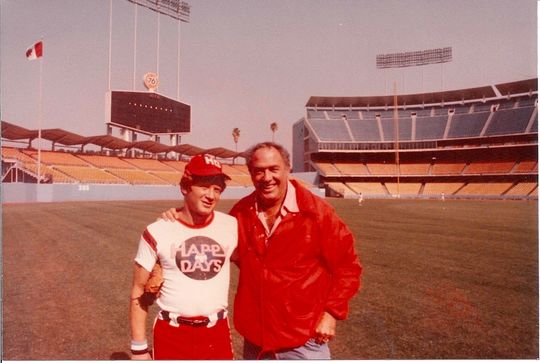 Donny Most, left, and Jerry Paris, the frequent director of Happy Days, share a moment at Dodger Stadium. (Courtesy Donny Most)

As for playing across the country with the actor who portrayed the Fonzie character at the height of its popularity, Most said it was like traveling with a rock star.

“We had fans storming areas to get to Henry and then security having to get us out of there for safety reasons,” Most said. “The yelling and screaming and pushing. It was pretty nutty. But exciting, too. Very exciting.”

Arguably the top ballplayer on the Happy Days roster, Most played centerfield and could hit for average and power. The lifelong Mickey Mantle fan’s love of the game dates back to childhood in Brooklyn.

“I did play some stickball and growing up, but a few blocks from us there was an area that probably had 10 baseball fields on it. And then during summers I’d go to camp and I played a lot of ball there,” Most said. “So I played softball, I played hardball and stickball. “And the first World Series I remember and followed avidly was the Yankees versus the Pirates in 1960. I might have started following baseball in 1959, but I really got into it in 1960 and ‘61. So that was my game. That was the game I loved the most and I followed the most.”

Most’s burgeoning entertainment career, which is still going strong, took precedent when it came time to pursue baseball as an Erasmus Hall High School student in the late 1960s.

“I was thinking of going out for baseball in high school, but our high school had almost 8,000 people, so the competition was crazy,” Most said. “Around that time is when I really was starting to focus more on pursuing acting and singing. I was shifting my priorities right around that time in the direction on show business. So that took a little bit of front seat to baseball.”

But Most’s skills as a softball player would catch the attention of manager Billy Martin, famous for his multiple stints as Yankees skipper.

“I can’t remember what park it was in, but Billy Martin was in the dugout watching us,” Most said. “There was a ball hit to me in center and I had to go back pretty far but I made the catch. I come into the dugout and Billy goes, ‘I like the way you went back on that ball out there.’ I was like, ‘Wow! Billy Martin just told me he liked the way I handled that ball out in center.’ Those kinds of things you just dream about.

“And then in that same game I wound up hitting a line drive in the gap in left-center and it rolled forever and I had an inside-the-park home run. And Billy says to me after, ‘I liked that line drive you hit in the gap.’ That was heaven.”

Most and his wife made a special trip to Cooperstown to visit the Baseball Hall of Fame seven or eight years ago.

“I’m thrilled that the program from a Happy Days softball game is part of the Museum’s collection,” he said. “I’m definitely going to try to make another trip one of these days to see it.” 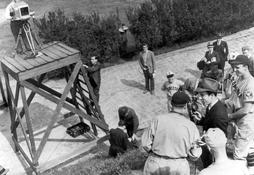 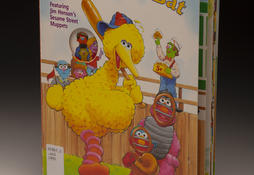 #Shortstops: Can you tell me how to get…

The intersection of American culture and baseball is illustrated in this <em>Sesame Street</em> book. 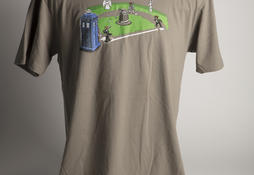 A T-shirt from the Museum's collection features the British television series Doctor Who, with the "doctors" playing a baseball game. 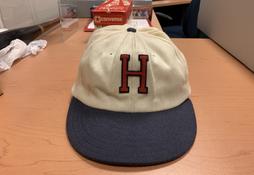 A recent donation to the National Hall of Fame and Museum highlights a brief moment in a player's career, and the legacy of the PCL.