Part of the SHORT STOPS series
Written by: Garrett Allen

On July 4, as we commemorate our country’s independence, the baseball world celebrates one of America’s enduring legends: Lou Gehrig.

More than 80 years ago, the Yankees publicly honored their beloved slugger as he battled through amyotrophic lateral sclerosis (ALS), a debilitating disease which still bears his name.

On July 4, 1939, 60,000 fans gathered in Yankee Stadium. The Yankees hosted a doubleheader with the Washington Senators and lost the first game, 3-2. Afterward, officials prepared a mic, and some of Gehrig’s former teammates took the field. When Gehrig stepped up to speak, the crowd fell unusually silent.

What followed endures today in baseball and American culture. Gehrig, the image of class, praised his family, teammates, and even opponents for their tremendous support. He dwelled not on negatives, but on positives, closing with “I’ve been given a bad break, but I’ve got an awful lot to live for.”

With these words, Yankee Stadium erupted into the loudest ovation the stadium has ever seen, and the effects of this speech did not stop there. As per the New York Daily News in 2003, Gehrig’s address “made the Yankees grander than Ruth’s bat, larger than the largest stadium in the game, classier than pinstripes,” and exemplified “the high mark of grace under pressure for all of sport.” 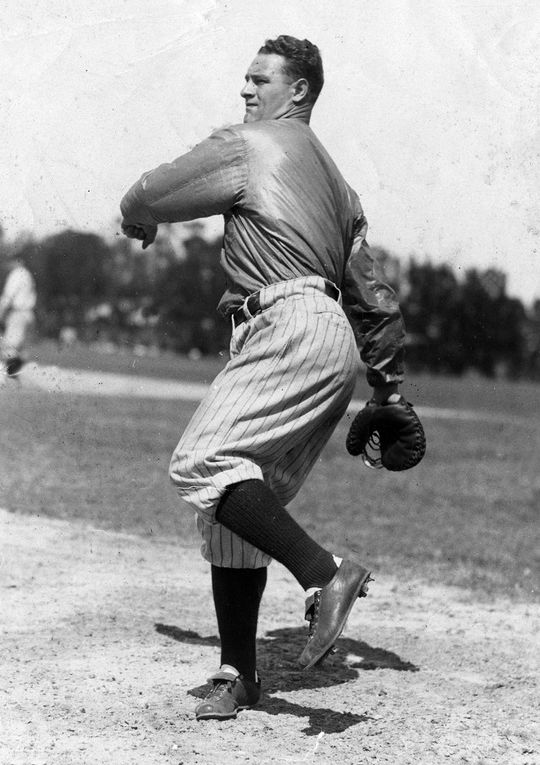 Even today, reenactments of the speech raise awareness for ALS. It’s a moment that transcends baseball.

As Gehrig walked off the field, others carried all his gifts except for one: a silver trophy, presented to him by the Yankees, which he clutched to his chest. A bronze plaque at the base bore a poem entitled “To Lou Gehrig,” penned by sportswriter John Kiernan of the New York Times upon Gehrig’s teammates’ request. This trophy, and this poem, speak volumes about Gehrig’s character on and off the field: 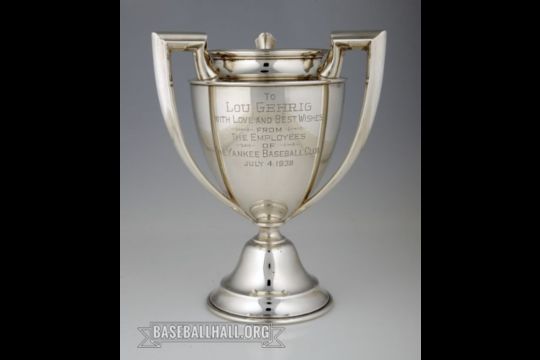 The New York Yankees presented this trophy to Lou Gehrig on the day he delivered his "Luckiest Man" speech. (Milo Stewart Jr./National Baseball Hall of Fame and Museum)

“We’ve been to the wars together;
We took our foes as they came:
And always you were the leader,
And ever you played the game.
Idol of cheering millions:
Records are yours by sheaves:
Iron of frame they hailed you,
Decked you with laurel leaves.
But higher than that we hold you,
We who have known you best;
Knowing the way you came through
Every human test.
Let this be a silent token
Of lasting friendship’s gleam
And all that we’ve left unspoken.

- Your pals of the Yankee team.”

Though Gehrig passed away in 1941, his legacy lived on through his teammates and persists today. He personified integrity, sportsmanship and courage amongst immense hardship. 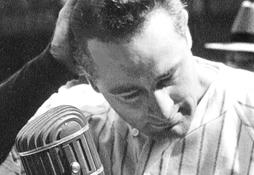