"Five-fifteen PM A state of war has just been declared with the United States."

So wrote Moe Berg, atop a note dated Dec. 7, 1941, the day that Japanese troops attacked the U.S. Navy base at Pearl Harbor. The following day, President Franklin Delano Roosevelt delivered a speech to a joint session of the U.S. Congress, when he uttered the now-immortal line “This is a day which will live in infamy,” and Congress issued a declaration of war immediately thereafter.

The enigmatic Berg, a major league catcher, attorney and gifted linguist, penned the note in both English and Japanese. He studied classical and Romance languages at Princeton, and allegedly turned down an offer to teach there in favor of pursuing professional baseball.

“Moe Berg is as smart a ballplayer as ever came along,” remarked Hall of Famer Casey Stengel. “But I’ll tell ya again, nobody ever knew his life’s history. I call him the mystery catcher. Strangest fellah who ever put on a uniform.”

Berg’s Japanese fluency evolved over the course of two early visits to Japan, first in 1932 and again in 1934.

Both trips were baseball-focused; in ’32 he was part of a small envoy that hosted baseball seminars at universities around the country, and in ’34 he was a member of the historic All-Star tour that featured luminaries like Babe Ruth, Jimmie Foxx and Lou Gehrig. 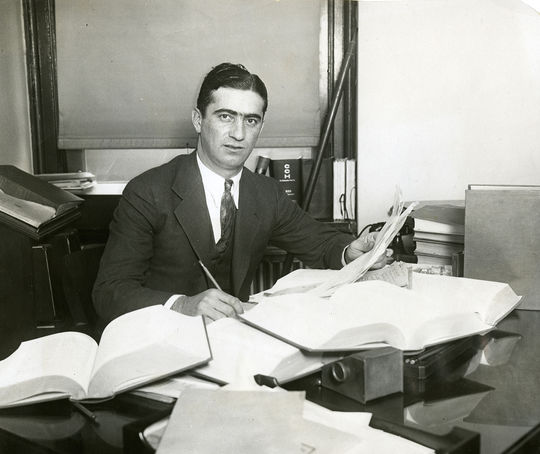 While serving under Nelson Rockefeller as a goodwill ambassador, Moe Berg made a radio plea to the Japanese people in their own language on Feb. 23, 1942, 11 weeks after the attack on Pearl Harbor, warning them that they had been betrayed by their leaders. He had become fluent in Japanese during baseball trips to the country in 1932 and 1934. (National Baseball Hall of Fame)

It was during this 1934 trip that Berg reportedly snuck onto the roof of a Tokyo hospital and took home video footage of the skyline. He gave the videos to the U.S. government upon his return to the states.

Prior to the bombing of Pearl Harbor, Berg had spent two years as a coach with the Red Sox, but in January of 1942 Berg left baseball to serve his country, accepting a role with the Office of the Coordinator of Inter-American Affairs.

In this new job under Nelson Rockefeller, Berg used his linguistic talents to make an impassioned radio plea to the Japanese in their own language.

“You have outraged us and every other nation in the world with the exception of two,” Berg warned 11 weeks after the attack on Pearl Harbor.

“You cannot win this war. We and the 20 other republics of America are unified - we are united. Your leaders have betrayed you.” 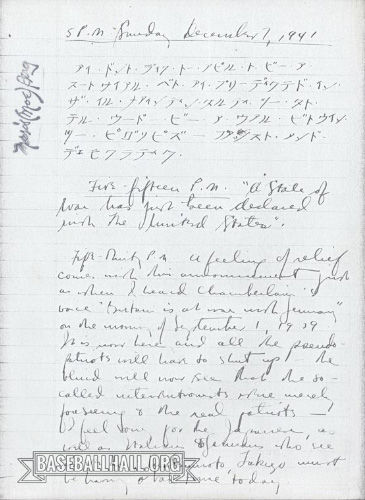 A photocopy of a note written by Moe Berg on Dec. 7, 1941. (National Baseball Hall of Fame and Museum)

One year later, he was recruited as an undercover agent by the Office of Strategic Services, the predecessor to the CIA. In this role he worked on the Larson Project, which focused on attempting to ascertain Germany’s development of an atomic bomb.

In addition to his note on the day of Pearl Harbor, the National Baseball Hall of Fame and Museum has preserved a number of artifacts from Berg’s life which help to tell the story of the 15-year-big-league-catcher-turned-spy.

Among these items is his Spalding catcher’s mask and his Medal of Freedom. Berg was awarded the medal after his service during WWII but refused it; his sister, Ethel, claimed the award after his death and later donated it to the Museum. 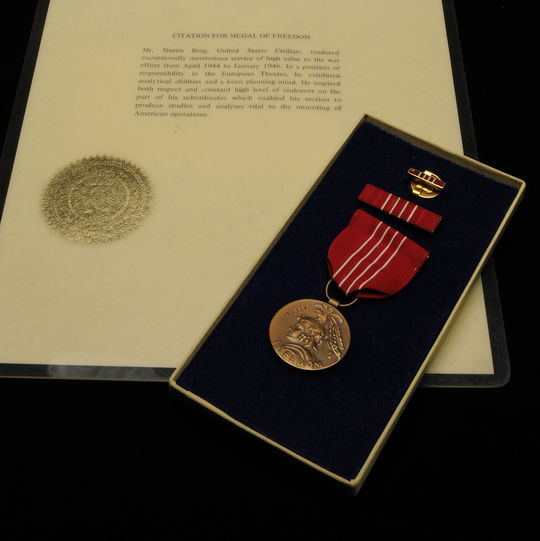 The story of Berg’s life is told through artifacts and documents in the Museum’s Moe Berg: Big League Spy exhibit. 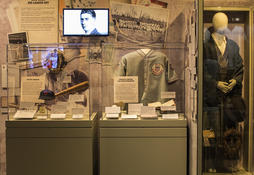 Artifacts, photos and documents from Hall of Fame collection reveal fascinating life of one of baseball’s most unusual characters.