In 1975, Rangers catcher Jim Sundberg became the first player in history play in at least 155 games and fail to bat .200.

No sentence could better illustrate how good Sundberg was behind the plate.

By the time Sundberg’s 1980 Topps card hit the market, Sundberg was a two-time All-Star and four-time Gold Glove Award winner. But in an era that included future Hall of Fame catchers Johnny Bench, Gary Carter, Carlton Fisk and Ted Simmons – as well as perennial All-Stars like Bob Boone and Thurman Munson – Sundberg was often overlooked.

The numbers he compiled, however, live to tell the tale of one of the most durable and talented catchers in history.

Born May 18, 1951, in Galesburg, Ill., Sundberg was drafted out of high school in the sixth round in 1968 by the Athletics, but chose to play college ball at the University of Iowa. The Rangers then took Sundberg in the eighth round of the 1972 MLB Draft, but Sundberg did not sign until Texas chose him again with the second overall pick in the January 1973 draft – right behind Dick Ruthven of the Phillies. 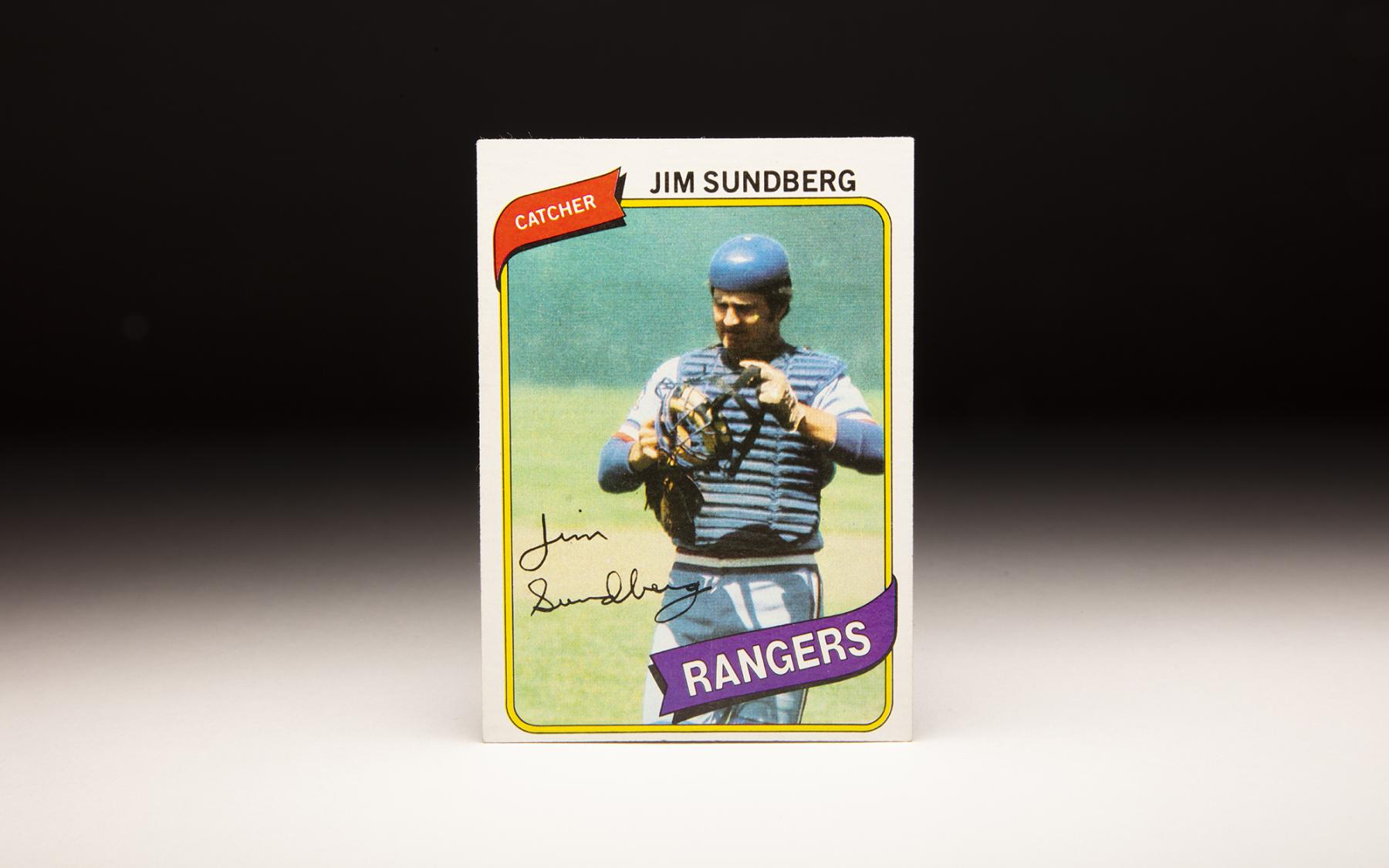 After hitting .298 in 91 games with Double-A Pittsfield in 1973, Sundberg made the big league roster in 1974 and quickly established himself as Texas’ starting catcher. That summer, he was named to the American League All-Star team.

“When I first came up, I was awed by the people I played against and with,” Sundberg told the Galesburg Register-Mail after learning of his All-Star Game selection. “But now I feel I’m one of them.”

Sundberg hit .247 with three home runs and 36 RBI in 132 games in 1974, but it was his defense that stood out. He led all AL catchers with 15 double plays that year and threw out 43 base runners, the fifth-best total in the league. His .990 fielding percentage ranked third. The next season, the Rangers fired manager Billy Martin after 95 games and replaced him with Frank Lucchesi. However, neither skipper saw any reason that Sundberg shouldn’t be in the lineup every day.

Despite a sophomore slump at the plate that dropped his batting average to .199 and pushed his OPS to .539 – the lowest mark ever for any non-shortstop playing in at least 155 games – Sundberg led AL catchers in putouts (791) and assists (101) while finishing second in caught stealings (65) and caught stealing percentage (45.8 percent).

Incredibly, Sundberg’s mark was set in the Texas heat, with 76 of his games coming at home in Arlington. The next season, Sundberg brought his average up to .228 while appearing in 140 games, earning his first Gold Glove Award while this time leading the league with 69 caught stealings. Then in 1977, Sundberg found his footing at the plate – hitting .291 with 65 RBI and a .365 on-base percentage while earning another Gold Glove Award and finishing 15th in the AL Most Valuable Player vote.

From 1975-77, Sundberg averaged 148 games caught per season. As if on cue, he appeared in 148 games behind the plate in 1978 – earning his first lineup appearance at a position other than catcher when he was the Rangers’ designated hitter in the first game of a doubleheader on June 16. But even in that game, Sundberg entered as a catcher in the ninth inning – then caught all nine innings of the second game. 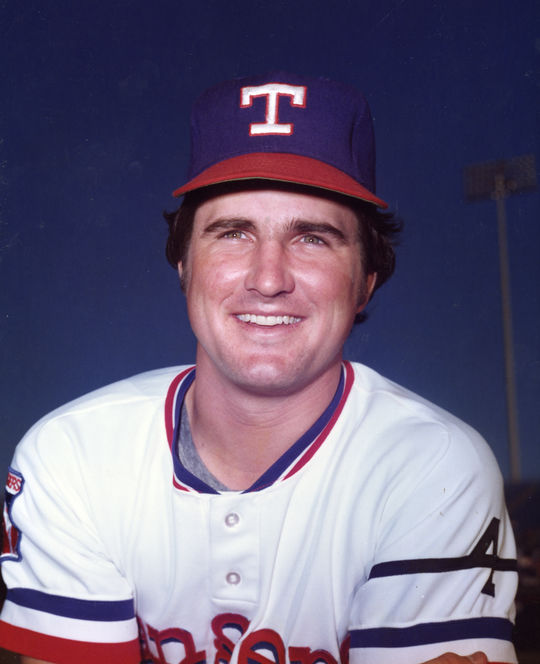 Jim Sundberg signed with the Rangers after they selected him with the second overall pick of the January 1973 draft. (National Baseball Hall of Fame and Museum)

Sundberg settled in as a .270 hitter over the next few seasons, remaining the Rangers’ starting catcher through the 1983 season, when he his average dropped to .201 at age 32. From 1975-81, Sundberg appeared in 996 games, all but one (a game on July 30, 1978, when he appeared as a pinch hitter in the second game of a doubleheader) where he caught at least some of the game.

In those seven seasons, the Rangers played 1,076 games – meaning Sundberg caught 92.6 percent of the Rangers games in that span. During that time, Sundberg won six straight Gold Glove Awards.

Sundberg began to slow down in 1982, hitting .251 and appearing in just 131 games as a catcher, the lowest non-strike total of his career. The Rangers and Dodgers nearly agreed on a trade for Sundberg after the season, but Sundberg vetoed the deal (he had a no-trade clause in his contract) when he and the Dodgers could not agree on a contract extension.

But following the 1983 season, Rangers manager Doug Rader made it clear that he would prefer a different catcher in 1984. At baseball’s Winter Meetings on Dec. 8, 1983, the Rangers sent Sundberg to the Brewers in exchange for Ned Yost and minor leaguer Daniel Scarpetta.

“I always thought I’d end my career in Texas,” Sundberg told the Fort Worth Star-Telegram following the trade. “I really thought someday there would be a Jim Sundberg Day at Arlington Stadium. I thought that would be neat to have, like Brooks Robinson and Carl Yastrzemski, and if I’d played at a constant level that might have happened.

“The years I’ve spent here have been great.”

In 1984 with the Brewers, Sundberg earned his third All-Star Game selection, hitting .261 in 110 games (109 behind the plate) while leading the AL in caught stealing percentage (50 percent) for the first time. He also led the league in fielding percentage for the fifth time. 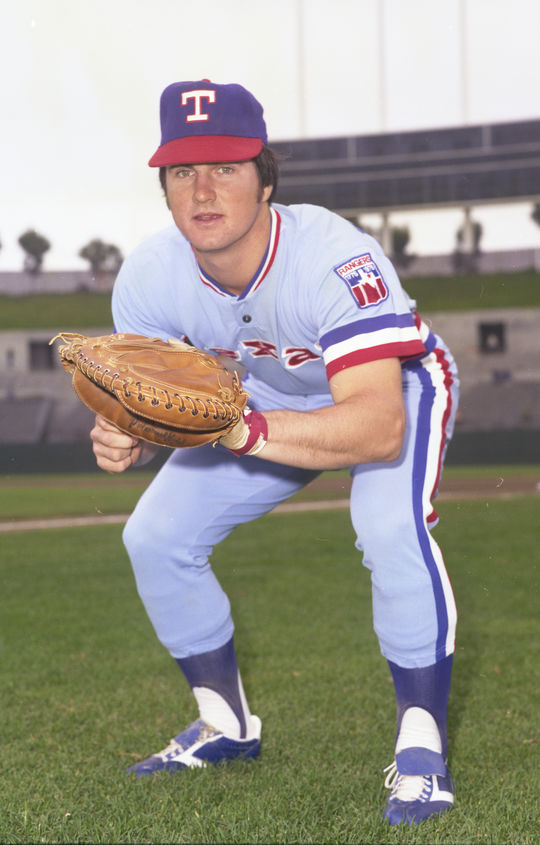 Jim Sundberg retired after 16 seasons in the majors, with 1,927 games behind the plate. (Doug McWilliams/National Baseball Hall of Fame and Museum)

Then on Jan. 18, 1985, the Brewers, Royals, Rangers and Mets executed a four-team trade that saw Sundberg land in Kansas City. It was a perfect fit for Sundberg, who joined a young Royals team that had won the AL West title in 1984. He hit .245 in 112 games behind the plate, masterfully handling a Kansas City staff that featured young aces Mark Gubicza, Danny Jackson and 1985 AL Cy Young Award winner Bret Saberhagen.

The Royals won the AL West, then rallied from a 3-games-to-1 deficit to defeat the Blue Jays in the ALCS – with Sundberg driving in a team-best six runs in the series. Sundberg’s three-run triple in the sixth inning of Game 7 turned a 2-1 KC lead into a 5-1 advantage and effectively put the game out of reach.

In the World Series against the Cardinals, Sundberg hit .250 with six walks and a team-best six runs scored as the Royals once again rallied from a 3-1 deficit. In the pivotal Game 6, Sundberg scored the winning run as the Royals – just two outs away from elimination – rallied on Dane Iorg’s two-run single off Todd Worrell.
Sundberg had two walks and an RBI in Game 7 as the Royals won 11-0.

Sundberg appeared in 140 games – 134 behind the plate – in 1986 in his final season as a regular. He spent 1987 and part of 1988 with the Cubs before heading back to Texas, spending his final season in 1989 playing in front of appreciative fans.

Over 16 big league seasons, Sundberg hit .248 with 1,493 hits and 243 doubles. En route to six Gold Glove Awards and three All-Star Game selections, Sundberg appeared in 1,927 games behind the plate – which ranked second on the all-time list behind Bob Boone at the time of his retirement.

“I have not sought to be better than everyone else, but the best I could be,” Sundberg said when he announced his retirement. “So I leave the game feeling good about being the best that I could be.”

Bruce Bochy may be best known for his managerial career, but this 1980 Topps card highlights his time as a major league player.