Part of the BASEBALL HISTORY series
Written by: Evan Gerike

In the Gila River Indian Community in Arizona, while Japanese-Americans were being forced to move into internment camps across the country, Kenichi Zenimura brought people together by building a baseball field.

In the early months after the bombing of Pearl Harbor and after the United States joined in the fighting of the second World War, with xenophobia rising, President Franklin D. Roosevelt signed an executive order forcing Japanese-Americans into one of 10 internment camps in the country.

In the Gila River Internment Camp, there was little to do all day. It led to baseball. And that led to Cooperstown.

Zenimura, who was born in Hiroshima and spent his childhood in Hawai’i, began to build a baseball field in order to improve morale and build a better relationship with those outside the camp.

Soon, Zenimura was being assisted by others in the camp to dig out and flood the field. He took poles from construction sites for the fence. The home plate, as well as the pitching rubber, was made from wood.

The wood Zenimura plate will be displayed by the Los Angeles Dodgers on loan from the National Baseball Hall of Fame and Museum until November 2022 alongside a silver tray presented to Jackie Robinson for being selected to the 1954 All-Star team.

The Museum is home to more than 40,000 artifacts and regularly loans pieces to other institutions so their stories can be shared around the nation and the world.

Robinson started the 1954 All-Star Game in left field, batting seventh. In the top of the fourth inning, with the NL All-Stars down 4-2, Robinson came up to bat with runners on first and second.

He doubled in the right-center gap, driving in two runs and tying the ball game. He would score two batters later on a double from New York Giants right fielder Don Mueller, who was pinch hitting, two give the National League a one-run lead.

Robinson was replaced after the top of the fourth by Willie Mays. The NL All-Stars would fall to the AL, 11-9. 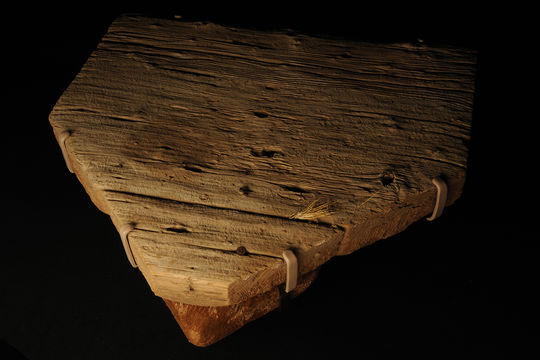 Kenichi Zenimura was assisted by others in Gila River Internment Camp to build a baseball field. Zenimura took poles from construction sites to create a fence. The home plate, as well as the pitching rubber, was made from wood. (Milo Stewart Jr./National Baseball Hall of Fame and Museum) 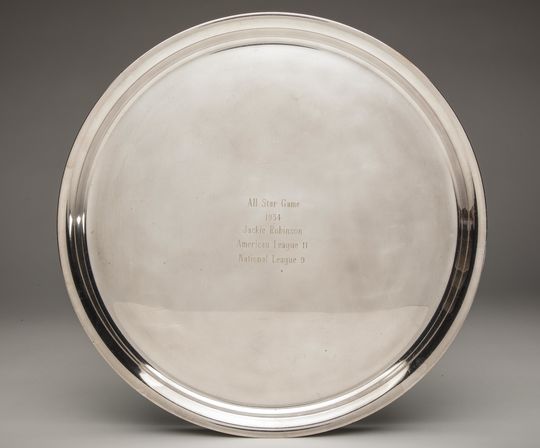 Jackie Robinson received this 1954 All-Star Game gift honoring his selection as one of the league's best. (Milo Stewart Jr./National Baseball Hall of Fame and Museum)

It would be Robinson’s last All-Star appearance of his 10-year NL career.

In 1954, All-Stars received gifts from the league presidents to honor their selection as one of the league’s best that season. The gifts included items such as watches and silver trays like the one Robinson received. Pittsburgh left fielder Frank Thomas and American League manager Casey Stengel received silver trays as well; Stengel’s is also in the Hall of Fame’s collection.

Meanwhile, Robinson’s original Hall of Fame plaque is also set to go on loan in 2022 at the Jackie Robinson Museum.

When first inducted in 1962, Robinson wished his plaque to touch on only his on-field playing achievements, which merited a first-ballot selection. However, in 2008, the Hall of Fame revealed an updated plaque recognizing Robinson for integrating the National League.

“Displayed tremendous courage and poise in 1947 when he integrated the modern major leagues in the face of intense adversity,” the last line of the new plaque reads.

On top of those items, another significant baseball item will be headed to the National Archives and Records Administration.

The 1918 season was shortened due to World War I, with the final regular season games being played on Sept. 2. The finale of the 14-game Labor Day slate was between the Detroit Tigers and the Chicago White Sox. The Tigers won, 7-3.

The last ball was caught by Tigers outfielder Davy Jones, who was playing in his first and only game that season and last of his major league career. The baseball will be loaned to the National Archives through July 2023. 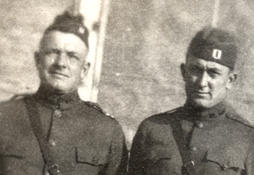 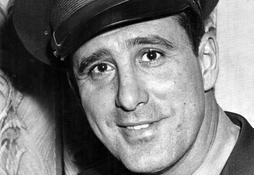 After Pearl Harbor, baseball played a part in fight for freedom 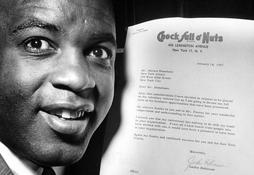 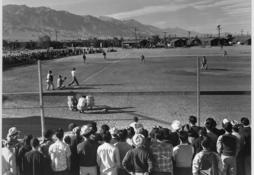 A Field of Dreams in the Arizona Desert

Zenimura Field was a beacon of hope in a time of darkness.