The second Sunday in May, Mother’s Day, has for more than 100 years been a time for children to reflect on a special bond. In baseball circles, one of the more poignant stories on this relationship belongs to the “Iron Horse” and “Mom.”

Among the dozens of Lou Gehrig-related artifacts in the collection of the National Baseball Hall of Fame and Museum is an 8 ½ inch high bronze statuette of an anonymous ballplayer, the batter in a right-handed stance and looking toward the horizon. The silver plate on front of base is inscribed, “Hello Mother / With My Lima / Friends Today / Oct. 14 '27 / Lou.”

The backstory on this unique item dates to the fall of 1927 when Gehrig and Babe Ruth, important cogs on a New York Yankees powerhouse often referred to as Murderers’ Row. After the team swept the Pittsburgh Pirates in the Fall Classic, the pair of sluggers soon departed on a three-week, coast-to-coast barnstorming tour with Ruth’s squad named the Bustin’ Babes and Gehrig’s the Larrupin' Lou’s.

The first leg of the tour included a stop in Lima, Ohio, on Oct. 14, only six days after the Yankee franchise’s second World Series crown. The barnstorming duo played before a reported 2,000 fans, an attendance figure likely adversely affected by the cloudy Friday afternoon conditions.

“The Bustin’ Babes, Babe Ruth’s barnstorming team, defeated the Larrapin Lou’s, headed by Lou Gehrig, by a score of 8-6 in an exciting game today,” reported The New York Times on Oct. 15, 1927. “Ruth was thrown out trying to steal home in the ninth, but he saved the game in the same inning by fanning three batters. The Bambino also poled out two home runs.”

The game, which pitted two local rivals for a county championship, had Ruth playing for the Lima Independents while Gehrig represented a Celina, Ohio, outfit. As was common on this tour, both stars pitched and played first base in the game. Before they took the field, both Ruth and Gehrig visited the Allen County Children’s Home and gave away autographed baseballs.

“Major league players,” Gehrig told the Lima News sports editor, “get a real kick out of playing in the small towns and cities where enthusiasm runs so high.”

It was later reported by the Associated Press that the memory of this celebrated pair’s Lima visit would live on when a 10-pound baby boy had been christened Louis Herman Boylan in honor of George Herman Ruth and Henry Louis Gehrig.

But any lighthearted moments masked Gehrig’s ongoing concern of his beloved mother, who in early October underwent surgery for a goiter and was still recovering as the tour began.

Among the hoopla of the day’s event, the New York Daily News, on Oct. 20, 1927, would report that the baseball fans of Lima “presented the two Yankees with a pair of handsome bronze statuettes. One is inscribed to little Dorothy Ruth, the Babe’s daughter, and the other to Lou’s mother.”

The statuette given to Gehrig’s mother, Christina (Mom) Gehrig, would be donated to the Hall of Fame by her estate in 1955. Soon after Mrs. Gehrig passed away in March 1954 at the age of 72, her attorney announced that she had willed all her trophies and awards received by her late son, 35 in total, to the Hall of Fame. Lou Gehrig tragically died at age 37 on June 2, 1941, the result of amyotrophic lateral sclerosis (ALS).

“There was a great comradeship between mother and son; intimates used to call it the Gehrig Mutual Admiration Society,” wrote Fred Lieb, winner of the J.G. Taylor Spink Award in 1972, in Mrs. Gehrig’s obituary that later appeared in the Sporting News. “Mom worshipped her son, and as for Lou, there was no one else to compare with his Mom. He used to say that the thing that gave him greatest joy about his success, and his bettered financial position, was that he was able to repay Mom and Pop for their early sacrifices.”

The German-born Mrs. Gehrig, who came to the United States in 1888, was one of baseball’s most famous mothers, regularly attending her son’s games, from his days at Columbia University until 1939 when he was forced to retire. Lou was the only one of her four children that lived past their first birthday. 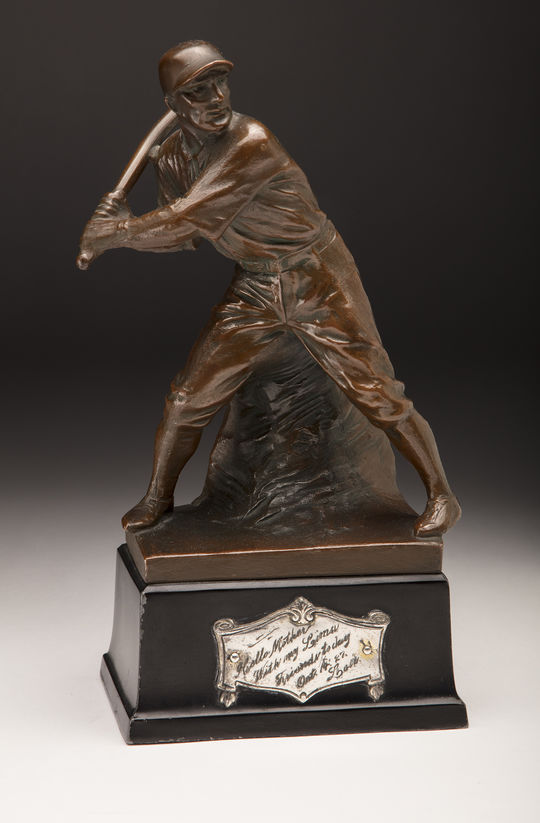 This bronze statue was acquired during a 1927 barnstorming tour of Lou Gehrig and Babe Ruth's respective teams. The baseball fans of Lima, Ohio (one of the stops on the tour) presented the Ruth and Gehrig with a pair of statues, one for Ruth's daughter and the other (pictured above) for Gehrig's mother. (Milo Stewart Jr./National Baseball Hall of Fame and Museum) 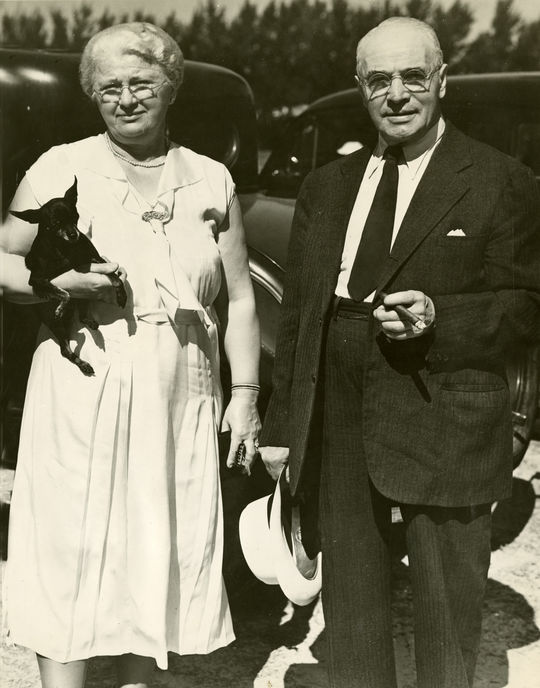 Lou Gehrig's mother Christine, who came to the United States in 1888, regularly attended her son’s games, from his days at Columbia University until 1939. She's pictured above with her husband, Heinrich. (National Baseball Hall of Fame and Museum) 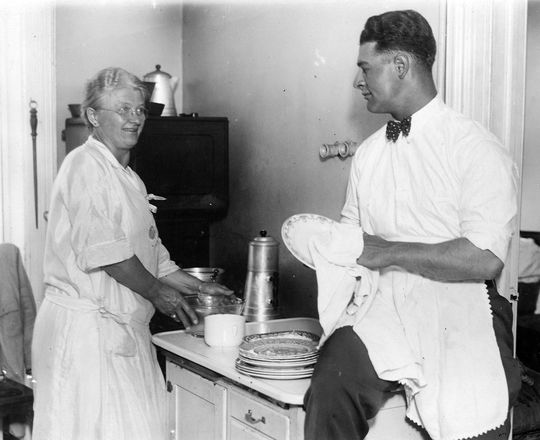 Lou Gehrig was very close with his mother, and often said that he was happy that his on-field success could help him repay his parents for their early sacrifices. (National Baseball Hall of Fame and Museum)

As for the Ruth-Gehrig barnstorming tour of 1927, it ended in early November with the Yankee greats having travelled some 8,000 miles for 21 games in nine states (New York, New Jersey, Rhode Island, Ohio, Missouri, Nebraska, Iowa, Colorado and California) played before an estimated 220,000 fans.