At 15 years old in 1943, Audrey Wagner began her career with the All-American Girls Professional Baseball League, and her efforts on the field helped her earn enough money to put herself through college and medical school. While playing baseball was a dream come true, becoming a doctor was her life goal.

Alongside baseball, Wagner performed a number of jobs in order to go to school including setting pins at a local bowling alley, working in greenhouses and grocery stores and carrying a newspaper route. Playing baseball, however, was her most successful endeavor.

Playing her entire AAGPBL career with the Kenosha Comets, Wagner had an all-time .469 slugging percentage and won her first batting crown in 1946 when she also led the league in slugging, tied for the lead in doubles and had the most total bases. She won the player of the year in 1948, one year after losing the award by 1 point to Dottie Kamenshek. A Comets tunic worn by Wagner that year is a part of the collection at the National Baseball Hall of Fame and Museum.

Making 125 dollars a week, Wagner was able to put herself through school at Elmhurst College near Chicago, Ill. She went on to study medicine at the University of Illinois-Chicago Medical School, graduating in 1955. Out of 164 graduates, Wagner was one of just 12 women to earn her degree.

After her graduation, her National Girls Baseball League team, the Parichy Bloomer Girls, held a “Doc Wagner” night in honor of her accomplishments.

By the time she graduated medical school, she had spent 12 years playing softball and baseball in both the AAGPBL and the National Girls Baseball League. 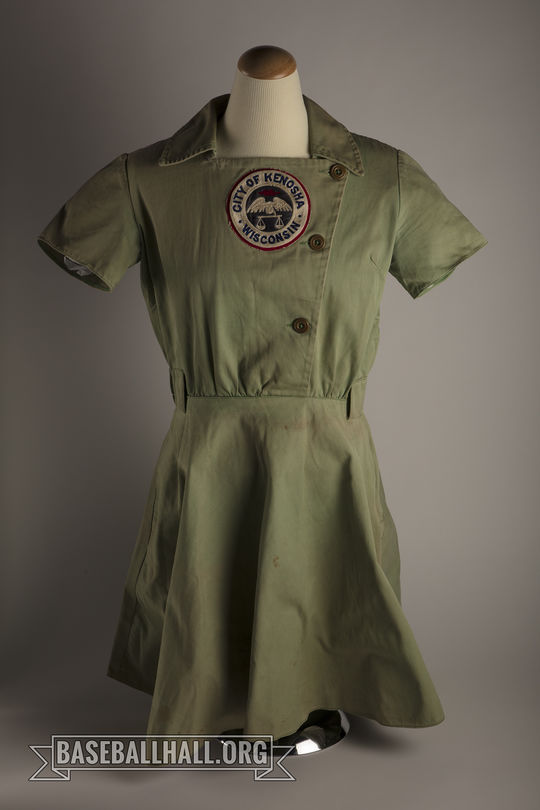 Audrey Wagner wore this Kenosha Comets tunic in 1948, the year she won the AAGPBL Player of the Year Award. She was the only player to hit over .300 that year. PASTIME (Milo Stewart Jr./National Baseball Hall of Fame and Museum)

Once Wagner received her degree, she hung up her cleats and interned at Cook County Hospital where she specialized in obstetrics. After her internship and residency, she would open up a practice in California where she lived until her death in a plane crash in Rock Springs, Wyo, in 1984.

Without the AAGPBL, Wagner may not have been afforded the same opportunities and her dreams of becoming a doctor may have never come true. The money she earned during her time with the league was more than she would have earned doing smaller jobs. Her talents on the field gave her the ability to fulfill her dreams.