Johnny Vander Meer and J. Edgar Hoover? It’s a connection that could only be found in Cooperstown.

In Vander Meer’s Library file at National Baseball Hall of Fame and Museum is a copy of a 1938 typed letter sent by the longtime Federal Bureau of Investigation director – congratulating the Cincinnati Reds southpaw on his two consecutive no-hitters.

In the letter, typed on the chief G-Man’s letterhead and dated June 17, 1938, Hoover writes, “I did have time to glance at the sports page of one of the Miami papers and read the account of the thrilling no-hit game which you pitched against the Boston Bees, and then when I read of your second no-hit game in five days I simply could not resist dropping you this note to extend you my congratulations on this remarkable feat.” 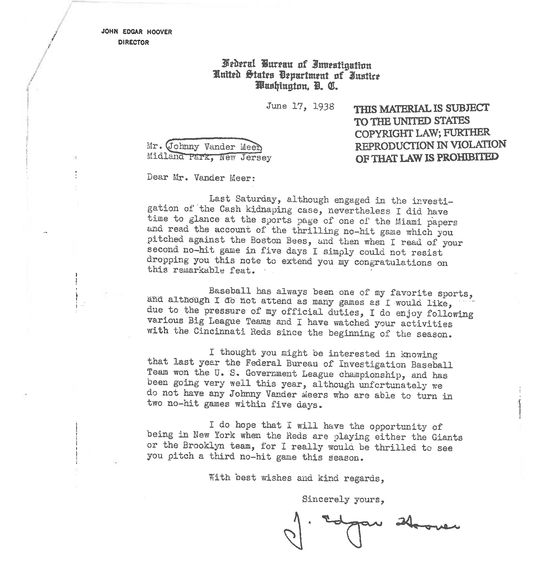 Hoover begins the letter by telling Vander Meer that he’s been “engaged in the investigation of the Cash kidnapping case,” referring to the kidnapping of 5-year-old James B. Cash Jr., known as “Skeegie,” who had been kidnapped from his bed in Princeton, Fla. on May 28, 1938.

Later in the letter Hoover admits that baseball has always been one of his favorite sports and that he attends many games, “although I do not attend as many games as I would like, due to the pressure of my official duties.”

In fact, years later, Hoover would be considered for the job of big league baseball’s commissioner. After a 1945 speech in which he extolled the virtues of wartime baseball, Hoover’s name shot to the top as a possible successor when big league baseball’s first commissioner, Kenesaw Mountain Landis, passed away in 1944. The job eventually went to Happy Chandler. When Chandler resigned his post in 1951, Hoover’s name again was bandied about.

Ellis Ryan, the principal owner of the Cleveland Indians and a member of baseball’s screening committee in search of a replacement for Chandler, said in a 1951 interview, “For instance, if J. Edgar Hoover decided to run, I’m sure he would get every vote. But that is out of the question. It would be improper for baseball to attempt to take so valuable a man away from the government.”

After sharing with Vander Meer the recent success of the FBI’s baseball team in Washington, D.C., Hoover ends the letter by wishing the hurler luck in the future, adding, “I really would be thrilled to see you pitch a third no-hit game this season.”

Hoover, once on the Little League board of directors, said that baseball would be the greatest deterrent to crime that America had ever seen.

“Keep kids in sports,” his motto went, “and out of courts.” 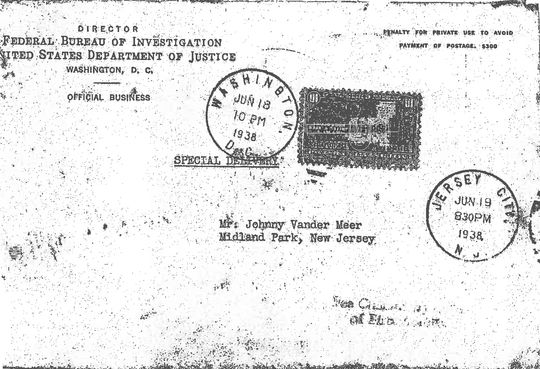 Pictured above is the envelope J. Edgar Hoover used to send Johnny Vander Meer a letter of congratulations following his two consecutive no-hitters. (National Baseball Hall of Fame and Museum) 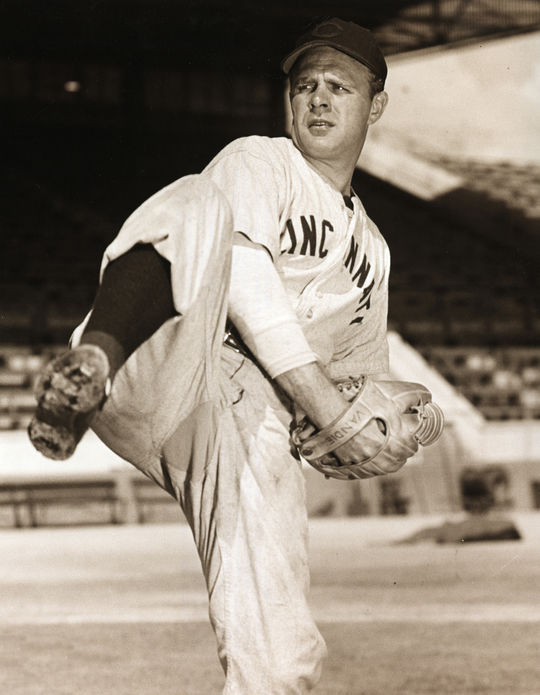 Johnny Vander Meer pitched for the Cincinnati Reds from 1937-43 and again from 1946-49. (National Baseball Hall of Fame and Museum)