They’re furry, funny and cuddly – and never played a game. But the baseball experience seems incomplete today without mascots.

And thanks to a recent donation, the National Baseball Hall of Fame and Museum will be able to tell the story of some of Japanese baseball’s best-known team supporters.

The Museum received a donation of 17 mascot dolls from Tim Wiles, the former director of research at the Hall of Fame. During his time at the Hall, Wiles played a part in the Hall receiving the full-sized San Diego Chicken and Phillie Phanatic mascots. He said those helped him gain an interest in collecting mascots, and he would display the ones he acquired in his office space.

Wiles would befriend Masanao Saijo, a visitor and friend of the Hall who travels every year from Japan to visit the Hall of Fame. 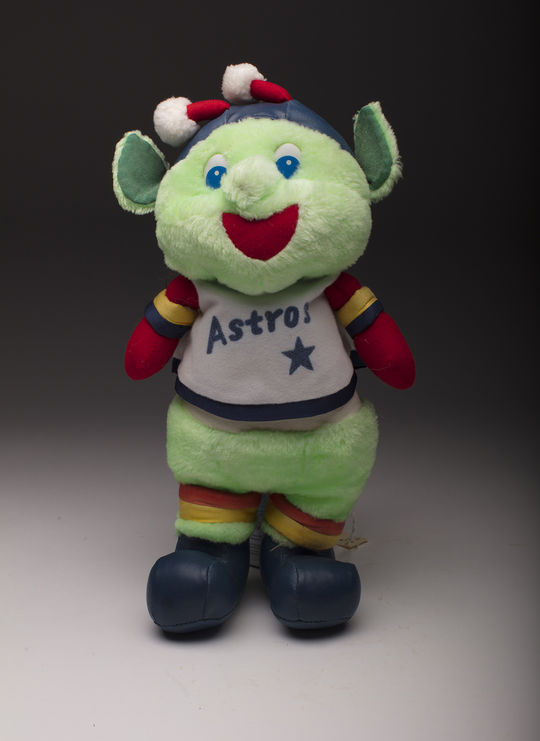 Among the two MLB mascot dolls recently donated to the Hall of Fame are a Houston Astros “Orbit” doll from the 1990s (pictured above) and a Chicago White Sox Roobarb doll. (Milo Stewart Jr./National Baseball Hall of Fame and Museum)

Wiles’ donation included mascots that represent 11 NPB teams and two MLB teams. Many of the mascots have similar traits of American mascots. Slyly, the mascot for the Hiroshima Toyo Carp, features fluffy hair similar to that of the Phillie Phanatic.

The mascots go well beyond their appearance, though. Museum registrar Peyton Tracy investigated the NPB mascots and found numerous relationships between them.

“The Nippon Professional Baseball mascots are very different from how we have our mascots here I found,” Tracy said. “We’ve got the two from the Yomiuri Giants, and they’re part of a whole family.”

Mr. Giabbit and his daughter Vicky were the two Yomiuri Giant mascots included in the donation. The family totals six members including twin siblings, Mr. Giabbit’s twin brother and a grandfather.

While some MLB mascots have been introduced with parents, such as Wally the Green Monster and his mother Momma Monster, NPB mascot’s relationships extend to opposing teams. Tracy noted that the bird-like mascot Zu-Chan of the Chiba-Lotte Marines, included in the donation, has a ‘crush’ on Buffalo Bell of the Orix Buffaloes.

Buffalo Bell was the result of a merger between two mascots who were included in the donation, Neppie and Buffy the Buffalo. They merged when Orix Blue Wave and the Osaka Kintetsu Buffaloes became the Orix Buffaloes in 2004.

The two MLB mascots included an Orbit doll from the 1990s and a Roobarb doll, the short-lived mascot of the Chicago White Sox in the 1980s. Orbit is the prime example of a mascot that interacts with fans and players. When the Houston Astros hosted the Tampa Bay Rays in 2017, Orbit and Rays pitcher Chris Archer battled in a prank war. But even then, Tracy noted MLB mascots do not have the relationships the NPB mascots have between each other.

“But it’s just like relationships between mascots that just don’t exist in our baseball like, ‘Oh yeah, they’ll be friendly, or they’ll goof around at the All-Star game,’ something like that, but nothing like the sort of relationships, stories and narratives that get built up between these (Japanese) teams. It’s really different,” Tracy said.

The unique collection of NPB dolls pairs with the Museum’s current collection of mascots. The Museum's collection includes a full costume of the Philly Phanatic, Wally and Youppi!, the retired Montreal Expos mascot. 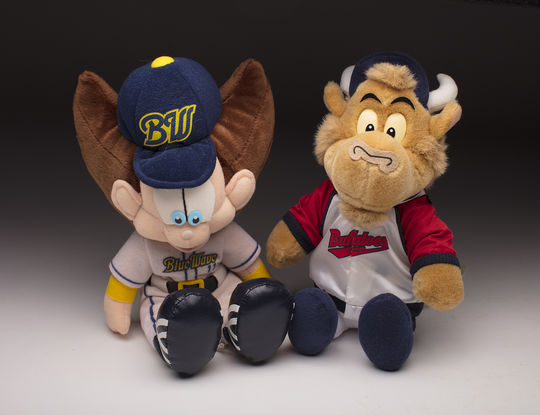 Pictured above are NPB mascots “Neppie” of the Orix Blue Wave and “Buffy the Buffalo” of the Orix Buffaloes. The two teams merged in 2004. (Milo Stewart Jr./National Baseball Hall of Fame and Museum) 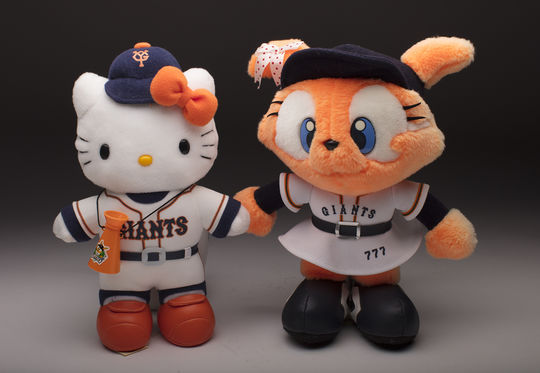 Two of the mascot dolls recently donated to the Hall of Fame represent the Yomiuri Giants: a Hello Kitty doll in a Giants uniform and a mascot named Vicky. (Milo Stewart Jr./National Baseball Hall of Fame and Museum)

“Sometimes you collect something, and you can certainly see the cultural value of it, but at your own home you might run out of space, which is basically what happened to me,” Wiles said with a laugh. “So [I’m] happy to support the mission of the Hall of Fame.”